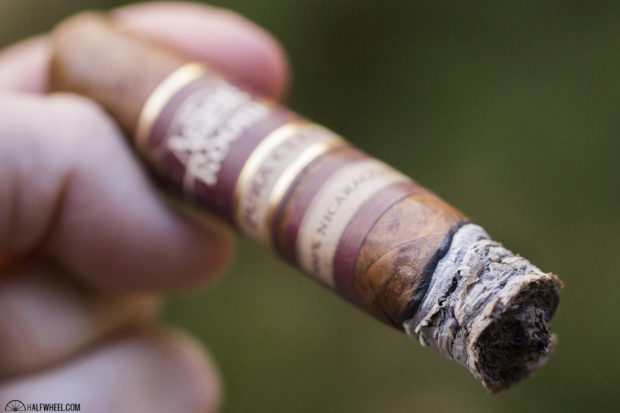 The idea of puros—cigars made from a single country of origin—is hardly a new one, yet it is one I remain very intrigued by. While there is certainly something to be said for the skill required to blend tobaccos from a shopping list of countries, I also find it quite intriguing to do a deep dive into a specific region, sometimes even down to a specific farm as has been in seen in certain projects.

While Rafael Nodal and his Aging Room brand—which is co-owned by Nodal’s wife Alina along with Hank Bischoff and Jochy Blanco—have long been associated with the Dominican Republic, he has been exploring Nicaragua more and more as of late. In particular, just before this summer’s IPCPR Convention & Trade Show he released a new line, the Aging Room Small Batch Pura Cepa. The line’s name means pure bred in Spanish, though the tobacco comes from four growing regions within the country: Condega, Estelí, Jalapa and Ometepe. 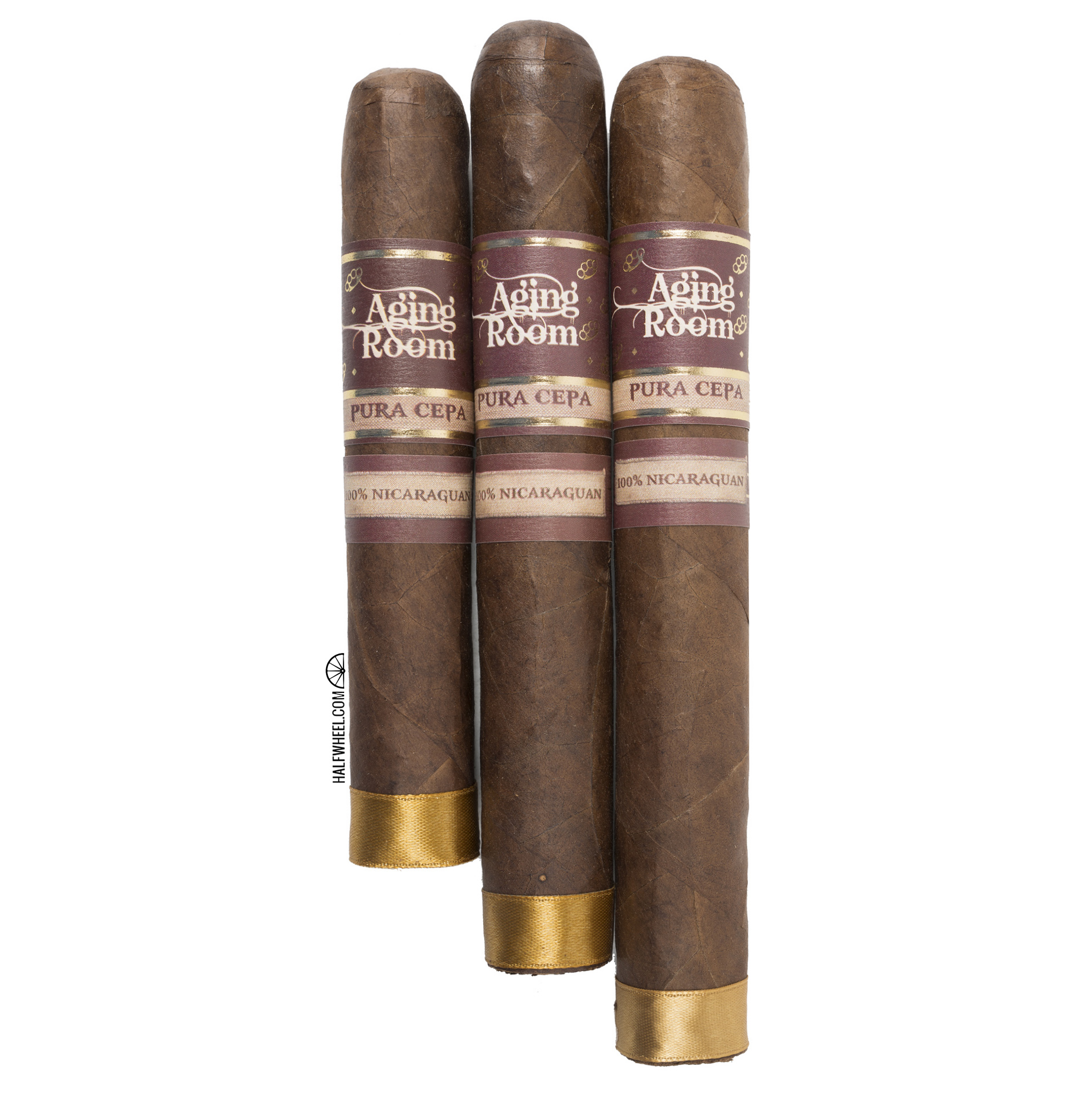 This is just the second time that an Aging Room cigar has been made outside of the Dominican Republic, the first being the Aging Room Small Batch Pelo de Oro, which was made by A.J. Fernandez. 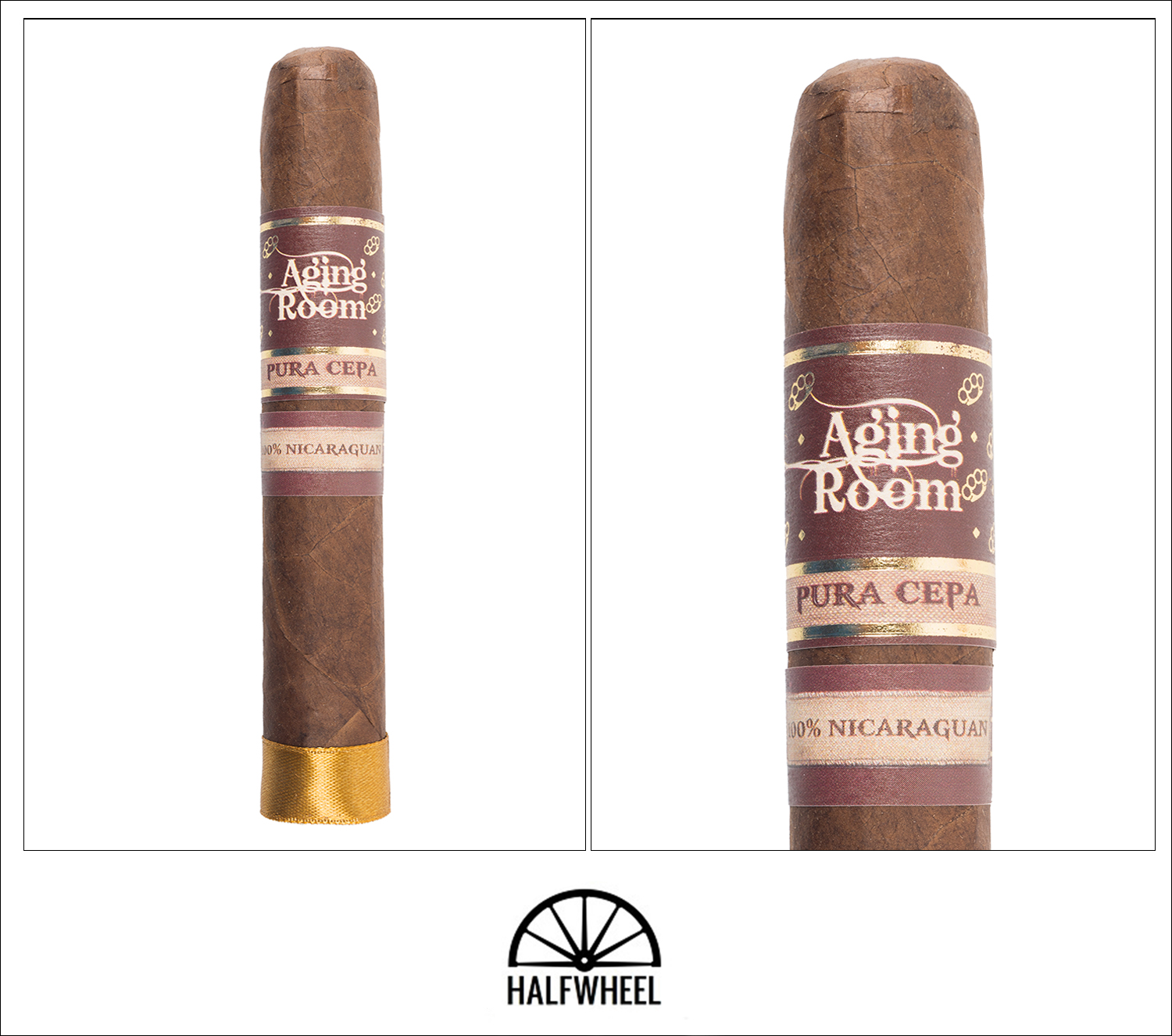 There’s a fair amount going on visually with the Aging Room Pura Cepa Rondo, from a gold ribbon footband, a secondary band that declares that the cigar is 100 percent Nicaraguan and then the primary band and its Aging Room logo, the Pura Cepa word mark, and the background of brass knuckles, which I’ve always found to be an interesting choice for the brand. The cigar itself wears a meaty brown wrapper that has a bit of mottling, a small network of veins and a texture that varies from slightly oily to slightly dry. It’s a firmly rolled cigar that offers just a bit of give amongst the three samples, none enough to be concerning on either end of the spectrum. The wrapper has a bit of pepper on top of sweet sausages, while the foot ramps up all three of those components, though the oily, almost fatty sweetness is definitely distinctive and not along the lines of the typical fruit, floral or candy notes. The cold draw doesn’t generally repeat those flavors, however, instead offering a dry table pepper that doesn’t deliver much physical reaction beyond some initial tingle. One sample gets close to meatiness, and it’s the best of the three samples.

The Aging Room Pura Cepa Rondo starts with some seeming restraint on the flavor, as the pepper, dry tobacco and wood flavors seem to want a gradual buildup rather than kicking down the door. Instead, there’s a bit of plain cake donut and condensed milk sweetness that offers an impressively enjoyable flavor for a few puffs before the aforementioned trio show more muscle. Early retrohales have an appreciable amount of pepper in them, tingling at first pass but not lingering. There’s some tangy wood developing by the one-inch mark, and the cigar seems to want to make it known fairly quickly that it has a good bit of depth to offer. The pepper makes some quick increase in strength ahead of the second third, particularly through the nose, but it remains very clean and crisp. The burn has been solid and smoke production plentiful. 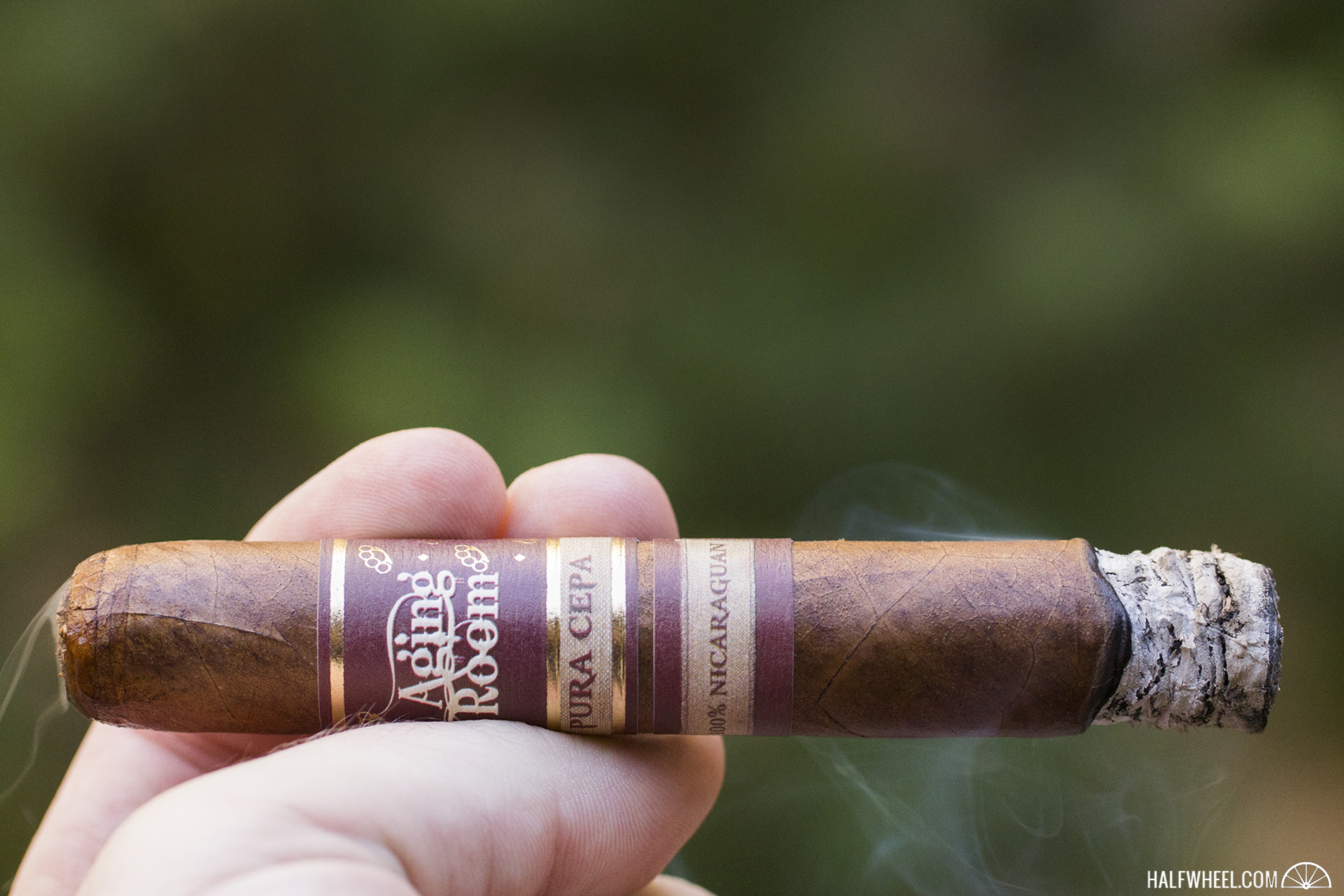 Pepper is the most prominent note that carries the Aging Room Pura Cepa Rondo into its second third, but I’m hesitant to call it a peppery cigar. While it’s leading the profile, it’s not dominant and if anything some of the cleanest pepper I’ve come across in recent memory. It doesn’t quite become singular, but the backing flavors pull a quiet exit, leaving it nearly on its own other than some lighter tobacco flavors and just a bit or very subtle earth. At the midway point, I find myself contemplating just how smooth and refined the Pura Cepa’s blend has been; while it’s not jumping with flavors, it is delivering them in measured amounts with every puff, balancing the components in near perfection. Once the burn line gets into the back half of the second third, there’s a bit of warm cola on the finish, though without outright sweetness coating the taste buds, instead, that duty falls to a bit of warm honey. That cola sweetness extends to the aroma a bit as well, though increasing pepper fights for the lead sensation with a bit of damp wood behind both of them, but it is definitely a change. The burn line, draw and smoke production continue to be fantastic, with only the second cigar showing any combustion issues, which I’m beginning to believe may be due to the very humid night on which I smoked it. 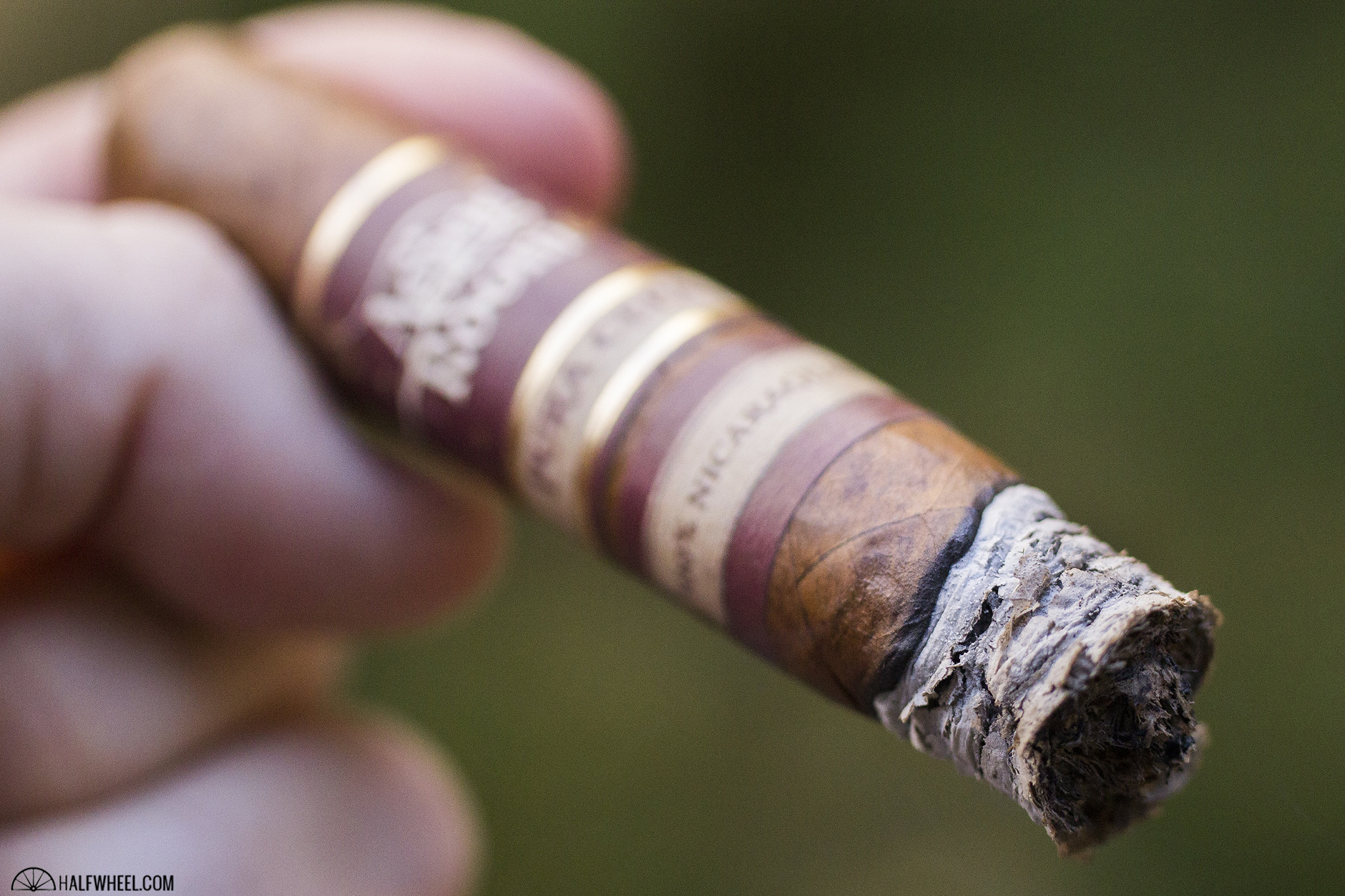 The final third begins with some more pronounced pepper in the profile, though its best effects are felt on retrohales. The palate, meanwhile, shifts to a more wheat bread-forward profile, with the overall impact of the cigar a bit fuller than it has been so far. The balance and complexity of the cigar remain, though I have a harder time identifying the flavor of the final third as it is slightly sweet, slightly damp and ever so slightly earthy. Cedar seems to be the most predominant, but that doesn’t begin to tell of the depth the cigar is offering for much of this section. The pepper finally turns just the slightest bit harsh in the final puffs when there’s a touch over an inch left, an impressive example of how to keep pepper on a leash without it feeling restrained or like it’s fighting to get off of it, finally bowing to the reality of heat and proximity. 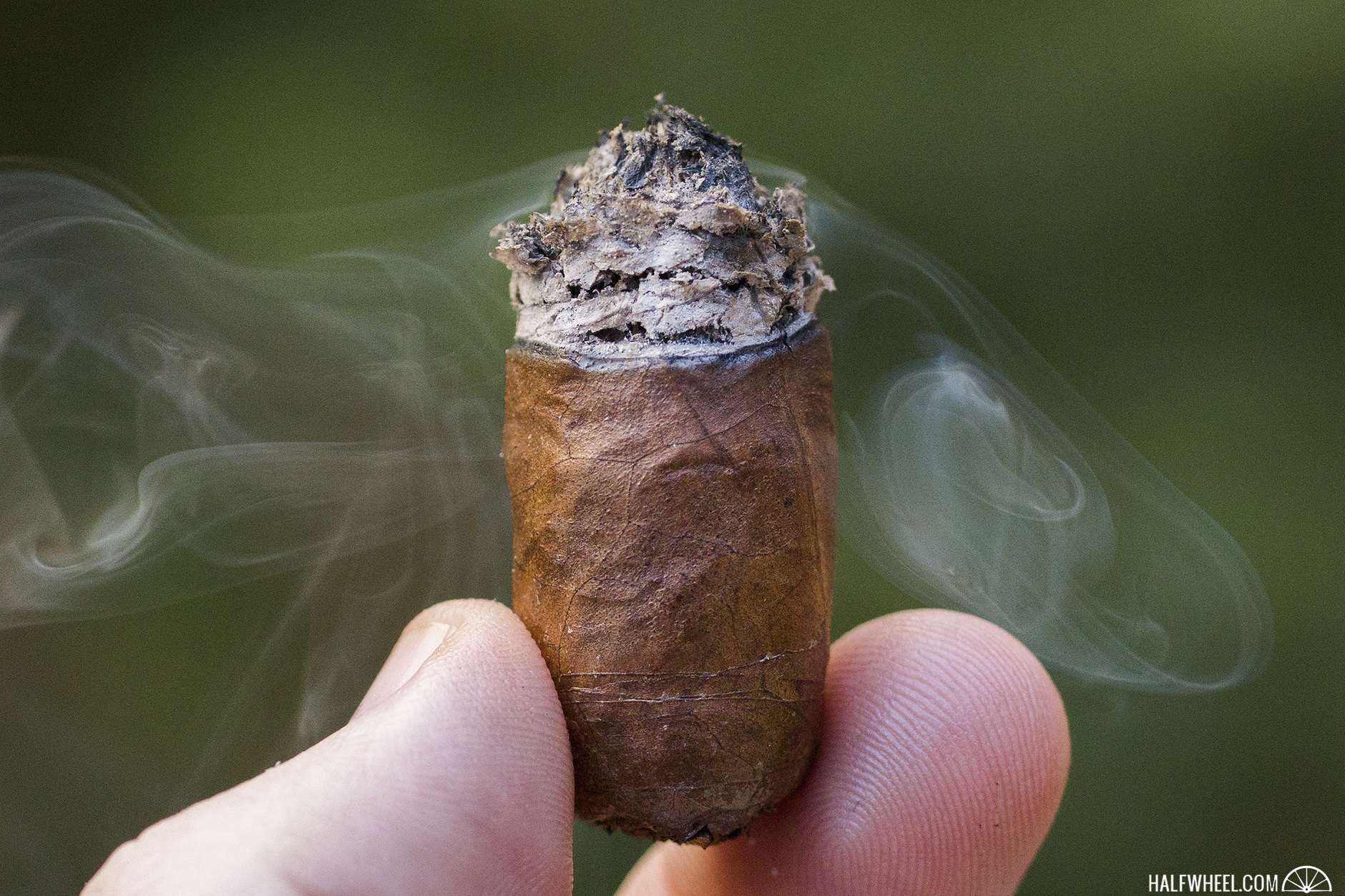 The Aging Room Small Batch Pura Cepa Rondo is an outstanding cigar, well-balanced, complex and refined. It might not be a screamer in terms of flavors or strength, but it more than makes up for it with smoothness and restraint, giving the palate enough pepper and flavor to satisfy without overdoing anything and seemingly leaving the palate wanting more with every puff. The technical aspects of the cigar are fantastic, leaving little to argue about with the cigar. It's not only one of the best Aging Room cigars I've smoked, it's one of the best cigars I've smoked this year.