In January, Brooks Whittington and I (Charlie Minato) visited Davidoff’s operations in the Dominican Republic. It was an educational trip every day, but particularly the two days spent visiting farms, processing areas and the factories themselves. We already posted our visit to a farm in Jicomé and went through the process from seedling to barn, now we pick up at Procesadora de Tabaco Palmarejo (PTP).

Davidoff’s Dominican operations fall under a company known as Tabadom Holdings, Inc. Underneath that organization are the three cigar factories, the free-trade company and PTP. As a company, PTP isn’t there to earn profits. Instead, it finances farmers that work for Davidoff, buys the tobacco they grow and then is responsible—as is implied in the procesadora part of its names—for processing the tobacco, which is then sold to the three factories.

Procesadora de Tabaco Palmarejo is located in Jicomé, which is located about 15 miles west of Villa Gonzales, where Davidoff’s cigar factories are located. The building itself is somewhat reminiscent to the factories with the white walls and gold Davidoff logo. Before being stacked in pilones, hands of tobacco are fumigated 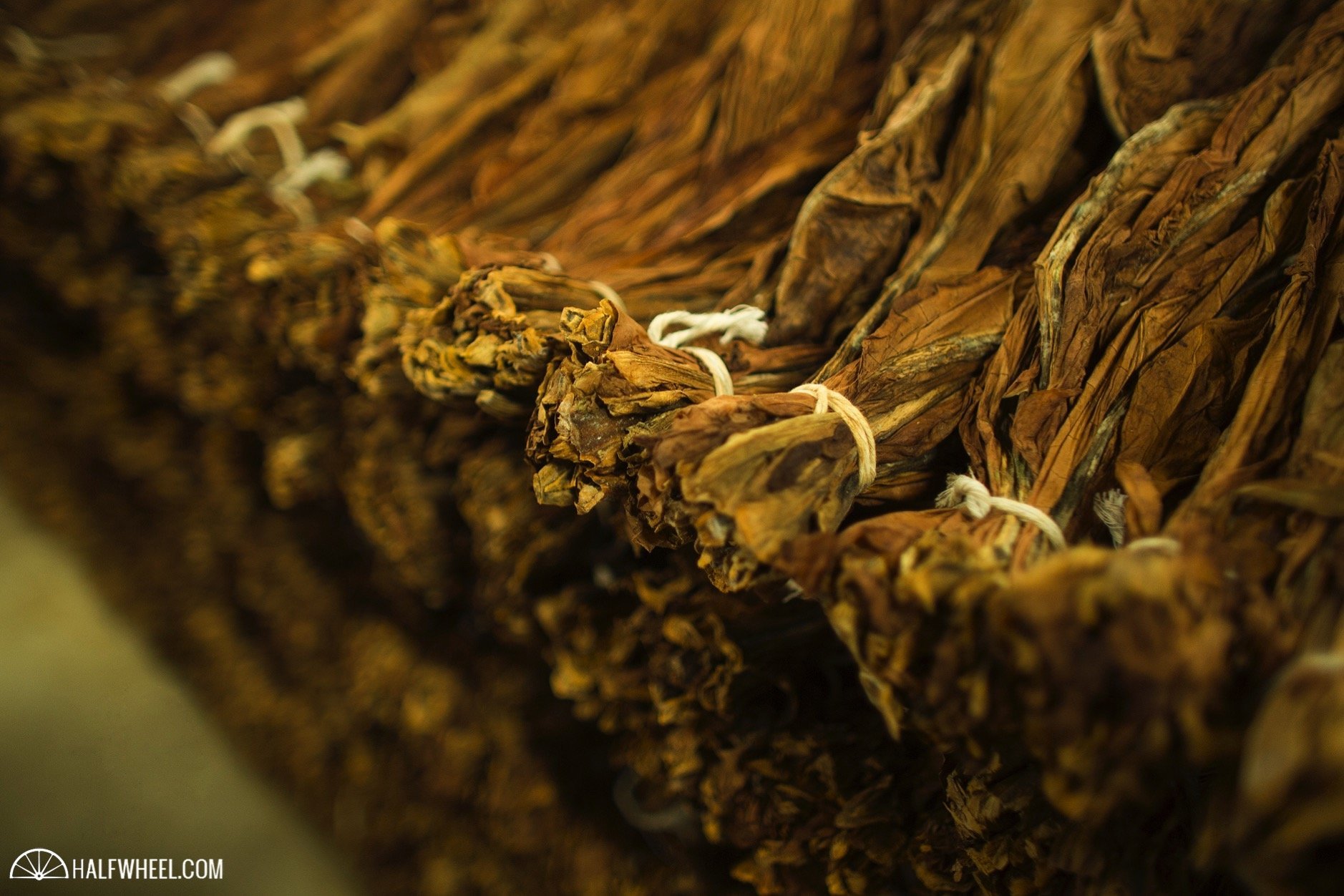 The hands rest in pilones. Tobacco is organized by how it comes into PTP from the farms. This means tobacco should share seed varietals, lot and harvest time. 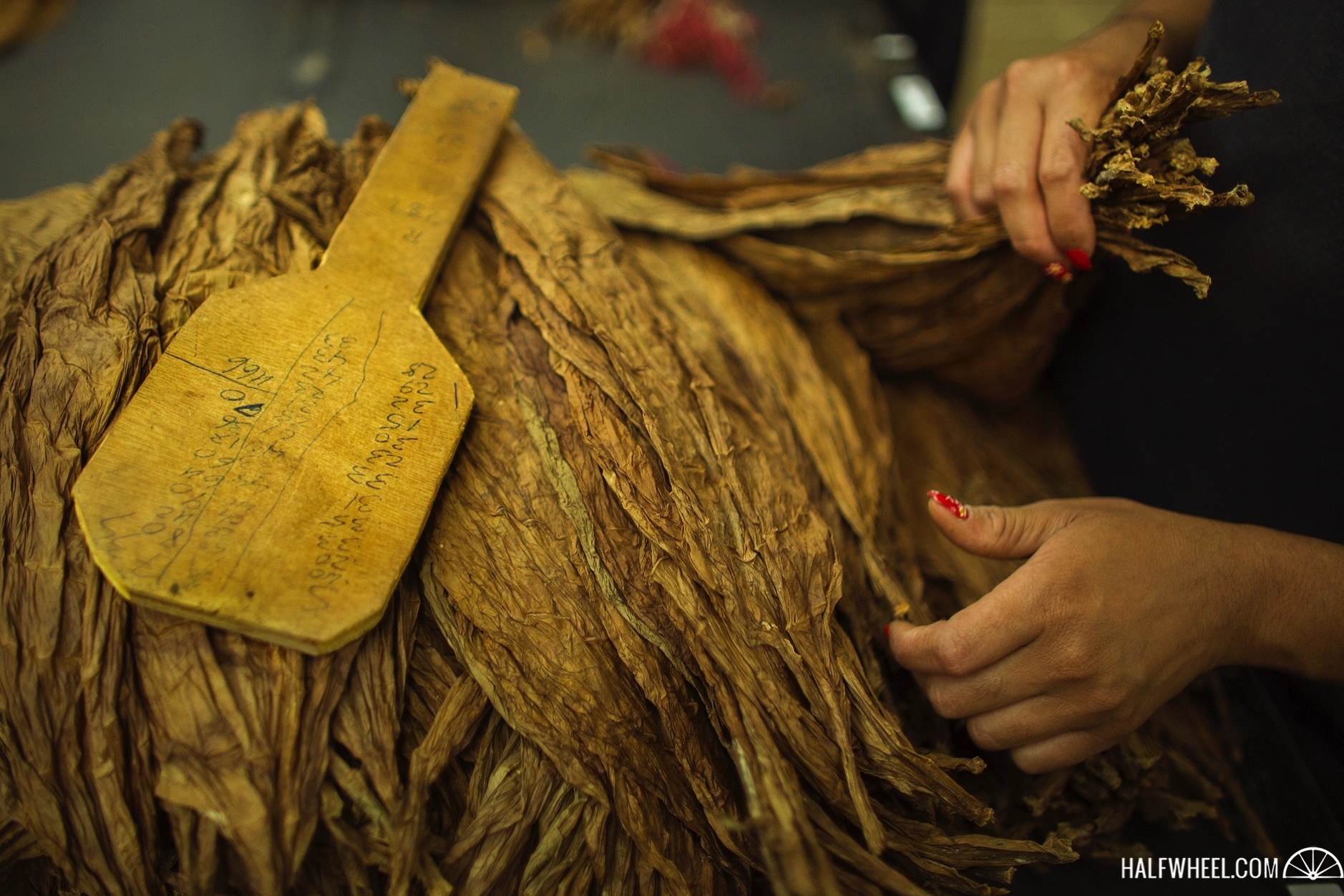 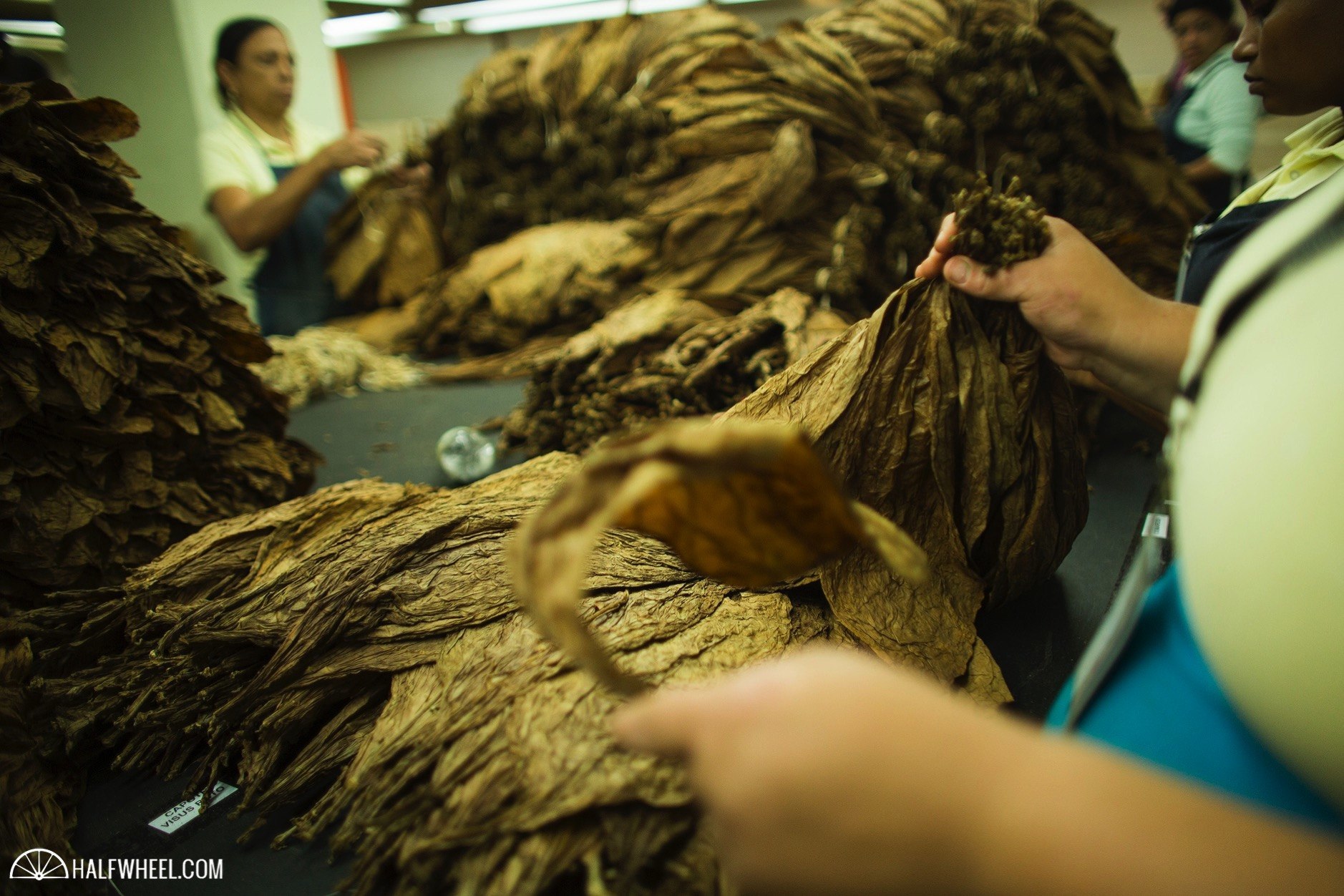 After processing in pilones tobacco will be sorted in different ways. Here a worker is creating hands of capote, binder. Tobacco has to have a certain amount of moisture in it so that it can be opened up to be inspected for color and any defects. 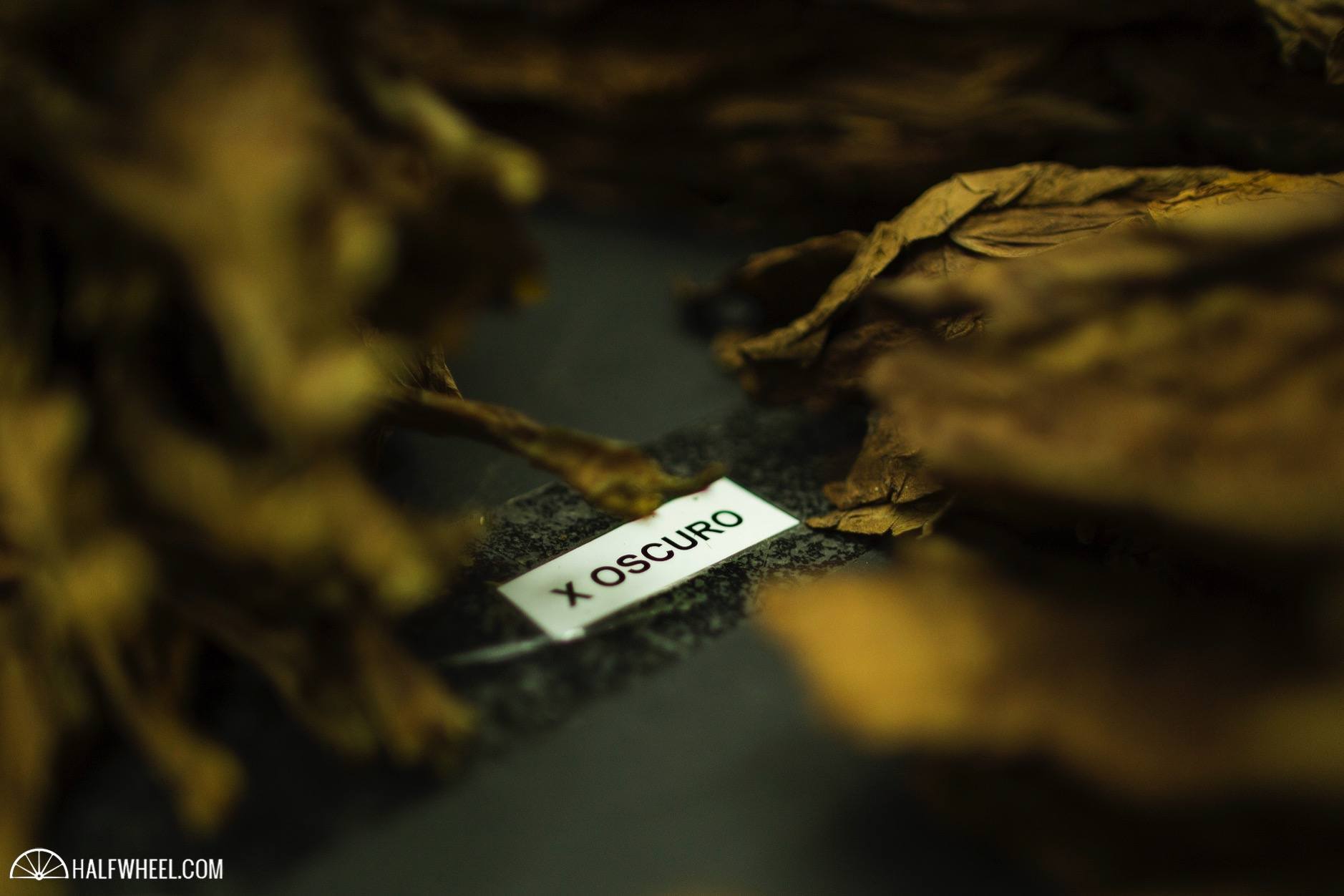 In addition to be grading by its use, color sorting will also begin to take place. Many hands touch the tobacco goes into cigar, in this case—it’s time for a bath. 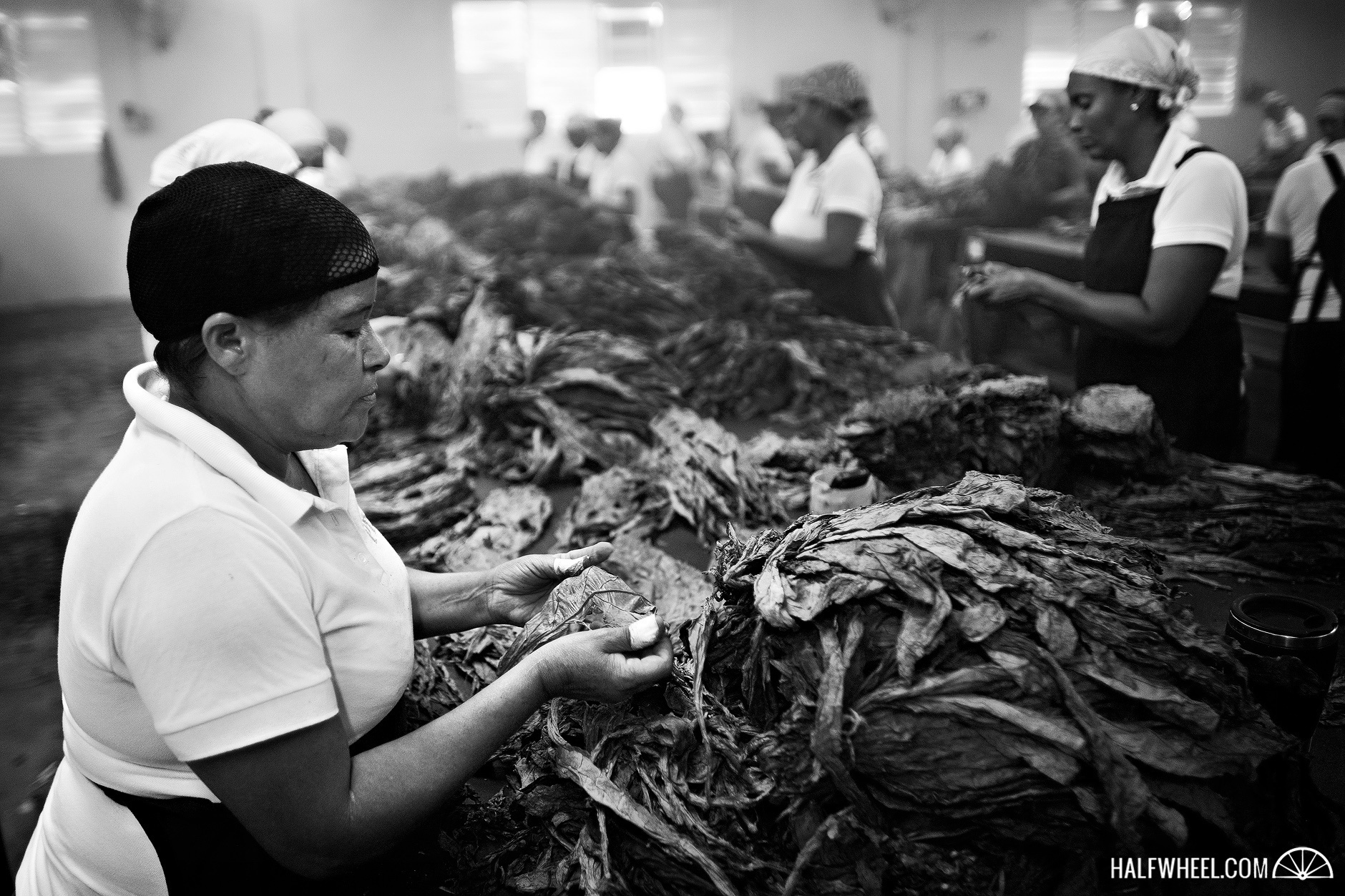 Women are preferred for sorting for a variety of reasons. They are generally much more careful with the tobacco than men, meaning less breakage, but they are also usually better at the various task. Here tobacco is being graded best off its texture. Once the tobacco has completed processing and sorting it is placed into bundles which contain information about the varietal, lot and age. It’s also barcoded.

From there, it’s off to the factories. The tobacco will continue to be stored in bales until it’s ready to be used to actually roll a cigar, but more on that in a bit.