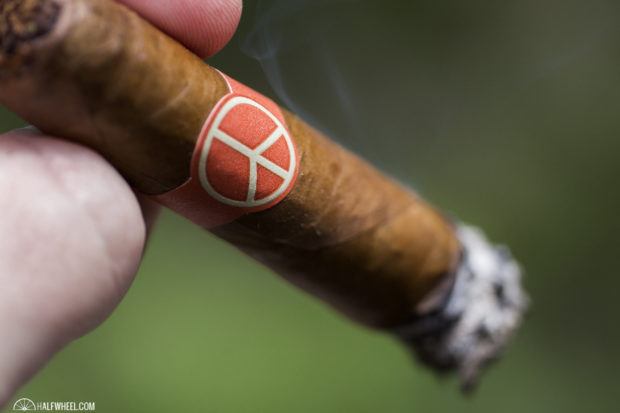 One of the things I don’t get to do often enough is dive into the history books of the cigar world, though every once in a while I will find myself with not just a cigar and some free time, but also something that chronicles the cigars that once graced the shelves of retailers but for whatever reason, have been discontinued from regular production.

Some are forgettable, of course, while some are highly sought after for high praise or limited production, and I’m sure some for their historical nature and others as an investment to be sold down the road. Then there are a handful that are remembered for something else, often an intangible, that lead them to achieve cult-like status among cigar enthusiasts.

It’s in the last category that it seems the OneOff line falls.

Originally launched in the early 2000s by Andrea Molinari, who operated the Cigair lounge and restaurant in Milan, Italy. OneOff was born out of an attempt to get a cigar brand of his own made in Cuba. After exhausting seemingly every possible avenue, Molinari eventually turned his attention elsewhere, eventually connecting with the Plasencia family to create his cigar at the Segovia Cigars S.A. factory—now known as Plasencia Cigars S.A.—in Nicaragua.

The cigar became iconic for its simple packaging and banding, an orange-ish piece of paper bearing simply an off-white peace symbol, with the boxes plain and bearing the same symbol on a sticker with the word ONEOFF printed beneath it.

Giolito purchased the line from Cuban Crafters in 2017, though he also tried to acquire the trademark in 2011 before ultimately abandoning that particular effort.

While the relaunched OneOff line will still be made at Nicaragua, it now comes out of the Tabacos Valle de Jalapa S.A. (TABSA) factory, using all Nicaragua-grown tobacco from AGANORSA. Giolito knew Molinari “on occasion” and said he understood his vision for the cigar, which formed the basis for the relaunch of the brand. “I took that same ideology, or the spirit of what he wanted to create,” said Giolito, adding that he was able to add his fingerprint to the relaunched brand based on the tobaccos available to him. 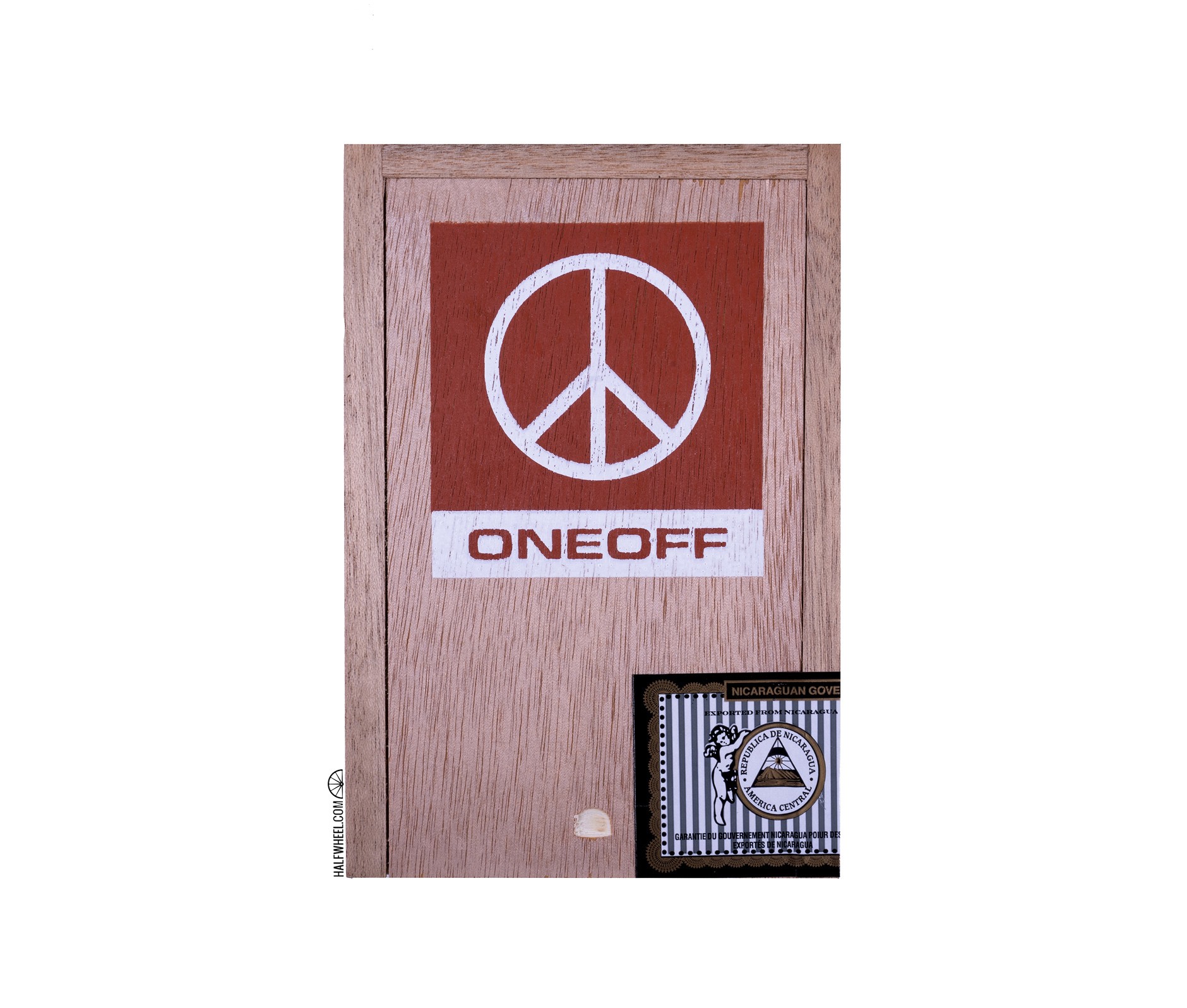 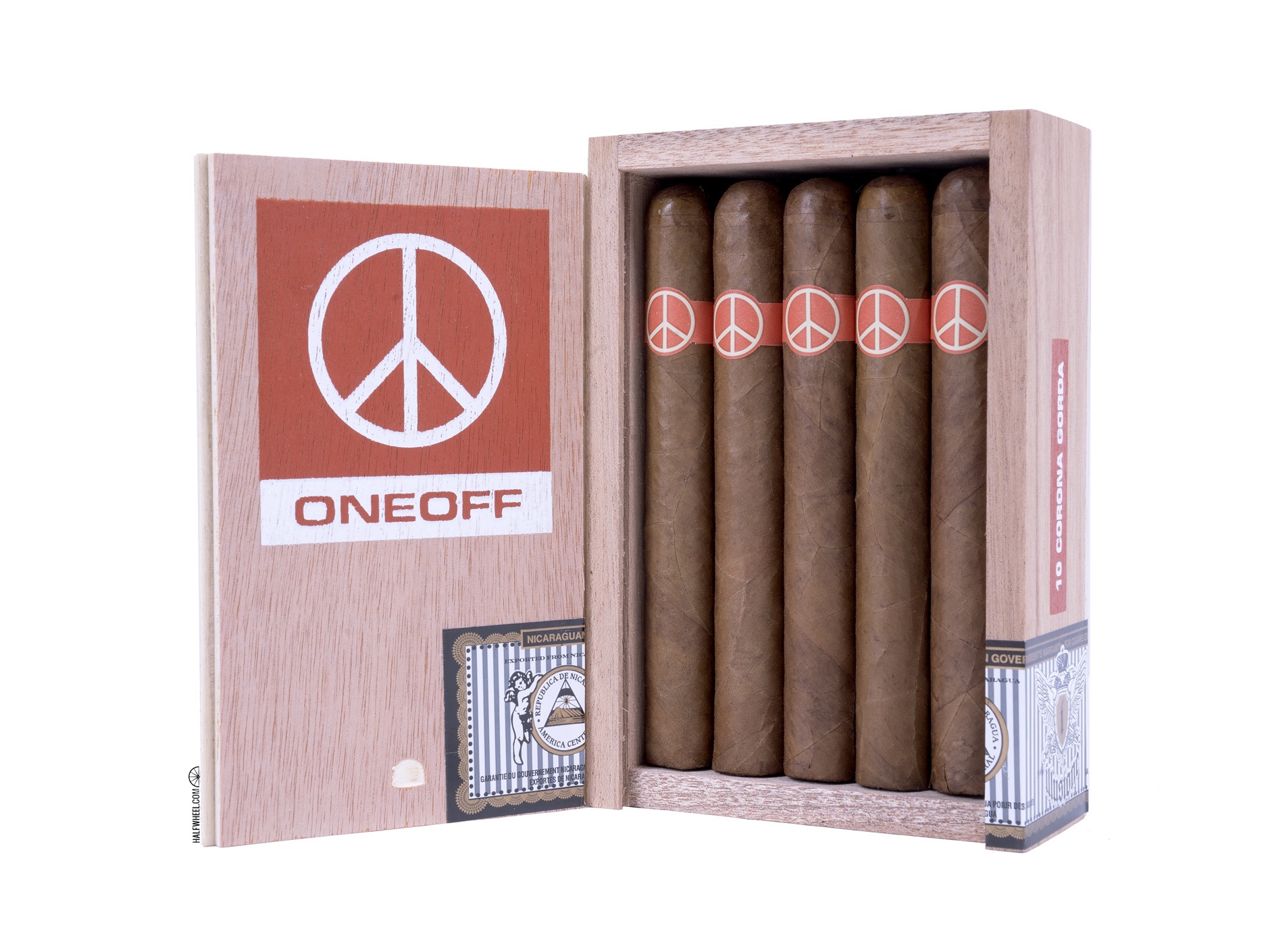 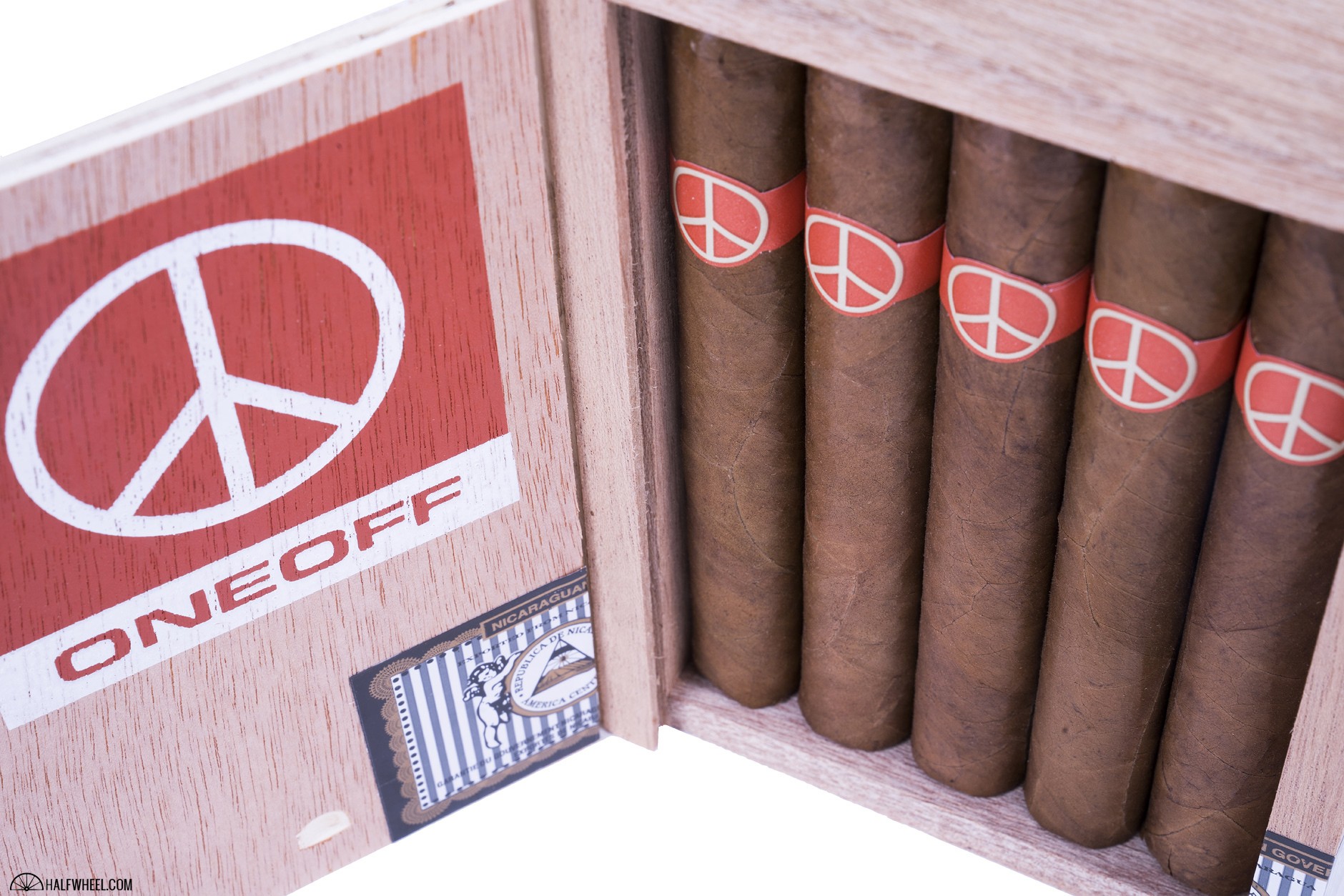 It is returning in eight sizes, seven of which began shipping in early June as part of a pre-pack offer of three boxes of each of the eight sizes, meaning the initial total production would number 120,000 cigars, though it is ultimately a regular production offering.

At the 2018 IPCPR Convention & Trade Show, Giolito said that +53 Super Robusto is “a little different” than the others, though declined to go into any specifics. Shipping for that size is slated to begin in August. 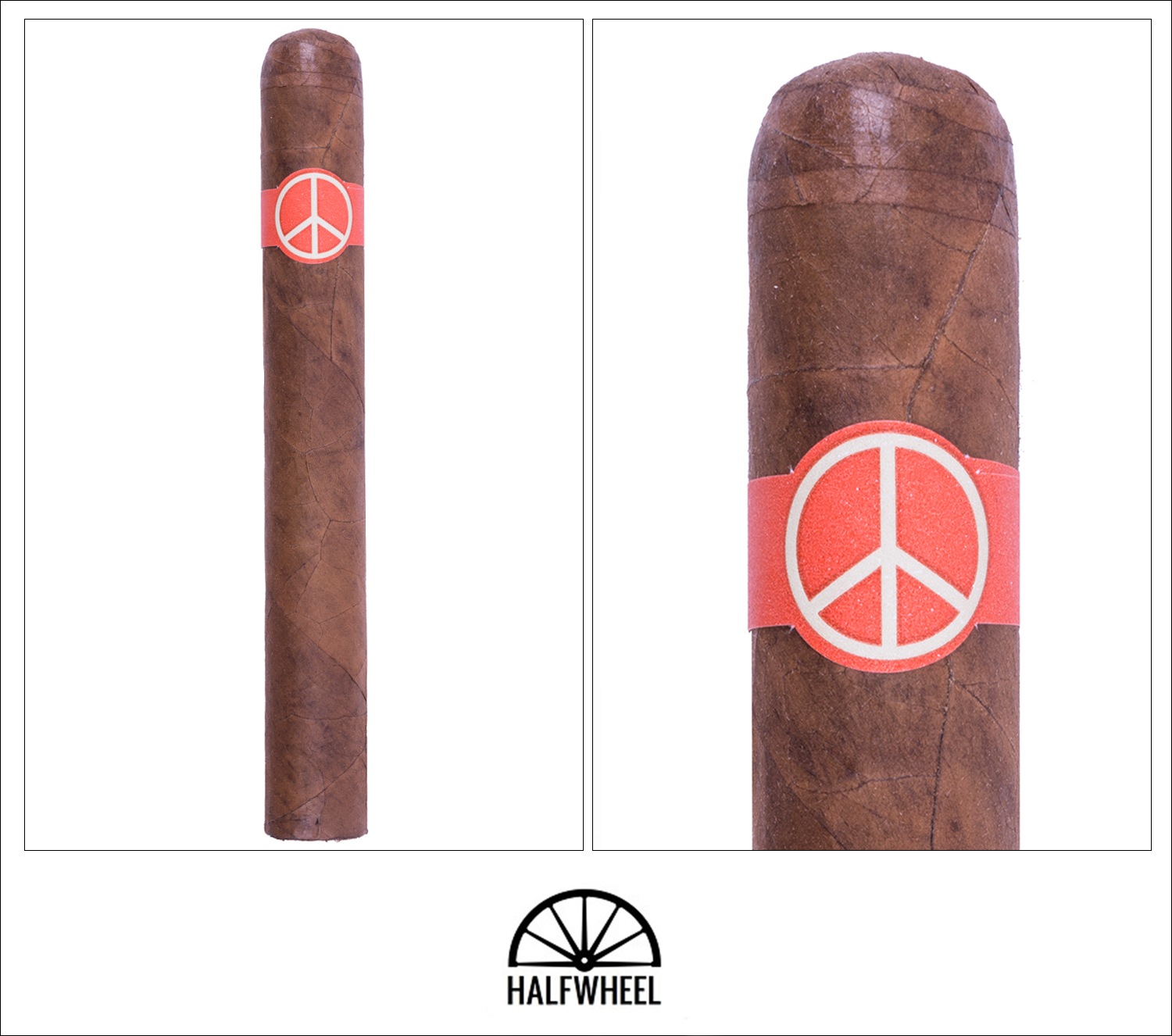 Having smoked a handful of both the original OneOff and the Cuban Crafters-owned version, I feel a good bit of nostalgia looking at the band, with its peach-colored background and off-white peace symbol. I’d be lying if I said I can remember exactly what it tasted like, other than that I recall enjoying it, so don’t expect any comparisons to the original. The cigar itself is fairly firm and well rolled with the occasional visible seam, no bumps or soft spots, and generally well-applied caps. Some of the wrappers have a surprising amount of sheen to them, almost dripping oils in some spots, while others are a bit more restrained in their glossiness but make up for it with a somewhat oily texture on the fingers. The foot of the OneOff Corona Gorda offers a thick, chewy aroma that is sweet and leaning towards breads or pastries, with some cappuccino foam and coffee mixed in with just a bit of pepper on the tail end. The cold draw ranges from near ideal to a tick firm, and is also generally a tick sweeter, with a mix of thick breads and mixed nuts providing the bulk of the flavor that gets spun by some inherent sweetness. Only one of the three samples shows any appreciable pepper.

The first puffs of the OneOff Corona Gorda are solidly medium bodied and thinner than the flavors I got from both the pre-light aroma and cold draw. There’s a bit of a toasty take on the profile that varies in intensity among the three samples, but the general starting point is fairly consistent. The third sample adds a pepper component earlier than the other two, with table pepper present almost right out of the gate as opposed to the one-inch mark. It hits first on the tongue but quickly gets added to the retrohale as well, and while it starts out fairly smooth and mellow, picks up a bit more punch as the burn line progresses. The end of the first third sees the OneOff at its most pepper-laden, which pushes the overall profile just a tick above medium, with the flavor and body both more squarely at the medium mark. Draw, burn and smoke production have all been quite good to this point. 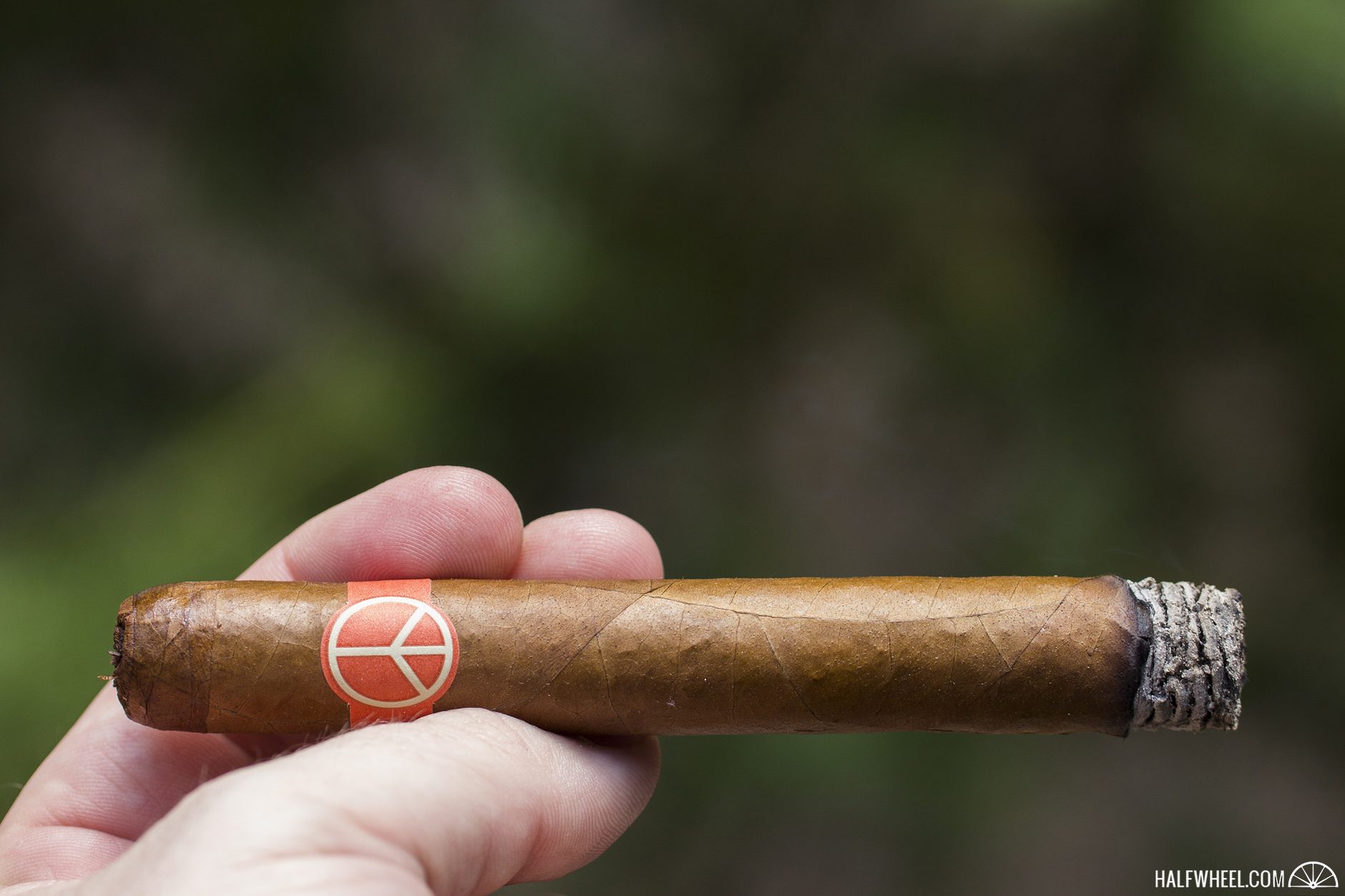 The OneOff largely stays the course entering its second third, with a light to medium-bodied smoke crossing the palate with a slightly toasty finish, along with respectable but far from overwhelming amounts of pepper. There is a certain complexity that the cigar seems to be holding back, though its singularity isn’t hard to enjoy for what it is at the current moment. Across the midpoint, the cigar shifts to a base of slightly damp wood—the first sample more so than the other two—and brings on a flavor and aroma of some fresh cut firewood. There is still some pepper present, as well as a newfound bit of bite from the wood, although neither seems to nudge the cigar to a fuller strength level. The draw is quite good, and while not billowing with smoke, there’s a sufficient amount to be had. 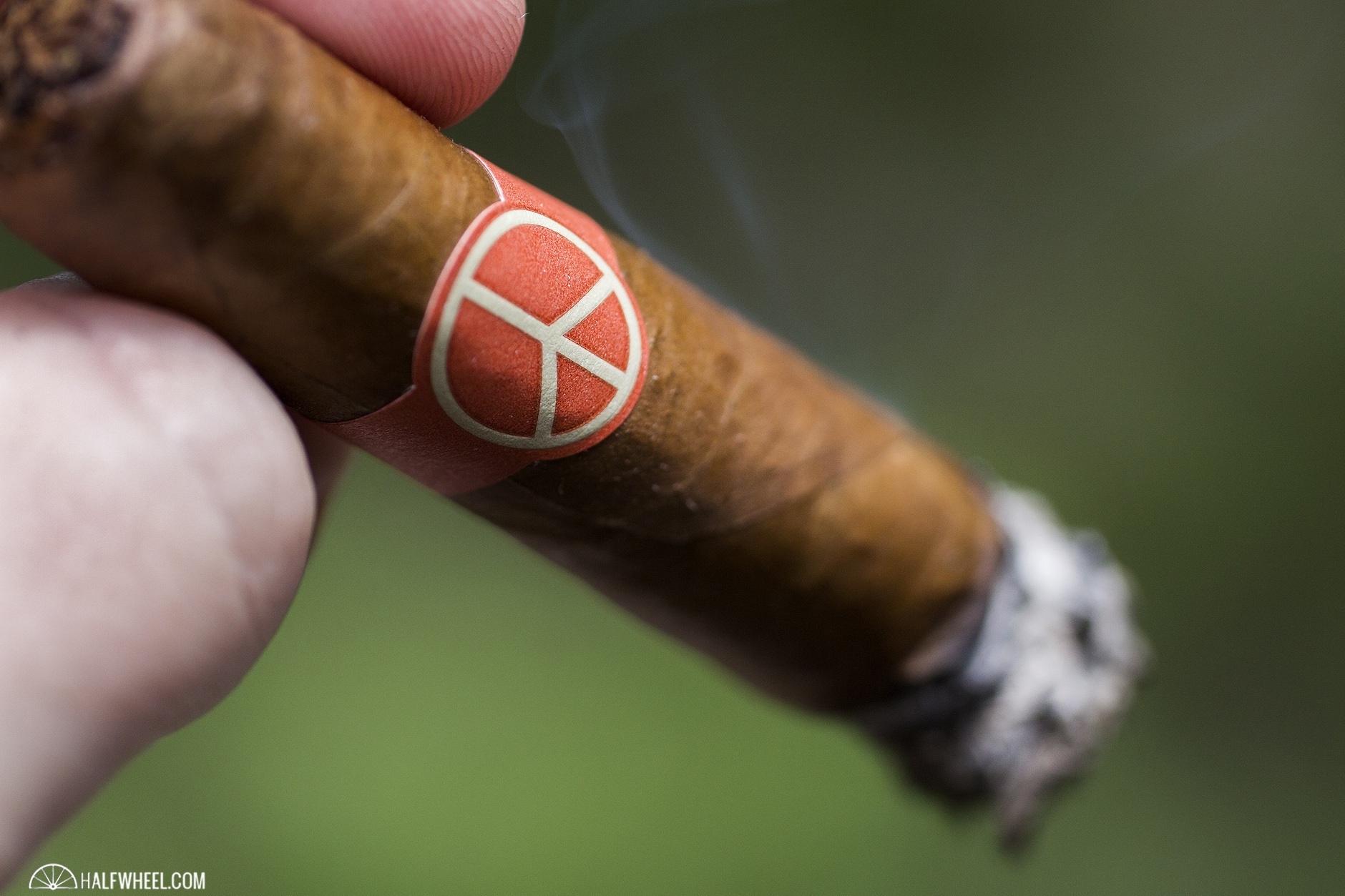 The final third is the most confounding of the three, both for the variance and what individual samples do on the palate. In the first sample, the flavor turns rough on the palate fairly quickly, as it seems like the band had been shielding the cigar from any adverse flavors. The second cigar doesn’t get near that kind of change, instead becoming a bit sweeter by way of pastry frosting or glaze style sweetness, at least until the band comes off and it starts to pick up a harshness that is hard to put a flavor to but simply does not sit well in the back of the mouth and tongue. The variance in the final third’s flavors affects how far down I smoke each sample and what my parting thoughts of the cigar are, though each one burned down quite well with no complications as to air flow, burn line or smoke production. 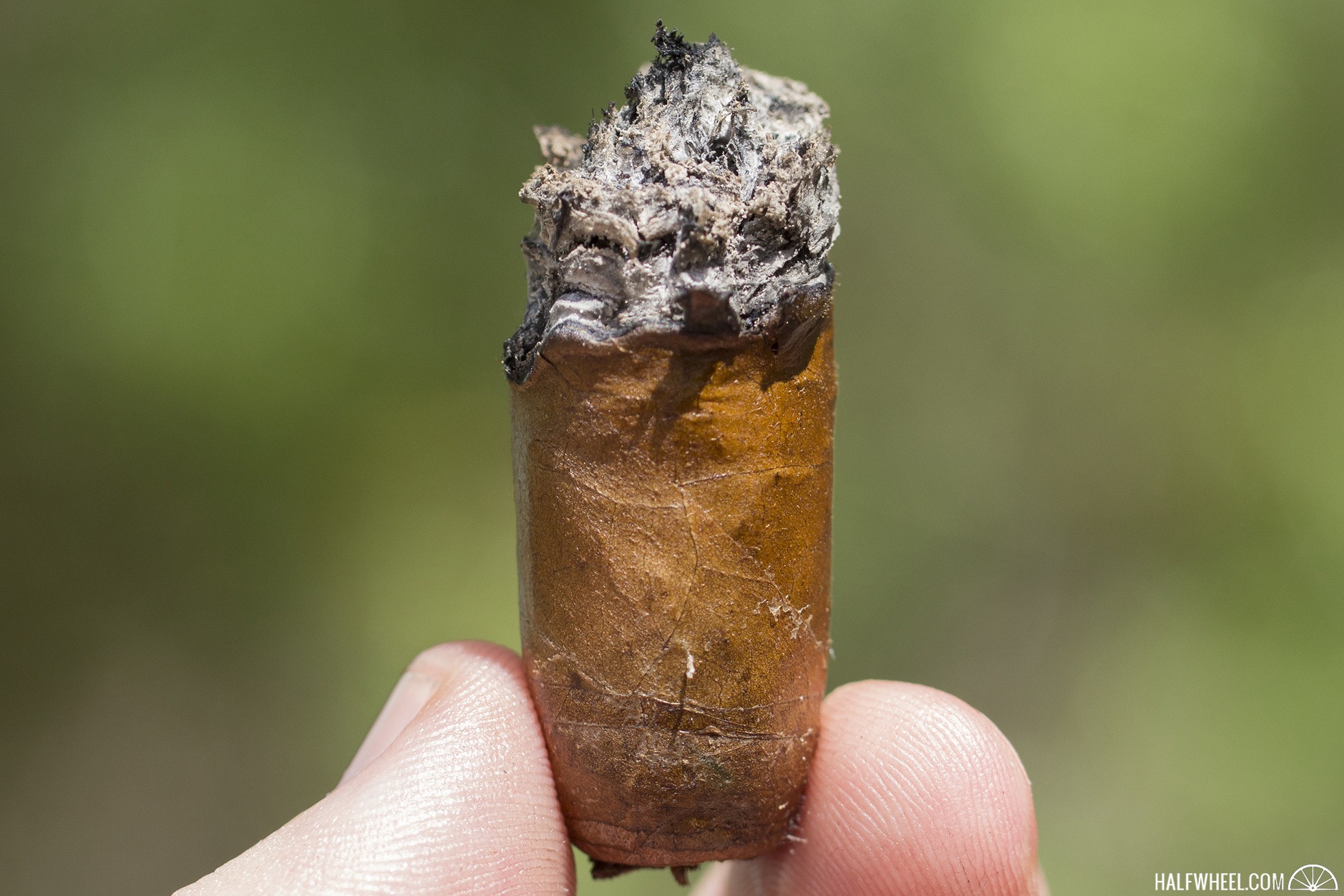 I wasn’t sure what to expect from the relaunched OneOff, and my reaction after smoking three of them—as well as few other sizes prior to this review—remains a bit mixed. The first two thirds are quite enjoyable yet seemingly withholding some complexity and depth, while the final third derails the flavors with harshness that surprised me at every encounter. Those first two thirds give me hope for what this cigar can become with time and in future releases, while the final third restrains that optimism more than I'd like to admit, and if factoring in the price, makes this a bit more challenging to recommend. There are few blenders I trust as much as Dion Giolito to produce a quality cigar, so I have to think the OneOff will come around in due time, hopefully it does so in such a way as to justify the price being asked for it.