Some of the more prominent cigar YouTube channels have lost their ability to generate ad revenue through YouTube’s own ad service, a process known as demonetization.

Some of the most popular YouTubers, not cigar-related, have been demonetized for various reasons, largely due to controversial videos or comments regarding race, religion or politics. Large corporations have removed their ads from YouTube entirely after finding their ads running on these types of videos. In response, the Alphabet-owned YouTube has become increasingly aggressive when it comes to what types of videos cannot have ads automatically hosted on them.

YouTube’s policy regarding what videos can be demonetized includes those types of controversial videos, but now also includes videos that promotion of tobacco products—including e-cigarettes—and firearms.

Yesterday, Bryan Glynn of Cigar Obsession, the most prominent cigar YouTube channel, announced he had been demonetized.

A week ago, Glynn’s videos were marked as “limited” in terms of their ability to display ads. This wasn’t entirely, he said that from time to time Cigar Obsession videos would be flagged, he would appeal and then they would be unflagged.

“The system not only is scanning back libraries and applied this to the vast majority of my existing videos including the #1 on YouTube ‘How To Smoke A Cigar’ last month, but videos are automatically flagged on upload even before they are made public. There’s now no chance for any direct income from new content.” 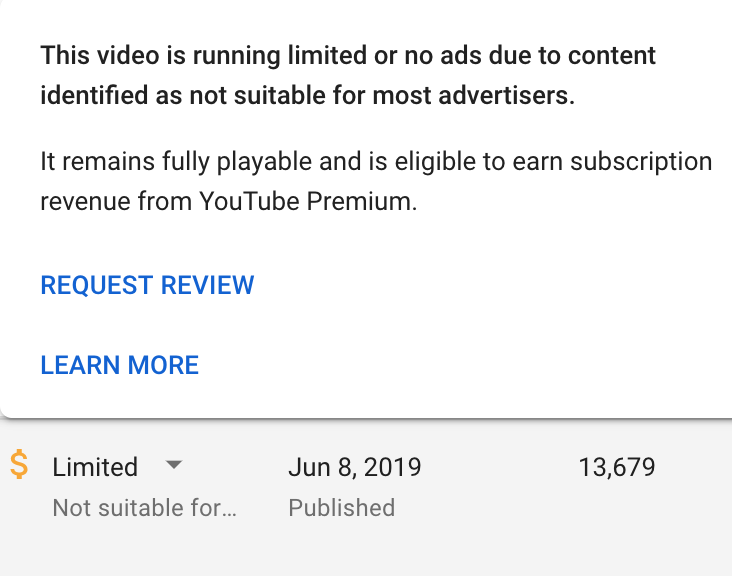 The change doesn’t mean an end to all revenue based on cigar-related YouTube videos but it does mean an end to revenue from YouTube. These channels could make money by directly selling sponsorships or by using Patreon or other premium content platforms. However, for viral videos like the How To Smoke a Cigar one referenced by Glynn, the ability to continue to generate new revenue from popular content that was published years ago is likely entirely gone.

While the ban on advertising for cigar-related content is an official, sitewide policy; YouTube’s enforcement is not. Glynn said he knew of two other channels losing their ability to host ads, but so far only Should I Smoke This has also publicly acknowledged getting demonetized.

Cigars Daily, another popular cigar YouTuber, tells halfwheel its videos have been demonetized within the last 48 hours.