Title of a Daft Punk track, yes, but also seemingly the trend of a number of cigar accessories in recent years. In particular, XIKAR has released a collection of accessories under the header of being high performance, and in particular a quad-flame lighter called the HP4 and a new blend of butane fuel designed to be both better at high altitudes than the standard version, as well as capable of helping lighters on their last legs get a bit more life. 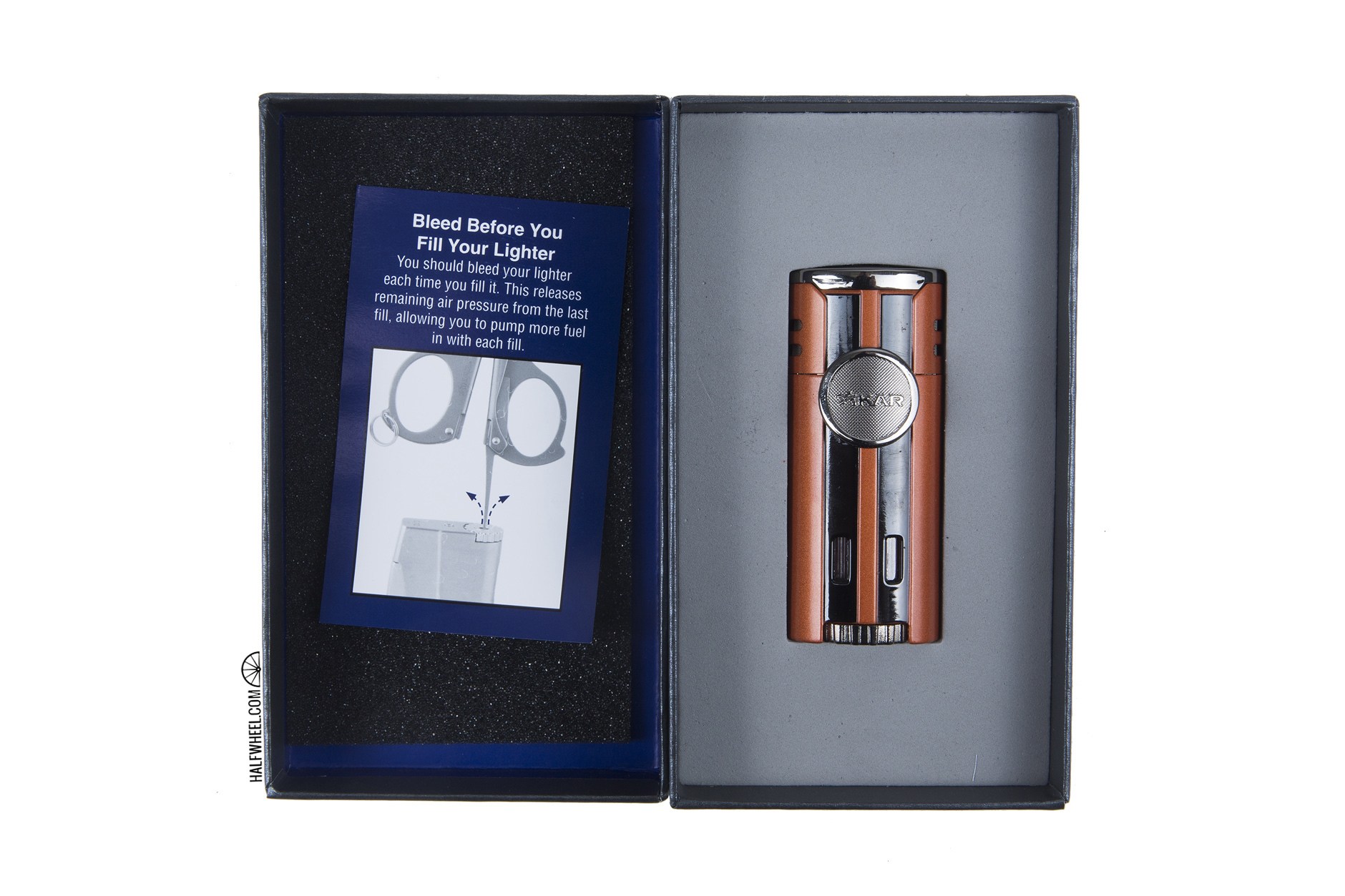 As for the HP4, it pushes the envelope of delivering copious amounts of fire and remaining pocket friendly, While lighters of this capability were often relegated to table lighters, XIKAR has found a way to pack four torch jets, arranged into a diamond design with each jet angled to create a single point, into an oval cylinder that is about 3.3 inches (84mm) long, 1.4 inches (35mm) wide, and 1.2 inches (30mm) thick. It’s certainly pocket-capable, and most likely pocket friendly for anything except skinny jeans, though I found myself generally keeping it in my travel humidor. In XIKAR’s five-count version, it’s a bit snug and takes up a good amount of space, but in the bigger options it’s nowhere near as much of an issue.

Keeping in line with the race car-inspired theme of the HP series, the XIKAR HP4 features a pair of racing stripes on its front side and plenty of silver/chrome accents to bring everything together, while functional features include an oversized flame adjustment wheel on the base of the lighter and dual red-tinted EZ-View fuel windows on the front. One of the more interesting aspects of the design is a ridged texture on the backside of the lighter to provide some extra traction and grip while using it. It’s sizable, substantive, and sturdy in the hand, almost a dense version of a table lighter.

There are two aspects of using the HP4 that might be misleading on your first go; the first is that the lid is opened manually as opposed to via a single action; the second, that it’s a pull-down ignition, not a push button as the design might suggest.

While I had been a big fan of the single-action ignition as recently as a year ago, a conversation with an accessories company sales representative changed my mind. With flip-top lighters such as the HP4, it’s generally a very small latch that holds a spring-loaded lid in place, and each time it’s opened, that latch gets worn down a tiny bit, but over time, almost every lighter will wear down and the lid won’t stay closed. It’s something that can be frustrating, and in some cases leads to the return or repair of a lighter that otherwise works fine.

Once the lid mechanism is understood and you’ve flipped it up to its fully open angle of about 110 degrees—which provides plenty of space in which to light your cigar—it helps to be a bit more methodical when igniting the XIKAR HP4. By that, I mean slowing down when pulling the ignition so that the butane has an opportunity to get flowing before the ignition sparks. It seems like a small thing, but the handful of failed lights I had with the HP4 were almost always a direct result of trying to be too quick to light it.

Depending on how you have the flame adjustment wheel set, you’ll get anything from a thick, sizable but manageable flame to what I would describe as a tower of fame reminiscent of what comes out of the back of a dragster as it launches from the starting line. Adjusting the flame to somewhere between those two points is done via an oversized adjustment wheel on the base of the lighter, and for a relatively boring part of most lighter, XIKAR does an impressive job giving it both form and function. Designed to look like a five-spoke wheel, the ridges on the side of the wheel make it incredibly easy to grip and turn, with clearly marked direction arrows for whether you want the flame bigger or smaller.

While I usually prefer to set a lighter’s flame adjustment wheel about halfway open, I found that with a full tank of butane in the HP4, I could get a very usable flame from the lighter at its lowest setting. While it’s generally not good practice to use a lighter with the flame adjustment wheel either all the way open or all the way closed, the fact that I was able to get a good flame at the lowest setting was remarkable, as most lighters will barely produce a fleeting flame.

As such, I generally used the HP4 with the wheel only about a quarter of a turn up from the lowest setting as I found that going much more open than that was too much flame not only for the thinner ring gauge cigars I generally smoke, but also because the heat results in such a rapid change in the state of the tobacco that I have to think it’s not particularly good for the tobacco and its flavor.

At its most open setting, the XIKAR HP4 pumps out a huge, roaring flame, with the jets sputtering at times, seemingly unable to keep up with the request for butane It’s the kind of fire power that seems best suited to lighting an 80 ring gauge cigar stuffed with thick ligero from a foot away. The phrase drinking out of a fire hose seems to be quite appropriate here, particularly if you find yourself needing to relight the final inches of a cigar. 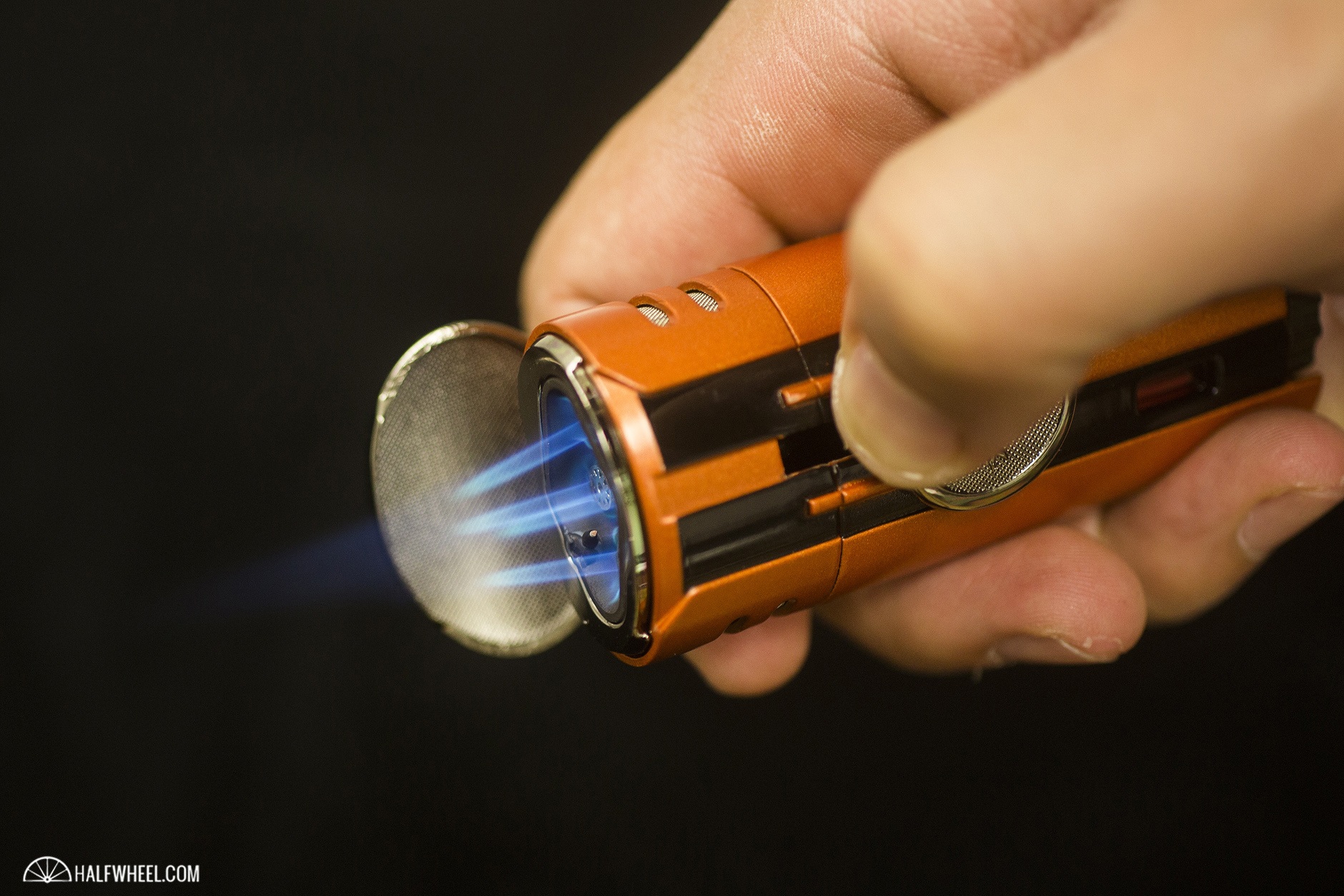 With whatever setting you go with, you’ll want to exercise some additional caution and mindfulness when using the HP4; unless you’ve been using some of the more powerful lighters on the market lately, or a blow torch is part of your repertoire, you’ll find that the four flames put out a sizable blue and orange product. You’ll also want to get the lighter a bit farther away from the foot of the cigar so as to not to absolutely singe the foot. Likewise, I also would advise pointing the lighter away from the cigar and your fingers when firing it up, just in case the flame is bigger than you anticipated. Nothing ruins a cigar like accidentally burning your fingers with an incredibly hot lighter.

While I understand and appreciate the appeal of so much firepower, the goal is still the same as if you were to use matches, a soft flame, or a single torch: to gently transition the tobacco from a state of non-combusting to one of combustion, and the HP4 can do that from farther away than you might think.

It also bears mentioning that with the extreme heat that this lighter can produce, you don’t want to leave it running for extended periods of time lest you risk damage to the internals, particularly the ignition wire. If it takes you 30 seconds to light a cigar, for instance, I’d find it better to do it over four short periods of seven or eight seconds with some cooling time in the middle, rather than one extended session. XIKAR’s lifetime warranty is certainly great, but why invoke it if it can be avoided, while also probably helping your cigar start on the best possible note?

As a big positive, I have to give the HP4 a lot of credit for never getting overly hot after use. The top portion of the lighter seems to be well-insulated, and does a remarkably good job at not letting heat transfer to the body, which can occasionally be another place where a lighter will remind you of just how hot it has become. The HP4 stays quite cool, even after firing for 10 or 15 seconds.

All this said, the XIKAR HP4 does quite a good job in lighting cigars, particularly thicker ring gauges with heavier tobacco. If you are exclusively a lancero, panetela, or corona smoker, I’m going to suggest you look for something a bit smaller. Robusto and toro fans, you shouldn’t have as much of an issue, but do exercise caution. When it comes to gordos and beyond, fire away with near impunity.

Once your cigar is properly toasted, you’ll discover one of the more distinguishing features of the XIKAR HP4: the loud snap the lid makes when it closes, almost the inverse of the famed S.T.Dupont sound, both in tone and sequence.

After several weeks of daily use of the XIKAR HP4, I’m a bit conflicted; I really like nearly everything about the lighter, from the design to the build quality to the functionality, but it is simply too much flame for my needs or wants. I certainly appreciate the seeming convenience of being able to torch a cigar quickly, though I also know that many other lighters can get the job done just as well with less over-the-top capacity. Much like having that 750 horsepower engine is appealing, when daily driving calls for staying under 40 mph, it’s just dollars wasted on power you won’t need or likely use. That said, I certainly would encourage almost anyone—exceptions stated above—to at least demo the HP4. It’s quite an impressive design and lighter in its own right, and XIKAR is to be commended for it on pretty much every level.

The XIKAR HP4 is offered in five colors: black, G2, blue, Chopper Orange, and Daytona Red, finishes designed to match the colors of most any car enthusiast. Each color comes with an MSRP of $119.99.

The lighter used for this review was provided by XIKAR, Inc. It was also used exclusively with XIKAR’s new PUROFINE High Performance butane.