Just as spring was beginning to shift into summer this year, the cigar company Wilson Adams underwent its own rebirth with the launch of a new cigar, the Wilson Adams Mr. Wilson.

Formed in 2011 as a partnership between Brandon Wilson and Stephen A. Miller, the company released its first cigar, the Ecuadorian habano-wrapped Wilson Adams White Label in 2012. This first fruit of a relationship with Plasencia Cigars S.A. in Nicaragua was followed up by the Wilson Adams Red Label, a Ecuadorian Sumatra-wrapped cigar, in 2013.

Yet while the cigar portfolio steadily grew, the partnership dissolved in 2014, and in early 2015 it was announced that the company would be undergoing a relaunch with Wilson solely at the helm and this limited edition leading the charge.

On May 19, Wilson launched his eponymous cigar, the Wilson Adams Mr. Wilson, the first cigar that wasn’t a collaborative effort to be released under the brand. In addition to being the launch date of the Mr. Wilson cigar, it was also the date the company was relaunched and Wilson’s birthday, making for a trio of special events. 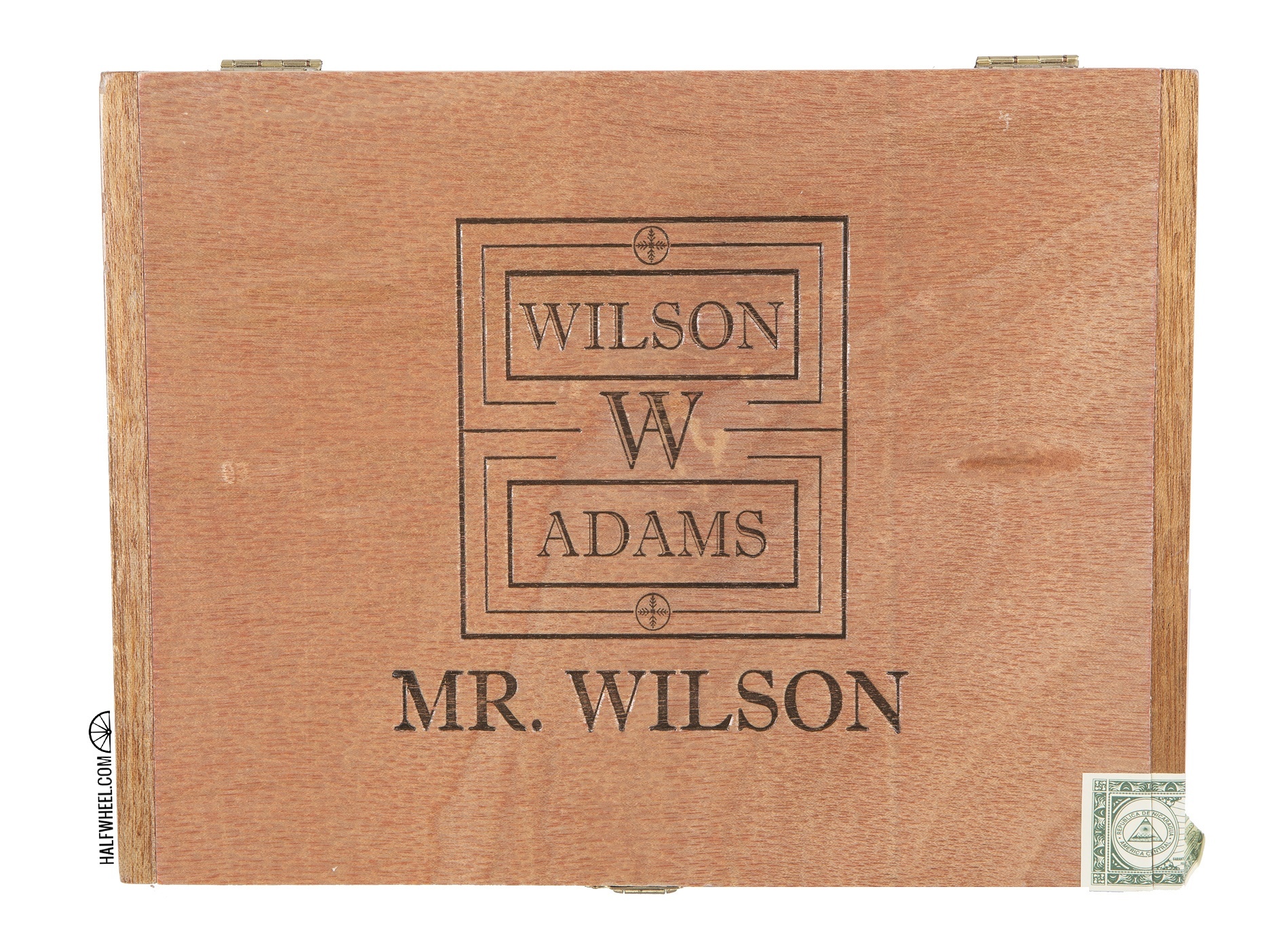 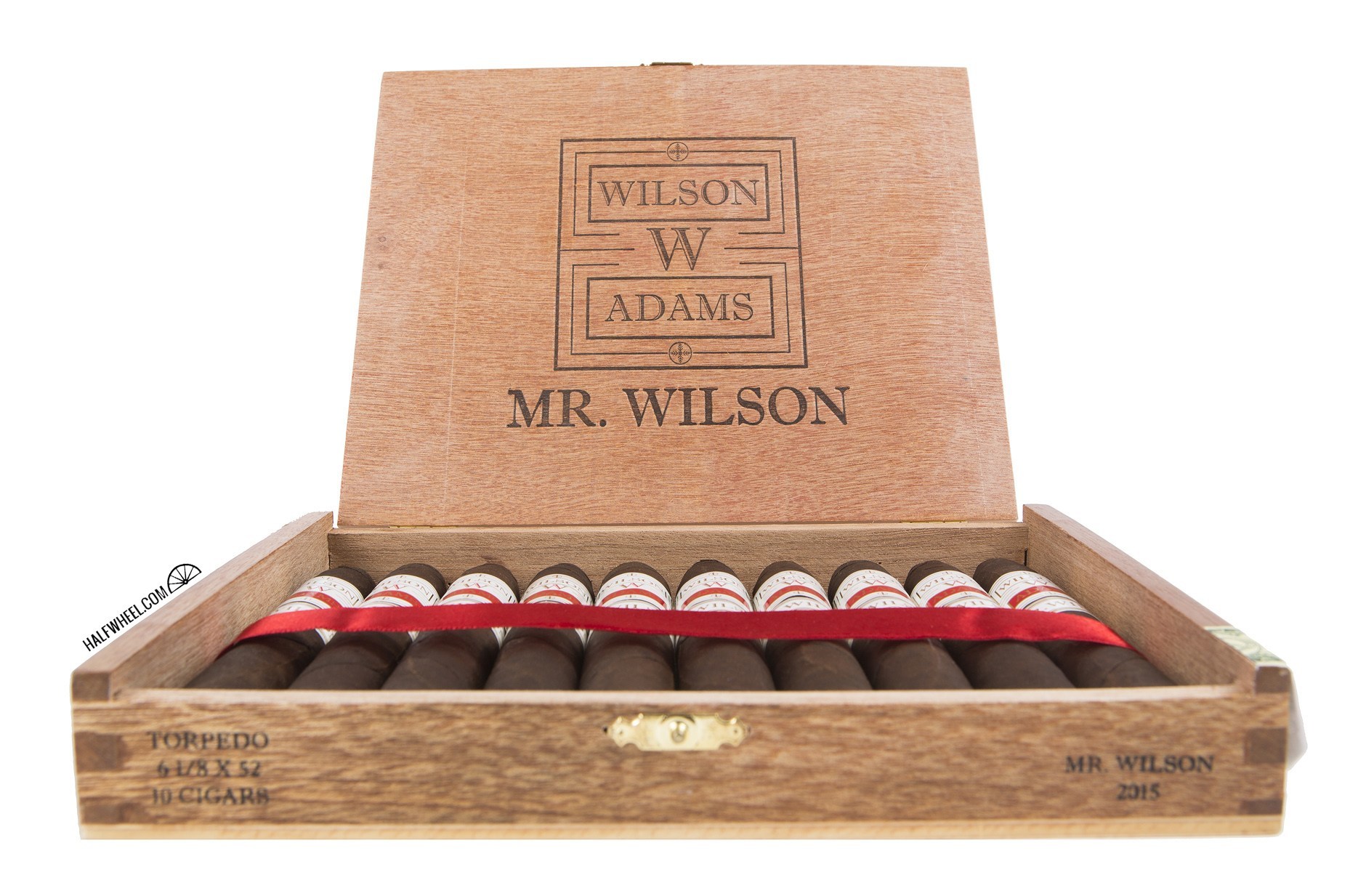 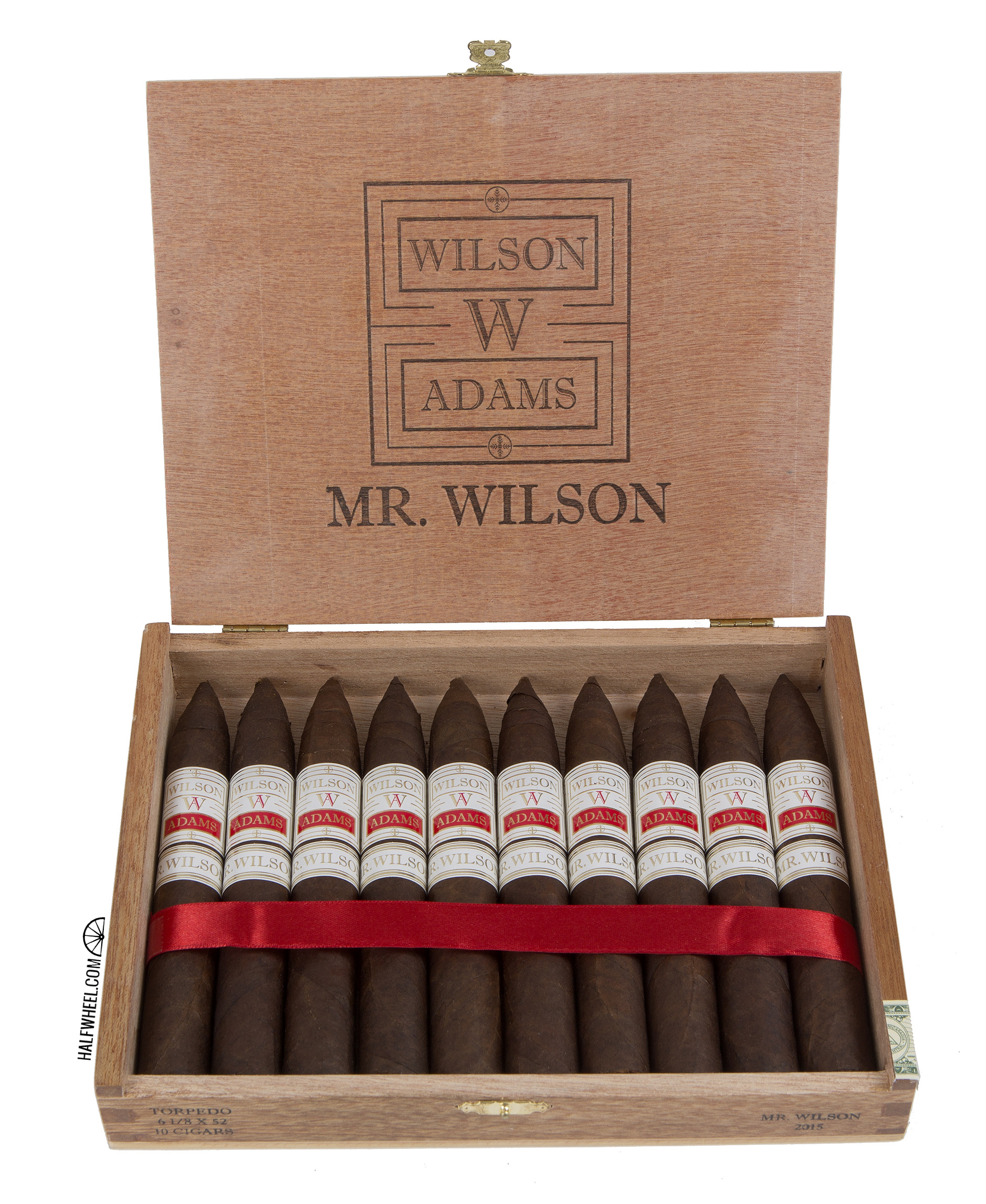 Billed by the company as the “excellence of execution,” it’s listed as a full-bodied, full strength cigar that promises steadily increasing strength that culminates in the final third and leaves the smoker in “a thoroughly satisfied state.” It’s an incredibly limited cigar both in terms of production and distribution, with just 16 stores splitting up 2,500 total cigars. 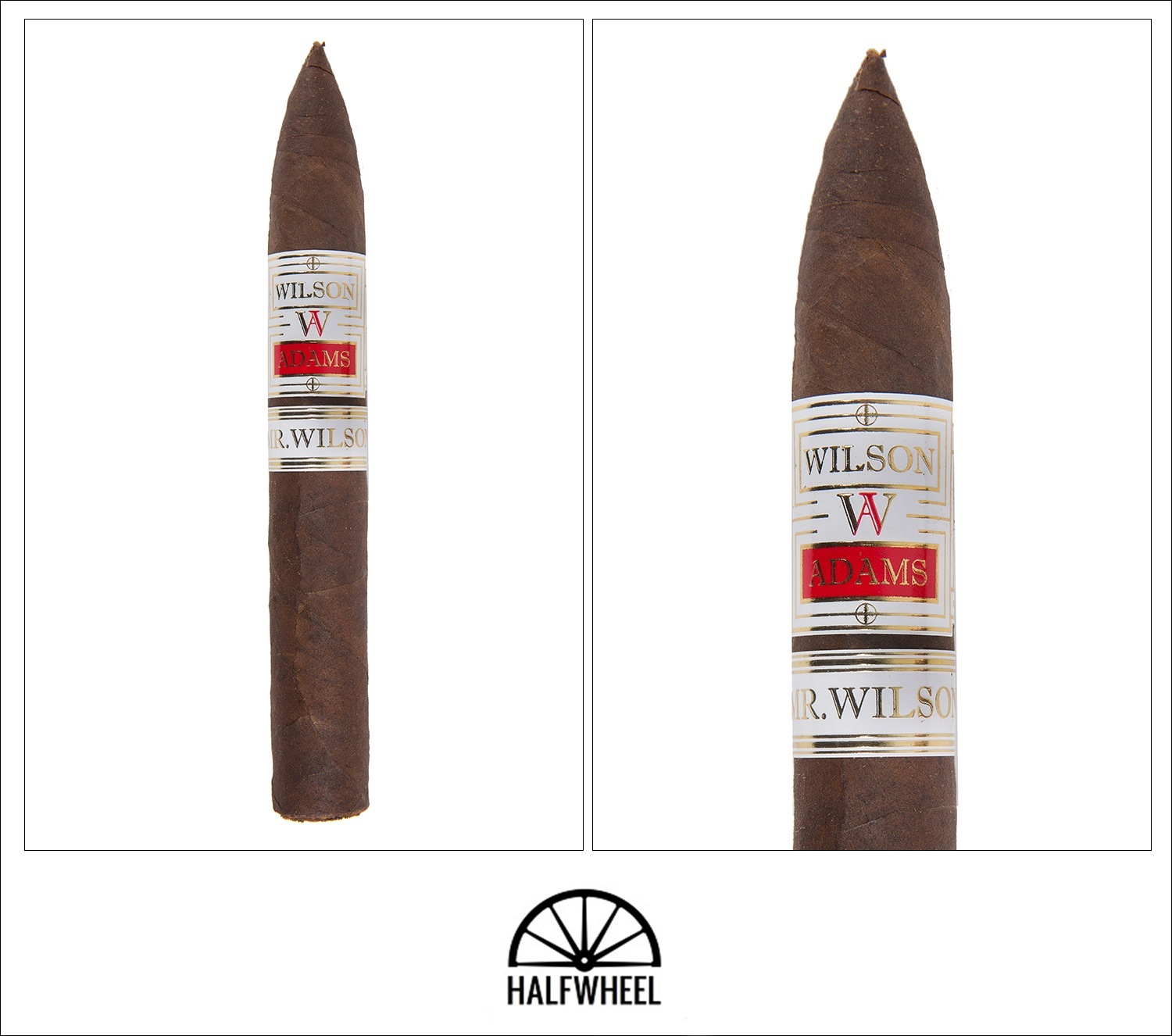 I like the first impression that the Mr. Wilson offers: a reasonably sized cigar with some class bands and a well executed torpedo vitola, though there is something that’s—dare I say— pretentious about the secondary band, almost as if this is what someone who is a bit too full of themselves would hand me to smoke. The Mexican wrapper is a very dark shade of brown, almost beef jerky in color, loaded with tooth and sparse in veins. It’s a firm roll with just a bit of give that culminates in a sharp point of a torpedo tip. The prelight aroma is a bit earthy but also has a bright top note that has a bit of sweet effervescence to it. I don’t get quite as many distinct smells as I do more of a physical reaction, though it’s not a letdown whatsoever. I also get varying notes of brownie and chocolate chip cookie with touches of pepper; a very enjoyable smell. The cold draw varies due in part to how much of the cap is clipped off, but in general it is just a touch on the loose side and again shows the brownie note with touches of cookie dough though with trace amounts of pepper showing up on occasion.

There’s no delay in getting pepper introduced to the palate, as the cigar leads with a good bit of it before following up with a bit more of the chocolate brownie note. The latter is a bit dry and tastes as much like batter as it does the finished product. The first retrohale isn’t quite as peppery but compliments what the palate gets as the aroma picks up a touch of smoky campfire and chalk. I find myself being pulled in three different directions by the flavor and aroma, yet not towards a middle point where they are all working in unison. In the first inch I also begin to get a bit of sourness; it’s a flavor that works over the tongue but leaves a surprisingly palatable pepper note behind, and it’s in this note that I see some transitions of flavor. I get a touch of burnt cherry, a sweetness that helps lend complexity to the cigar on both the nose and palate. The draw is very good, smooth and easy with no burn problems and plenty of smoke. 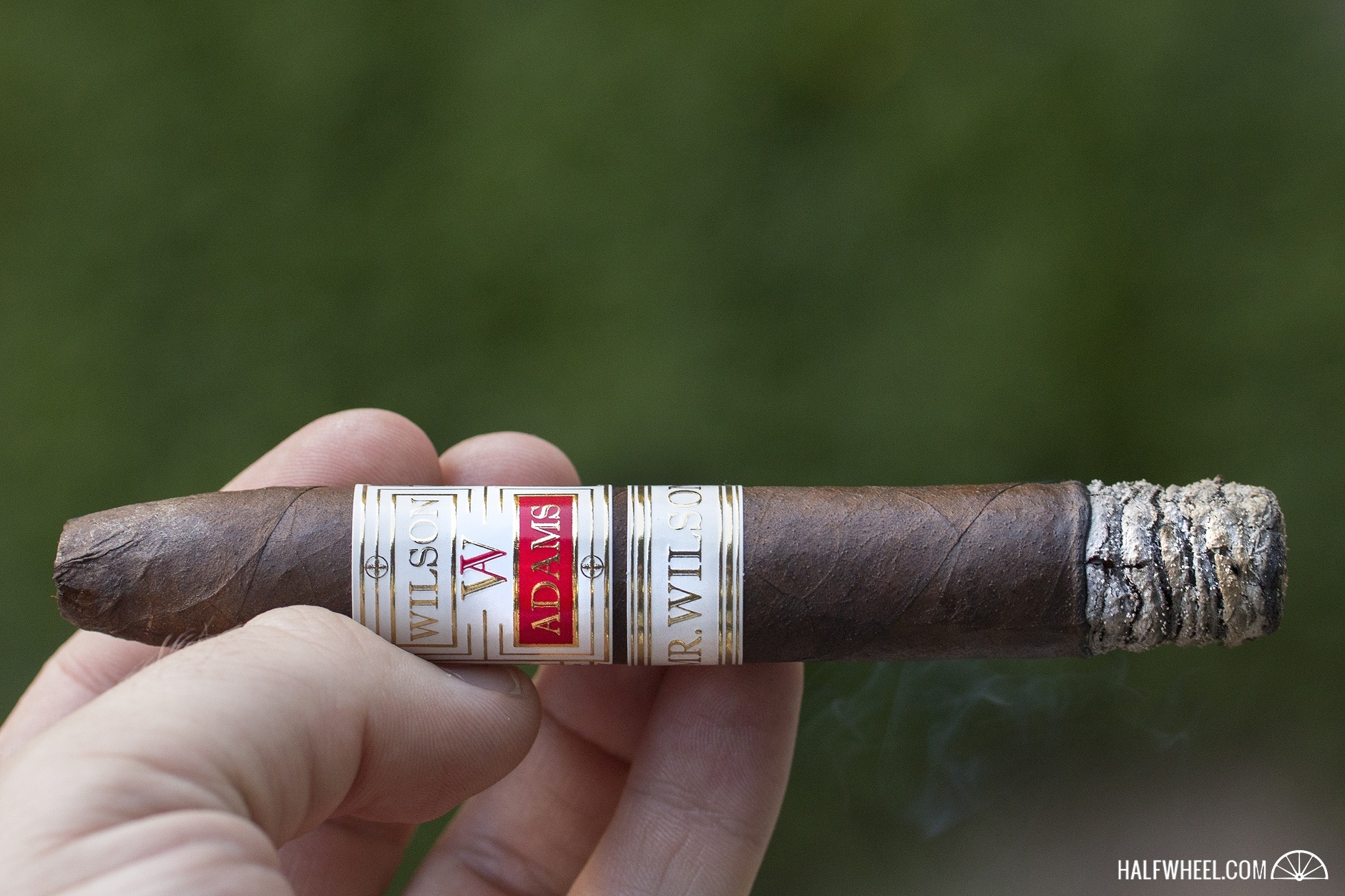 The progression into the second third is fairly linear, though the sweetness has subsided a bit and leaves a somewhat strong, medium-plus bodied smoke behind. Given that the Mr. Wilson was touted as having steadily progressing flavor and building strength, I’m impressed that it’s living up to its billing, though I’m interested to see where it will go from here as the flavor is already above medium and strength is starting to increase into my preferred levels, so any more and I worry that it might come at the expense of the complexity that set such a good tone in the first third. At the midpoint I get a strong punch from the pepper, hitting the nose first through the ambient aroma before being tasted soon after. Strength continues to climb as the burn line approaches the final third, with a bright aroma being followed by a hearty, robust and peppery flavor, as well as a significant increase in nicotine and a subsequent physical reaction, the latter of which has me worried for what may lie ahead. 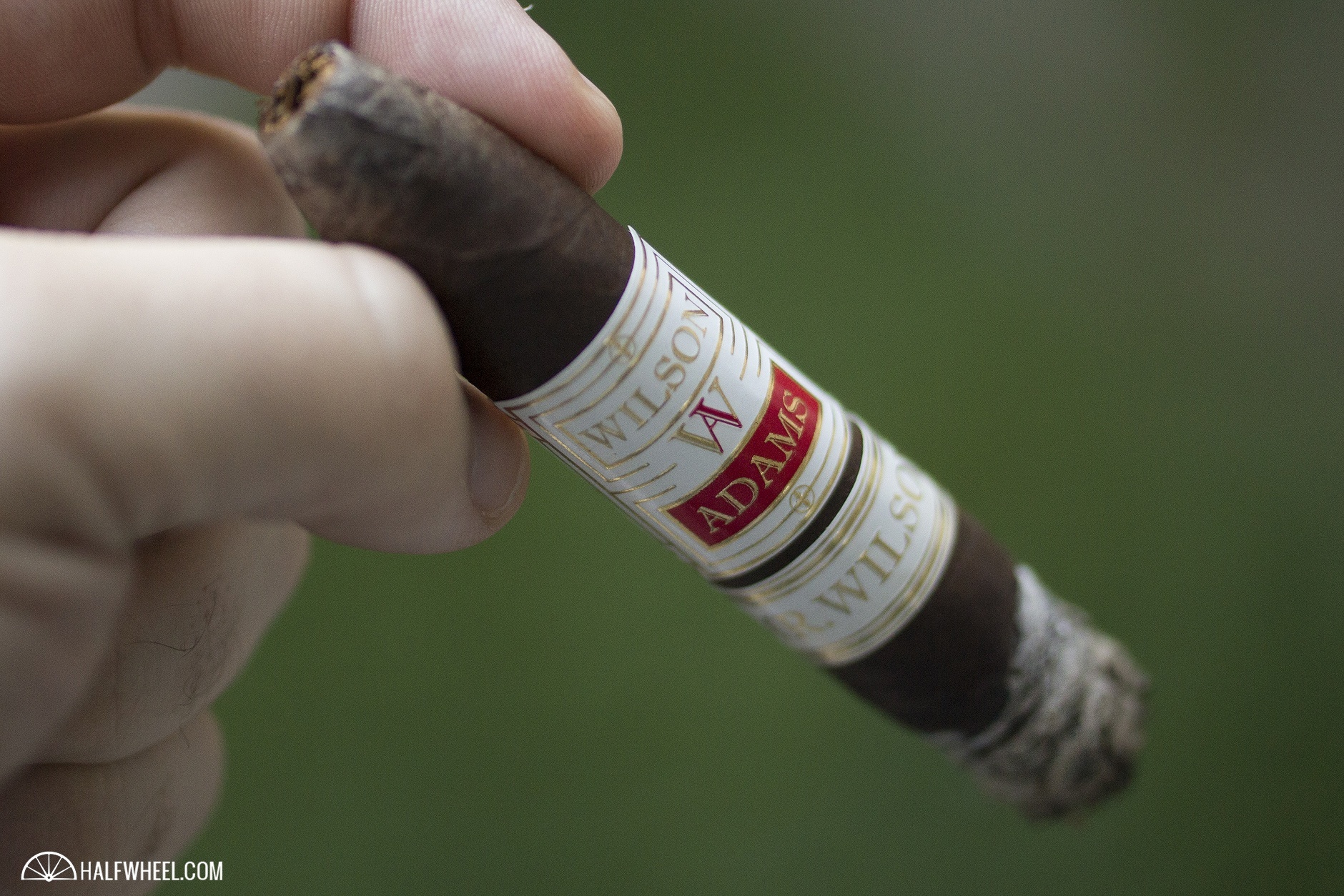 In the first puffs of the final third, I can quickly feel things falling off the tracks due to an adverse physical reaction I’m getting from the Wilson Adams Mr. Wilson. If you’ve ever felt cigar sick, you’ll know what I’m talking about as I’m getting an incredibly strong punch in my chest and feeling a touch woozy in the head. While the cigar is still flavorful, it’s hard to pay attention to what it’s offering in light of the strength, which has me thinking I should put the cigar down instead of trying to muscle through it. Flavor-wise, the firewood note doubles down once the bands come off to lead the flavor, with the pepper moving to a secondary position but still contributing plenty to the profile, pushing it into full-bodied territory in terms of flavor intensity and medium-full if not more by way of strength. This evolved flavor lingers for some time on the palate and begins creeping down the throat, almost overwhelming the system with its presence. It’s clear that this cigar is headed towards going overboard with strength, a choice I let the cigar make on its own without taking me down with it. It's unfortunate that what will likely stick with me most about the Wilson Adams Mr. Wilson is its final third, because the rest of the cigar is quite enjoyable. While it occasionally felt disjointed in the first third, the complexity was apparent and it felt that the cigar could be a sleeper hit of complexity and flavor. Yet once it turns the corner of strength past its midpoint, things begin a quick and rapid slide into a profile that is completely unacceptable for me and leaves me feeling worse--much worse--than when I started the cigar. Hopefully the rebirth of the Wilson Adams brand fares better than the cigar blended to commemorate it.