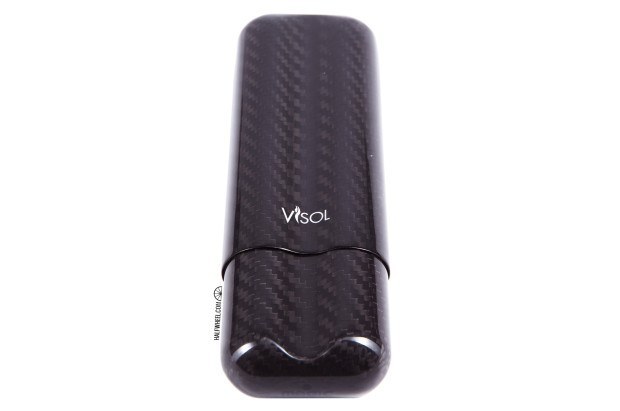 Carbon fiber has been around for decades. And yet, it still sort of seems like something that up until very recently was reserved for advanced airplanes and Formula One teams. But now, it’s almost everywhere. Car companies are using it for spoilers, hoods, roofs, interior components and even wheels. Even more companies, vehicular or not, are using faux carbon fiber as a decoration for various products. But there are others that are trying to use the real material to produce unique products. Cigar accessories are no different and Visol, a company many are probably unfamiliar with, is using it to produce cigar cases.

Without getting too much into a science class, carbon fiber is a series of fibers that are woven together and then oftentimes formed with plastics to create a shape. That creates the carbon fiber, or more specifically carbon-fiber-reinforced-polymer, that most people know. People use carbon fiber because of its incredible strength-to-weight ratio which makes it incredibly popular in car racing, aerospace, high-end vehicles and now, consumer goods.

There are cigar lighters, cutters and humidors that feature carbon fiber patterns, but most of those uses seem more vanity than practicality. One place where carbon fiber does serve a unique purpose is when it comes to cigar cases and there are a few on the market.

One of them comes from Visol, a company that sells a variety of cigar accessories. The company makes a handful of high-priced composite material-based cigar products including two- and three-cigar cases in three different finishes. I’ve spent the last few months with the Night Carbon Fiber 2 Finger Cigar Case ($100), but the company also makes more expensive Kevlar-based cigar cases ($180-200) in both red and blue finishes.

Carbon fiber is incredibly light, and upon picking up the Visol case for the first time, you are led to believe that this is the real thing. The weight, a total of 29 grams when empty, is a bit mystifying. While it feels incredibly fragile, solely due to the thinness and weight, I have to remind myself that the product is actually incredibly strong.

So I proceed to intentionally drop the empty case on the ground, only to pick it up without a scratch. 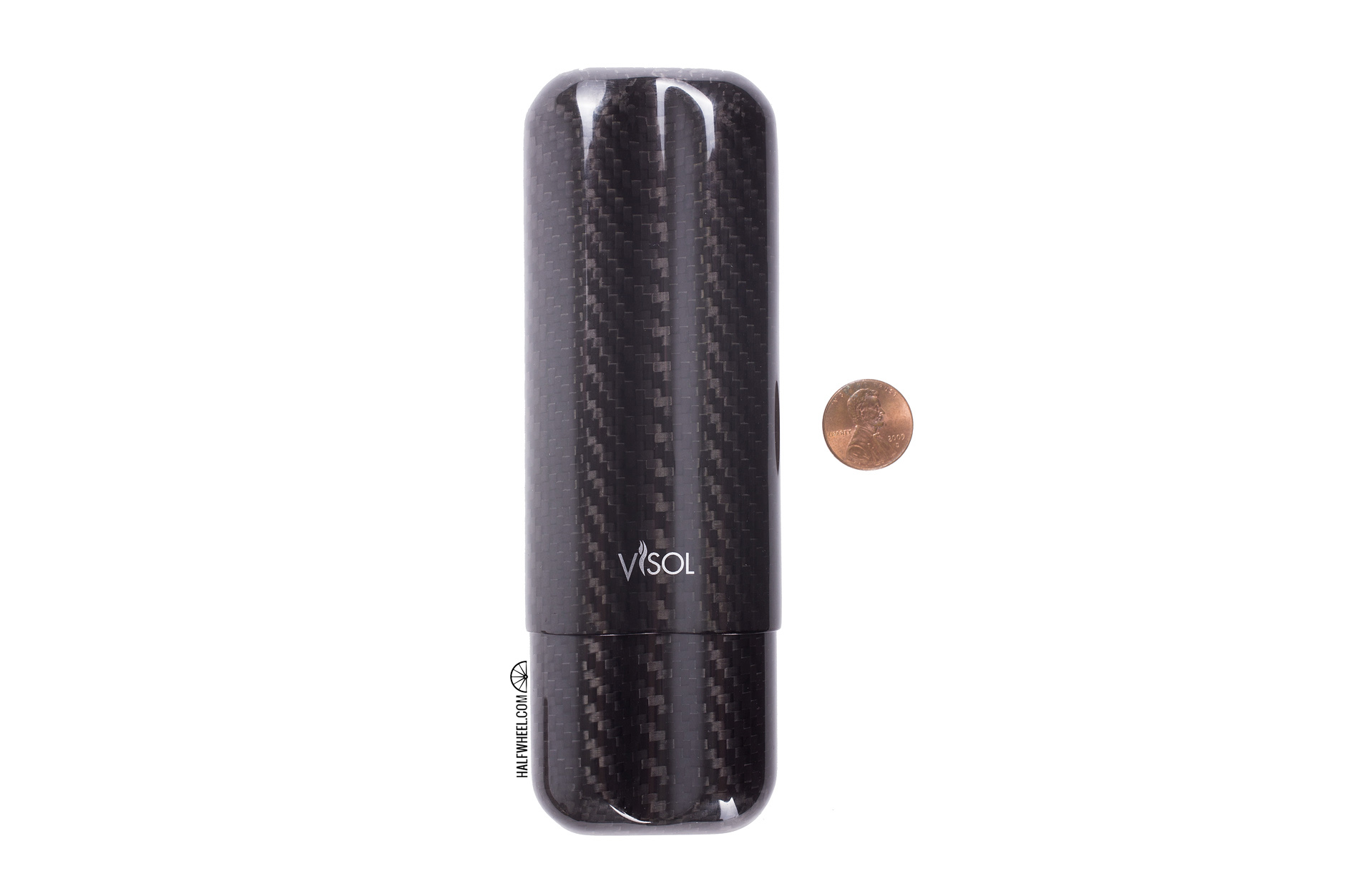 When completely closed, the case measures 5 3/4 inches by 1 7/8 inches wide and just under an inch from the bottom of the case to the top. Fully extended, the case is 9 3/4 inches. Visol claims that’s good enough to hold two 60 ring gauge cigars, something that I can confirm. That being said, placing Churchill-sized cigars in the case is a bit awkward, as the case gets really long in your pocket. 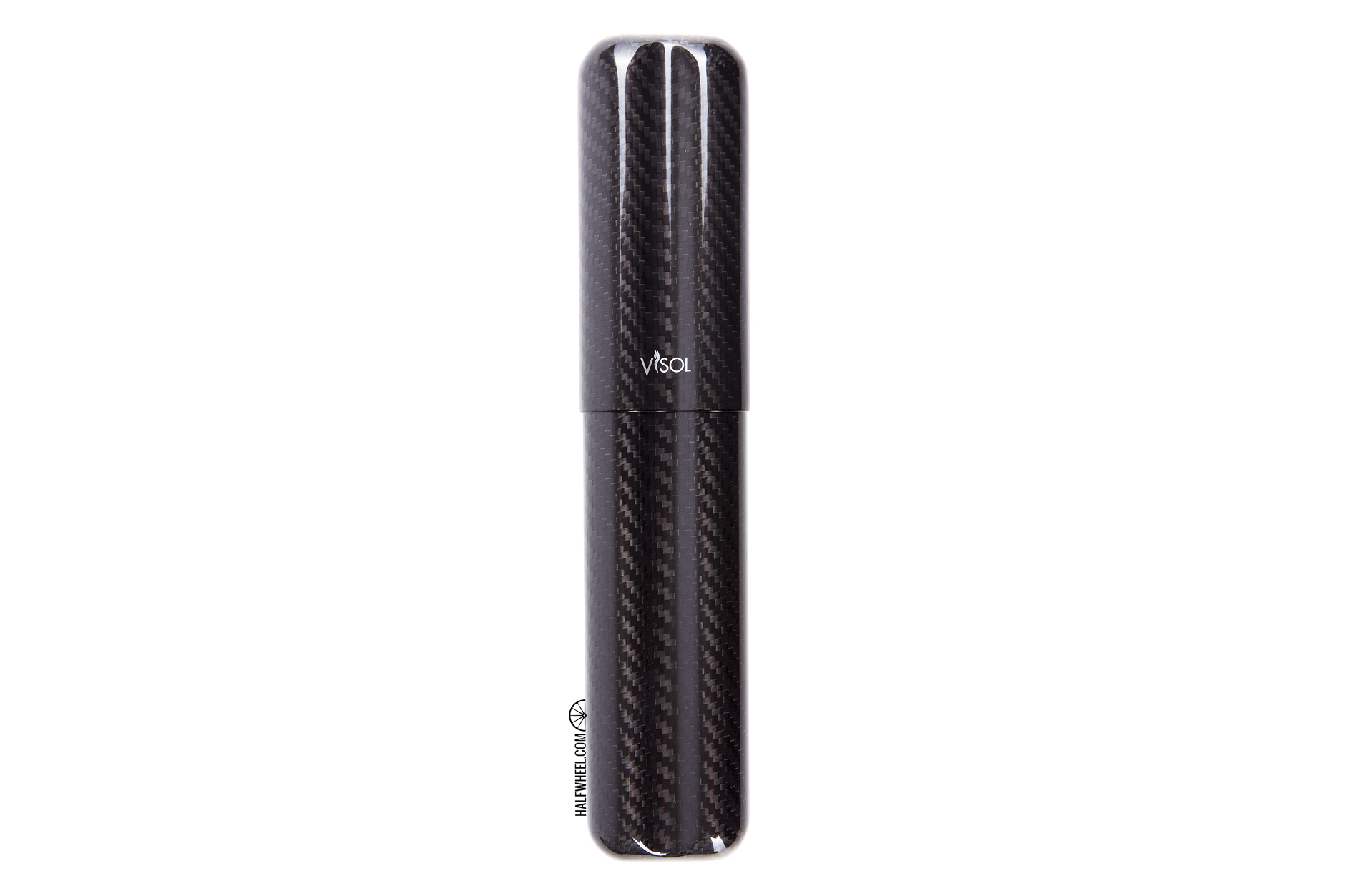 I’ve spent the last three months using the Visol case as my regular cigar case. When not using it, I’ve kept it in my daily bag in hopes of seeing if I could damage the case through normal, albeit, heavier use. After months of being in my bag with heavy DSLRs sitting on top of it, or smushed between small Pelican cases and power chargers—the thing still looks brand new, which I found a bit odd.

Carbon fiber can scratch and chip, but it is incredibly strong; stronger than my almost, but not totally, deliberate attempts to push it to its limits. I’ve taken neither a knife nor a hammer to the case, but even with deliberate dropping, I have a case that looks just as it did when I took it out of the presentation box. 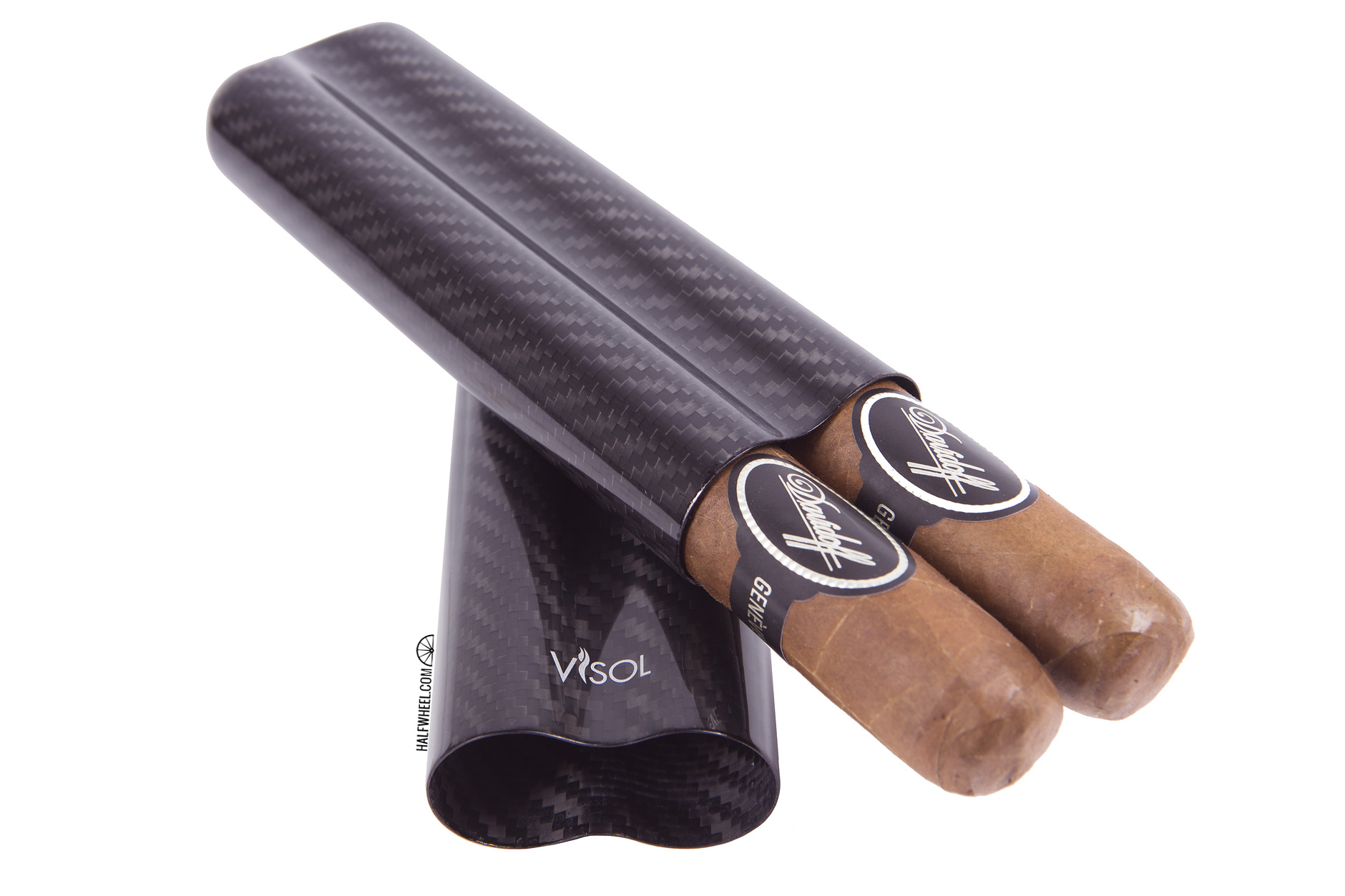 Another interesting note about carbon fiber is that it can sustain really high temperature loads. This is particularly important to the Visol case because of the groove in the middle of the case. I’ve found that it works well as a cigar stand and I don’t get particularly concerned about burning the carbon fiber due to the known heat tolerance.

Ashtrays are a luxury. pic.twitter.com/eO2dneMXXj

The seal is good, maybe not as good as some other cases, but still solid enough for me. When you let the case completely close, the case appears to stick together just a bit. I can barely snuggly fit my fingernail in between the bottom and top case when it closed, but the seal otherwise feels good. Leather cases might seal a bit better because they can be stretched and become a bit sticky, but it’s not always the case. What’s notably different here is that if you put two 6 x 60 cigars in the case, the protection level is pretty significant as the cigars aren’t going to be damaged by getting crushed. They might get damaged because there’s no padding, but it’s a trade-off I’m okay making, particularly when using this case in my daily bag. 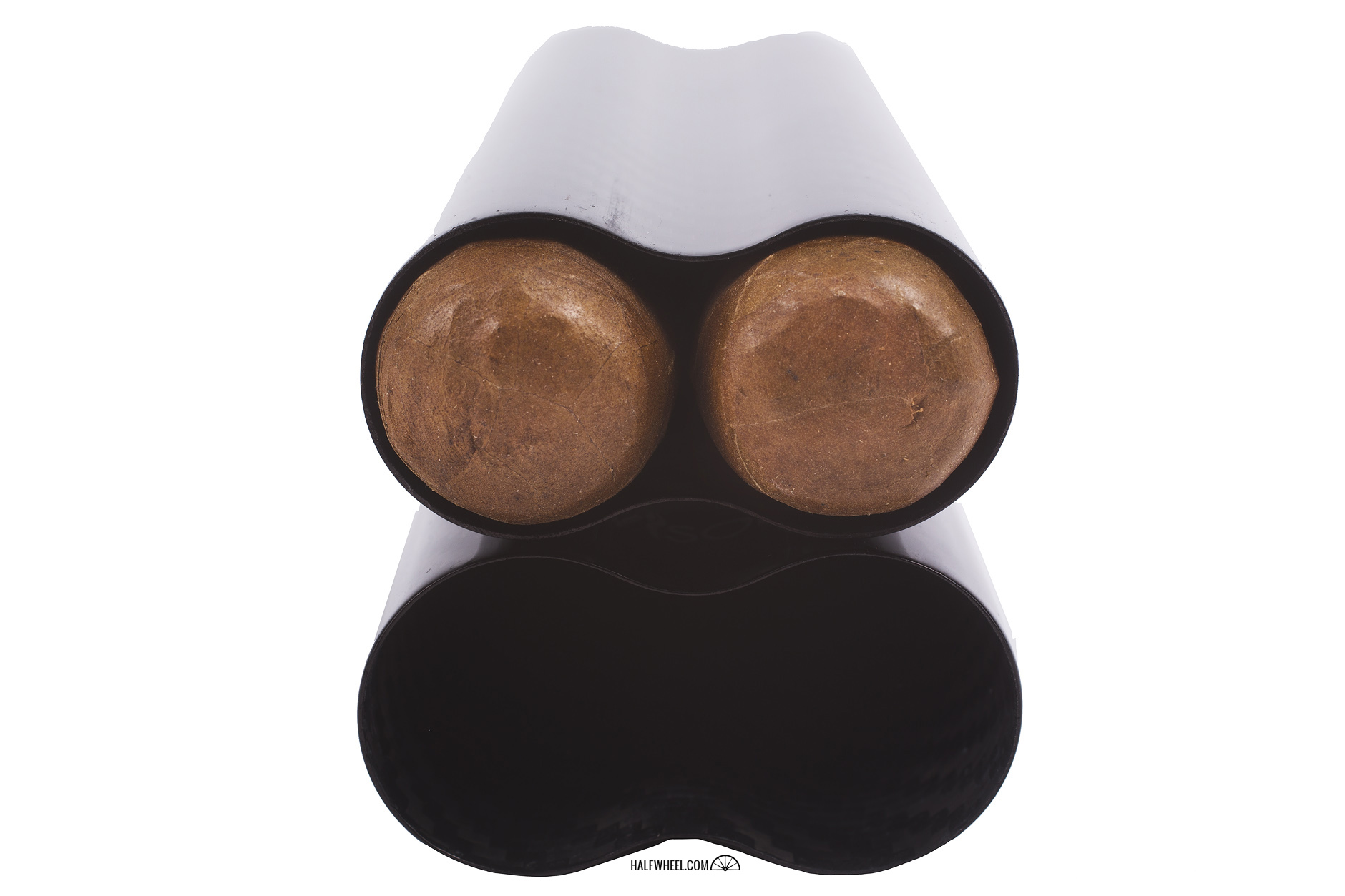 When it comes to competition, there’s two noticeable competitors in addition to Visol’s other products. Davidoff of Geneva USA makes a similar case through its Zino brand for $99, and there’s another two-finger carbon fiber case from Torino Lamborghini that is very similar that retails for around $25-50 more, which seems to be a premium almost entirely for the name. There are other cases that use carbon fiber, but mainly as decoration. A notable exception is a discontinued Porsche Design product that was made out of carbon fiber but had wood on the inside and closed via magnets. That doesn’t appear to be made anymore, but it retailed for $425 and now seems to sell for even more.

There is something to be said about running your hand through the inside of the case as you can feel the weave. It’s smooth and precise, but also textured. It’s then that I really get a sense for the beauty of this product. It’s most certainly not a revolutionary concept: take an extremely strong and lightweight material and make a cigar case out of it; but, it’s still something to marvel out. The woven nature coming together to create a strong, yet incredibly light case is something that still sort of baffles me. At times the 60-ring gauge width is a bit too wide for a petit corona, but in general, this has become my favorite case to take out with me for an evening that might end in a cigar or two. It’s compact, lightweight, protective, functional as a cigar stand and not that bad of a value compared to some of the leather options on the market.

Visol sent the cigar case for this review.