While I don’t know if actual zombies sneak up on their prey, the cigar that bears the zombie name seemed to do that this summer, as the 2018 installment of the Viaje Zombie got a fairly quiet release at the start of July.

Both a habano and maduro version began showing up on retail shelves just ahead of the IPCPR Convention & Trade Show, with both versions measuring 5 x 52 and come in flat, 20-count slide lid boxes that have been used in previous versions. Other than that, little is being disclosed about the cigars, as a Viaje spokesperson declined to comment on the blend, production numbers, availability or what factory made them. They also didn’t appear on the company’s Instagram feed or that of brand president Andre Farkas.

While Viaje makes an extensive portfolio of cigars, the Zombie is arguably one of its best known and most built upon. Launching in 2011 and limited to just a pair of stores at the time, the line has steadily grown to include two varietals, the Zombie Red and Zombie Green, as well as differently colored boxes, the Zombie Antidote, Zombie Biohazard and Zombie Super Shot lines. It has also seemingly increased in availability, as the company’s 2016 release went to more than just two stores, though it seemed that not every Viaje retailer received some.

In the days when the cigar was still considered a new addition to the portfolio, it was billed as a follow-up to the WMD & MOAB cigars, accompanied by the storyline that the name came from people’s transitions to zombies after being exposed “to the radiation from the WMD release.” While I like the tapered foot of the Viaje Zombie, the wrapper on this cigar leaves a bit to be desired in terms of visual beauty, as the leaf looks dry, oddly mottled, chipped in spots, and generally just a bit off. It has one of the most matte finishes I’ve seen on a leaf in recent memory, and I’m a bit surprised it doesn’t offer more tooth to complete the look. The foot of the first cigar also happens to be covered, albeit oddly on the first sample, with what looks like a piece of the wrapper leaf folder over it, but the execution leaves me lacking. The second and third samples are much better, as the tobacco is tucked and folded much more cleanly. The pre-light aroma is light and has a bit of pepper and some peanut butter, though it’s all very mild in the nose. The cold draw is quite good in terms of air flow, repeating some of the peanut butter but sweeter in this encounter, and with almost no pepper to be found. The only other note is that there is varying levels of airflow obstruction based on how tightly the foot is covered.

The 2018 installment of the Viaje Zombie Green starts on the dry and earthy side, with a thinness to the first sample’s smoke that doesn’t endear itself to the palate as much as something a bit more lush would, which thankfully the second offers. There seems to be a mineral-like component just lingering at the edges of the earth flavor, and while I can’t quite pin down the flavor, it’s not helping things. There’s a good bit of pepper to be found through the nose on the first retrohale, though like what the palate gets, it’s on the dry side, which while potent thins out its potential complexity. The burn line gets a bit uneven as it heads it to the straight portion of the cigar, though given the inherent issues with lighting a perfecto evenly, I’m not inclined to hold it against the cigar. As it does, the cigar picks up more black pepper, and the addition is fairly raw at that. Thankfully it’s not long after—just over an inch in—that the cigar begins to develop some roundness that helps soften and contextualize the pepper amongst some body, which had been lacking to this point. For some reason I find myself retrohaling the first third of the first sample more than I would normally, and when I deliberately stop and move back to just experiencing the smoke on the palate, I find it is nowhere near as peppery as I thought, and if anything has picked up a bit of creaminess to soften out the still vocal earth component. The final puffs of the first third see the ash still intact, the burn line almost completely evened out, and a smooth, easy draw with decent smoke production. My nervousness about the ash falling somewhere I don’t want it to is building almost as fast as the ash itself heading into the second third of the first sample, a matter complicated by the fact that as much as I want to tap it off, I’d also be intrigued to get a picture of it. I finally decide to let it build, get the picture, and then tap it off, commending it for staying attached for so long. It’s also here when I take my first retrohale of the second third, and the cigar is still on the peppery side, though seems to have both settled a bit and turned to a lighter, white pepper as opposed to the heavier black pepper it exhibited earlier. The progression to the midway point sees the cigar begin to fill out better, the final two samples better than the first, with the second cigar particularly notable for a bit of a chocolate brownie flavor and texture, as the smoke also gets a bit thicker and chewier. There’s still some dry, occasionally rocky earth to be found, but it is fleeting and more of a sideshow than the main attraction. The burn line has evened itself out, the draw is near perfect, and smoke production is sufficient if a bit fleeting. 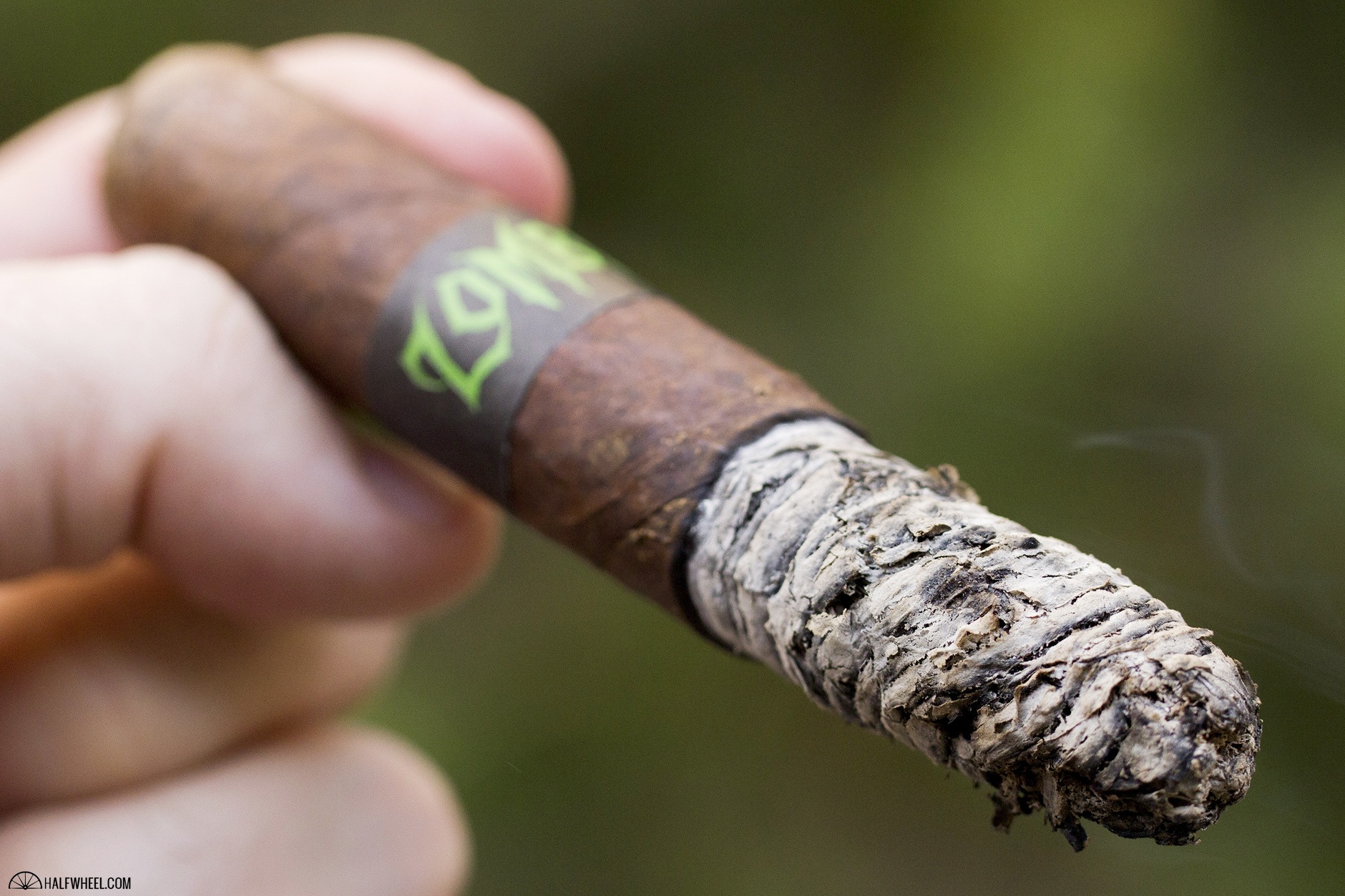 There’s a steady decline in the pepper and earth that becomes noticeable at the start of the final third, and the cigar seems to push forward to a new plateau of complexity and flavor at the start of the final third. There’s a toying with some chocolate at this point, reminding me a bit of grocery store brownie bites in that there is a chocolate-like flavor but it’s far from what you’d get from a chocolate bar. Pepper continues to mellow, and now leaves just a bit of a lingering tingle on the tongue as an afterthought to the rest of the profile. By the point where there’s only about an inch left to burn, the flavor starts to turn, possibly a result of heat playing more of a factor, but there’s still plenty to be enjoyed from a profile that is now a solid medium body, medium flavor offering. The cigar doesn’t finish quite as well as the rest of the final third performed, picking up a bit of woodiness, sharp pepper and general harshness, but it has still come quite a ways from where it started. The Zombie Green continues to burn quite well with an incredibly smooth draw and respectable smoke production. While I haven't always been crazy about the Viaje Zombie line, it has steadily climbed up the list of my preferred cigars from the company, something that still surprises me given what this cigar could be in terms of strength and pepper. Instead, the cigar shows balance and complexity, though not completely from start to finish, but enough that it shows it has more refinement than might be surmised, and holds potential for further refinement with some additional aging. The 2018 installment of the Zombie Green is certainly one I would return to in the future without any hesitation and reinforces that this is one of the company's better offerings.