Viaje’s most colorful series of cigars is also one of its smallest, physically.

I’m not sure that there’s actually an official name for the series, but Pepper Series seems best given that each of the six cigars in the series are named after peppers. The latest in that series is the Viaje Scotch Bonnet, named after the peppers that are native to the Caribbean. Scotch bonnet peppers measure 80,000–400,000 on the Scoville scale putting them in similar ranges as a habanero pepper.

As for the cigar, it’s similar to the first five cigars of the series in some basic details: a 4 7/8 x 50 perfecto that is partially covered in foil with a twisted tail. It’s also priced at $8.56 per cigar. I really like the contrast between the gold foil and the dark wrapper of the cigar. Taking the foil off also removes the band, which is attached to the foil, though it is a separate piece that can be easily removed, which is what I do for the sample photographed. Aroma off of the wrapper is medium-plus with some leather, nuttiness and a bit of acidity. The foot doesn’t provide a ton of aroma and I opt not to stick the cigar up my nose in search of some. The cold draw has a variety of muted flavors with some restrained pepper hitting the center of the tongue and a bit of cinnamon candy, creaminess and a bit of cocoa. When I take a very deep cold draw and exhale through my nose I can taste a sweet red pepper and chocolate flavor that reminds me of stronger Nicaraguan cigars. 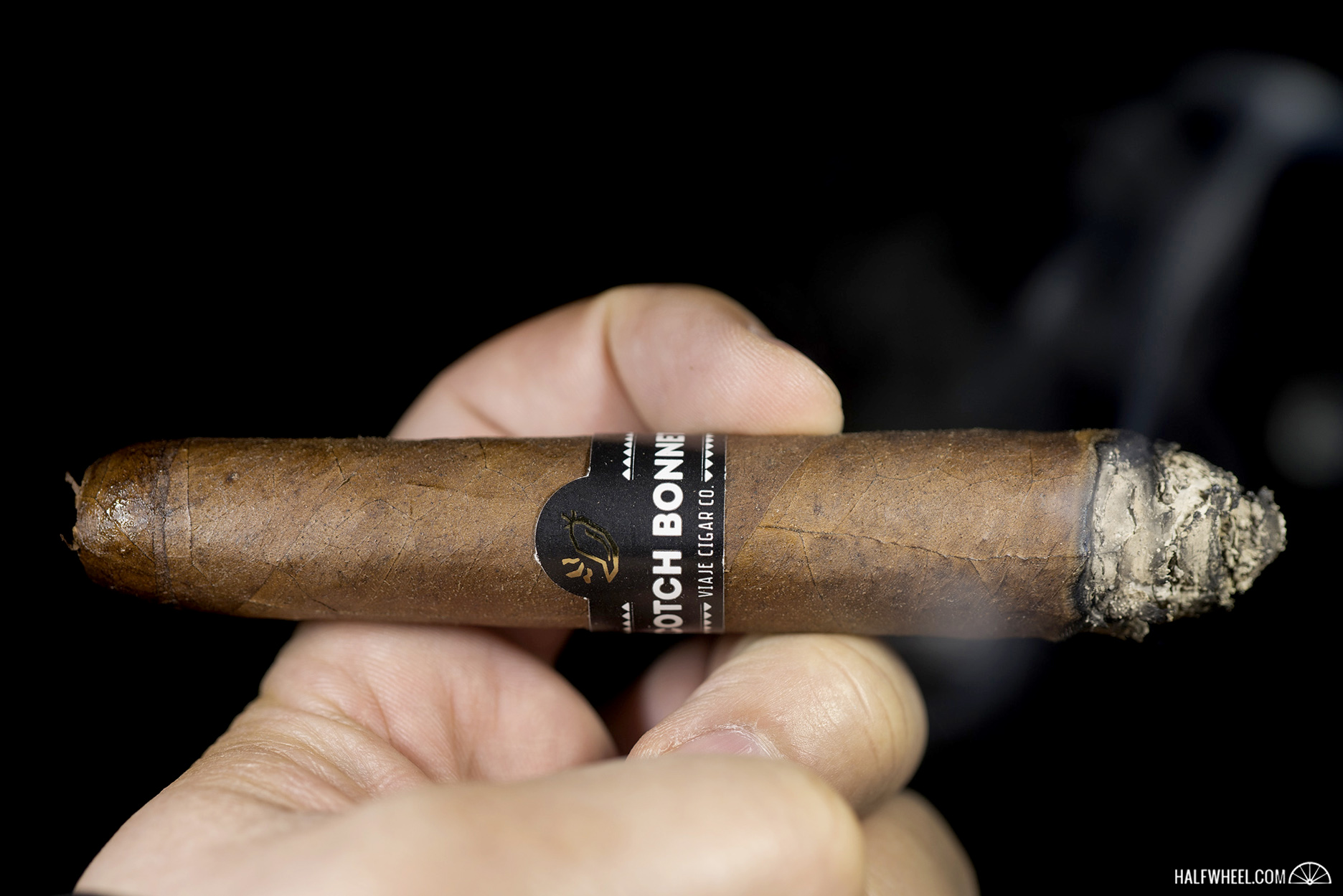 On the first sample, I am far more restrained with the cut than I should be and as such the flavor is equally restrained. It takes a while for smoke to fill my mouth but once it does there is earthiness, bitter cocoa, pepper and a bit of nuttiness. While I don’t feel the nicotine hit, the flavors give every indication that it should be strong. Subsequent cigars get a more aggressive cut which leads to a more intense profile of the same flavors. The first third of the Viaje Scotch Bonnet provides earthiness, red pepper and oak. Through the nose I get some very pleasant orange peel and some jalapeño salt on the finish. Flavor is full, body is medium-full and strength is full. While more aggressive cuts lead to more smoke, they don’t seem to increase the actual amount of flavors from the cigar. Regardless, I would recommend taking off a bit more than normal as it drastically helps the draw and smoke production. The second third of the Viaje Scotch Bonnet provides a much more complex profile with a variety of bread flavors, oak and a restrained pepper. Retrohales have a deep earthiness, grapefruit and some of the jalapeño salt. While the new flavors are the main part of the profile, they are not the only part. At its core, it doesn’t seem like the Viaje is ever going to shake the mixture of restrained earthiness, red pepper and cocoa. Intensity-wise, things remain the same: full in flavor and strength, medium-full in body. With a more aggressive cut, the smoke production and burn are fine on all but the last sample, where I find myself having to touch the cigar up to keep it lit. I have two very different experiences in the final third of the Viaje Scotch Bonnet. On the second sample, the cigar is very much a continuation of the second third, which is great. Unfortunately, two samples decline noticeably in this portion. The earthiness that has been with the Viaje since before I lit the cigar has now turned harsh. It’s the dominant flavor in the mouth, now joined by some lemon. Through the nose there’s some nuttiness, lemon and more of that harsh earth. There’s not much left pepper-wise, a very muted flavor that reminds me of pepper flakes that have been burned on a grill. While the pepper might not be as present, there’s a pretty hefty dose of nutmeg on the finish. As before, flavor is full, body is medium-full and strength is full. Construction is great on two cigars, but the one sample that had issues in the second third is now struggling to stay lit and needs a few touch-ups to make it through the final three quarters of an inch of the cigar.

Of the three Viaje Scotch Bonnets I smoked the middle cigar stands out as an outlier in a good way. That cigar was richer and more complex than the other two. All three were full, all three had somewhat muted flavors and I'd smoke all three again. That being said, one sample struggled to burn, the draw was a bit tight on each and the flavors could have been better. However, if you are looking for a full cigar at a value in the Viaje portfolio, the Scotch Bonnet continues to prove the Pepper Series is the way to go.