In 2009, Viaje launched the Holiday Blend, a green and silver-banded, full bodied cigar that fittingly shipped in December. Since then, there have been 11 Holiday Blend releases, including three barberpole releases known as Candy Cane.

Like many Viajes of the last year, Candy Cane has moved to the Dominican Republic. The first 10 versions of Holiday Blend were produced at Raíces Cubanas in Honduras, but it is now being produced at PDR Cigars. This year’s version uses a combination of Brazilian arapiraca and Ecuadorian habano wrappers over a Dominican and Nicaraguan binder and fillers. The cigar was sold in a bundle, which was a new take for the line, and is box-pressed, something that’s new to Candy Cane.

The other big change is that this year’s cigar has the Edición Limitada band which means that this exact cigar—blend and size—won’t ever be produced again. 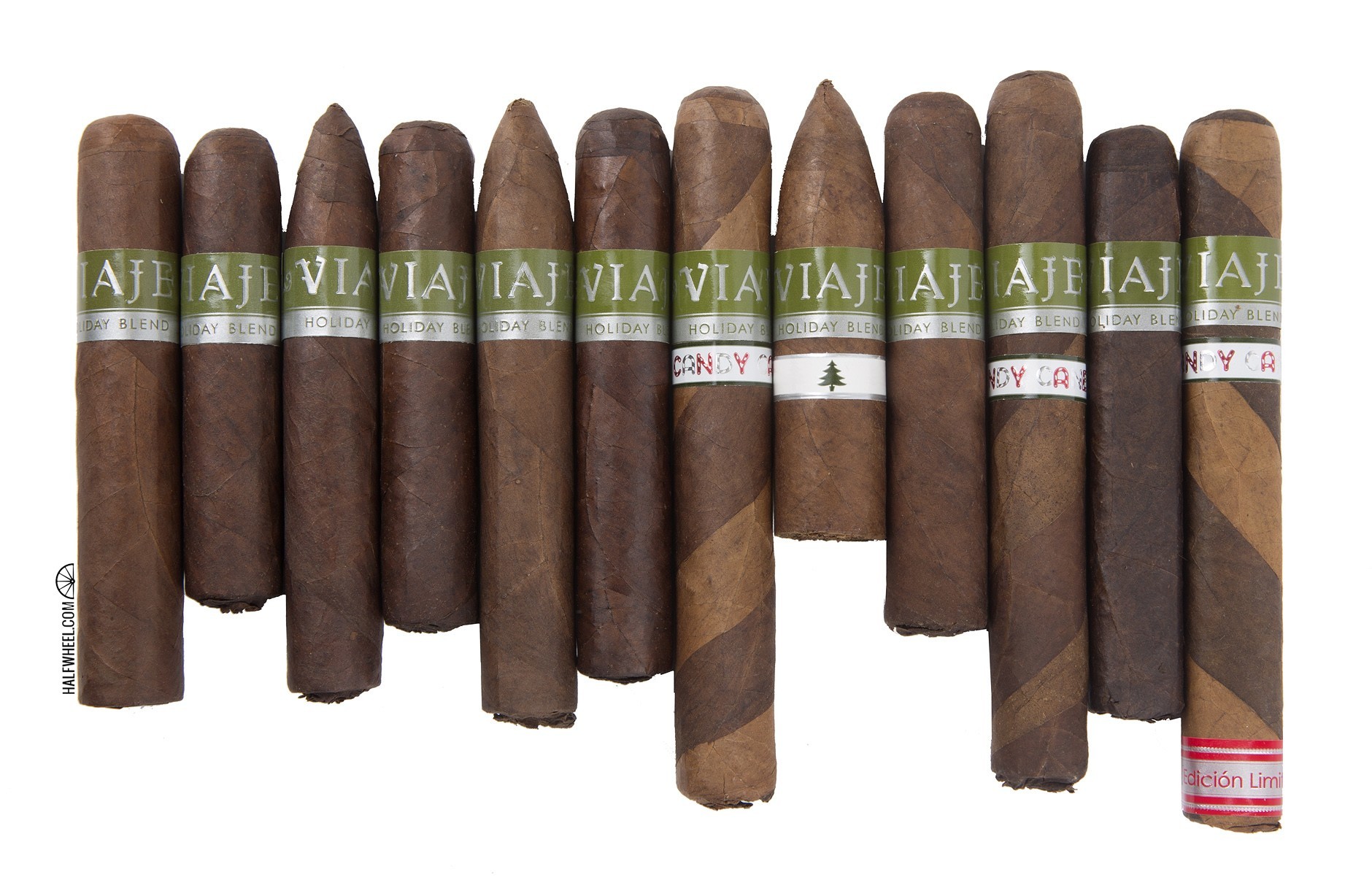 After removing the foil and the foot band–with more on that below–I’m presented a 6 x 54 barberpole with a Candy Cane second band. It’s a decent-looking barberpole, though none are really ever perfect in appearance. The covered foot is an interesting touch, not really a common trend for the limited amount of barberpoles that are on the market today. Speaking of the foot, there’s lots of peppermint, vanilla, pine and some thyme aroma-wise, which isn’t particularly different from running my nose up and down the cigar. There’s lots of mahogany, lime zest and walnuts on a medium-full cold draw.

That lemon zest mixture makes it way into the start of the Candy Cane Edición Limitada now joined by some nuttiness, dry cinnamon, meatiness and some oak towards the back end. It’s very well balanced and a great start. The first third develops into a mixture of oak, pine, pita bread, poppy see and some creaminess. The finish is a bit more chalky with some grains, but it’s unfortunately sort of just one large continuation with the nose. Construction is great, although the ash is a bit flaky, particularly the covered foot portion. The lemon remains towards the front of the cigar making the Candy Cane more sour than sweet. An oakiness is nearly right alongside with some creaminess, leather and readiness behind. Some vegetal flavors begin to develop midway through the second third and pick up a bit towards the final third. While the mouth flavor is only medium-plus, the retrohales are full with a punishing mixture of candied lemon and a freshly shaved oak. Between the retrohale and the finish things are extremely full. Two cigars need to be touched-up in the middle portion, but other than that construction is fine. 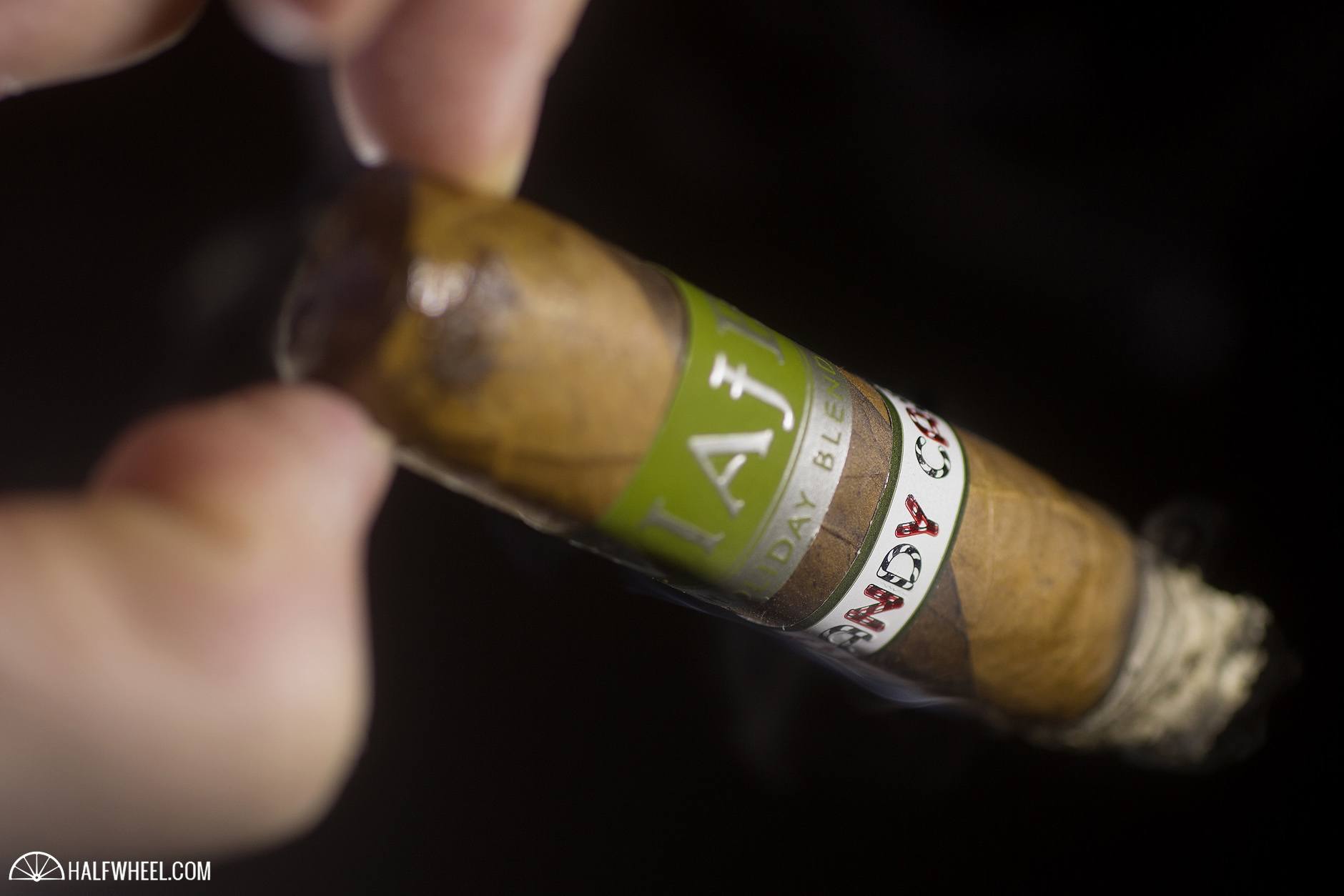 A lemon meringue pie sweetness enters the final third in front of crisp bread, the aforementioned vegetal flavors and some underlying creaminess. The finish has a bit of a funky meatiness to it, almost like a truffle, but it’s relatively mild. There’s some breads and toastiness in the finish of the retrohale, which is really where all the action is in the final stages of the Candy Cane. I need to touch up all three cigars in the final third, mainly to prevent them from going out. While the Viaje Holiday Blend was once one of my favorite cigars, barberpoles have never really been my thing. While it could be at times overwhelming, particularly when it comes to the vegetal and pepper flavors, I really enjoyed the Candy Cane Edición Limitada. It wasn’t perfect, particularly considering a few touch-ups to keep the cigar burning was needed in all three samples, I do think it’s a sign that Viaje’s move to PDR might be on the right track.