Last month, Viaje began shipping a new box of cigars that is notable for a couple of different reasons.

First, the Exclusivo Petite Lancero Collection is just that: a 75-count collection of three different blends in one box: 25 each of the Exclusivo, Exclusivo Leaded and Exclusivo Nicaragua lines, all in the same 6 x 40 vitola and all priced at the same $8.24 each. While there are over 20 vitolas in the Exclusivo line so far, the petit lancero has never been commercially released before now.

Second, the cigars in the box are being produced in two different factories located in two different countries: Tabacos Valle de Jalapa S.A. (TABSA) produced the Exclusivo Nicaragua, which uses Nicaraguan tobacco from AGANORSA, while Raíces Cubanas in Honduras rolled the other two blends. The subject of our review today is the Exclusivo Leaded Petite Lancero, a Nicaraguan puro that includes medio tiempo tobacco, which is located at the highest portion of the plant above the lager priming. It is not found on every plant, meaning the tobacco is not uncommon, but also significantly more expensive than lower primings.

The line debuted in 2014 and now includes four different releases. 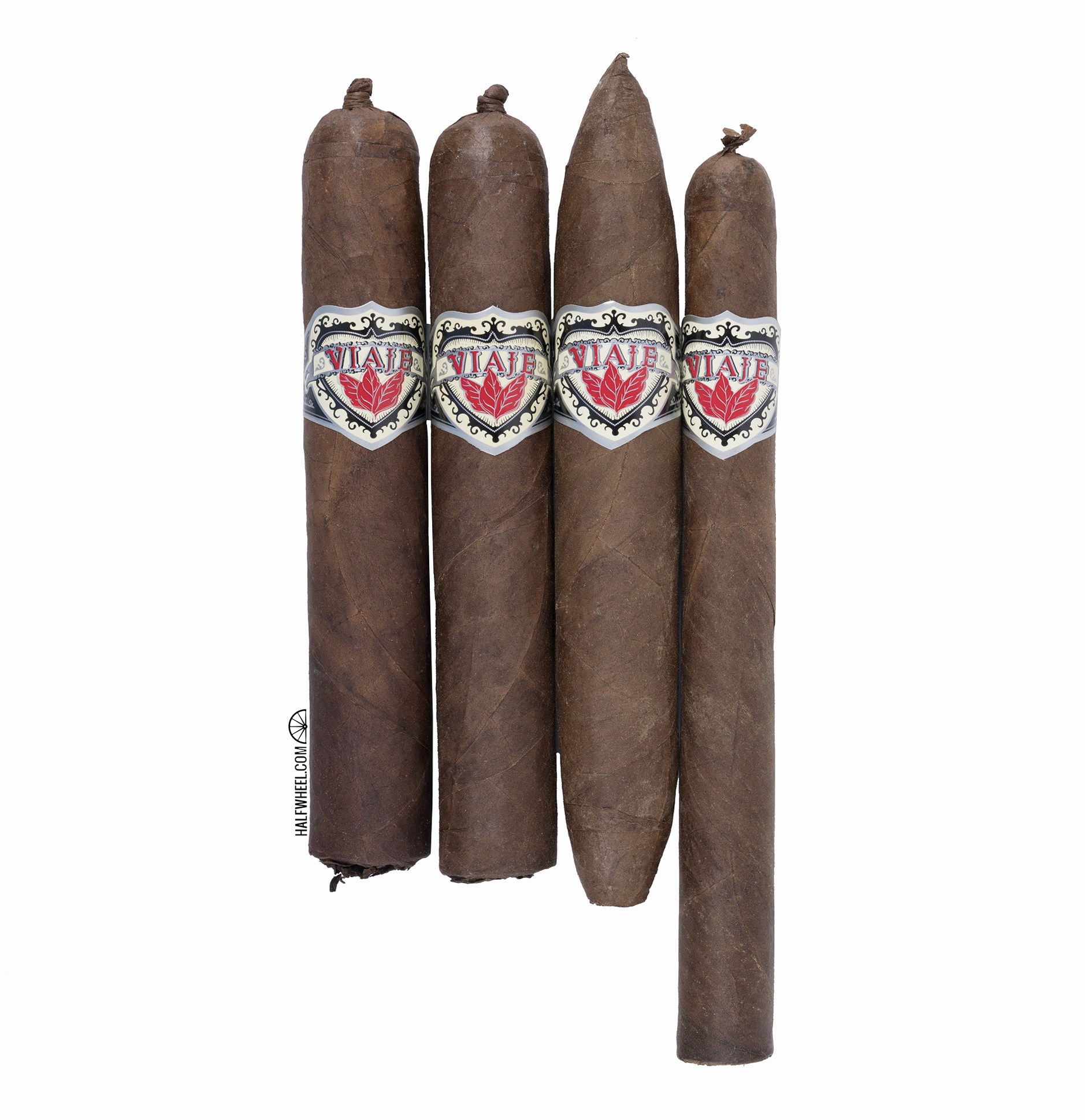 While Exclusivo Petite Lancero Collection boxes started shipping to authorized Viaje dealers in mid-April, a spokesperson for the company declined to comment on production numbers. Visually, the Viaje Exclusivo Leaded Petite Lancero is a gorgeous specimen, with a dark espresso brown wrapper that is silky smooth to the touch and virtually no oil. In addition, there is a small pigtail on the cap and the cigar is spongy when squeezed. The aroma from the wrapper is a combination of manure, creamy peanuts, raisin sweetness, oak and leather, while the cold draw brings flavors of coffee grounds, milk chocolate, sweet oak, salty nuts, leather and vanilla.

Starting out, the Exclusivo Leaded Petite Lancero has a dominant combination of cedar and leather, interspersed with other notes of gritty earth, peanuts, toast, sawdust and pencil lead. There is a nice amount of both black pepper and spice on the retrohale, along with some maple sweetness that seems to be getting a bit stronger as the third burns down. Construction-wise, the draw is excellent after a straight cut, while the burn is giving me very few problems. The smoke production is about average, while the strength hits a point in-between mild and medium by the time the first ends. 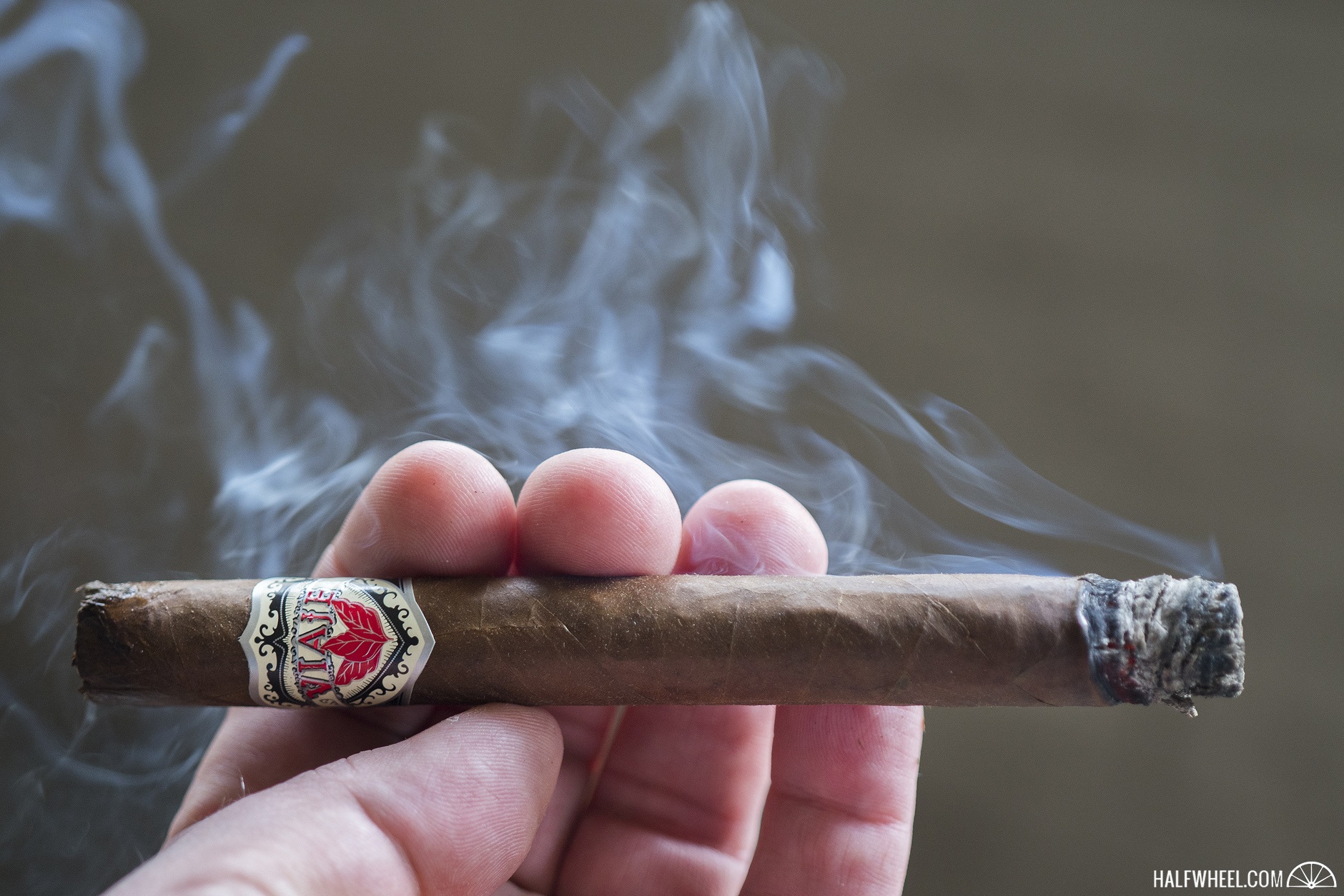 The maple sweetness dies down significantly in the second third of the Viaje Petite Lancero, as does the black pepper on the retrohale. In fact, the profile becomes noticeably creamer overall, as well as noticeably more smooth. As in the first third, the dominant flavors are cedar and leather, but I am also noticing bitter chocolate, leather, dark fruit, coffee grounds, citrus and creamy nuts. The draw remains excellent and while the burn is far from perfect, it is not bad enough to actually have to touch up at this point. Strength-wise, the Viaje easily reaches a medium point by the halfway point of the cigar, but stalls out there, content to remain where it is at the moment. While there is more maple sweetness in the final third of the Leaded Petite Lancero, there is also more black pepper and spice on the finish, leading to a bit more of an unbalanced profile overall. Along with the familiar cedar, I taste more creamy nuts, more leather, more earth and more coffee, along with some nice lemongrass on the retrohale. The burn gets bad enough that I have to touch it up once while the draw continues to impress, and the strength goes no further than the medium mark it hit in the second third by the time I put the cigar down with a little less than an inch to go. It is unfortunate when one bad sample affects the overall experience of a cigar, but that is exactly what happened with the Viaje Exclusivo Leaded Petite Lancero. While the other two cigars I smoked for this review featured a decently complex profile, excellent construction and nice balance, that one outlier’s metallic note became overwhelming in the second third and never let up. Strength on all three was a solid medium—in fact, I smoked all three in the morning, before breakfast and had no issues—and although it is not as complex as the Leaded Double Edged Sword, it is still easily good enough to recommend trying.