Early last year Pete Johnson of Tatuaje announced that he would be releasing two new lines in the following year, one being Fausto and the other being La Casita Criolla.

The basis for the blend comes from Johnson’s love for Connecticut broadleaf and more specifically his love for the old school American cigars that contained 100 percent broadleaf. While it’s not a new idea in the cigar world, it is certainly groundbreaking for this era as no one in the premium cigar market today is doing such a thing.

In fact, many of the cigars that My Father creates for its own brand contain Connecticut broadleaf wrappers, so for Johnson to request a cigar that is made of 100 percent broadleaf is no real surprise.

Also to clear a little confusion, many people have been wondering if this cigar is going to be all Connecticut broadleaf Maduro and that is not the case. Johnson had this to say about the matter:

Okay guys. To clear this up. Not all Broadleaf is dark. The wrapper will be but the binders and fillers are made up of Broadleaf tobacco also. When Jaime buys Broadleaf, he buys in hopes to get good dark juicy wrapper, some medium color wrapper like La Riqueza and good binder but the other leaf that doesn’t make those grades is sorted by size and texture for filler. Again not every leaf will look like the wrapper. It’s all 100% USA Connecticut Broadleaf. Jaime also buys all primings of Broadleaf. Seco, Viso and Ligero. This is also how we are able to sort the filler to do the blend on the cigar.

The initial sizes for the La Casita line will be as follows. The one thing I noticed right away about this cigar is the aroma it has a very distinct Broadleaf aroma, that sweet, earthy aroma that is just so wonderful. I also can’t help but notice the size, what a great size. I have always been a fan of the 6 1/2 x 48 size, it brings me back to the 2003 Romeo & Julieta Edición Limitada officially called the Hermosos #1. The cigar itself has a medium dark veiny broadleaf wrapper with a tight seamless wrap, minimal oils and a good amount of tooth to it. It has a beautiful triple cap as all Pepín cigars do and the cigar is packed well.

Starting off in the first third the cigar I get a nice big pepper kick and as soon as it shows up it mellows down. There is hardly any spice present. The cigar is medium body to start and very flavorful, right off I get a rich nutty flavor as well as an overall earthy sweetness. There are hints of chocolate and a coffee on the finish. More mild than I expected but enjoyable nonetheless. 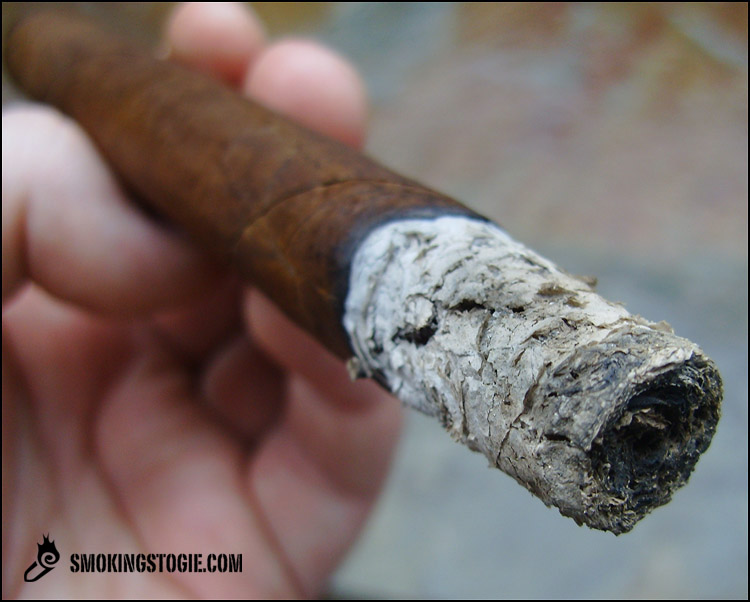 Coming into the second third the cigar turns very lush and creamy, almost chewy. Flavors of leather, nuts and coffee hit my palate and the overall smoothness of the cigar is really impressive. There is very little pepper and spice but just enough to enhance the profile. The cigar is still medium body at the most but very flavorful and the smoke production is perfect. Finishing up in the final third and the La Casita Criolla has a tiny bit of a nicotine kick, more than I expected considering the medium body. Flavors are still very lush and sweet. The cigar heats up a little bit towards the end and in return the flavors get a touch deeper and darker but overall a continuation from the last third. It’s not overly complex but great flavors and a thick mouth feel, long finish and nice balance make this a real winner. If you love broadleaf, you will love this cigar. It has that nice rich earthy sweetness that we have all come to love in broadleaf. Again, this is not the most complex cigar flavor-wise and it does not have a lot of that “Pepín spice” you might be expecting but it certainly has a great flavor profile and a nice balance. A solid medium body with a touch of a nicotine kick, it will satisfy a lot of full bodied smokers. I have to tip my hat to the García family and Johnson because I can’t imagine it’s easy to create a good cigar using all the same tobacco. I think it really shows you what great blenders are behind the wheels at the García factory. Considering the expected price, around $7, I think it’s a no brainer. These will definitely be among my daily smokes when they come out.