In 1895, the first U.S. Open was held at Newport Golf Club in Newport, R.I. At the 2015 IPCPR Convention & Trade Show, Swinger Cigar Co. paid tribute to that event.

Swinger is a company with a golf theme; its debut releases were aptly named Front 9 and Back 9, an homage to how an 18-hole golf course is divided up between the first nine holes and the final nine holes. This year, it released Swinger 1895, a two-vitola line named in honor of the first U.S. Open, and one that is a step up in terms of strength and price from those initial releases. 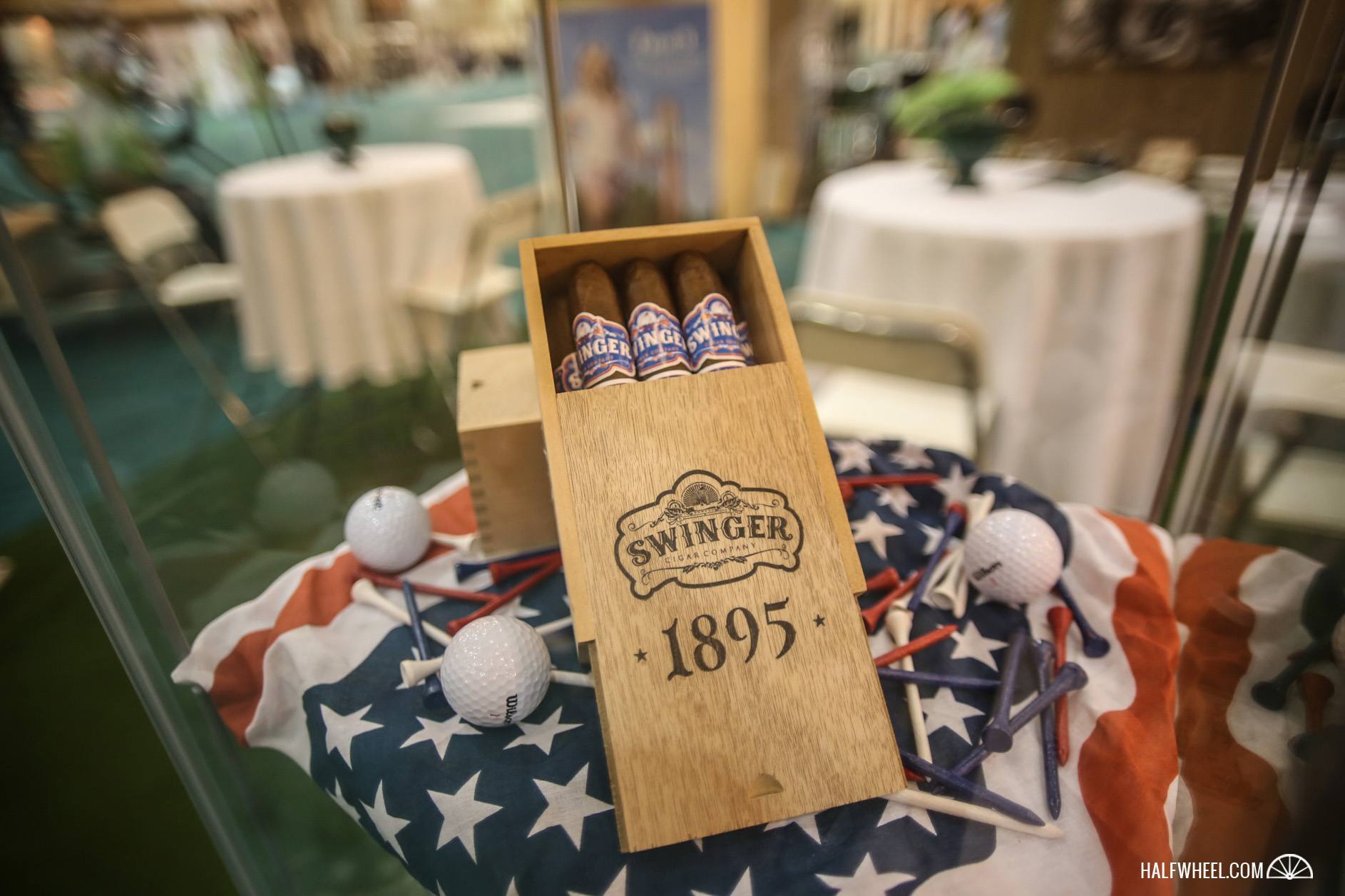 The cigars are expected to ship this month. 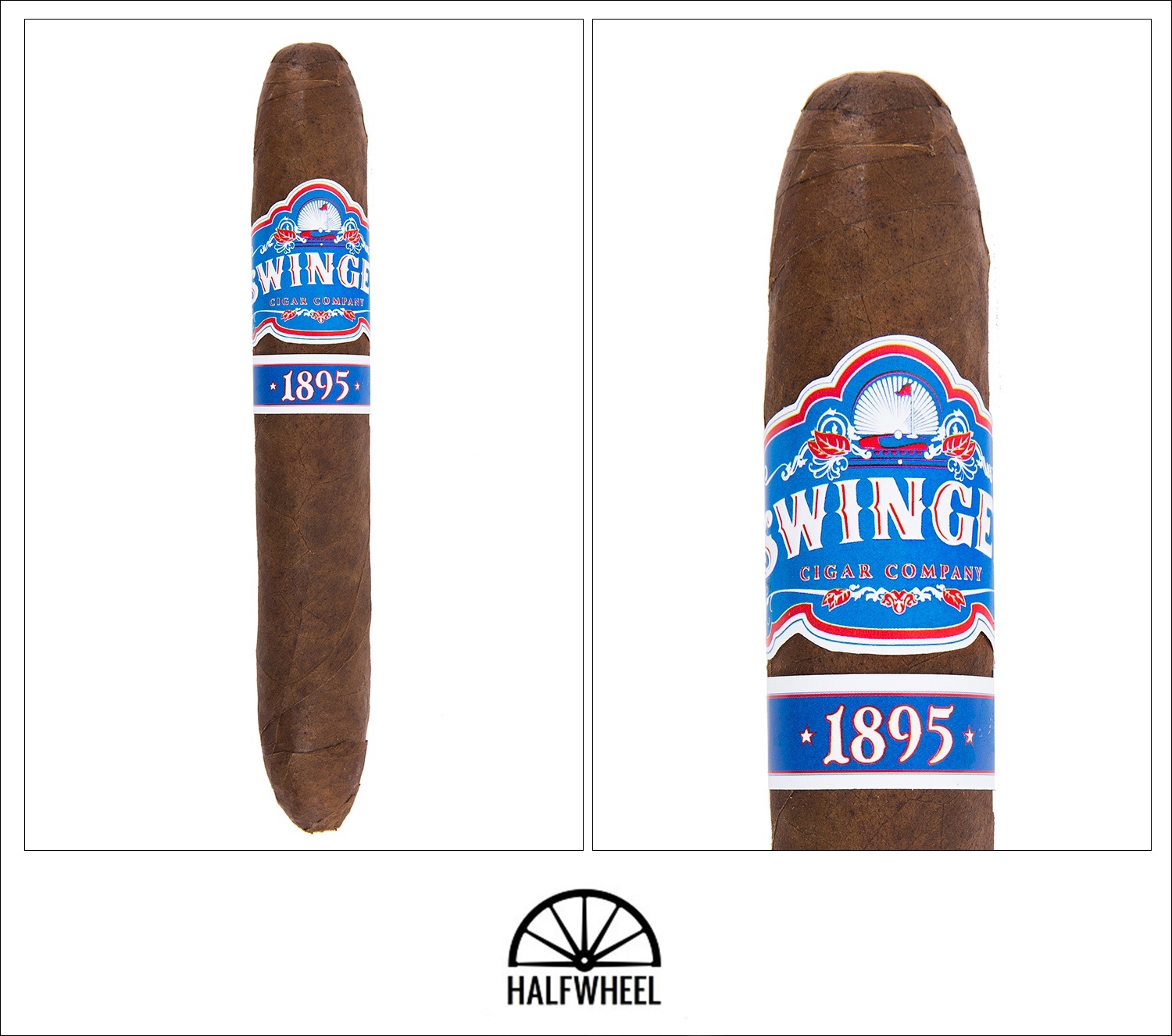 I like the way the Swinger 1895 is rolled. The fat perfecto features a well-applied cap and a uniform shape. As for the Brazilian wrapper, it’s somewhat lighter than what most maduros on the market look like and has some lighter spots that you can see if you look closely. Aroma from the wrapper is led by leather with a mild spice mixture, burnt caramel and a bit of a vegetal component. The foot is not my favorite smell, but it’s unique: burnt green licorice, anise and sour leather. It’s a theme that continues on the cold draw, a mixture of sweeteners, like a vanilla milkshake, and a leather and earthy mixture underneath.

For the most part, I avoid mentioning aromas of a lit cigar because I find they are rather homogenous, but the Swinger 1895 was different. It reminds me of a wood cleaner that my parents used to use, one of those personally distinct smells that I haven’t thought about in the last decade. As for the first puff, it’s smooth with cedar, leather, nuttiness, burnt earth, creaminess and then a touch of pepper towards the back end. The draw is slightly open, producing a plethora of smoke, but it’s not unmanageable. The first piece of ash falls off within the first 10 puffs, which was a bit annoying. As for the flavor, there’s a variety of woody flavors with a creaminess and sour note underneath and black pepper on the back of the throat. I’d peg it as medium in strength, but it seems a lot more aggressive due to the body. Smoke production is fantastic with clouds of light smoke filling the Texas summer night. 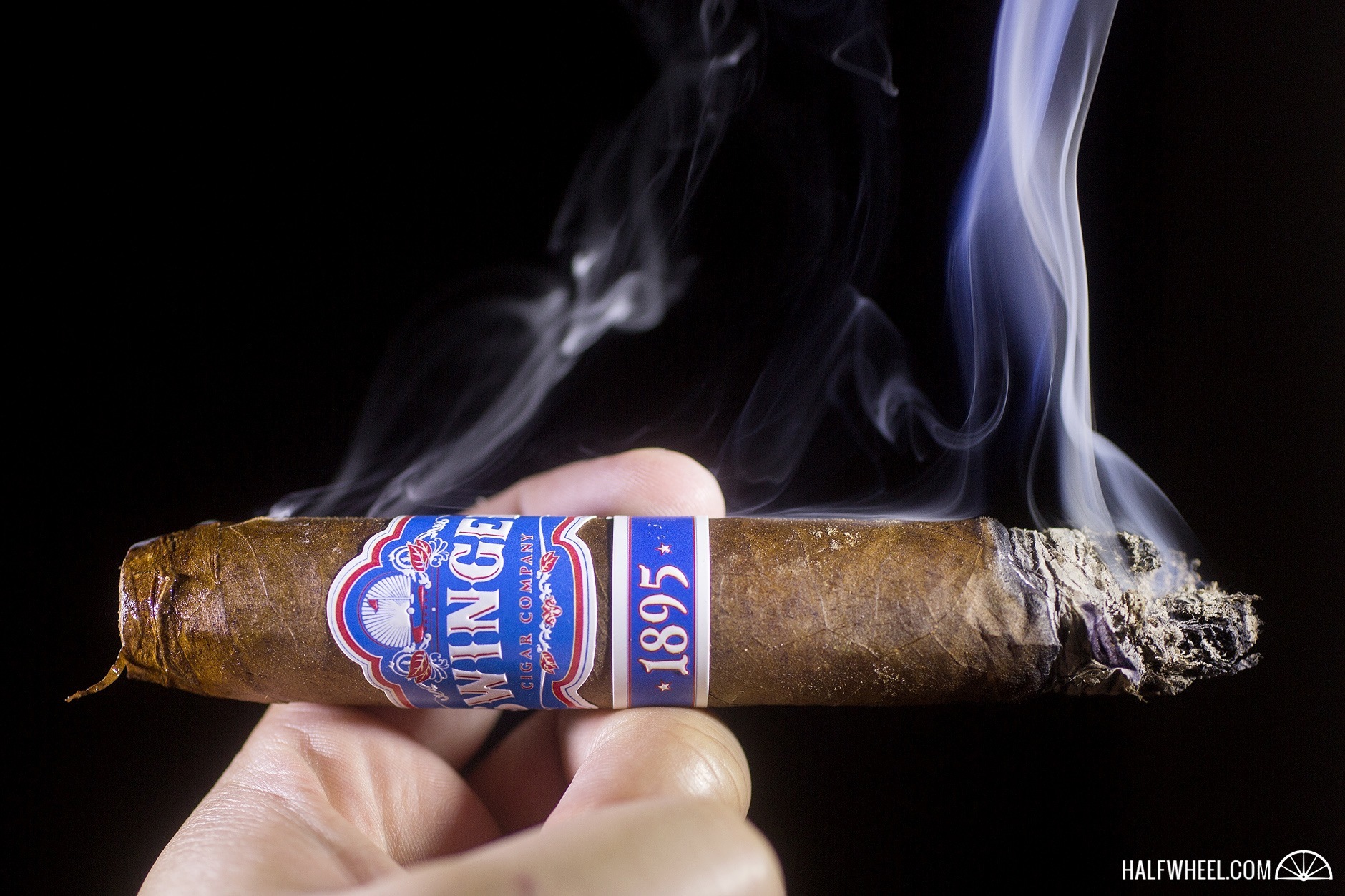 Things get a bit muddled in the second third. It’s a core of earthiness, far less detailed than the first third, with some baker’s spices, white pepper, green licorice and sour leather underneath. The black pepper sits on my throat long enough that it becomes a bit hard, but other than that, the finish is extremely short. Elsewhere things remain the same: the ash is flaky, but burning well. Draw is slightly open and producing tons of smoke. Strength is still medium, but an aggressive medium. 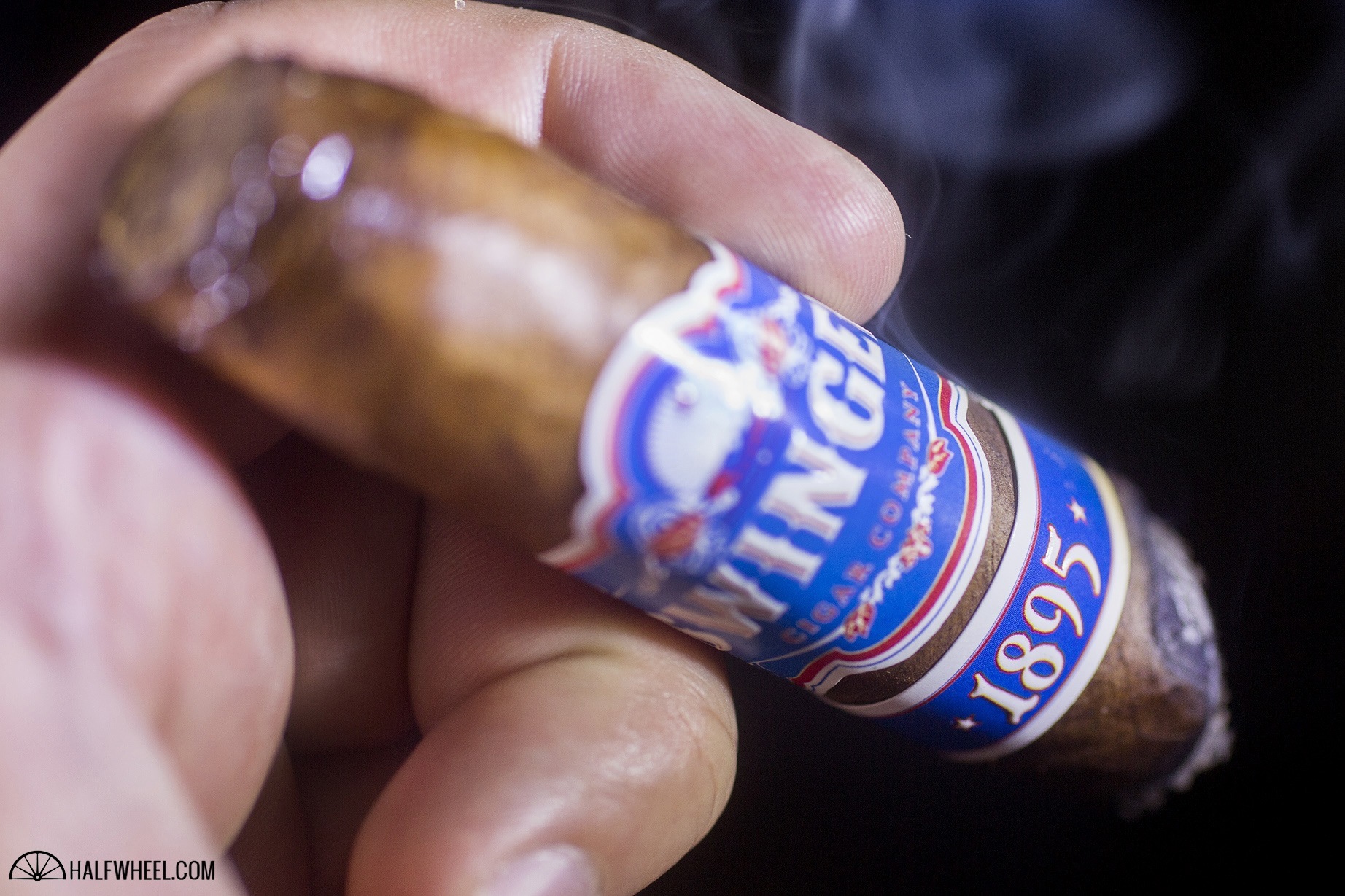 I’m forced to touch-up one side of the cigar somewhere in the last half of each sample. After that, the Swinger 1895 #6 delivers a surprise. While it seemed like the cigar was going to an even more sour version of the second third, suddenly, there’s a succulent floral and citrus core that sit on tops of some creaminess. The toastiness remains in the back, along with hints of sourness, but the core flavor has changed dramatically. Elsewhere, things remain much the same with the strength maybe picking up a bit. 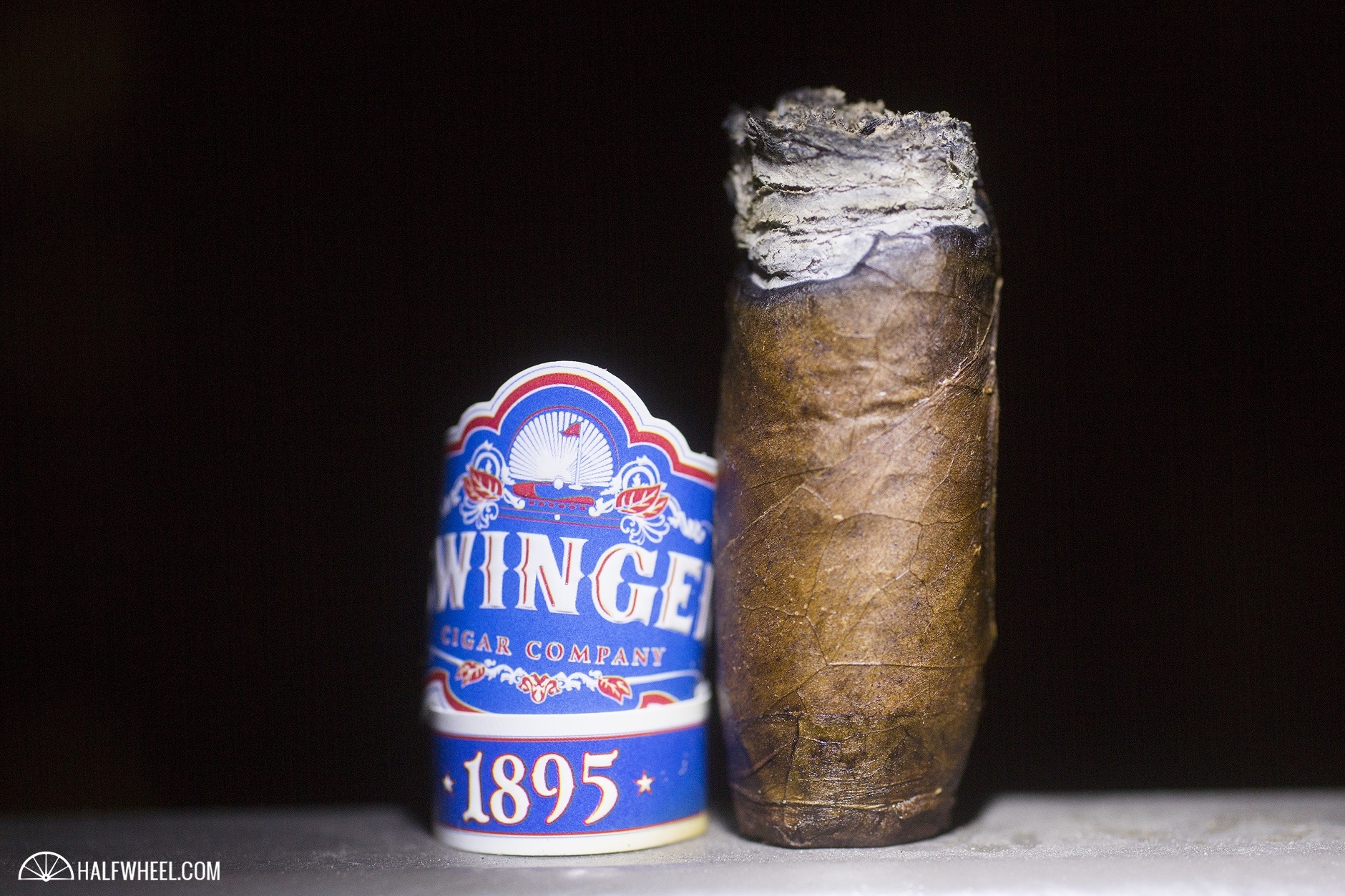 The vast majority of the Swinger 1895 wasn’t particularly great, but the last inch was phenomenal. I never expected the final puffs to be able to deliver the floral flavors after spending the middle portion being somewhat sour, but it did. Unfortunately for Swinger, our scoring sheet is based on the cigar start to finish, not just how it ends—and that’s how your buying decisions should be based. Under that approach, this is a pass for me.