Fifty years in the cigar business is certainly something to celebrate, and for Antillian Cigar Corporation, the party is spanning two years.

In 2014, the company released the Sosa 50th Anniversary Pirámides, a 5 3/4 x 55 figurado that was based on the Sosa Classic, though it replaced the wrapper with a Cameroon-seed leaf from an undisclosed country in Latin America. An extremely limited edition, just 60 boxes of 25 cigars were produced, a total of 1,500 sticks, and each box was signed by Juan Sosa, Nelda Sosa, Arby Sosa and Juan Sosa, Jr. This year, the festivities continue with the Sosa Half Century, a limited edition that comes in a 6 x 50 toro vitola and uses a wrapper varietal you may not have seen before, Mexican-grown Cameroon seed. It was blended by Juan B. Sosa and made at Tabacalera A. Fuente y Cia’s Factory No.4, where Sosa works as a production manager. It’s getting a much broader release, with 1,000 individually-numbered boxes of 25 cigars being produced.

While the company traces its roots back to the Miami factory that Arturo and Juan Sosa opened in 1964, the family’s tobacco lineage can be traced back to the early part of the 20th century, when Juan Sosa was growing tobacco in Cuba’s Taguasco region, located in the central Cuba province of Sancti Spiritus. The family also manufactured cigars and sold them on the island and beyond prior to arriving in the United States.

As such, the band on the Sosa Half Century reflects this via the mark 4.50.70 — four generations in the tobacco business, fifty years making cigars, and seventy years in tobacco. There is a certain shared palette of colors between the wrapper and band that leads the latter to fall into the former; while the gold helps it stand out a bit, it also lacks that visual pop that it seems many manufacturers are going for with their recent designs. As for the wrapper, the Cameroon seed produces a familiar color and texture: a matted, subdued shade of brown with an extensive network of small veins criss-crossing it and a few slightly bigger ones standing out visually that help to give it a dry and very fine grit. It’s a fairly firm cigar, and while the roll isn’t perfectly smooth, there doesn’t appear to be much variation between the foot and well-applied cap. The pre-light aroma is light and slightly sweet, making me think of oatmeal or corn flakes with a touch of sugar and floral fragrance, while the cold draw ranges from near perfect to just a bit firm and is fairly nondescript, showing a bit of light tobacco and bread flavors but no pepper or spice.

The first puffs of the Sosa Half Century are fairly innocuous and mild, offering a bit of thick bread crust and some pepper—though one sample starts off with a particular bang–but the flavor gingerly begins to come alive with just a sliver of ash showing, warming and adding oats and more pronounced pepper in the first quarter of an inch. The smoke is adequate if unspectacular in terms of volume, but certainly nothing to gripe about. Within about 20 minutes of lighting the cigar I get the first semblance of sweetness, more of a perfumed aromatic than anything at first encounter, but given my general fondness of Cameroon tobacco, I’ve had my radar on since the start for it. There’s a fair amount of evolution in both the flavor and aroma of the cigar during the first third, something that has kept my senses on alert and an aspect of the cigar that I really appreciate. The burn has been solid and fairly even to this point, with decent smoke production and an ash that holds on as decently as one could want. 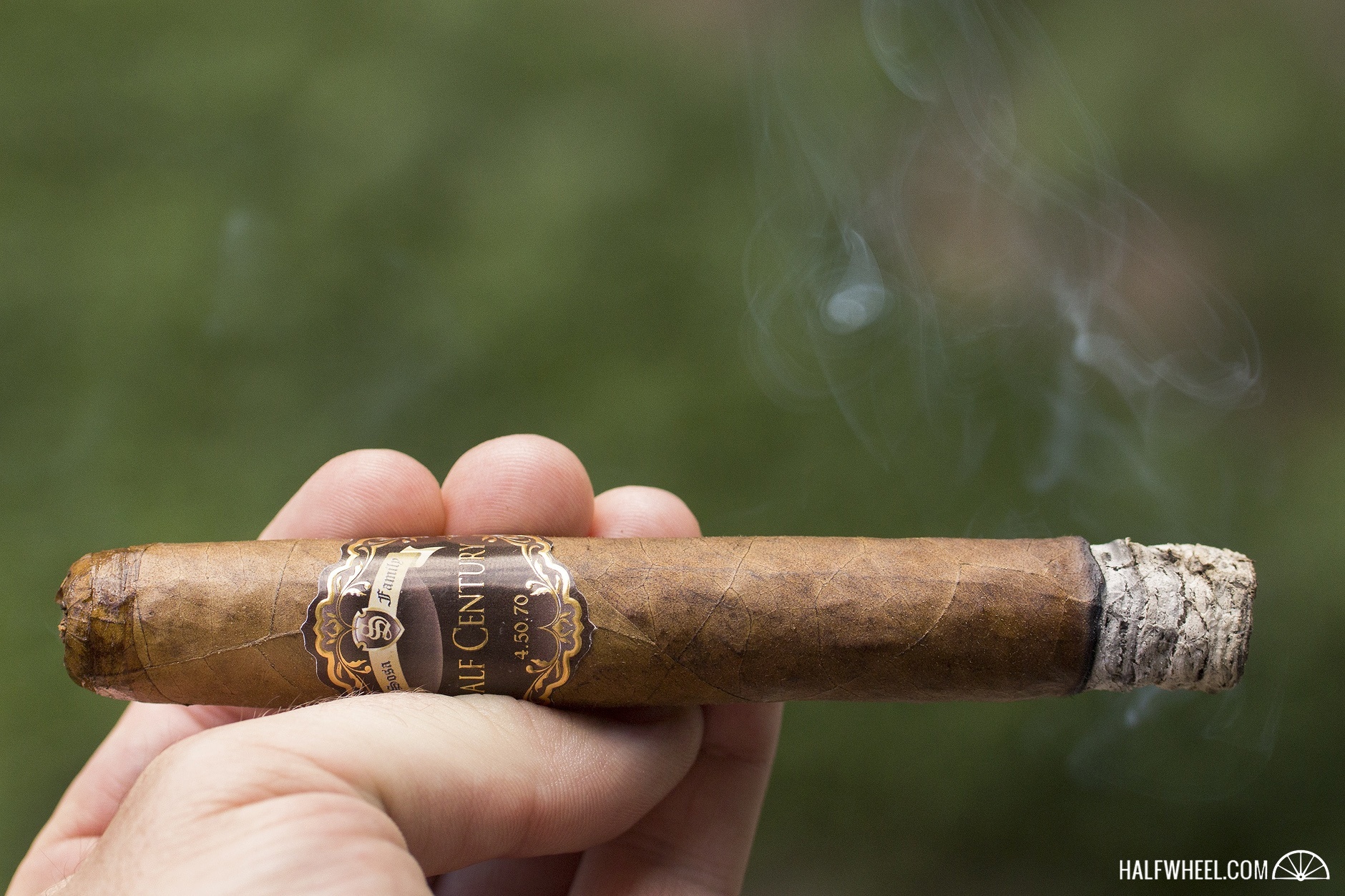 The flavor progression continues into the start of the second third, with it picking up just a slight bit of char and robust earth, giving the Sosa Half Century a slightly more aggressive stance than it had in the first third but remaining very agreeable on the palate. Given the combination of Mexican soil and Cameroon-seed, I’m still trying to figure out exactly what this cigar is offering, as I believe it’s the first time I’ve smoked this tobacco, and while I get aspects of both, there are also some differences between what I expect and what the cigar actually delivers. Retrohales also begin to show a bit more pepper and as such are a bit more challenging in the nose than they were earlier. At the midpoint the draw is as smooth as I could ask for, and while the flavor doesn’t always jump out and grab the palate, it does leave a warm and slightly peppery finish in the mouth to linger for a bit. It’s a well-balanced profile that does a good job keeping outright strength from the pepper and earth at bay while allowing the subtler, sweeter notes of the tobacco to come through as well. 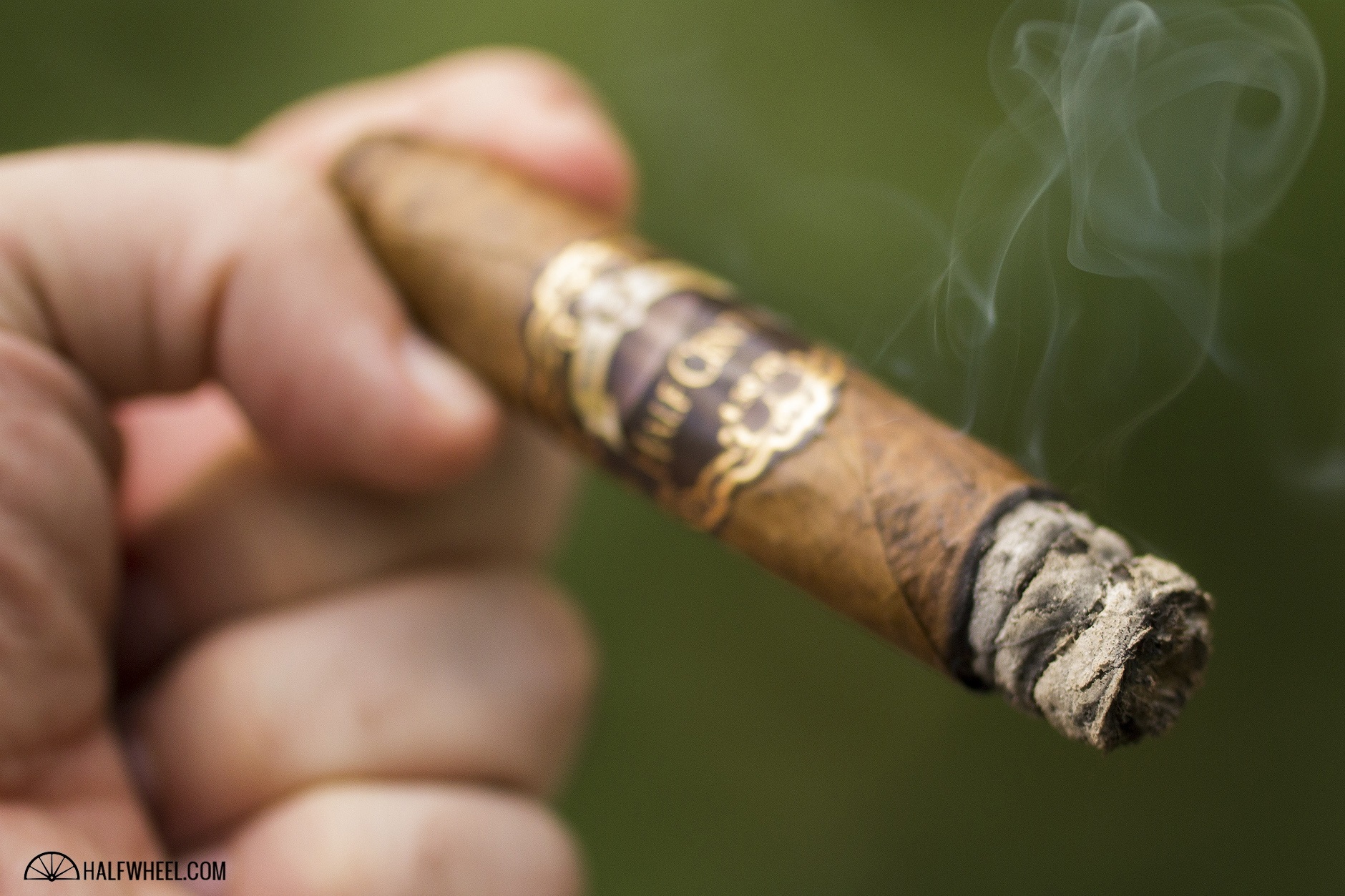 The start of the final third is where the Sosa Half Century really begins to come alive, waking up a peppery, earth-driven flavor and shifting the cigar out of the medium-minus category and solidly into a medium strength profile. Both the aroma and flavor have taken significant steps forward in strength, while the latter picks up a syrupy, tangy sweetness to add a bit of depth and complexity. There is also a varying amount of char from sample to sample, and while it’s not a bad addition, I find myself leaning towards the samples that don’t have quite as much. The burn line shows its first and only issue the final third, hitting an occasional rough patch on the wrapper that it can’t quite burn through and needing the assistance of a touch-up just to even things out. With that problem resolved, the cigar continues on to a small nub, never getting overly hot until the final inch.

To say my interest was piqued with the news that this cigar used a Mexican-grown Cameroon seed wrapper would be an understatement; as a fan of both traditional Cameroon and Mexican San Andrés tobacco, I was certainly interested to see what the result would taste like. While it’s neither as sweet as traditional Cameroon or as earthy and robust as San Andrés, the result is a solid balance between the two, which along with the binder and filler provide for a cigar that takes the senses on a very enjoyable flavor journey. While I struggled to find those moments of true brilliance, there also wasn’t a single spot that I didn’t enjoy, something that I rarely get to say about any cigar. The Sosa Half Century is certainly a fitting cigar for the company’s celebration and holds quite a bit of promise for the next 50 years.