While it has calmed down quite a bit in 2019, over the last two years, the cigar industry seemed to be enamored with the concept of collaboration, even if it wasn’t clear how much collaborating was actually going on.

Most of the time, these collaborations involved one company with a factory and another one without, but last year it became known that two people with notable factory and farming operations were making a cigar together.

As the second part of that sentence spells out, it’s a project between Abdel “A.J.” Fernández and José “Jochy” Blanco. For this particular release, the collaboration went a bit further than normal. The San Lotano Dominicano uses a brand that is owned by Fernández, but made at Blanco’s Tabacalera Palma factory while being distributed by Fernández.

Furthermore, the binder and some filler tobaccos come from Blanco’s farms in the Dominican Republic, while the Nicaraguan fillers are from Fernández’s farms in Nicaragua. It’s all wrapped in a Cuban-seed Brazilian-grown wrapper.

Six months after the cigar was shown off via social media, it began shipping to stores in four vitolas. 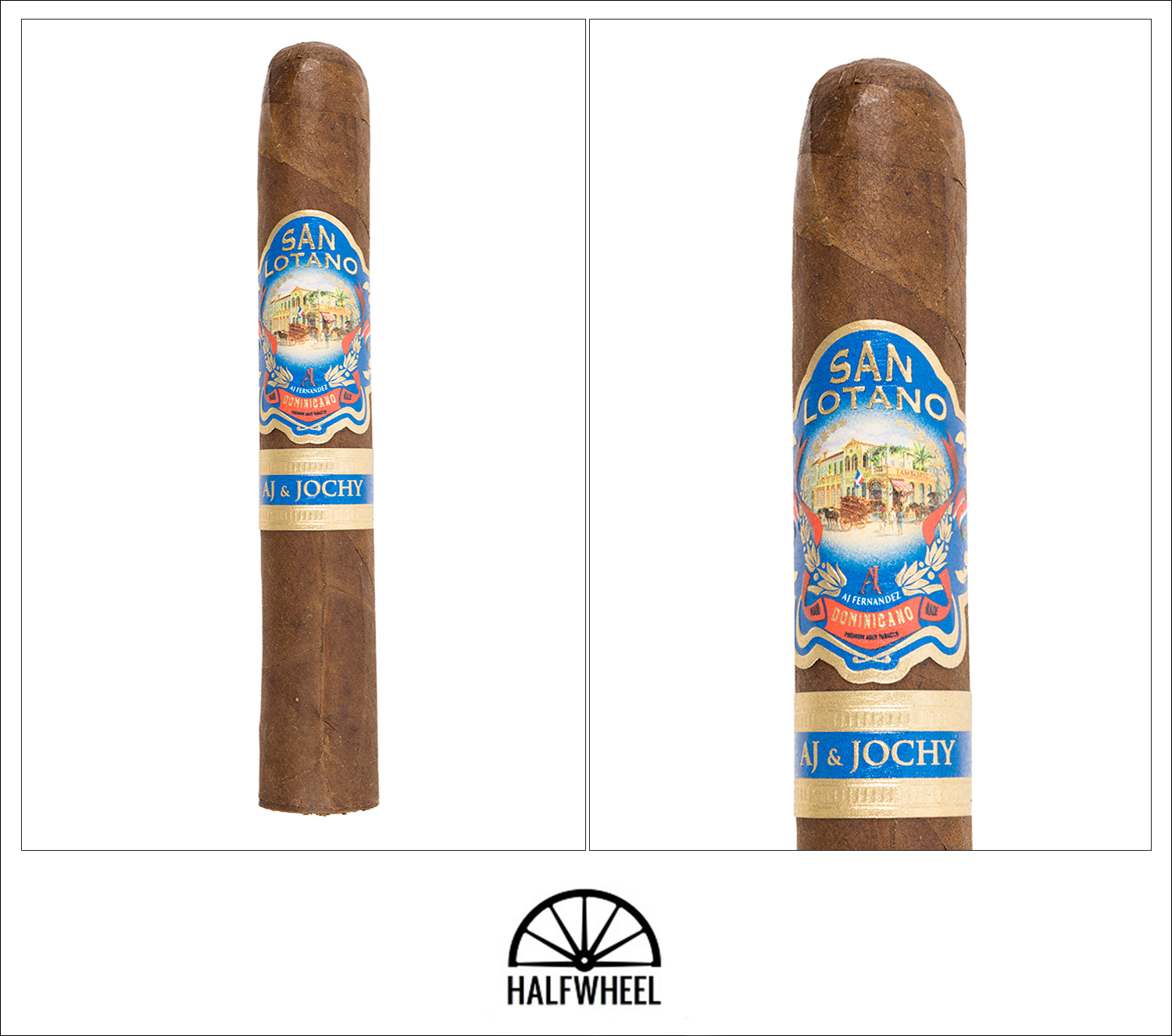 There’s a lot going on with the main band but it’s well done and I’m a big fan of how the colors come together on the two bands. The wrapper feels like parchment paper and has an aroma of sweet cocoa that reminds me of a chocolate cake with a bit of barnyard flavors towards the back, around medium-full. The foot is similar in intensity, though sweeter and cleaner with sweet cocoa, vanilla and some leather. From the cold draw I get some chocolate cake batter with a bit of pepper and touches of barnyard underneath. If I take a slower cold draw it basically tastes just like brownies.

The San Lotano Dominicano begins with earthiness, acorn, some bitter chocolate and a bit of white pepper underneath the tongue. All three cigars I smoke have earthiness, it’s just a matter of what else comes with it. In two of them, it’s a crisp and clean earthiness joined by Corn Pops, some generic meatiness and an underlying sweetness. The other sample is gritty with earthiness, potato chips, black pepper and a very bitter dark chocolate, i.e. none of the sweetness I found on the pre-light examination. Retrohales have potato chips on top of earthiness before a touch of floral flavor adds itself to the mix, but the earthiness then drowns it out. Flavor is full, body is medium—which I would say is noticeably thin—and strength is medium-full. Construction is great on two cigars, while the one with a grittier profile needs a touch up in the first third and has a rather loose draw. 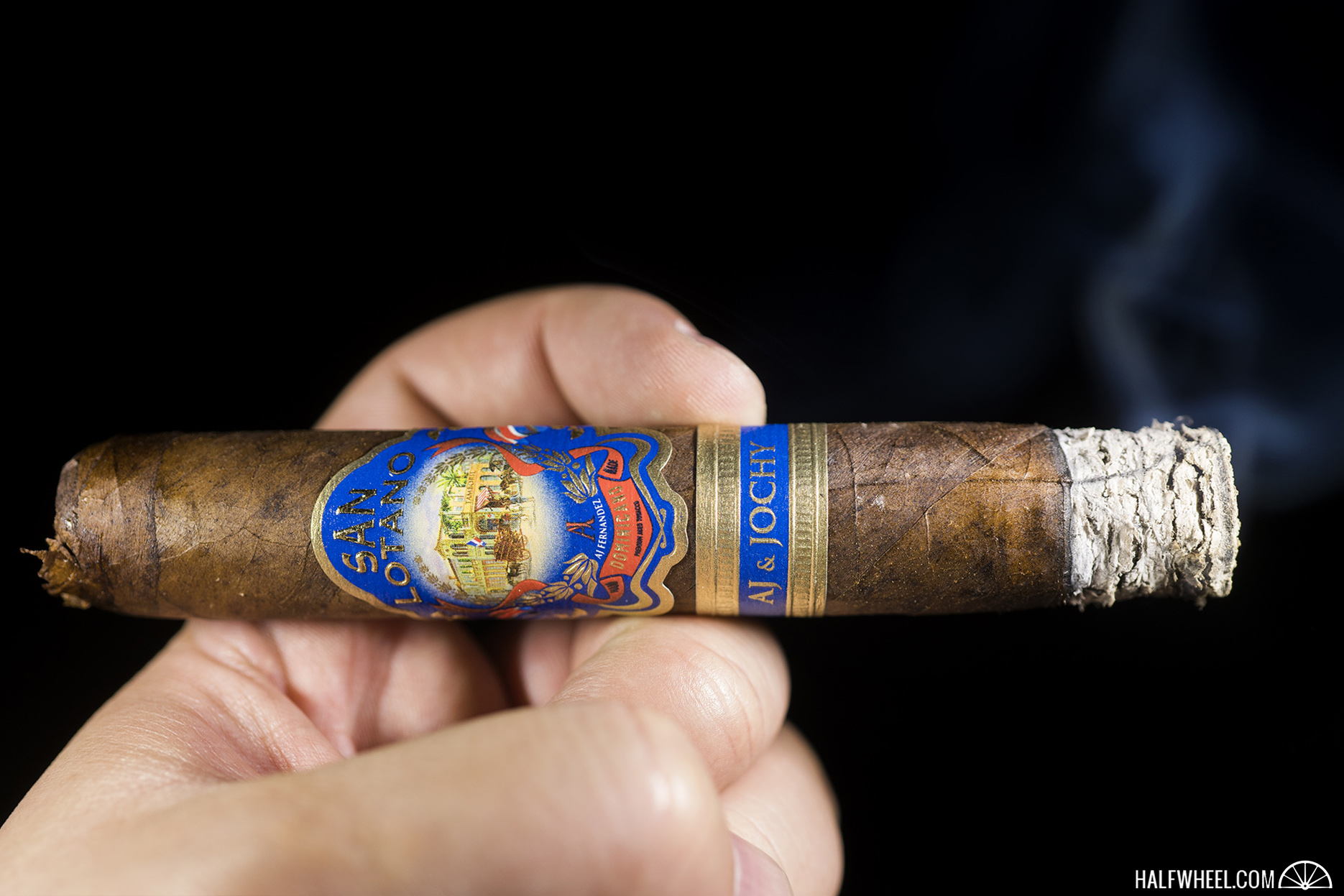 It remains a tale of two cigars in the second third of the San Lotano Dominicanos. Two of the cigars continue with a developed earthiness, damp woods, cedar and a vanilla sweetness. Retrohales have an underlying sweetness—though not as vanilla-like—along with some earthiness and a finish that reminds me of gyro meat. The other cigar continues to struggle with the draw and the flavor is a more generic earthiness, saltiness, creaminess and some sunflower seeds. Flavor is full, body is medium-plus and strength is medium-full. The two cigars with good draws just need a minor touch up between them, but the other sample is struggling and I suspect it is due to the draw, which isn’t getting any better. Predictably, the paths of good and not good continue in the final third. Flavor-wise, it’s both the best and worst of the experience. On the two cigars that are constructed well there is a hearty vanilla over some coffee bean and meatiness with saltiness on one side of my tongue and raisins on the finish. The other cigar is an earthy and toasty mess probably due to the draw—which isn’t producing very much smoke—and the constant touch-ups. Flavor finishes medium-full, body is full and strength is medium-plus. Two of the San Lotano Dominicano Robustos were good, but probably not great. I really enjoyed the progression, starting quite earthy and sweetening up as the cigar burned down. Furthermore, the fact that the final third was the best third is always a nice touch for me, a reward for smoking the cigar instead of an encouragement to end it quicker. However, one sample wasn’t close to being good and fighting a cigar that didn’t really want to be smoked for over two hours is the most notable memory I have with the San Lotano Dominicano. For $8.50, I think there’s some value to be had but this certainly isn’t close to the best cigar in either Blanco's or Fernández’s portfolio.