In 2010, Viaje continued its then two year-old tradition of selecting two retailers to receive an exclusive cigar from one of its two core lines, Oro and Platino. For that year, Habana Smoke Shop received a Short Figurado from the Oro line called La Pequeña, while The Humidor selected what was the biggest Viaje to date from the Platino line. Aptly named the Five Fifty Eight, The Humidor received 50 boxes of a 5 x 58 Parejo. The Corojo 99 wrapper seems particularly oily for the Five Fifty Eight. It’s dark with pronounced veins and an overall great dark leather hue. There’s not much off the wrapper: a bit of leather and barnyard, probably thanks to the lack of cellophane. Given the great closed foot, there’s much else there as well. Cold draw off the Viaje is incredibly open with a strong cashew note and then the typical AGANORSA sweet brownie cocoa. There’s also some great hickory and sunflower notes that make the medium-full cold draw truly unique.

The first third begins with an absolutely great aroma off the massive Viaje followed by a dry profile that begins with cedar before buttering to nuts and then a touch of pepper. For the first five minutes, the Five Fifty Eight is a lot milder than one would expect , but eventually the pepper and strength kick in that order. It settles to a core of cedar and leather, both rich and developed, with a sweet undertone and some heavier earth on the finish. Unfortunately, the draw is predictably open. 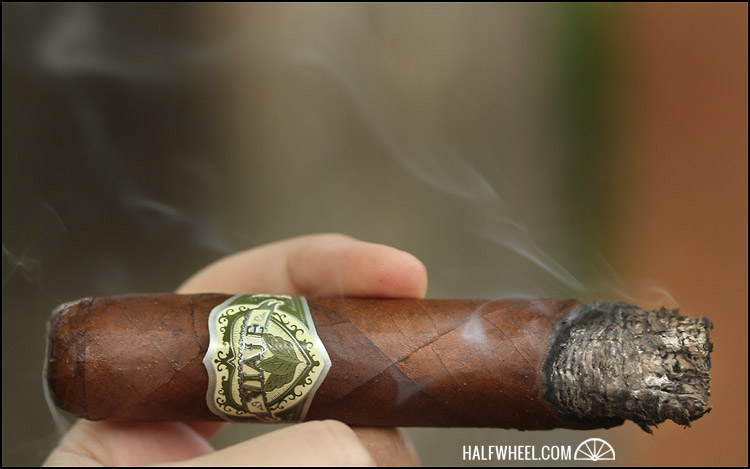 After a few touch-ups, the second third settles with a bit more of a cocoa note and a much stronger leather. It’s a welcomed change for the Viaje and also seems to rid the profile nearly entirely of its aforementioned dryness. Smoke production is great, at some times just plain excessive and the draw is slowly tightening, although still very much open. The final third seems a much heavier dose of strength and a bit more cedar as well. For the first half of the final third, it doesn’t seem as if the profile changed at all from the second third outside of the cedar, although eventually things start to wind down. Even at its tightest points, the draw of the Five Fifty Eight is still open, which isn’t great. Not my favorite Viaje line, not my favorite vitola. Still, this was a good Viaje. With a bit of time in the humidor and perhaps a less-complicated size, the cigar performs well. Tighten the draw a bit, which I unsuccessfully attempted via dry-boxing, and a bit straighter burn and there's really not much to complain about. I'd still take the Platino Lancero over this, largely because of the fullness and format, but the Five Fifty Eight might just have more complexity.