The first time we heard of the interestingly named Honey and Hand Grenades from Viaje was at the IPCPR show in Las Vegas in mid-2011. Farkas was seen handing out samples to a few people to try with no other info given except the name, the interesting vitola and the fact that it was supposedly based on the Exclusivo blend.

Flash forward to March of 2012, and Andre Farkas sent stickers to retailers in the shipment of the Super Shot 10 Gauge reading, “VIAJE HHG THE SHIV THE SHANK THE RAPIER IPCPR 2012.″ The logo was that of an insect with a grenade in the place of its abdomen. 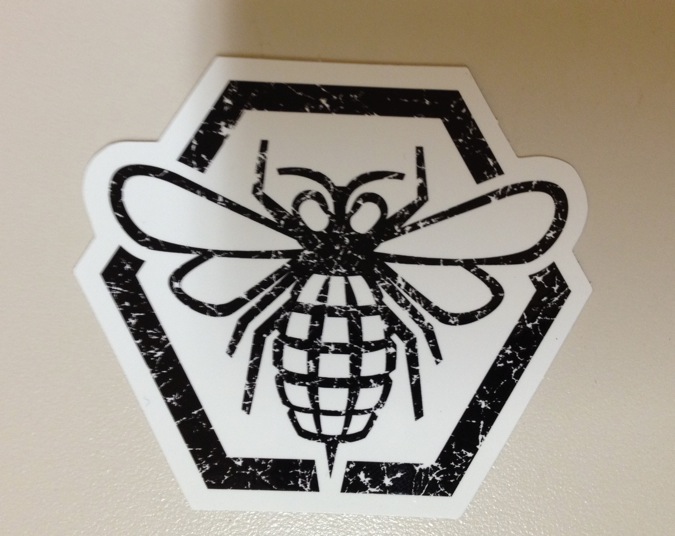 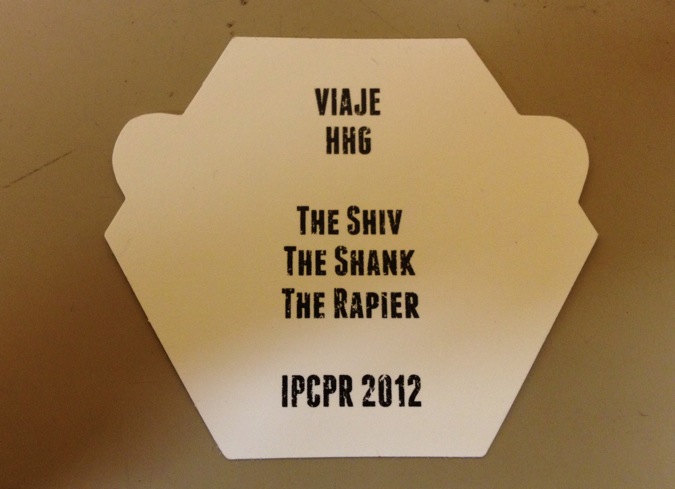 Then in April of 2012,  Farkas posted some photos of the stickers on Facebook with that peculiar logo on them that were stuck on some cigar molds and other cigar related stuff. 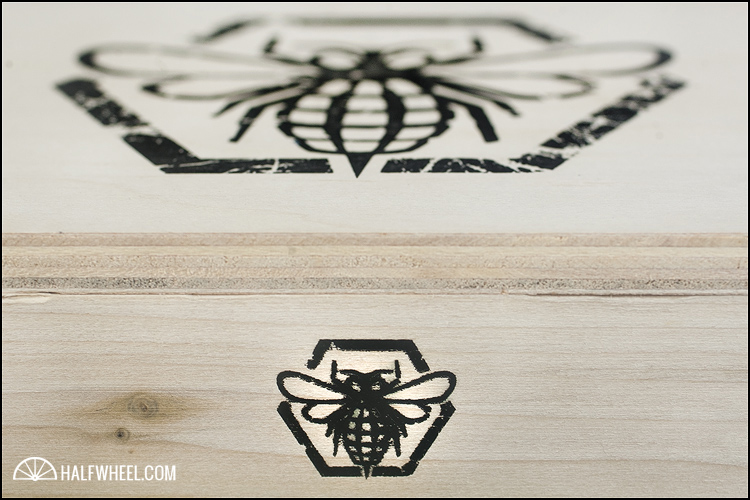 Not much more was said before the release, but at the IPCPR show in Tampa, Farkas said this about the blend in the interview that Stogie Review posted:

A lot of time went into this cigar… I have been blending it for a long time. It took about four or five months to blend it. It has a unique shape, a Torpedo foot and a round head. All of the names are all names of weapons… after you stick someone, well, the blade gets red, so there is the red foil.

The Viaje Honey & Hand Grenades shipped in three different violas. They are (top to bottom):

The Viaje Honey & Hand Grenades come in boxes of 25 with only 300 boxes of each vitola released. The Viaje Honey & Hand Grenades is a sight to behold and will never be mistaken for another cigar on the market on looks alone. The first thing you notice is the bright, metallic red wrapping that covers the cigar from the bottom of the band to the end of the foot. Then, you notice the vitola, which is a cross between a Figurado and a Lonsdale with a pointed foot and round cap. The wrapper is a dark espresso brown color and is almost devoid of oil, but fairly smooth to the touch. It’s spongier than normal, but seems well rolled. The aroma off the wrapper is a combination of manure, barnyard and coffee.

The first third of the Viaje Honey & Hand Grenades starts off with a distinct flavor of wheat cereal, a dark chocolate, wood and a slight meatiness that adds some interest. There is a nice amount of sharp pepper on the retrohale and just a little spice on the lips — enough to notice — but not much more than that. Smoke production is above average and the burn and draw are excellent so far. Strength starts out at just under medium and is only getting stronger from there. Coming into the second third of the Honey and Hand Grenades, the flavors remain the same for the most part, but the amounts shift so that the meatiness becomes dominant with the wheat note receding to the background. The major change is a noticeable about of harshness that comes and goes throughout the second third. It is not bad enough to affect the profile in a negative way, but it is noticeable. Other flavors include oak, leather and bitter espresso. The burn and draw continue to impress, and the strength takes a major jump ending the second third at just under full. The final third of the Honey and Hand Grenades stays the course profile-wise, pretty much in line with the second third — strong meatiness, oak, leather and coffee along with just a touch of generic sweetness. There is substantially less pepper on the retrohale and the spice on the lips from the second third has all but disappeared. However, the strength in the blend continues to increase and ends the cigar well into the full category. Construction is fine and the nub is cool to the touch when I put it down for the last time. While this blend is supposedly based on the Exclusivo blend, I honestly noticed very few similarities between them. The Honey and Hand Grenades is quite a bit stronger than the Exclusivo, and has a charred meatiness note that I have never tasted in any of those blends. There is no doubt that this is not the most complex of blends and there is also no doubt that they are young, although the youth seemed to manifest as more of a harshness in the profile as opposed to a bitterness. Having said that, I enjoyed the cigar, I will be picking up more of them and I think that the Honey and Hand Grenades have quite a bit of aging potential down the road, which can't be said of all of the recent blends Farkas as released.