The Viaje Holiday Blend debuted in 2009 with a single 5 x 54 size but has since evolved to be a release comprised of two vitolas each year. In 2012, Viaje added the first barber pole version with the Holiday Blend Candy Cane and Holiday Blend 2012 becoming the eighth and ninth releases in the collection.

They are, in order of release date: The Viaje Holiday Blend 2012 was shipped in December 2012 along with the Viaje Holiday Blend Candy Cane, a second batch of the Viaje Friends & Family and the delayed-from-Thanksgiving White Label Project Stuffed Turkey in both White Meat and Dark Meat. Needless to say, this standard Holiday Blend release was sort of an afterthought of Viaje’s winter shipment to retailers, only being mentioned or featured in the background of the Candy Cane photo that Andre Farkas posted to Facebook on Nov. 15, 2013. 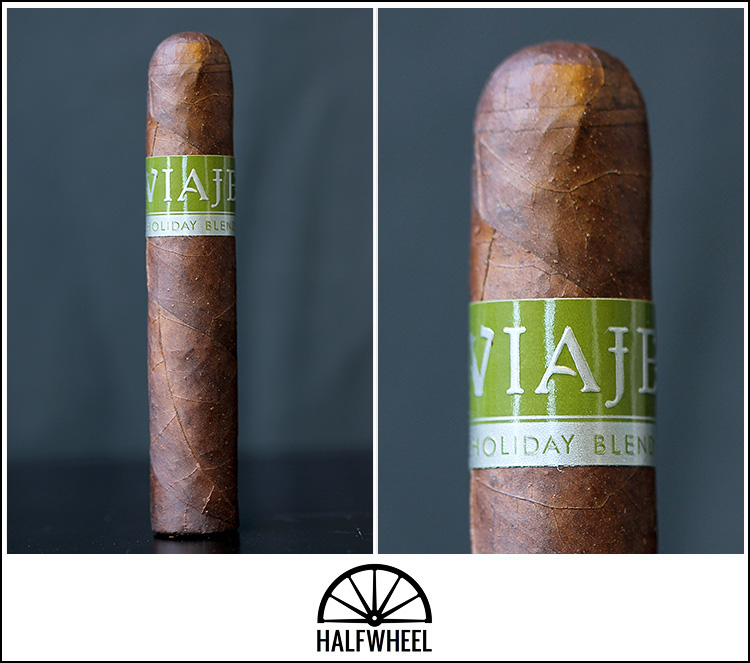 The Viaje Holiday Blend 2012 wrapper is an oily, rich brown with spots of toothiness and a few well-defined but sleek veins. It’s firmer in some spots than others, but never shows a particularly underfilled spot. The pre-light aroma is both sweet and saucy, reminiscent of a steak marinade or teriyaki sauce as well as fresh beef jerky—all very enjoyable and seeming to scream complexity. The cold draw is easy, a bit spicy but no real pepper, heartier and meatier than the pre-light aroma was.

While it wasn’t noticeable on the pre-light aroma or cold draw, notes of rich barnyard come off in the smoke as soon as the first third is lit, backed by a hearty amount of both spice and pepper. There is also a bit of umami flavor here, a not outright but definitely savory component to the flavor profile in the first inch or so. The flavor quickly adds a chalky note and becomes a bit airier and drier before the burn line has progressed even quarter of an inch up the foot. Clouds of white smoke billow off the cigar when it’s being puffed on and for a few moments while it’s at rest before the valve seems to close up and it’s hard to tell that the Viaje is even still lit. The burn line gets a bit wavy about half an inch in as a dark gray and black ash is revealed. About an inch in, the flavors have mellowed noticeably, reminding me of aged red wine that has had the chance to get out of the bottle and rest in the glass. The retrohale still has a decent yet tolerable amount of pepper. A faint of hint of dark fruit sweetness starts to come out in the second third of the Viaje Holiday Blend 2012 – maybe it’s that wine note that’s lingering in my brain planting a suggestion, but there is a distinctive note that has started to emerge. With the ash stretching to almost the midpoint before finally giving way to its own heft, the flavor shift continues into a dry spice before picking up some earth and additional pepper. There is also a very faint lemon note that seems to be lurking in the background and is more noticeable in the nose than on the palate. It’s so faint that it’s hard to tell if it’s coming from the cigar or might just be something in the ambient air, but either way is both unexpected and enjoyable. 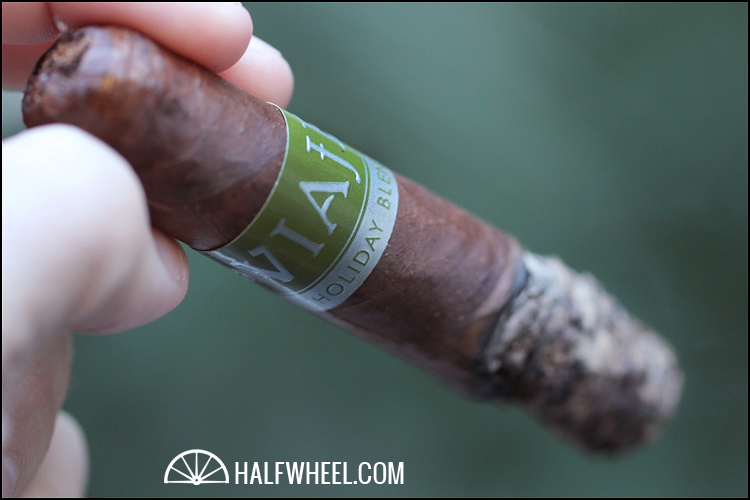 Changes are few as the band comes off, and it’s not until you realize you’re in the home stretch of final third that the Viaje Holiday Blend 2012 ratchets up the pepper, particularly in the nose. Smoke production has tapered way down from where it was early on, though the other technical aspects have been very good overall. No touch-ups have been needed so far, and the burn line has been by and large straight and sharp. Chalk enters the equation in the final inch and a half, providing one more flavor transition along with a significant increase in smoke production pushes the cigar to the point where it’s too hot to smoke any further. Viaje has accumulated a fair number of connotations, both good and bad, in its relatively short history. The Viaje Exclusivo remains a personal favorite and a regular go-to, whereas other cigars have had burn problems that made the cigar almost unsmokeable and others lacked any real flavors or complexity. The Viaje Holiday Blend 2012 Petit Robusto has neither of those problems and delivers flavors that are almost on par with the Exclusivo. It's not quite as refined, but the flavors are very, very good, the transitions are pronounced, the pepper is prominent in all the right places and the technical aspects are about as good as you could ask for. While I don't know where I would rank this in the grand scheme of all things Viaje, I do know that it would rank fairly high.