There is no need to reword what’s been written before, so I’ll let Brooks briefly explain the Exclusivo line:

There has been a growing trend in recent years for the makers of cigars to release the blends that they make for themselves to smoke as limited releases for the rest of us to enjoy. Much like Pete Johnson’s Black Label and Steve Saka’s Liga Privada No. 9, the Viaje Exclusivo blend is said to be Andre Farkas’ personal blend.

It might not be the most original idea, however, it has been well received among Viaje fans with the Exclusivo line selling each limited release out quickly.

There have been a total of ten different Exclusivo releases: 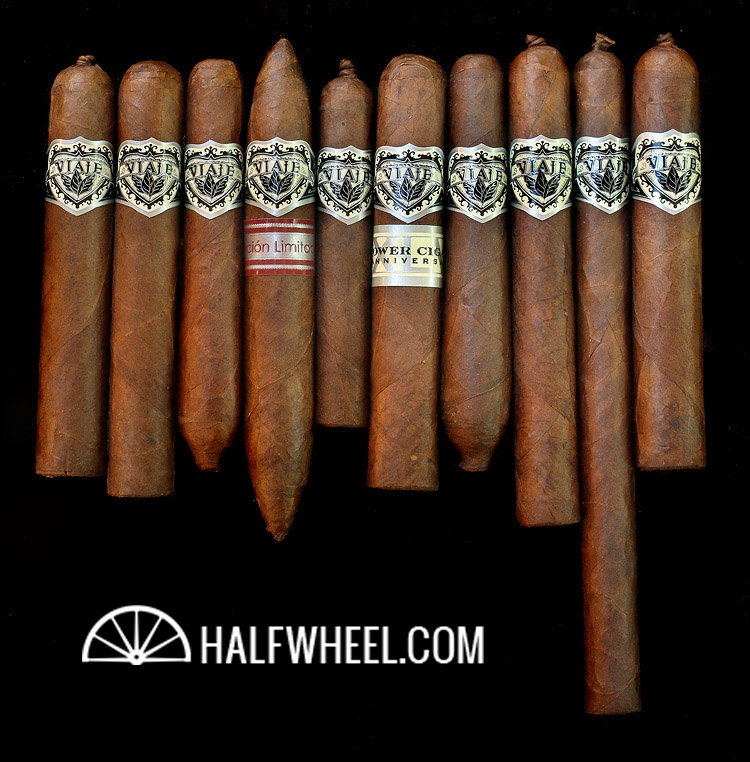 (In order of appearance from left to right) 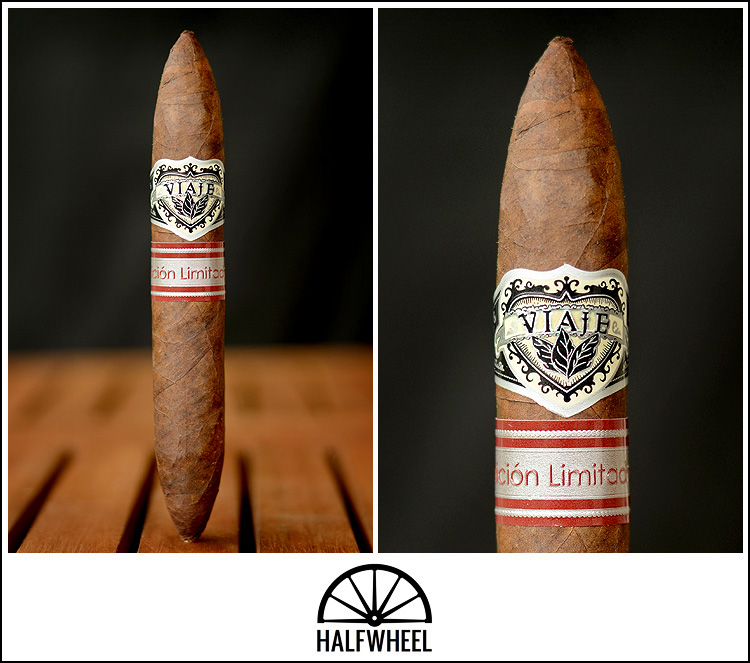 The Viaje DES has a mottled brown wrapper with black streaks throughout. There aren’t any veins to speak of and the wrapper is completely seamless with a light dusting of plume. The band is a very ornate silver, cream, and black design that is complemented nicely by the silver and maroon Edición Limitada band. Capped on both ends, the Double Torpedo has a very unique appearance. The cigar is firm and has a little give, however there are no soft spots. A very sweet hay and tobacco aroma is coming off the Nicaraguan wrapper, which I would almost describe as barnyard notes, but it’s too sweet for that. The cold draw brings extremely sweet raisin and cedar notes.

With the initial puffs of the first third I’m inundated with the sweetest, chocolatey, notes of coffee I’ve ever tasted in a cigar. From what I’ve read and expected from the Exclusivo line, there is absolutely zero pepper so far in the first third. After about 10 minutes some great woodsy notes develop; almost cedar but it’s so faint I can’t specify exactly. The draw is perfect which I wasn’t expecting with only barely clipping both ends of the Viaje. There is great smoke production with very little effort. Towards the end of the first third hints of cinnamon start to develop, but more along the line of a Red Hots candy cinnamon. 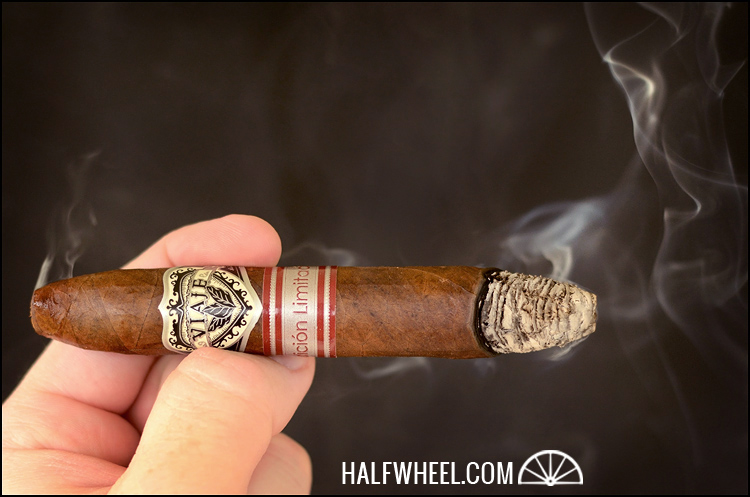 The second third of the cigar starts out a little milder on the flavor side. Intensifying from the first third is the cinnamon, but the large woodsy notes and sweet milk chocolate have faded into the background. The DES is still burning perfect even after making it past the Torpedo foot. The notes all have a nicely developed creamy undertone to them at this point which work well with the overall sweetness of this cigar. All of the notes are sharp and crisp at first but fade very quickly leaving you with a very short finish that leaves you longing for more. 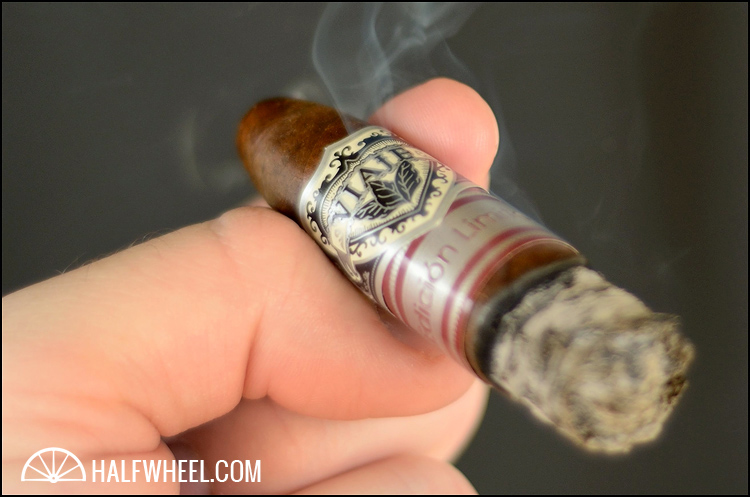 By the final third the Double Edge Sword has mellowed quite a bit. Smooth, creamy, and woodsy notes are really all that’s left with only hints of the previous cinnamon, milk chocolate, and coffee. Throughout the cigar the ash gets to about an inch before falling off speaking well of the construction. While still sweet, the cigar isn’t nearly what as intense as it was at the beginning. It’s starting to heat up a bit but isn’t getting harsh or bitter because of it. 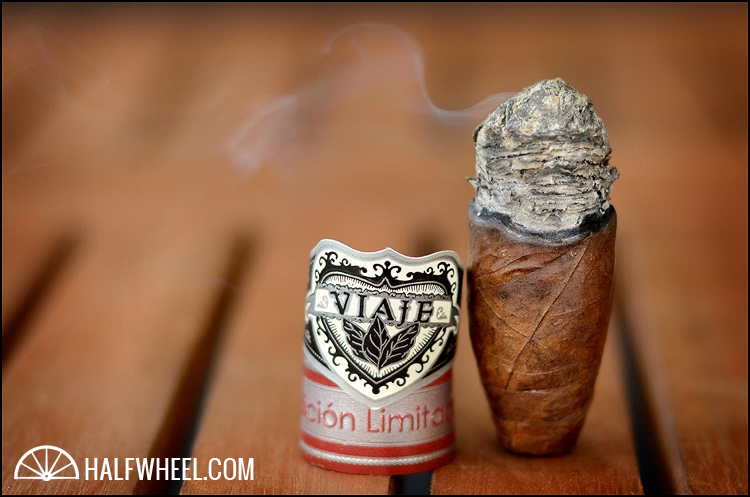 For a Nicaraguan puro, the Viaje Double Edged Sword didn't inundate me with pepper or beat me over the head with strength at all. Perhaps  this is due to the two years of age that it has, but I found it allowed the amazing flavors to really shine through. I'm really disappointed I only grabbed one of these off a friend way after their release and only got around to smoking it two years later. These are definitely hard to come by now and can easily fetch $15-20 in the secondary market. As previously stated this is actually the first Viaje I've ever gotten around to smoking and I enjoyed it a lot. Great flavors, flawless construction, and an interesting vitola kept me interested and turned me on to the brand. With these being a very limited release from two years ago I can't say run out and buy one today, but if you come across any for sale don't hesitate to snatch them up even at a slightly inflated price.