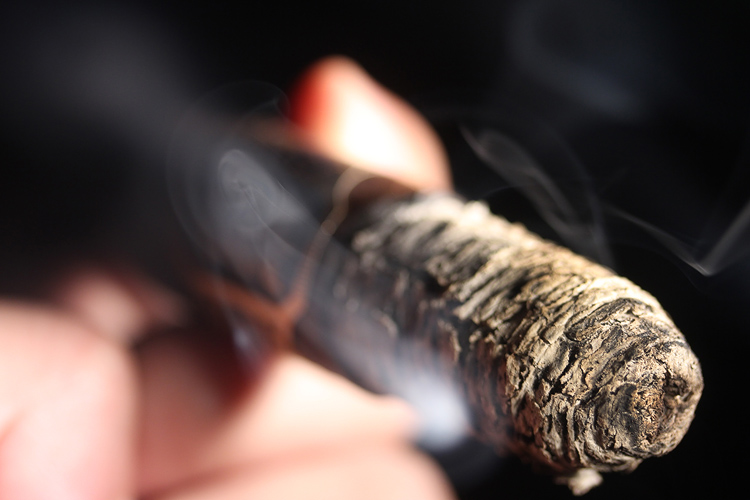 Back in March we were tipped off via one of our Dutch readers about a new Undercrown, a Flying Pig. While in Holland visiting accounts, Jonathan Drew of Drew Estate agreed to make the unique size in Drew Estate’s newest blend for the region.

The Flying Pig was introduced in 2009 as a limited edition for the Liga Privada No. 9 blend. Drew Estate President Steve Saka provides this detailed explanation:

Fwiw, I believe under the Dunhill marquee a very similar shape with the same name was made in Havana in the 1940’s, but they were not the first to make it. Given its amazing success, I expect others will copy it soon…

At the 2010 IPCPR show, Drew Estate introduced the second version of the Pig the T52 Flying Pig. And at last year’s show a new larger Pig was announced as the Feral Flying Pig became part of Drew Estate’s Único Serie. Also at the IPCPR was Drew Estate’s new Undercrown, a sort of cousin of Liga Privada.

Inside each box of Undercrown is an explanation of how the line came about:

In early 2009 was asked our torcedores to smoke less Liga Privada cigars because they were leaving too few to b exported. This request was met with the disappointment you would expect, but rather than being disgruntled they responded by blending their own signature liga.

Incorporation many of the same rare tobaccos, but of different vintages and primings, the cigar they created was no mere replacement. Rather it is an exceptional smoking experience of uncompromising quality and flavor that deserves to be smoked by all.

It is always the master makers who are heralded, but the reality is that great cigars are the product of many talented people, most of whom toil in factories with no publicity ever. They are the uncelebrated heroes who make all of our lives more pleasurable with the cigars they craft. And therefore, it is with great pleasure that we are now sharing their factory floor creation with you as Undercrown, borne of our worker’s ingenuity, resourcefulness and passion for a great cigar.

And then in March, as the world waited for the newest Undercrown, ¡Corona Viva!, we published the full details about the Undercrown Flying Pig:

Holland will be getting a new Undercrown. Drew Estate’s popular Flying Pig vitola will return as a limited version of their newest brand, Undercrown.
Jonathan Drew confirmed that it will be a limited regional release for the country he visited earlier this year.

Drew originally posted the following (in Dutch) on a Dutch forum a few weeks ago:

“Flying Pig” UNDER CROWN XLR:
People who know Drew Estate quite well, understand that we are a company that does not makes many cigars for other companies. In fact we only have one private label brand, and this is the “JAVA by Drew Estate” that we excusively (sic) for Rocky Patel.
But we are working on something very special for a group of retailers in the Netherlands I am very excited about – a Flying Pig in the UNDER CROWN blend. For now I’m calling this Limtied (sic) Edition “XLR” (Xtremely Limited Reserve). It is not limited by constraints on the tobacco. To be honest, the Flying Pig is an extremely difficult cigar to produce and that dramatically slows the production floor in the factory.
This special project is officially in motion. More information will be provided in the near future. I think we got the blend just right.
best, JD

(Editor’s note: the above is translated the link above is the direct text.)

“The cigars are in production as we speak and should be ready to ship to Holland sometime in June,” said Drew to halfwheel. “Saw them today on the production floor.”
Undercrown Flying Pig, which will shed the XLR name, will be limited to the Compaenen stores, which operate locations throughout Holland. It will be the smaller Flying Pig vitola, as opposed to the Feral Flying Pig vitola that is currently being made for the Único Serie.
When asked if they were coming to the U.S., drew Didn’t seem optimistic.
“Well, I just don’t know as (the Flying Pigs) are a major pain in the ass to make.”

At the end of June the cigars arrived in Holland. Instead of the 70-100 boxes originally planned, there were actually 205 boxes made. Only 195 boxes will go Holland, as Drew Estate is keeping ten boxes for internal use. The 195 are split up between three shipments of around 70 boxes.

The boxes of the Undercrown Flying Pig look like this: 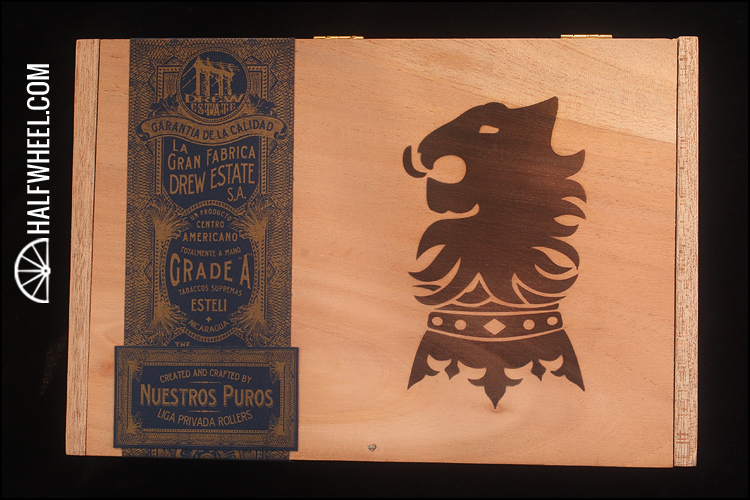 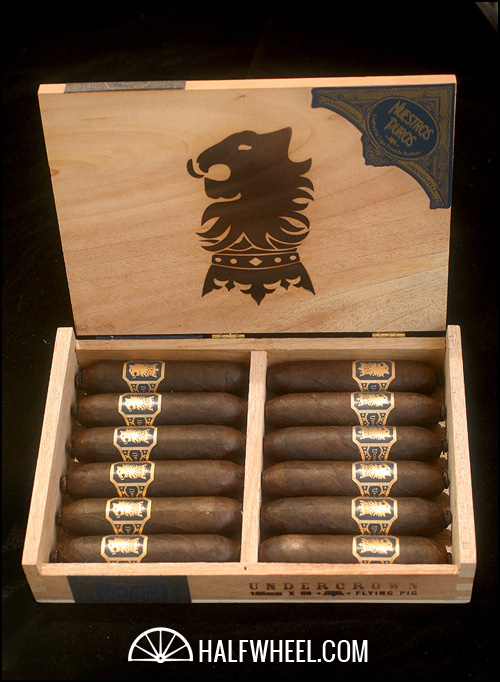 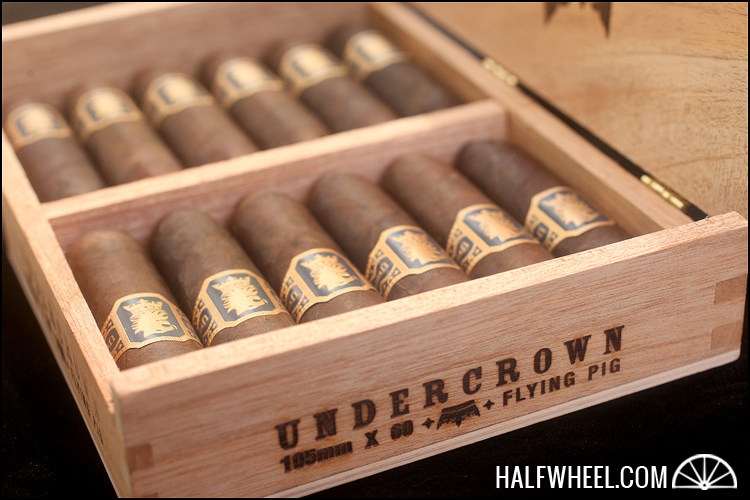 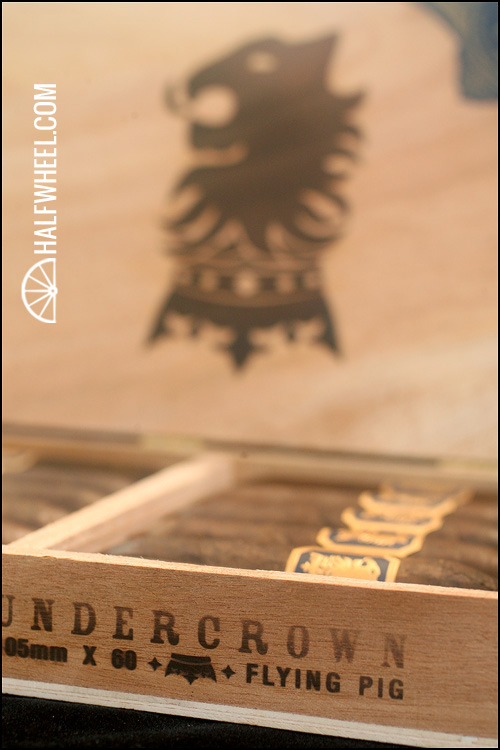 Here’s a picture of all the production released Pig vitolas from Drew Estate: 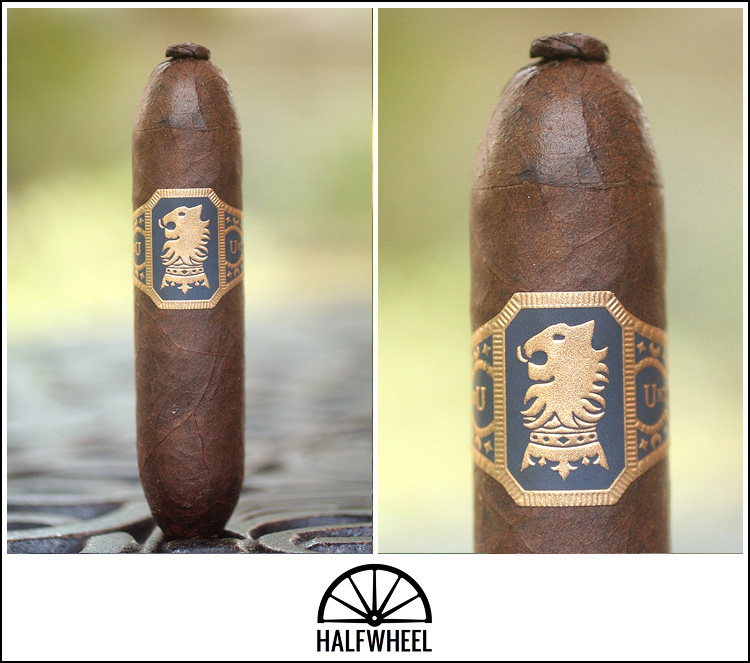 It’s what you’d expect. The matte bands on Drew Estate’s somewhat signature size. As you can see above, while the San Andrés wrapper is both dark and full of oils, it doesn’t stand a chance compared to Liga Privada. While the boxes of the Undercrown Flying Pigs smell good, the cigars themselves are pretty good as well. There’s some dark leather and earth aromas, it’s not an explosion like Liga—even with the cellophane. The cold draw is a bit open and shows a bit of youth, but the flavors are already pretty well-developed: roasted and dark nuts try to compete with the dominating cocoa note and a touch of cherry. For those wondering, the foot seemed entirely overwhelmed by the wrapper.

The first third begins with a great stark dark earth aroma, it’s really the first time I recall this happening with an Undercrown, particularly being this noticeable. As for the flavor, it’s a sweet cocoa, earth, nuts, a bit herbal and touches of coffee and vanilla. Sweet, but earthy. It takes a little while, but the black pepper develops on the finish of the Undercrown Flying Pig and shortly thereafter the flavor comes into its own. There’s sweet cocoa, earth, herbs, toastiness and touches of black pepper. Where the cigar shines is the finish a wonderful sweet earth and caramel. As is the norm with seemingly all things Liga Privada and Undercrown—smoke production is insane. Into the second third and the most noticeable thing is the strength. It wasn’t really present in the first third and it’s now a medium-full rendition, still a bit away from the Corona ¡Viva! Flavor is much toastier with cocoa, sweet nuts and earth. It’s still easily described as an earthier and bittersweet rendition of the Undercrown profile, but there’s quite a bit going on. While the smoke production is legendary, the draw has gone from open to wide open and I don’t have any control. Also of note, root beer through the retrohale, which is a new one for me. The final third is actually much like the first third, the cocoa returns in fuller force with the toastiness subsiding for a much more herbal earth. I won’t say the strength has picked up, but it’s definitely more noticeable. Smoke production and draw remain the same: one stellar, one frustrating. With about three quarters of an inch left the flavors begin to transform into one, it’s not bad, but it’s a good sign to end. Oh yeah—there’s the ash. Because it's what everyone is wondering, let's get it out of the way. Better than the No. 9 Pig? Nope. Better than the T52 Pig? I liked it more. Better than Feral Flying Pig? Two different cigars—push. Better than Corona ¡Viva!? No. Better than a regular Undercrown? Yes. Perhaps most interesting—better than I expected. Despite the youth, the vitola was earthier and more detailed than most of the other Undercrowns I recalled smoking and unlike the No. 9 or T52 renditions, I wasn't frustrated that the flavor of the vitola had to be ruined by the shape itself. There is no doubt that a month in the humidor, where the cigars can dry out a bit more and the flavors can settle a bit more, will improve the Undercrown Flying Pig. But most importantly, unlike the No. 9 or T52 versions, I'm going to have to stop myself from reaching for these versus a regular Undercrown, something that just doesn't happen now. Is it worth the hoops and stress you are inevitably going to have to go through in order to pay $20+ for one? Probably not. But, if you get a chance to get some without the hoops, shipping costs and language barriers, like say in the comments below, I wouldn't waste the opportunity.