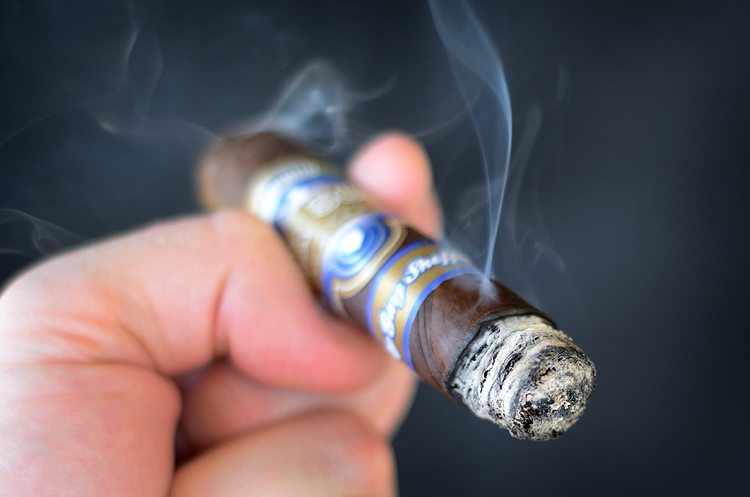 The Rocky Patel HR 500 was another one of the multitude of cigars that Rocky Patel showcased at IPCPR 2012. The cigar was created to commemorate noted cigar smoker Gary Sheffield hitting over 500 home runs during his career.

Rocky Patel announced the cigar with a press release in late July:

HR 500 is a special celebratory cigar blended to commemorate baseball great Gary Sheffield’s milestone 500th home run. This special edition brand is limited, much like Sheffield’s own exclusivity being only one of 25 MLB players to hit 500 or more home runs in his career.

HR 500 is blended with a dark Ecuadoran Habano-seed wrapper along with filler tobaccos from Honduras and Nicaragua and a Honduran Jamastran binder. This medium- to full-bodied cigar is balanced with flavors of sweet spice, pepper and coffee. The wrapper has a very even dark chocolate color to it. A few veins are noticeable though there is a smooth and slightly oily feel to the wrapper. There isn’t a lot of give to the cigar, but I wouldn’t say it’s hard either. The aroma off the foot is a singularly strong freshly cut hay note. The cold draw of the Rocky Patel is very unique with almost a minty, spicy kick that I can’t say I’ve ever tasted in another cigar before.

The beginning draws of the first third bring the aforementioned spice and just a hint of the mint note. Quickly, the mint note turns into a very green and fresh floral profile. The draw is fantastic, burn is absolutely spot on and smoke production is quite significant when you draw — but only a slight trickle when it’s resting. New notes have developed including some leather and very minor cocoa notes while the floral notes decline significantly while the spicy kick remains. For the second third, it’s much like the first: great draw, fairly even burn and great smoke production. The notes are mainly a mild leather, spiciness, and background floral notes, none of which are necessarily dominating the profile. Overall this is a very light cigar in body with what I’d say is a medium strength to it. While the cigar is not bad it might be just a tad boring with the final third continuing more of the same. The HR 500 doesn’t have an overly complex profile, but is consistent and enjoyable. Finishing out the cigar there aren’t any harsh or bitter notes and it smoked nicely down to the nub. Rocky Patel cigars have always seemed to find a place in my humidor even if not in large quantities. My main issue with them is that they’re not complex and usually very one dimensional. The HR 500 is much the same, but to me, they did not “hit one out of the park” with this cigar. It had a few nice notes and good overall construction so I can’t really complain too much, however, it just wasn’t something that caught my attention and made me want more. Unfortunately, the HR 500 has a much higher MSRP than many of the other Rocky Patel lines making it something that I would not buy again since I can get virtually the same profiles with some of their less inexpensive lines. I can’t tell you to go buy a box of these, even with how awesome the humidor looks, but I can say if you like Rocky Patel cigars this would be one to at least put on your list to try once.