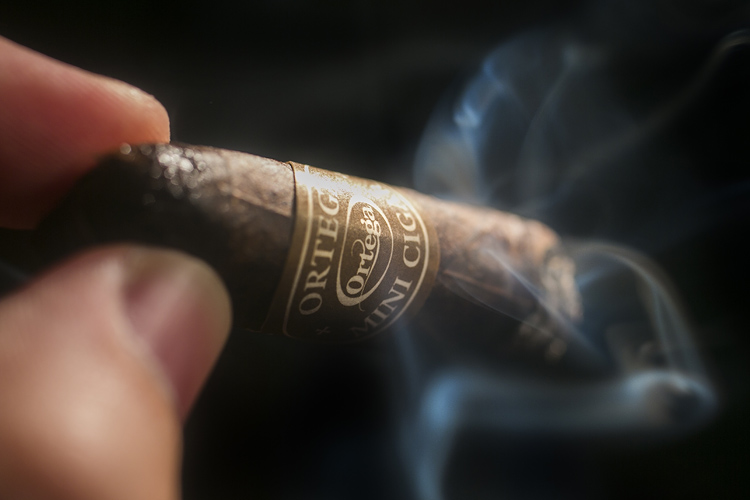 The question everyone asks when at the annual IPCPR trade show and convention, “what’s your favorite thing so far?” It happens in a variety of forms, none more so comical than with the Ortega Mini Maduro. As people began talking about the cigar, which was postponed from a planned June release, many described the cigar was good, all with one caveat, Eddie Ortega still wasn’t entirely satisfied with the blend.

We posted the press release regarding the Ortega Minis a few months ago:

June 4, 2013 (Sunrise, Fla.) – Ortega Premium Cigars officially announced today the June release of their new Mini Cigar line. Unlike their current flagship lines the Serie D, Cubao and the limited release Wild Bunch Series which are all made in Nicaragua, the new Mini’s will be made in the Dominican Republic by Abe Flores at the PDR factory in Santiago.
According to Eddie Ortega, “My inspiration for making the Mini’s was the lack of a nice and short smoke in my portfolio, I’m always running around and too often find myself having to relight bigger smokes I’ve left sitting in the ashtray and have gone out, I hate relighting good cigars. A 15 to 20 minute smoke is just perfect for a short drive or a small break at home on the patio.”
In what is probably a first or one of the very few in the cigar industry, Ortega has also decided to break away from the standard boxes and use a slimmed down crushproof Flip Top box that makes them very easy to carry and stow away in the average shirt or pants pockets.

According to Ortega the tobaccos are Ecuadorian Connecticut for the Natural, Honduran Habano for the Full Bodied (Habano) and Brazilian Cubra for the Maduro. The filler is a mixture of Dominican and Nicaraguan tobacco. As is mentioned above, these are made at Abe Flores’ PDR Cigars factory in the Dominican Republic instead of My Father Cigars S.A., which is responsible for Ortega’s other lines. Ortega told halfwheel the cigars will begin shipping this week.

The cigars are sold in four-packs, which are displayed in sleeves of five, all looking rather reminiscent to cigarette packaging. Here’s what the cigars look like: 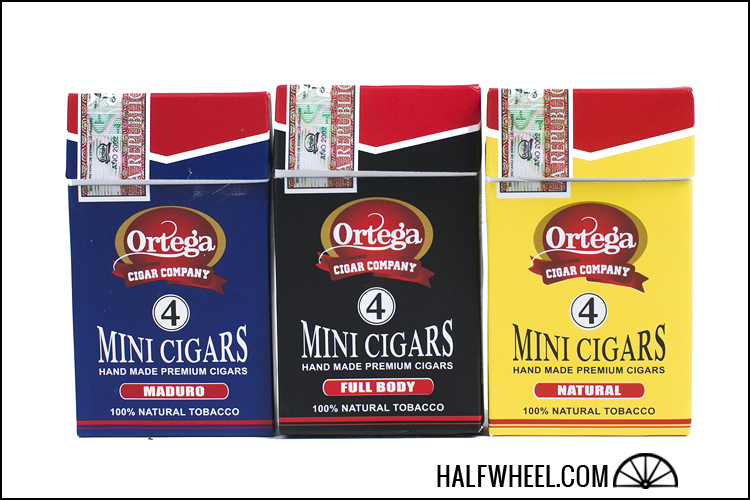 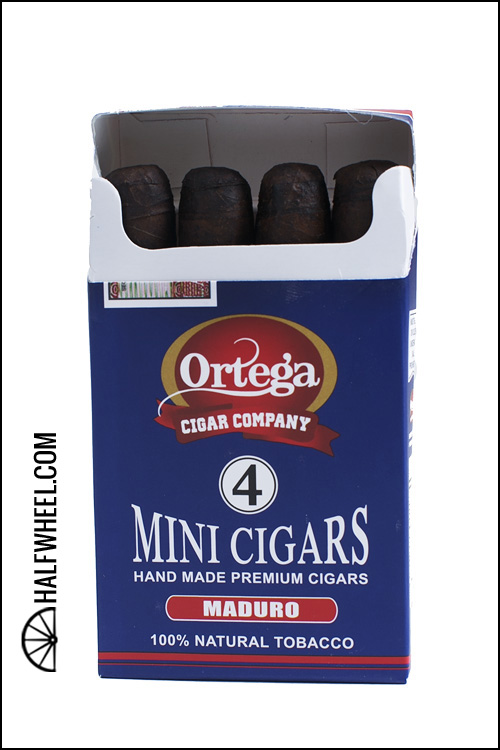 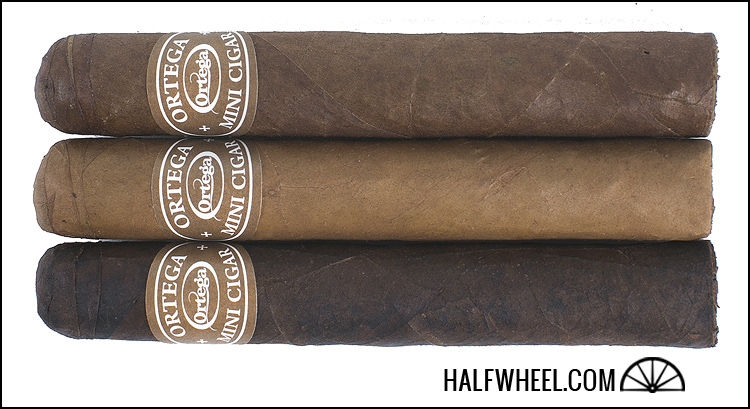 The cigars are small and while the packaging of the boxes is colorful, the bands are anything but. I hope the bands on my cigars were preproduction, as they definitely could use some tweaking to get the quality up to par just in terms of printing. As for the cigar itself, it’s got some veins on the Brazilian wrapper, but nothing too concerning. It’s amazing what one inch and 12 ring gauge will do as this definitely looks “mini” compared to the modern-sized Robusto, but I have no doubt I’ll be able to get 20 minutes out of it. Generally, the cold draw delivered a mixture of cocoa and cedar with some pepper, all detailed, but entirely straight forward. On one occasion, the cigar tasted like salmon, I got no clue where it came from, but it was a definitive salmon note.

As for the beginning of the first third, the Ortega Minis started much the same. Smooth cocoa and cedar dominates with just a touch of pepper on the finish. It’s hearty, but smooth—all and all a good start. With some note that thirds might be overkill, the first ten minutes goes much like this with some saltiness joining the profile, but it otherwise staying the same. There’s a few touch-ups needed right near that first third mark, but the ash is at the very least holding well and I have no other issues with construction. By the second third—15 minutes in—the pepper has fully moved to the back of the throat and the cocoa has largely disappeared. There’s still quite a bit of sweetness, but it’s not attached to the chocolate note as it was so prominently through the first third. Cedar isn’t a totally unique flavor as far as cigars go, but this level of detail to the cedar note I don’t get everyday and it’s particularly not reminiscent of the classic Dominican woodsiness that I remember. Smoke production is great, draw is easy and the burn is fine. In fact, if you slow down, the Ortega Mini Maduro does well, allowing me to take as much as two minutes in between puffs without going out. 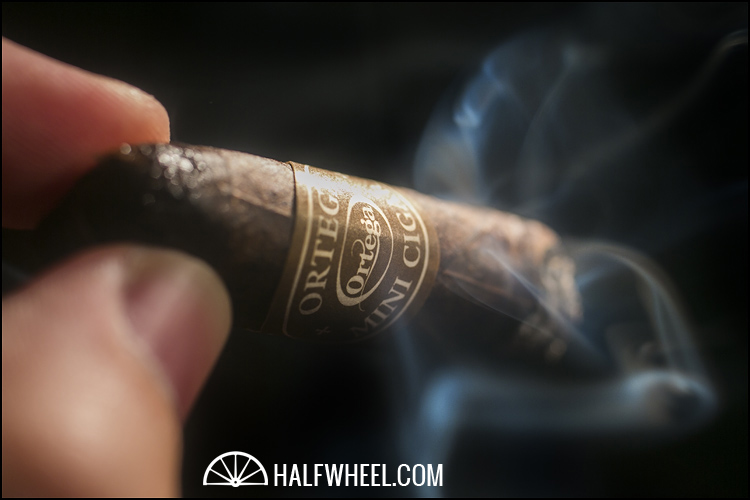 After 20 minutes there’s an uptick in creaminess, but the pepper is beginning to dominate. Unfortunately, it is also increased by a growing level of harshness as the cigar gets warm. The grassy finish that had been prevalent through the first 25 minutes is gone. At around the 30 minute mark, the cigar gets entirely too warm to smoke and I am forced to end it, probably seven minutes past where I should have stopped. 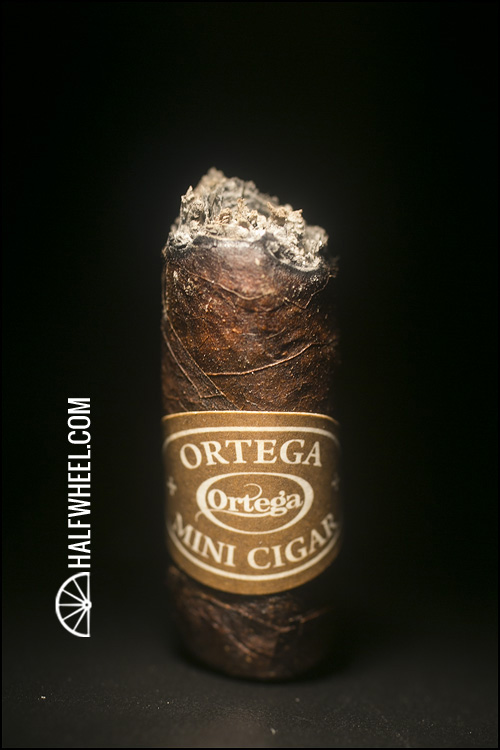 For those wondering, I smoked all three of the Ortega Minis. I definitely liked the Maduro more than the other two with the Full Body (Habano) being my least favorite. This was not the most complex cigar Ortega has released, but the Mini Maduro has developed and mature flavors, solid construction and a really easy format to enjoy the cigars. There are a lot of small cigars on the market that I won't smoke, this isn't one of them. Credit where credit is due, Eddie Ortega's greatest success since going out on his own hasn't been Wild Bunch, it's been putting out good cigars at great price point, this keeps that trend going.