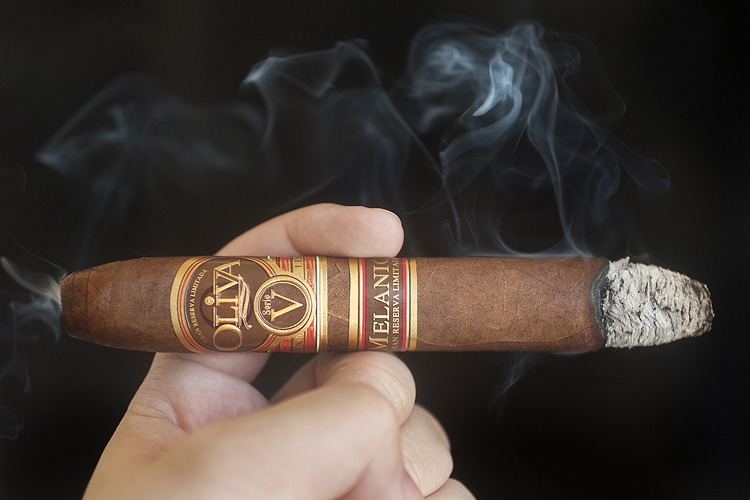 The last time a new Oliva line was introduced it was 2007 at the Houston RTDA, now five years later the Oliva Serie V Reserva Melanio is set to debut at IPCPR 2012. It’s a cigar that has been in the work for years, something we fully chronicled a few weeks ago after the cigar was announced:

At the 2010 IPCPR, Stogie Guys posted this brief bit of info: Also rumored is that a limited but regular production cigar named “Melanio” (after Gilberto Oliva’s grandfather) is in the works with an estimated MSRP of $12-15 per cigar.

Throughout last year, Oliva continued working on the cigar, although all indications heading into 2012 were that the Oliva Master Blends 4 was taking priority. Things changed this past weekend when Erik Calviño of Cigar Snob posted the following picture of the Serie V Melanio: 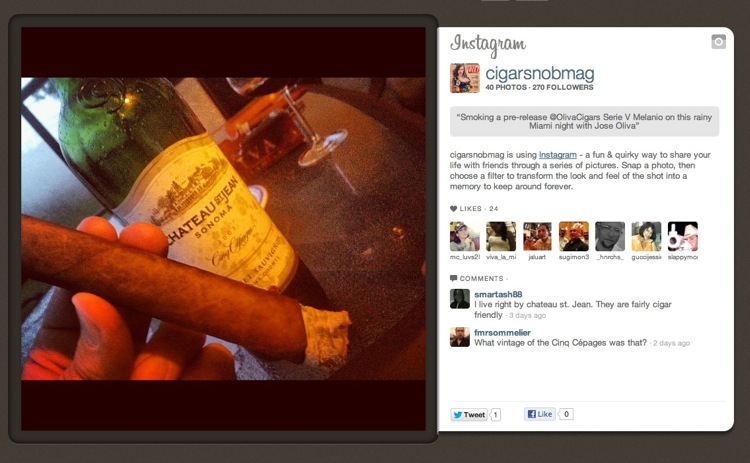 Word from Oliva at the time was that the cigar was planned for IPCPR with five sizes, although the sizes weren’t confirmed. That changed Tuesday when Savona posted the following details: The final blend came from combining Ecuadoran Sumatra seed wrapper with a Nicaraguan blend that emphasized tobacco from the Jalapa region, the area of Nicaragua known for more nuanced leaf than Estelí and Condega. As with the original Serie V line, these are well-aged tobaccos. “The fillers that we use for [Serie V] are our most-aged fillers,” said Oliva. “This used a little more Jalapa. Jalapa adds flavor, but it doesn’t have a lot of body.”The new cigar brand will come in five sizes: Robusto, Churchill, Torpedo, Petit Corona and Figurado, a smoke Oliva described as a “double-ended torpedo, straight in the center.”The cigars will retail for $8 to $14 per cigar, making them the most expensive in the Oliva portfolio.

The cigar is a tribute to the man who the Oliva family traces their tobacco roots. The Oliva website explains the history briefly:

The Oliva Serie V Melanio will debut in five box-pressed sizes, all in boxes of ten: 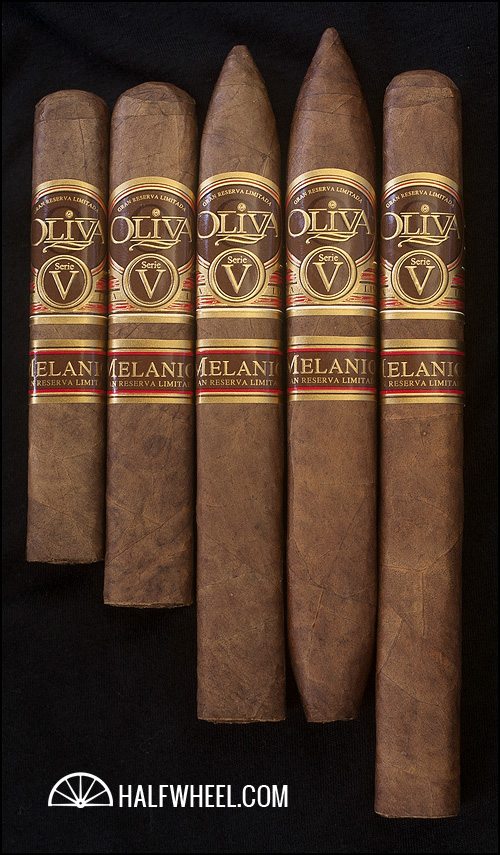 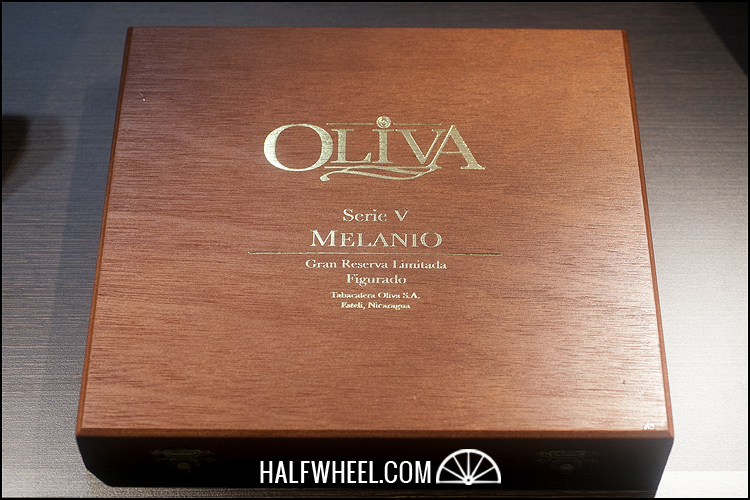 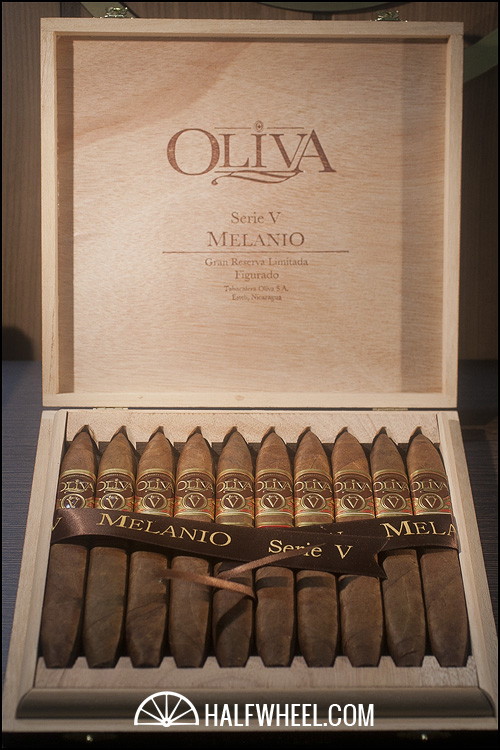 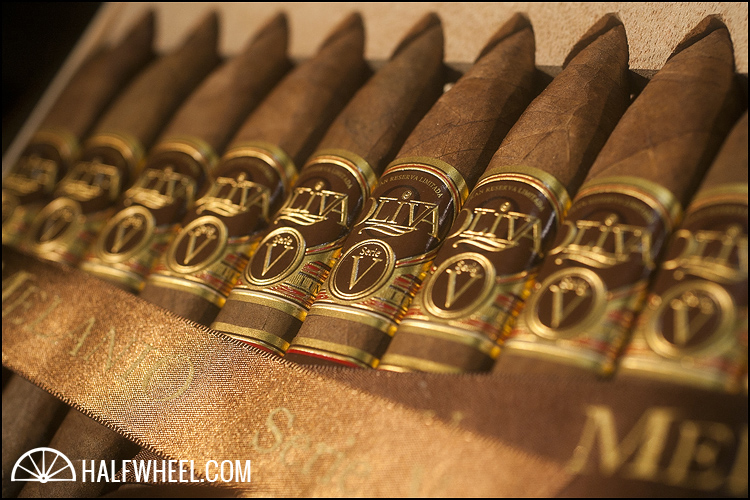 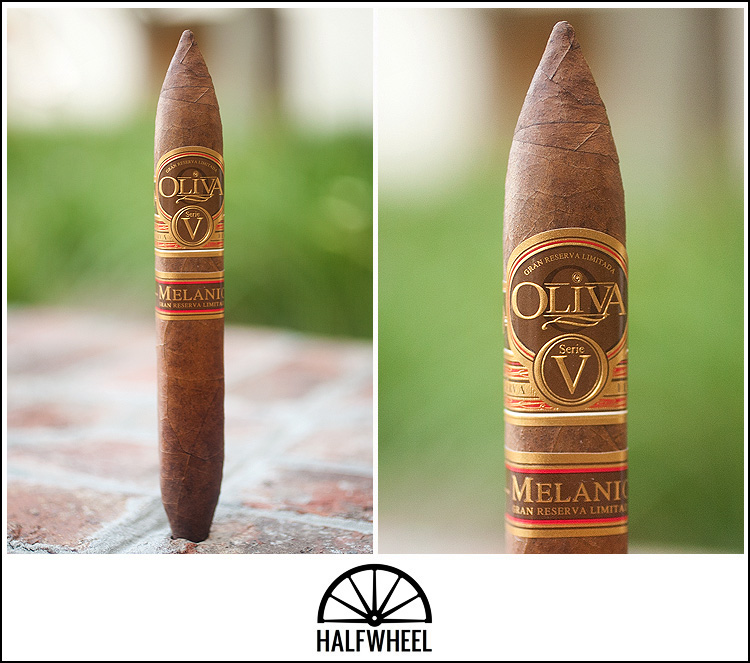 The shape itself is reminiscent of a Viaje Double Edge Sword, although uniquely box-pressed. It’s more of a rectangular press, much more pronounced and easier to notice in the parejo sizes, which look like candy bars. A large reason for the appearance comes to the dark Ecuadorian Sumatra wrapper, which is akin to the wrapper on the normal Serie V. It’s got a few visibly noticeable veins, but most of the wrapper is spotless and incredibly smooth to the touch. Aroma coming from the Figurado is a heavy sweetness with some leather. The foot is a bit more complex with produces less aroma in terms of intensity, but more flavors—sweet cocoa, leather, touches of pepper and hints of root beer. Cold draw is sweet cocoa with a compliment red pepper and a touch of herbs. Great detail and a flavor that is right up Brooks’ alley—sweet and spicy.

It starts the first third incredibly delicate, but medium, with a sweet and salty nuttiness and a touch of pepper in the back. It’s an amazing contrast and greatly detailed. A few puffs in and the pepper is now fully formed in the back of the throat. Eventually, the Melanio settles to a sweet and short cocoa with an easy saltiness and a great pepper in the back. The cold draw produces some bread notes, almost totally absorbed by the darker up front notes, and a toasty finish. While the smoke production is great, I wish the draw was a bit tighter. 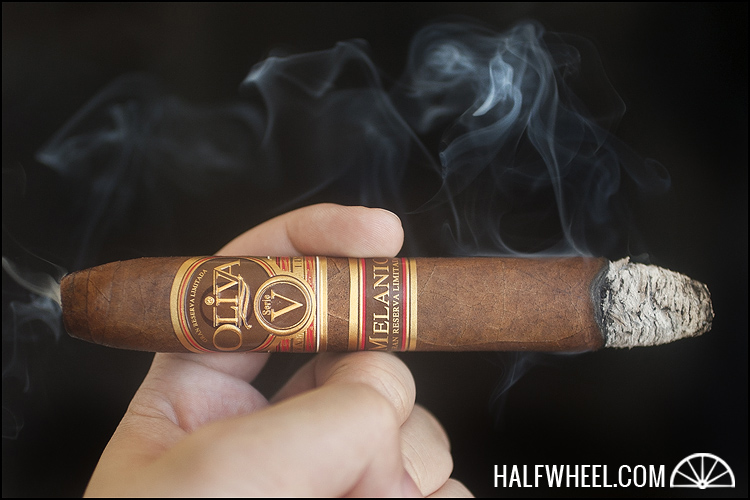 Into the second third and a distinct peanut note is developing in the Oliva. It’s largely due to the incredible saltiness, which is in my opinion, easily the signature note of the cigar, although not the heaviest by any means. There’s some creaminess that makes it in as well as some earthiness, but the core is largely the same with an amped up pepper. While you can tell there is some strength in the first third, it’s mainly medium-full in the beginning. As of the second third, it’s into the fully category, although it’s got the same sort of blind strength the Serie V often shows. 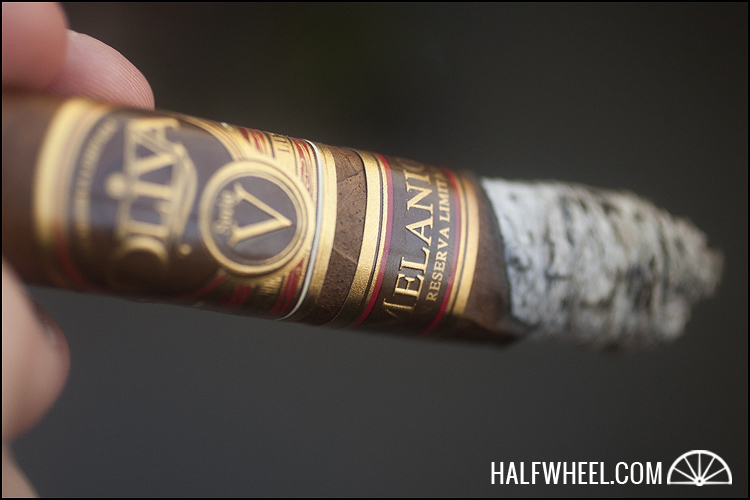 The final third presents a few moments where the burn line needs some touching-up, something that begins towards the latter half of the second third. Flavor-wise, a more generic nuttiness and earth takeover with the grassiness from the cold draw and a bit of barnyard. Overall, it’s still got the smooth, but dark, signature the Serie V posses. Smoke production is also declining as the draw opens up, but the cigar makes it to the inch mark before presenting any formal burn problems. 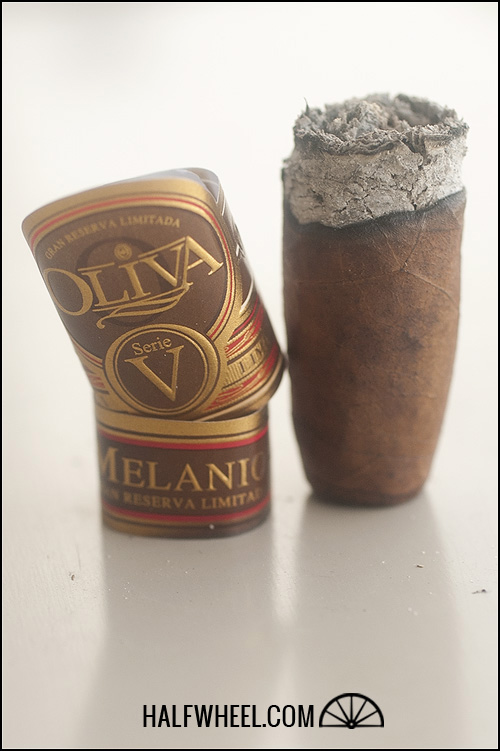 Your first question is, really, $14 for an Oliva? That's largely something brought on by Oliva's prices, which are rather low, as evidenced by the sub-$6.00 Cain F Lancero, in tubos, last year. The question you mainly care about is, is this better than the regular Serie V? Yes. They are truly two different cigars with some shared traits, but this is slightly less sweet and significantly more nuanced with a lot of flavors you don't find in a cigar, particularly in this quantity. For the Oliva faithful, this is your celebration cigar and easily the best regular production cigar their band is on—it's that simple.