In 2002, Litto Gomez released the first Limitado cigar, a 6 1/2 x 54 Toro that used an Ecuadorian Sumatra wrapper over Dominican filler and binder.  Roughly every two years since, a new Limitado has been introduced, and the newest version the Limitado V was introduced at the IPCPR show in Orlando, Florida last week.

According to La Flor, the blend for this specific release is based off of the original Limitado blend, and includes an Ecuadorian Sumatra wrapper, a Nicaraguan binder and Dominican fillers. Only 2,000 boxes of 48 will be produced.

There have been five different releases in the Limitado series. They are: The La Flor Dominicana Limitado V is an impressive looking cigar with a dark reddish brown wrapper that while almost devoid of oil, is smooth to the touch. The cigar has just the right amount of give when squeezed, and seems perfectly rolled. The Ecuadorian wrapper smells strongly of hay, dark chocolate, coffee and a bit of pepper.

The Limitado V starts off with a fairly sweet profile, along with flavors of leather, cedar, milk chocolate and earth. There is very little pepper or spice in both the mouth and retrohale, but both seem to increase in strength as the first third continues. Construction is wonderful so far—both burn and draw are spot on for the entire third.  Smoke production is excellent as well, white, dense and billowy. Strength starts out surprisingly mild, but immediately gets stronger and ends the first third at a solid medium. 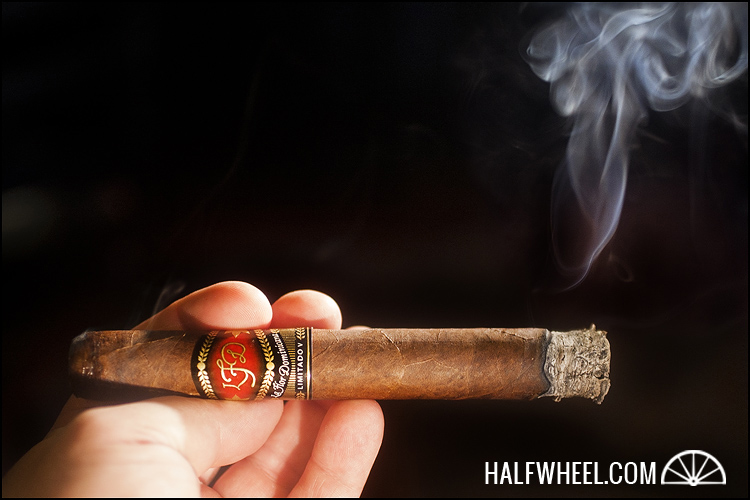 Coming into the second third of the Limitado V and as expected, the strength is increasing by leaps and bounds. The profile overall is extremely rich and still quite sweet on the palate, but I can tell it is starting to fade a bit. Flavors stay in the same wheelhouse as the first third: earth, leather, espresso, and sweet milk chocolate. I am noticing some floral note, but it does come and go and is just never overly strong. The draw remains excellent, and the burn line is perfect for the second third. Strength bumps up to a very strong medium, just under full and getting stronger. The final third of the LFD sees the sweetness die down quite a bit, but the note is still very prevalent in the background. The flavors that are present are have not necessarily changed, but different notes have gotten stronger. For example, the earthiness has faded a bit, but the dark chocolate/espresso notes have really taken over the profile, and continues that way until the end of the cigar. Overall strength hits the full mark right after the start of the final third, and continues that trend, finishing easily at a strong full mark. Construction remains wonderful with both burn and draw impressing me, and the cigar is easy to smoke down to the end. The Bottom Line: While I have smoked quite a few LFDs in my time, I usually gravitate towards the Small Batch and Cameroon Cabinet series. The persistent sweetness in the blend surprised me, as did the fact that the strength did not really get going until about the halfway point of the cigar. The blend of the Limitado V is not the most complex, but the richness of the flavors and the full body was extremely satisfying. Construction was excellent for the entire smoke and the smoke production was impressive, even considering the larger ring gauge. An overall extremely good cigar, well worth the price that is charged for it, and a definite winner for Litto.