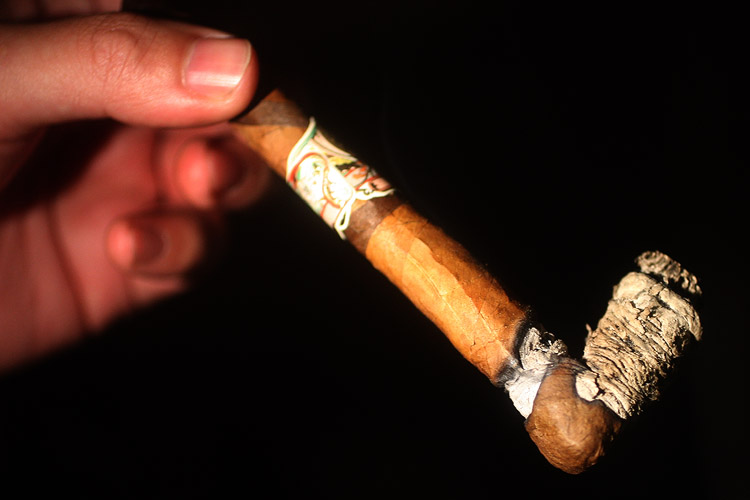 At the 2010 IPCPR show in New Orleans, there were two special cigars in the My Father booth: the My Father Limited Edition 2010 and the My Father Baseball Bats. Turns out, both would ship to retailers in limited quantities later at different points later in the year, the latter being a surprise to many.

Alongside the Baseball Bats that shipped just before Christmas were cigars that were rolled in the shape of a pipe, or a saxophone to some, something that Pepín has been rolling for years. To my knowledge, this was the first time that they were offered for sale. At the time, very little was known about these cigars. 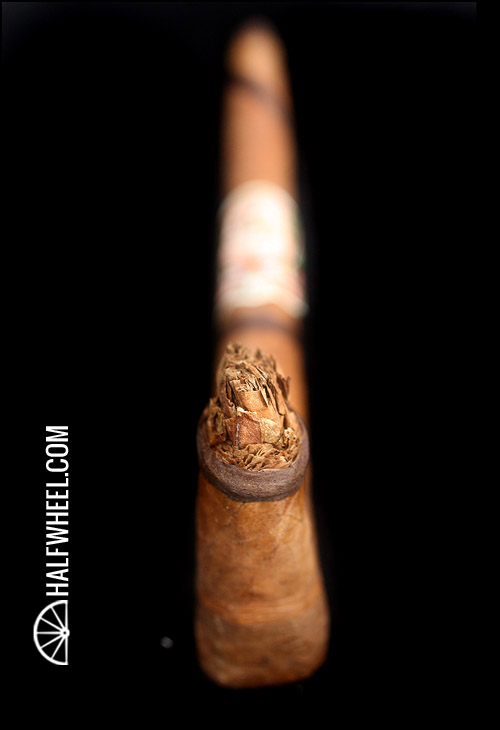 Last year while shooting Janny García’s Icons of Cigars™ portrait, we asked her about these cigars. She gave us a bit of info. First, there is no actual blend and it’s unknown what tobacco was used. This means that each Baseball Bat or Pipe could contain entirely different tobacco than every other one made. In addition, these are said to be rolled by one of two people: José “Pepín” García or Jaime García’s wife, Dany, who is also a highly skilled roller. 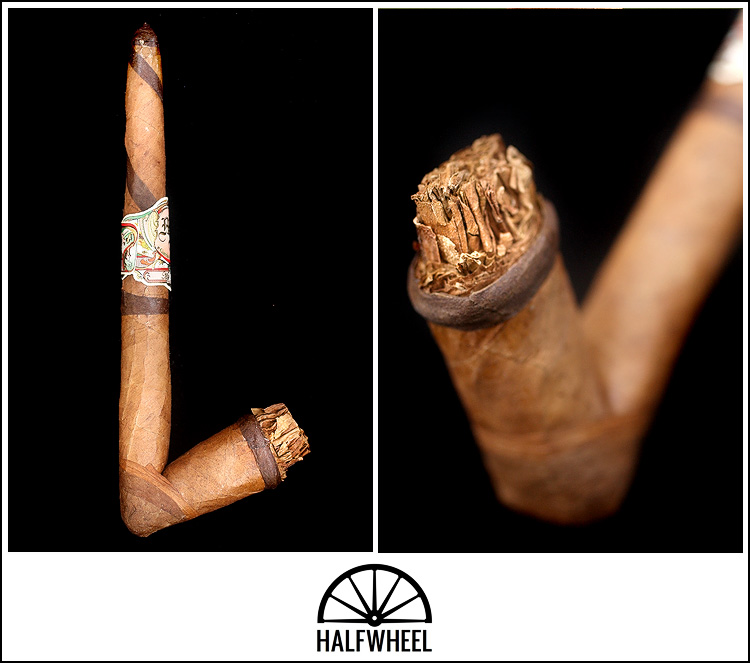 I don’t really understand those that say saxophone. There’s a bunch of tobacco coming out of the bowl, identical to a pipe, but I digress. Like the My Father Baseball Bat there are two different shades of tobacco on the outside, a lighter shade that makes up the majority of the cigar and darker tobacco that is used more as accenting. At the head the cigar is tiny and actually closed off with a sharp torpedo cap, really reminiscent of a pencil. It gets progressively thicker, widening out at the top of the bowl. There’s a pretty sharp angle for the bowl and as you can see there is actually pieces of tobacco at both end of the bowl to help keep the bowl in place. The aroma off of the foot of the My Father Pipe is unbelievably strong: it reeks of ammonia, which is a bit odd given that these are over a year old. Depending on the angle, there’s a bit of a woodsiness. Cold draw is a bit tight, which makes sense with a decent plum, touch of coffee and a bit sour.

As expected, it takes a bit of time to get the first third of the Pipe going. It starts with a really simple cedar nut note; one dimensional, but not bad. Despite the cold draw and the unique shape, the draw is actually wonderful and the smoke production is a joy to watch. For me, the first third is burning through the bowl, which produces a nutty and earth mixture with touches of cedar. After about fifteen minutes, a harshness begins to emerge, but it’s not a problem, yet. 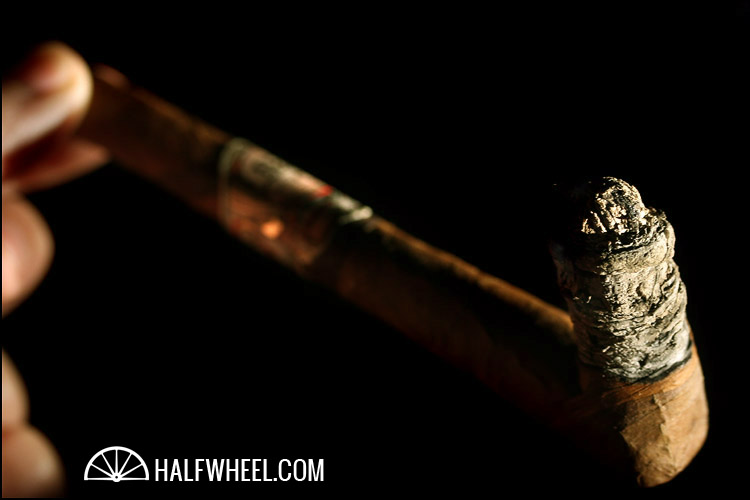 The second third for me is burning the angle of the bowl. There’s no easy way to define third, but I end up doing it based off of the different stages of burn rate. The flavor is bland: earth and harsh, definitely getting harsher. That’s not really what I’m paying attention to. As you can see above, the ash holds all the way through the bowl and burns around the bend, leaving just two pieces of the tobacco that was wrapped around to hold the angle unburned. It’s unbelievable, yet from what I’ve seen of the few pictures that exist of people smoking pipes, this concept of holding through the turn seems quite common. Draw is still excellent and the smoke production is picking up. 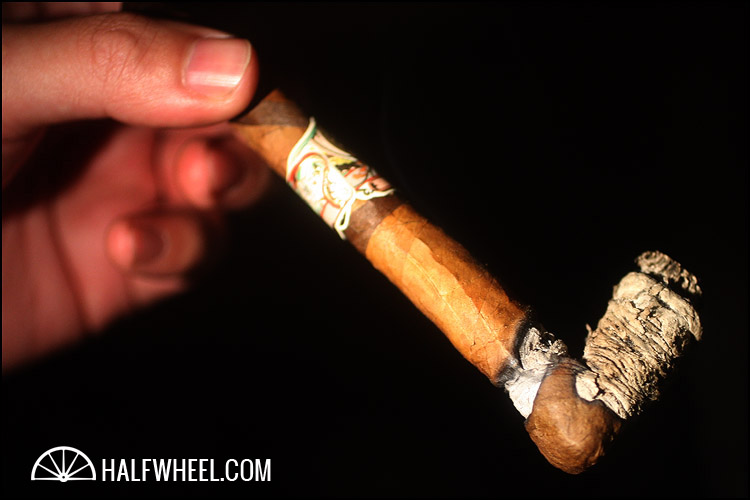 There’s a lingering question going into the final third: why am I still smoking? The flavor is not getting any better and turning what was once a very plain cigar into something disgusting. At this point, it’s not just the flavor. The width of what’s left of the My Father Pipe is just too narrow and despite my best efforts, the cigar just goes out. I should mention the draw is borderline pain-inducing pretty soon after the bend ends. At this point, I determine that there simply is no reason for me to attempt a continuation. 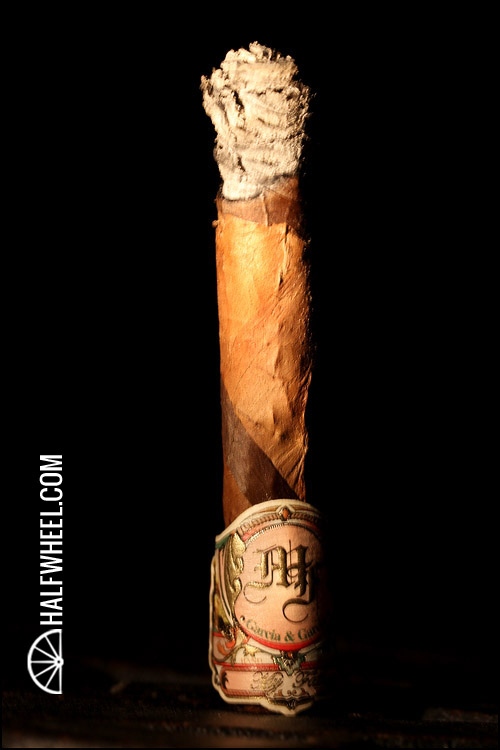 Anytime you have to publish an editorial justifying a review, it's not a good sign. There is however a somewhat strong argument that these cigars shouldn't be reviewed. First, as is mentioned numerous times above, no one really knows what the blend of this particular cigar is, but we do know that other My Father Pipes are probably not the same blend. That means this score is truly unique to this single cigar, which questions whether or not this review could be at all helpful. Secondly, there's an argument that says it's pretty clear that this and the My Father Baseball Bat were never meant to be smoked. There's truth to both arguments, in my opinion much more for the former than the latter. While we can have the discussion of whether you should race vintage Ferraris, I think this site's position has been made time and time again:  cigars are made to be smoked. And while some will say that these were truly made as art pieces, I don't see how that precludes them from being smoked. Unlike say the OpusX Football or the Gran Habano Corojo No.5 Gigante these were to consumers throughout the country. This was not a giveaway, event, charity or marketing piece; this was a cigar that was sold no different than any other cigar. There was no warning label, no disclaimer — nothing that would indicate that you shouldn't smoke the cigar. So I did. Construction-wise, it's the most interesting cigar I've seen burn, which it did quite flawlessly, and while I did have to set it down two inches early, it wasn't unexpected as the cigar was barely thicker than a pencil when I stopped. Flavor-wise, it started out okay and didn't really become a problem until the bend. That was my experience, and given the aforementioned uniqueness of it, these reviews were published today. I still firmly believe that cigars are made to be smoked, but if I had to pick one to display as a museum-piece in my humidor, the My Father Pipe is no doubt the one.