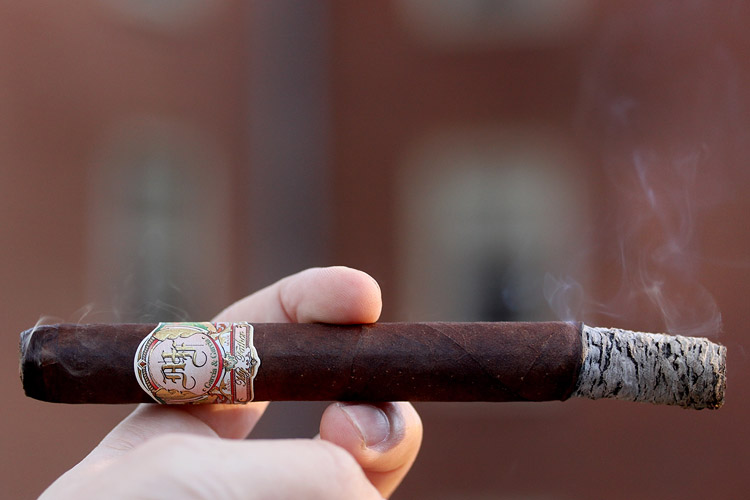 Like last year’s Tatuaje 109, Rick Gadway had two cigars made for Federal Cigar’s 91st anniversary, one in Ecuadorian Connecticut and one in a Connecticut Broadleaf. The former, like the Tatuaje 109 Reserva, was only offered to local customers; the latter, like the 109 Rosado, is being sold to the general public.

We broke the news on the special Cervantes release from My Father Cigars S.A. a few weeks ago. With the flood of Broadleaf wrappers coming out of Jaime García’s factory, sometimes you forget how stunning they can really be. This is a great example of how luscious Broadleaf can be. It’s toothy, dark, oily and just plain good. The cigar photographed has a noticeable patching job, nothing concerning, although a bit out of the ordinary for My Father Cigars S.A., and a bit obvious. Aroma-wise, the My Father Le Bijou 1922 Cervantes has a great sweet leather, muted cocoa, bit of earth and some cedar. The foot is much like the Ecuadorian Connecticut rendition: cherries, leather, sweet brownie and earth. Oddly, the cold draw of the Cervantes is rather reminiscent of the foot: the brownie cocoa is up front, little bit of pepper, cherry and earth. It tastes like some of the older Pepín classics that came from Tabacalera Cubana S.A. The major changes from the foot draw are a bit of red wine and a touch of sour. Lighting takes a bit, but eventually the dark aroma fills the air.

The first third of the Le Bijou 1922 Cervantes starts with a profound cocoa note that is quickly taken over by an earthy Broadleaf flavor. Deep nuts bitter through the finish with an added chewiness and a rising black pepper that starts at the middle of the tongue and earth. It settles to be very chewy Maduro profile with earth, aged tobacco, cedar and a dominant black pepper on the tongue and throat. Unlike the Connecticut version, the Maduro version really starts from the beginning, as opposed to taking a few minutes to get going flavor, strength and smoke production wise. For the second third, the Le Bijou 1922 Cervantes gets much earthier. The pepper is still in the back, but the flavor profile itself becomes much smoother and molds together. On the finish, the Maduro version of the Federal 91st adds nuts and floral notes with a bit of dark cocoa coming to the retrohale. Strength is still full, which isn’t much different from the first third. The final third of the Federal 91st features dark cocoa, a Maduro sweetness and earth. As for the black pepper, it’s relatively gone. Strength of the Cervantes is still full. With and an inch and a half left, the cigar begins to show its youth and the flavor profile begins its collapse. It never gets harsh or uniquely young, but the whirlwind of flavors is definitely not a signature feature of the first five inches. At this point, I like the Connecticut version better, but only slightly. The Federal 91st Maduro is a good cigar, but it needs time. I think a month will help to get more of the flavor out, as right now after about two inches it seems the flavor really begins to morph together. If your complaint has been that with limited exception (Tatuaje T110, Viaje Zombie, etc.) single store releases haven't been strong enough, go ahead and pick up a box. In addition to the Maduro flavors, this is easily the strongest My Father banded cigar I've smoked and I'd make the case that this is stronger than the Jaime Garcia Reserva Especial. The Federal 91st Cervantes really does remind me of an amped up version of some of the older Pepín blends, the major difference being the complexity is really restrained right now, while the strength is multiple times higher. The real bottom line is I bought a box.