After a few delays, Epicurean Cigars newest blend will be shipping to retailers this week. The Carnavale was first announced back in January, and had its release date pushed back from June to August to September due to problems with the boxes being produced and to ensure proper aging. During that time, the total production also doubled, from an original 500 boxes of 20 for each size to 1,000 boxes for all four vitolas annually.

The blend is produced at the Plasencia Cigars S.A. factory in Estelí, Nicaragua and features a Colorado habano oscuro wrapper grown in Jalapa, Nicaragua. The binders are American broadleaf and Honduran tobacco while the  three ligero fillers include tobaccos from the Jalapa region as well as ASP Estelí ligero. Originally, the cigar was named Carnival, but was changed to Carnavale due to the CAO Brazilia with the same name.

There will be four different vitolas when the Epicurean Carnavale launches this week. The Epicurean Carnavale is small when held in your hand with an extreme box-press and a dark mocha brown wrapper that is almost totally seamless. While the cigar does feels quite a bit like parchment, it has quite a bit of give to it when squeezed. Aroma from the wrapper is a combination of sweet raisins, cereal, sweet oak and pepper, while the cold draw brings flavors of strong raisins, oak and cinnamon.

Starting out, the Epicurean Carnavale has a dark cocoa flavor that is dominant right off the bat, along with secondary notes of cedar, barnyard, earth and grass that rise and fall in strength throughout the first third. I am tasting some fairly significant raisin sweetness, but it is mostly relegated to the finish. While there is no spice to be had, I am noticing a pretty significant black pepper on the retrohale. The burn is fine so far and the draw is excellent, while the smoke production is about average. Strength-wise, the Carnavale ends the first third well below the medium mark, but seems to be getting stronger, albeit not very quickly. 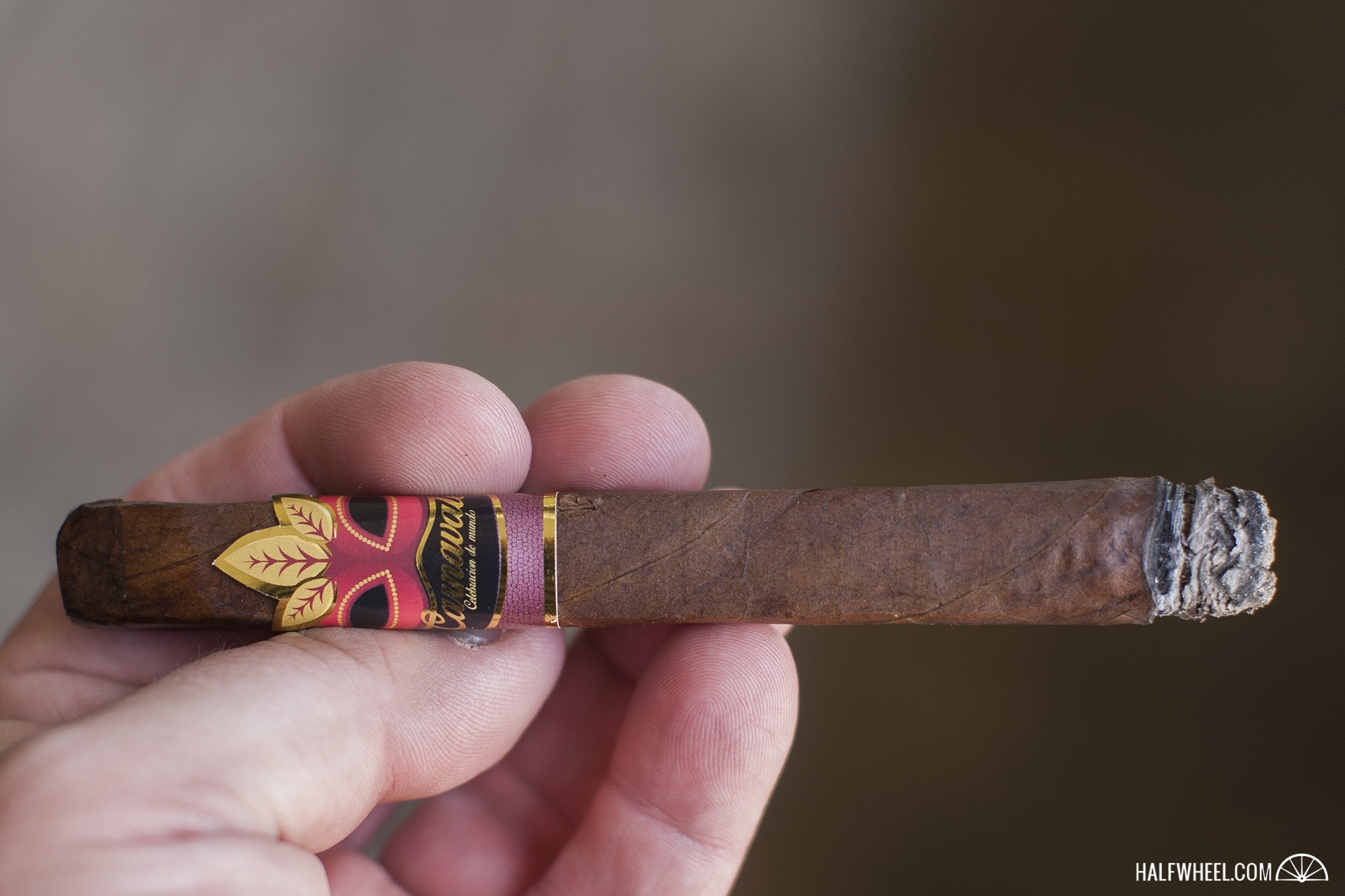 The dark cocoa note is still dominant throughout the second third of the Epicurean Carnaval, but a nice slightly bitter espresso note is gaining steam, especially on the finish and the retrohale. I am still tasting other flavors of wood, grass and creamy leather. The black pepper on the retrohale has remained constant, but unfortunately the sweetness has turned from the raisin note in the first third to more of a generic sweetness that I am picking up only every once in a while. Construction-wise, both the burn and draw tow the line, while the strength is very close to the medium mark by the end of the second third. The final third of the Epicurean Carnavale features more of the dark cocoa note mixed with an ever increasing espresso flavor, along with a bit more sweetness than was present in the second third. Other flavors of clove, dry tea leaves, leather and grass flit in and out, but none are strong enough to really make much of a difference in the overall profile. The burn and draw continue to give me no issues whatsoever, while the strength finally hits the medium mark by the time I put the nub down with a little less than an inch left to go. Although there is not an overt amount of complexity in the flavors in the Epicurean Carnavale, the flavors that are present work well with each other and the construction overall makes it a very easy cigar to smoke. I loved the box press and the size, and I think this blend will resonate with people looking for a strong dark chocolate profile mixed with espresso notes. An easy cigar to recommend trying at least once.