Rocky Patel has a reputation for releasing a number of new cigars every year, and the offerings at this year’s IPCPR trade show and convention were no exception. As you saw in our recap, the company showed off six new cigars:

The Bold by Nish Patel isn’t the first foray into the cigar world for Rocky’s younger brother. At the 2011 IPCPR Convention and Trade Show, the company released the Zen by Nish Patel, a Connecticut-wrapped cigar that quickly had its name changed to Xen by Nish Patel in August 2011.

Bold by Nish Patel is being released in four sizes, all of which come in 21–count boxes:

From the press release announcing the Bold by Nish Patel:

Nish Patel’s latest release lives up to his name with well-rounded strength and complexity. Bold by Nish Patel teases the palate with a punch of white pepper and cocoa before transitioning into a hearty profile of sweet spice and roasted coffee.

It transcends a flavor profile of what I like to smoke. I have been working on Bold for the last five years and am really excited to share this great blend with everyone. This cigar has aged broadleaf wrapper with fillers from our farms in Jalapa and other aged tobaccos from Estelí. I am also using two binders on Bold, one from San Andrés and the other from Connecticut. I have one word for this: “wow.”

The finished cigars will look like this, according to pictures released by the company: 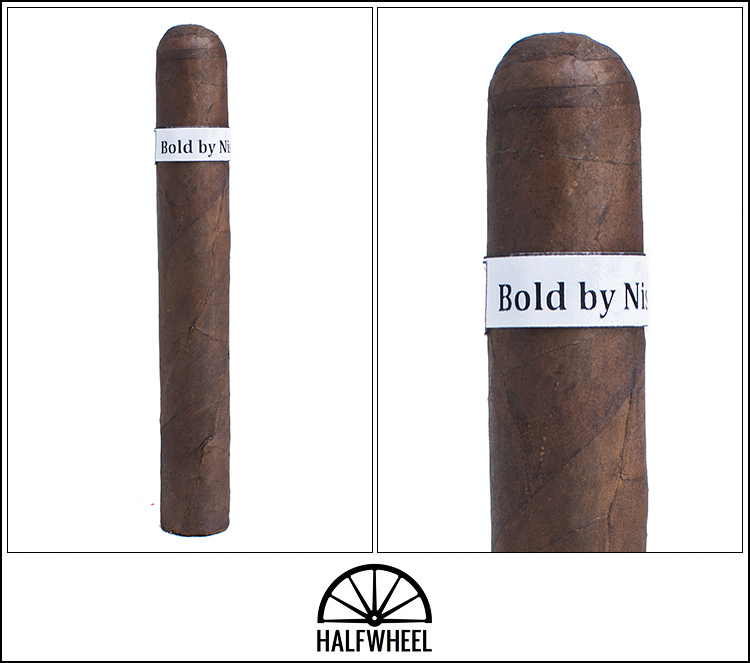 *The Bold by Nish Patel is being launched at R&R Cigars in Tuscaloosa, Ala on August 23. The cigar is scheduled to arrive at other retailers in October.

The Bold by Nish Patel has a smooth glistening dark brown wrapper with black veins and spots of texture. The cap has a few ridges on it and isn’t laid as flat as it could be. The pre-light aroma is peppery with baking spices and a hard to place note that is somewhat sweet and saucy; describing it as a teriyaki or curry note would be a disservice to those dishes. The cold draw is a bit more savory though not as saucy or tangy – again, the flavor is difficult to place and something that seems to be geared toward a palate different than my own. I can’t help but think this is some kind of glaze that is going to end up on chicken or pork instead of a flavor offered by a cigar. It has a consistent amount of firmness from top to bottom and seems to be very well-rolled with just a bit of give when squeezed.

The first third of the Bold by Nish Patel has an up-front start, not necessarily a spice bomb but definitely showing a good amount of flavor, albeit a hard to place flavor. In the first few puffs of the first cigar, I can see smoke emanating from the seams of the cigar, which suggests it might not have been quite as well-rolled as I originally thought. There isn’t a ton of smoke coming from the cigar and the flavor is increasingly hard to place, with the pepper note increasing more in the eyes than on the tongue or in the nose. A slightly gravelly, earthy note comes along shortly after that and seems to be the Mexican San Andrés binder coming out giving a definitive edge to the flavor profile. Pepper continues to play a significant role, though again, this isn’t a pepper bomb and the strength doesn’t seem to quite match up with the amount of pepper I’m picking up. The light grey ash clings on for about half an inch or so before letting go, while the burn line is more or less even, though it does waver a bit in one cigar more than in the others. There is a meaty flavor that begins to emerge and carries the cigar into its second third, though any attempt to pin down the flavor notes is stymied by what seems to be a previously unexperienced preparation and spice combination. The flavor from the Bold by Nish Patel stays fairly steady and consistent heading into its second third; there isn’t any noticeable increase in strength or pepper and the overall profile stays medium-plus but in a different way than most cigars. Towards the midpoint it begins teetering on the edge of bitterness, as some sour notes start to come out. They back off just a touch heading toward the final third, though it seems like the needle could swing back at any moment. Again, the earthiness and notes of rough soil seem to indicate somewhat under-cured Mexican tobacco than what the Bold by Nish Patel is said to contain, and begins to push the cigar into a territory of unpleasant flavors. The chalkiness is distinct and clean and a bit of minerality seems to be lingering in the background, but in this case the whole just doesn’t seem greater than the sum of its parts. Given the roughness of the flavors that have developed, the final third isn’t terribly anticipated other than that it might bring about some respite, or it will soon bring an end to the cigar. What I can only describe as the flavor of scorched earth is just too bold for my liking and I almost hesitate to use the term bold here. The aroma that comes off the cigar remains the best part of its offerings, with notes of steak and leather filling the nose while it rests in the ashtray. A final harsh note finishes out the final inches of the Bold by Nish Patel, including some cough-inducing roughness that solidifies this cigar’s standing. The finishing strength is still medium at best and didn’t leave any residual feeling in my chest or gut. After smoking the first two cigars for this review, I was puzzled as to what to make of the Bold by Nish Patel. The flavors were just so different and so unfamiliar that I couldn't believe what I was smoking was the latest offering in Rocky Patel's extensive portfolio. While not all of the company's cigars are fantastic, at least you can fairly safely say that they are all palatable, while the Bold by Nish Patel simply wasn't. After waiting a few days to smoke the final cigar, I still found some of the same flavors but also a rough harshness in the second half that just made the cigar too unpleasant to recommend. Maybe there was something wrong with the samples, maybe the trade show took its toll on them; I don't know. I feel almost obligated to try another one once they hit retail to compare notes because I was just so puzzled by this cigar. For now, the Bold by Nish Patel lives up its billing as bold, but not in a way I would recommend.