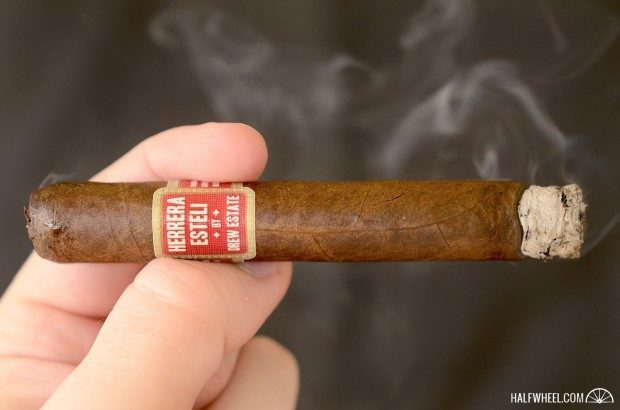 At the 2014 IPCPR convention and trade show we got some interesting news from Drew Estate and Willy Herrera, the Herrera Esteli brand would be coming out with some new stuff including store exclusives, though there were no specifics at the time. Just one month later the news arrived that the first store exclusive was going to Barrister Cigars in Union, N.J. which is also a Liga Privada Lounge.

In the press release, Herrera mentioned how this came about:

This was one of the blends that I was working on through 2012 and 2013; David smoked it at the Festival and kept coming back for more. Eventually, he smoked every cigar I had brought, which I thought would be enough for the entire week! I knew he loved the blend and it felt right assigning it to him for my first Tienda Exclusiva.

it uses a slightly modified version of the current Herrera Esteli band, inverting the color schemes. This marks the fourth different band Herrera has used. 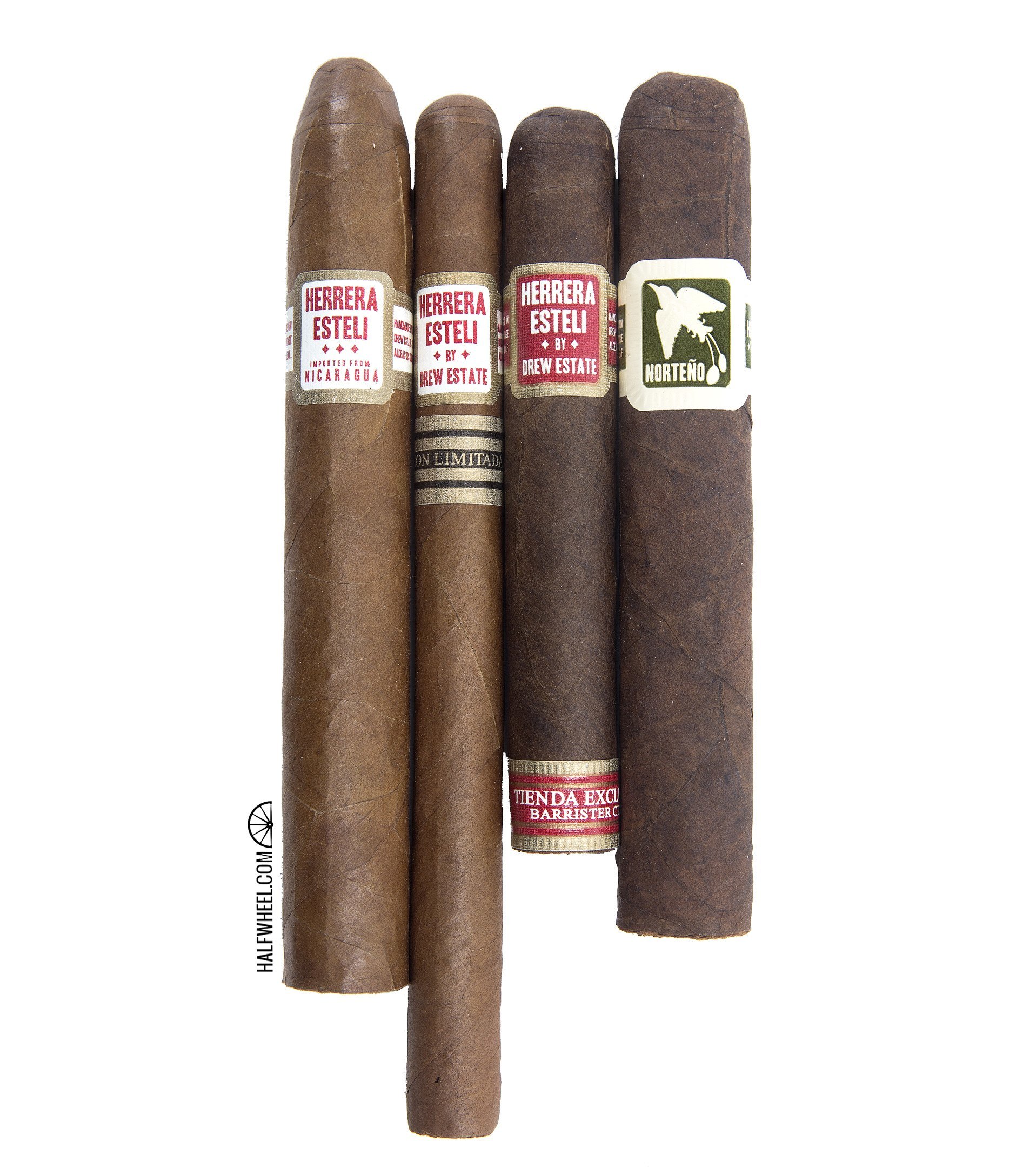 The Tienda Exclusiva is limited, although Drew Estate has not disclosed production numbers. It has said that it will not be produced past this year. 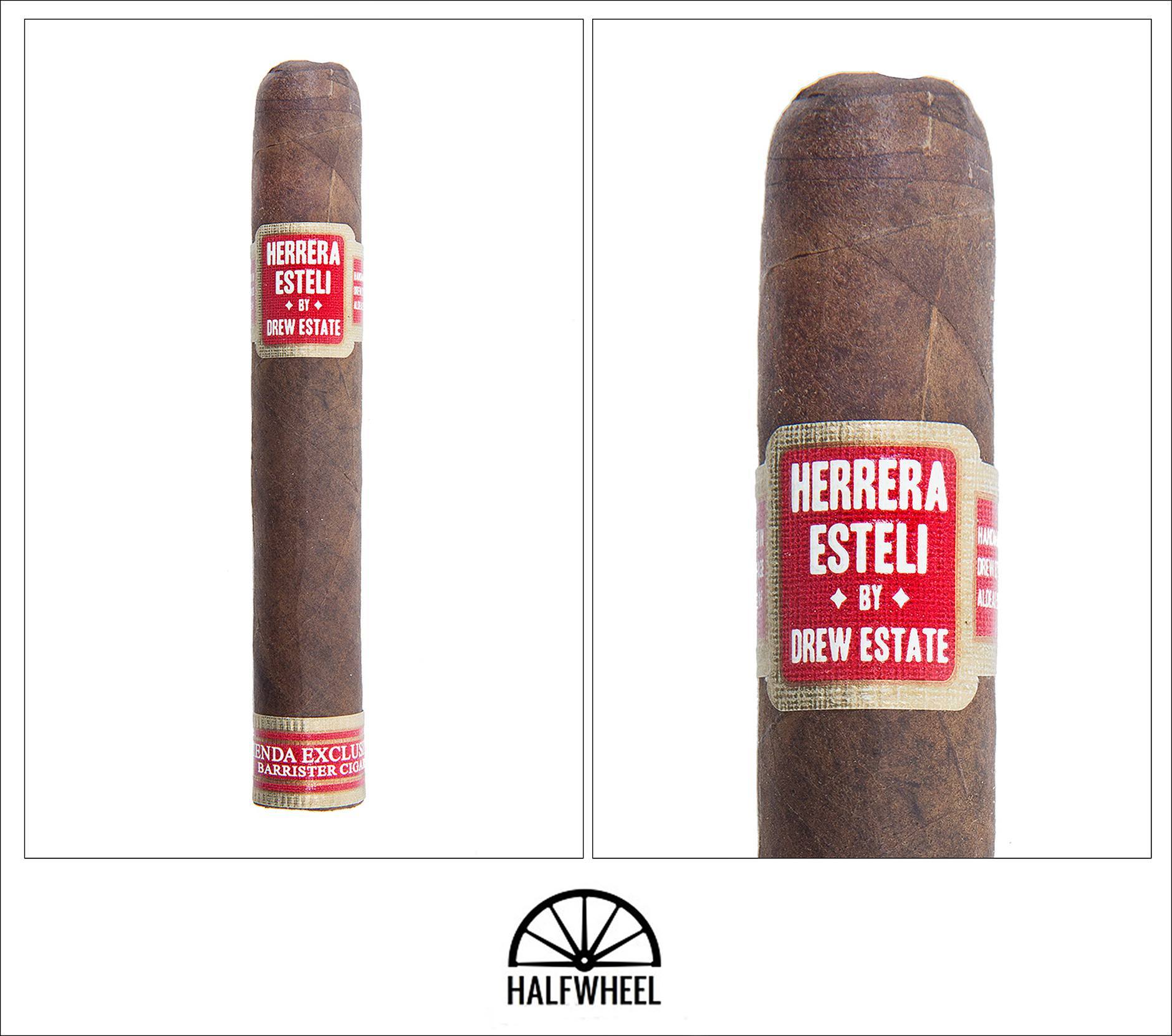 Picking up the Tienda Exclusiva I’m struck at how pretty the cigar is, even more so upon close inspection. The Herrera Esteli band uses the same design layout switching the font and background colors for a similar but very different looking band. The Mexican San Andrés is smooth with a uniform pattern on it that blends together so well you can barely even see the seams. Running my fingers over it there are only the most minor of bumps from the veins and the slightest oily feel. The aroma off the wrapper is one of a younger cigar, with bright fresh barnyard notes including hay and leather. The cold draw is so incredibly specific and unique that I’m taken aback, but immediately know what it reminds me of. I was instantaneously reminded of my great grandma’s house with light notes of old leather, a slight mustiness, a bit of a mothball chemical and a touch of baking spices. I know that all sounds kind of unappetizing but it really does mix together well for an interesting, unique and pleasant memory-inducing profile.

As I expected, the first third starts out mostly different than the cold draw with some spice, a bit of sweet peppers and this unique but not unpleasant chemical-based note that I can’t quite place. The draw is firm, but still within the acceptable range. Though each draw doesn’t bring a ton of smoke, after the draw smoke pours off the foot of the cigar. That odd chemical note has shifted enough that I can place it close to something related to gardening – not necessarily a full on spray of some sort but it’s not as natural as manure-based fertilizer, so something kind of in the middle. The burn is slightly off but a quick touch-up fixes that. The ash isn’t holding on much past a half an inch and each section has been a bit flakey. An interesting processed artificial cinnamon note has entered the mix, something like you’d taste in a off-brand snack treat. So far nothing about this cigar has been normal, though I feel like I need to reiterate that it’s not bad – in fact the odd profile is pretty enjoyable up to this point. 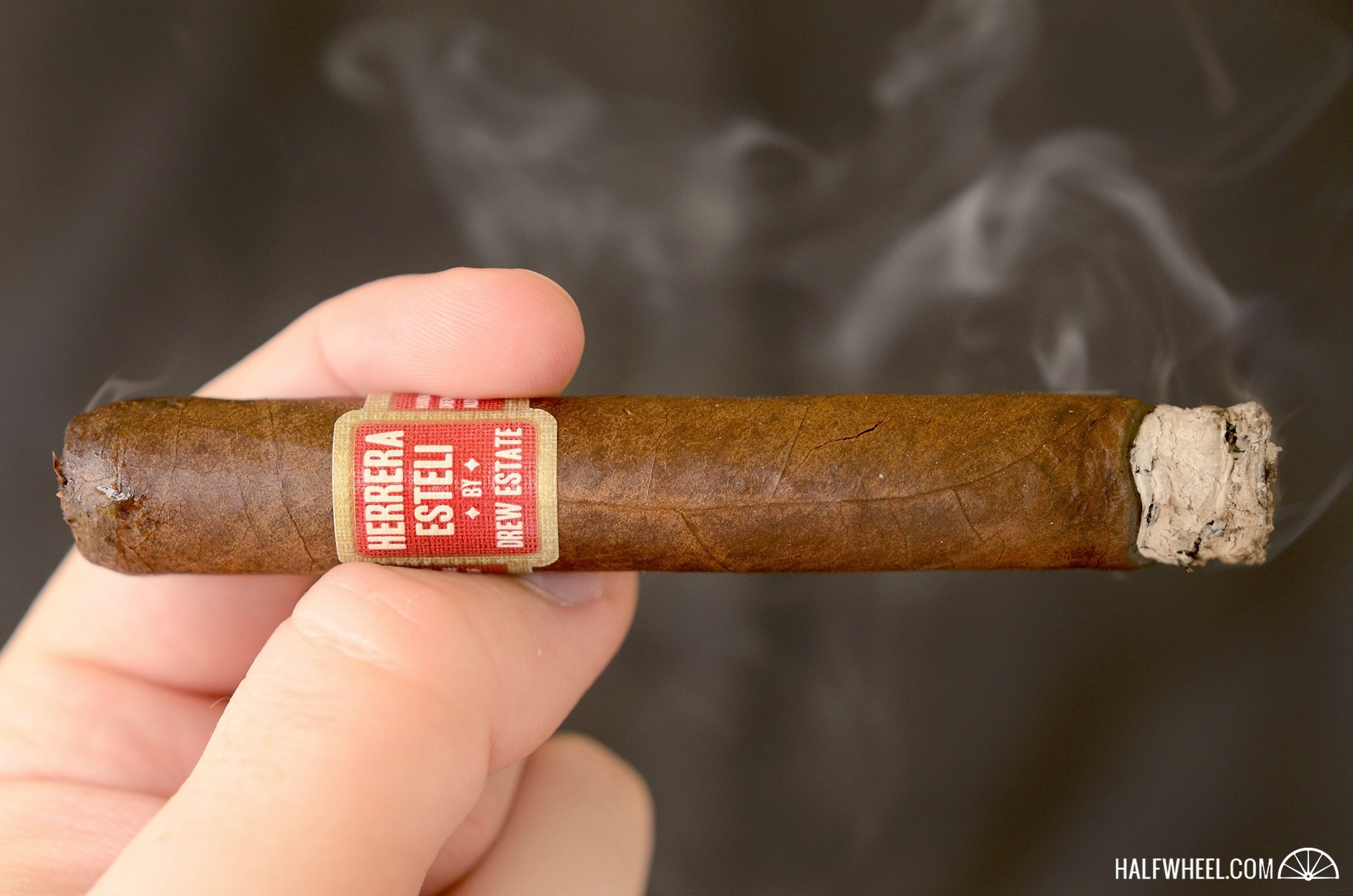 By the second third the profile hasn’t changed much, still going strong with the spice, sweet pepper, odd-but-not-unpleasant chemical note and the artificial cinnamon note. The burn isn’t perfect, but the Tienda Exclusiva is getting better, only requiring minor touch-ups here and there. By now the chemical note has dissipated to almost nothing, allowing the spice and sweet pepper notes to shine a little more. The artificial cinnamon note is still there, alongside a new gingerbread note. A quick touch-up produces a very distinct citronella candle aroma that dies down quickly – I wouldn’t have even mentioned it except it adds to the continued uncommon nature of the cigar’s flavors. Another quarter inch later there is a very different barbecue note that appears – something akin to charcoal briquettes, a little barbecue sauce and a touch of meatiness. 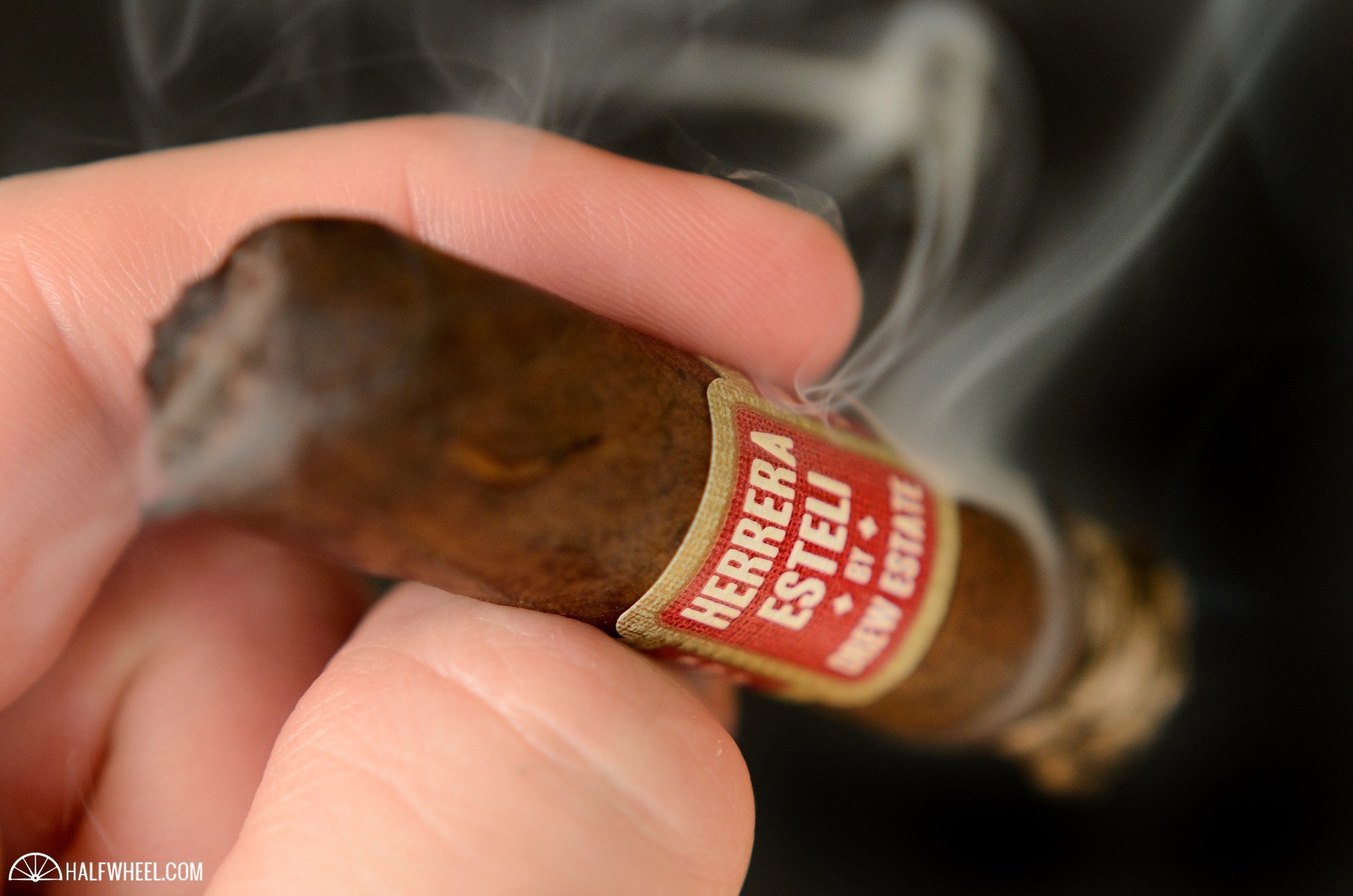 The final third continues with the odd mix of your everyday flavors of spice, sweet pepper, a little meatiness and gingerbread while the punctuation of the unusual artificial cinnamon not quite in the background, but not quite at the forefront. Though the draw has opened up a little more and smoke production is much better than earlier, the burn line still wanders around needing a few touch-ups. With about an inch left the artificial cinnamon has completely disappeared leaving the gingerbread, spice, meatiness and sweet pepper to shine in a combination of normalness that is almost surprising. 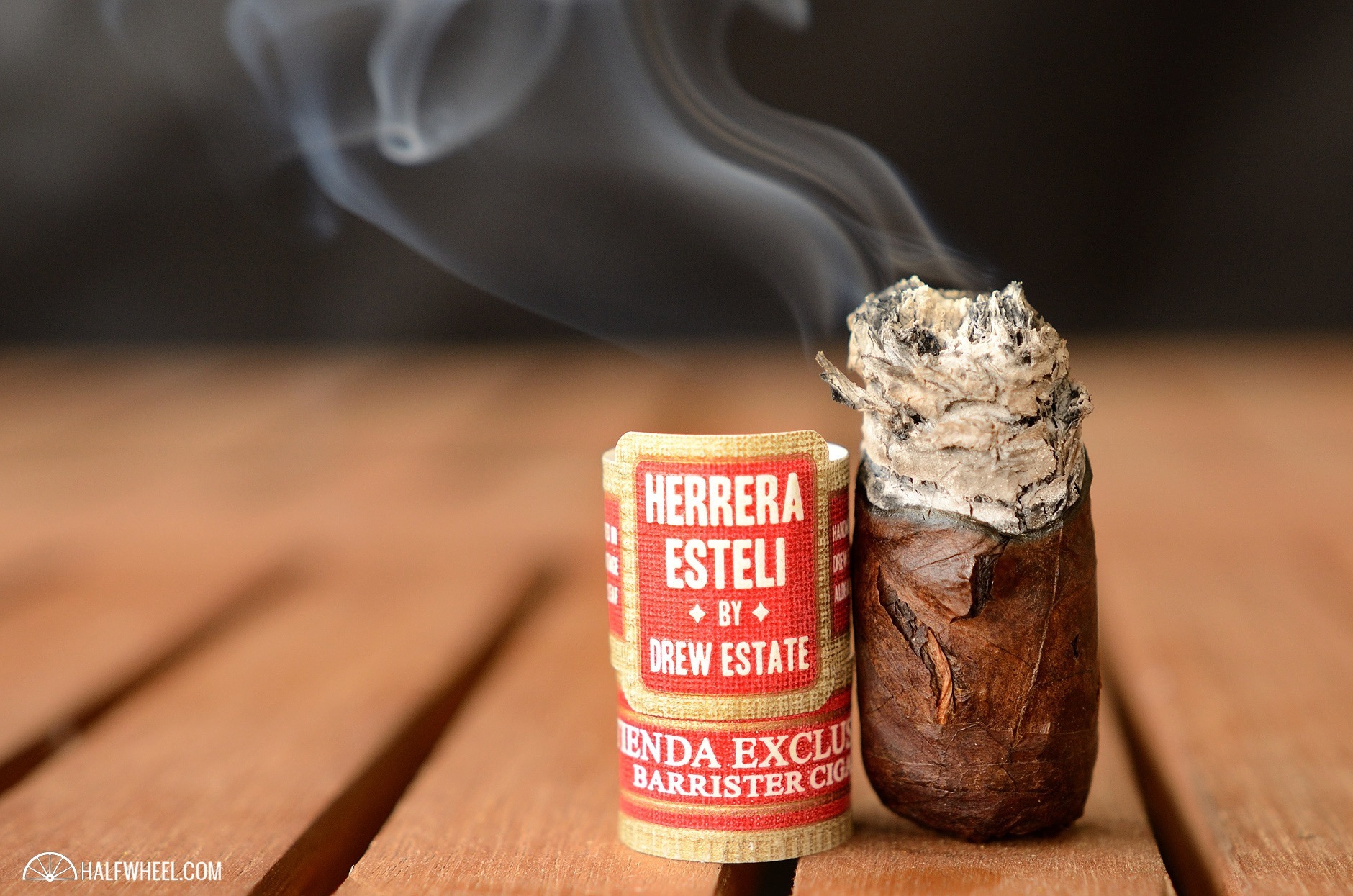 I know this profile sounds pretty strange reading back through it, and as a reviewer I’m going to relate tastes and aromas to memories and experiences that are mine and not necessarily other people’s. Having said that, whatever you might associate the profile of this cigar with — it’s still quite unique. The construction proved to be somewhat of an issue on two of the samples, but the third’s fairly decent construction showed that the issues didn’t impact the flavor overly much. The very different profile was one that I had to stop and think about a lot throughout the cigar, but in the end I still enjoyed the Tienda Exclusiva. I think some rest might take care of the chemical and artificial notes, which will probably leave it a little more normal and tasty. Until then, I can still suggest seeking these out, if not for anything else other than to experience the cigar for yourself.