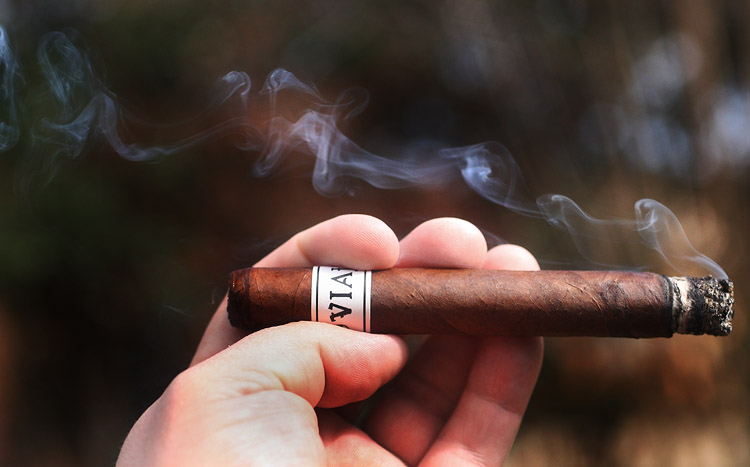 Today’s redux review is of a cigar I reviewed way back in June of 2011, the Viaje White Label Project Fifty Fifty Red. I bought a bundle of these when they were released, but I don’t think I have smoked one since the first review.

Here is what I said about the Viaje White Label Project Fifty Fifty Red back in my original review:

If you look at our reviews of the other two Viaje WLP releases, you will see that we were fairly disappointed in what we tasted. While I liked it more than the other two releases in the WLP line, the WLP Fifty Fifty Red was still not as good as some of the more recent cigars Viaje has released, i.e. Zombie. I have always liked the Fifty Fifty blend, although it is tough to find on shelves given it’s only released once a year, and this cigar definitely has a few similarities in flavor, but sadly, none of the spice or pepper that really keeps you interested. A good cigar, but mellow, not overly complex flavor wise and not one that is going to blow you away. However, put these away and forget about them for six months, as with more Viajes, it seems, and I think they will get better…

But enough of that, let’s get down to business:

Much like the first time I reviewed this WLP, which is not surprising since they came from the same bundle, the WLP Fifty Fifty Red has a very dark brown wrapper that has some tooth to it when you run you finger over it. There is just a bit of oil and it is almost rock hard with a tiny amount of give when squeezed. The wrapper smells great, a combination of leather, chocolate, espresso and black pepper.

The Viaje White Label Project Fifty Fifty Red starts out strong with wonderful flavors of dark chocolate, coffee, leather, hay and a small amount of an earth note. I am getting a fairly large amount of black pepper on the retrohale in the beginning, but that dies down pretty quickly to a nice background note. There is some spice on the tongue, but it comes and goes – never very strong and never remaining at a constant level. There is a nice change in pace at about the halfway point when the Viaje’s profile shifts to a more sweet, nutty note, while retaining the pepper and adding a bit more of the earthiness as well. I can taste the saltiness from the first review as well, but it seems much reduced from what I remember and there was none that I could detect in the first third. The flavors do get a bit muted near the end of the WLP, but not enough to concern me, and it ends nicely, never getting harsh.

Construction is excellent for the entire smoke and I never had to touch up the Viaje or worry about the draw. Smoke production is plentiful as well, white and billowy with a sharp wood scent. Strength-wise, the Viaje White Label Project Fifty Fifty Red seems to have a bit less of a punch than when it was fresh, and I would call it a solid medium.

The Bottom Line: Of all of the WLP releases so far, I thought that the WLP Fifty Fifty Red would age the best and it seems I was not wrong. Time has done wonders to the profile, and all the flavors just seem to be richer, a bit more complex and just overall more defined. Interestingly, there seemed to be quiet a bit more black pepper on the retrohale than I remember from the first time and the saltiness that I commented on in the first review is still present, but much reduced. Also, the distinction between the halves when the profile shifts, as it is supposed to in this blend, seemed to be a bit more apparent to me than when I first smoked it. Most people who smoke Viajes will tell you that they are better after some rest and the Viaje White Label Project Fifty Fifty Red bears that out, as it is a much improved cigar after only eight months.