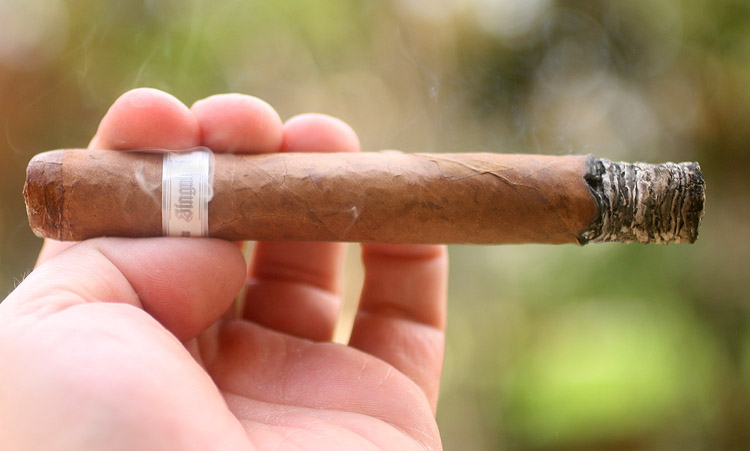 The Illusione ~Síngulare 2010~ Phantom is a 6 × 50 Nicaraguan puro rolled at the Raíces Cubanas factory in Honduras that was limited to 1,000 boxes of 15 back in 2010. There was supposed to be a limited edition released every year, but backorders in tobacco delayed the 2011 version.

However, for 2012, the LE project will feature boxes of two different blends. According to an interview on Kiss My Ass radio show, Dion said that one of the blends will feature a Cafe Rosado Corojo wrapper, while the other cigar in the box will be wrapped in a San Andrés Maduro wrapper. At this time, there is no release date for the Síngulare LE 2012.

Here is what I said about the Síngulare Phantom in my original review:

I have always been a fan of Illisione cigars (the ~mj12~ has long been a go to cigar for me), and I have to tell you, this is a slightly different profile from most of Dion’s sticks. The complexity was great, with flavors fading in and out all the time, and it is definitely the mildest smoke in the Illusione line, but with a great spice that just made everything better. Add in the amazing construction, burn and draw, and this is a winner in my book. An almost perfect example of how a cigar can combine spice, flavor and strength effectively. Honestly, I liked the Síngulare “Phantom” just a bit more than the ~eccj~ 15th, and I can only imagine how these are going to taste with a few years on them. The Síngulare starts off great immediately with strong flavors of graham cracker, sweet cedar, chocolate and a slightly bitter citrus that comes and goes throughout the first third. There is a perfect amount of spice on the tongue, but interestingly, none at all on the lips, and it really brings the rest of the flavors together. The second and final third adds a little nuttiness, more sweetness and a great floral note that ebbs and flows. Complexity of the Síngulare is helped by the spice. The construction is excellent for the entire cigar, with a perfect draw and wonderful burn, just a joy to smoke in that regard. Great white smoke, and plenty of it as well. The strength starts out as a mild medium and increases to a solid medium by the end of the cigar, but it is a very gradual increase and never gets beyond that.

I mentioned in my first review that these would probably age well, and I was not wrong. Everything I loved about it the first time (complexity, flavors, perfect amount of spice) is still there, but it is just more balanced overall. I also found it to be a little sweeter profile than the first time I smoked it, which is also a very good thing. I recently smoked a ~f9~ from 2007 and found that I really enjoyed it, leading me to believe that people, myself included, probably don't give Illusione cigars the credit they deserve when talking about how good specific cigars can age. I was very impressed with this cigar and how it has aged, and really wish I had more of them.