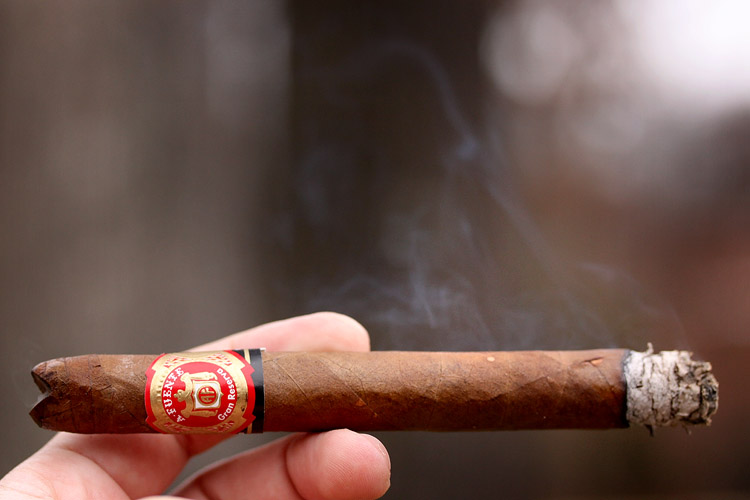 The Don Carlos Lancero is a cigar that I should like.

Last May I wrote the following:

I’m a bit unresolved at the consistency issues with the $18 hard-to-find cigar, but it has to be noted. However, when the cigar is on, it’s quite good, a bit more than what most would expect in regards to the idea of a Don Carlos in Lancero form, but that classic Cameroon flavor that the Casa Fuente is noticeably lacking. I still much prefer the Casa Fuente over this It’s another great example of Fuente and Cameroon. The wrapper is luscious with a few markings, but still the best of the best when it comes to Cameroon. Aroma has that classic barnyard, a bit of cedar, but even with the cedar and cellophane both of the circa 2005-2006 examples seem a bit lighter than I recall. Cold draw is a bit sour, but there’s a great raisin and cinnamon mixture that seems more developed with the extra age. Pre-light aroma is great, a deep sweet toastiness.

The Don Carlos Lancero starts with the classic nuttiness that loses sweetness over the course of thirty seconds while a black pepper emerges from the back. Overall, I am not able to pick up the coffee note I found so prominent a few months prior, but the layers of nuttiness dominating sweetness and a black pepper are still at the core. Cedar becomes particularly apparent in the second third. It closes with a bit of a rich earth that doesn’t get close to challenging the nuttiness, but is still quite strong. Construction-wise, there’s not much to complain about: draw is right where I like it, burn rate is consistent, smoke production is decent, etc. Strength is medium plus on average. It’s everything you’d expect from a Don Carlos Lancero and not a place that you’d start criticism.

The Don Carlos Lancero is a good cigar. Out of the fifteen or so I've been lucky enough to smoke, there have been a few more that have been disappointing than I would have liked or thought. Still, this is a good cigar. Much like the FFOX Phantom, I'm just not sure this blend actually does best in this blend. Price aside, I'd take a Don Carlos #2, #3 or Presidente over the Lancero, even if it is my normal go-to size. The Don Carlos Lancero a la 13, i.e. the 2011 release, even in its very limited fashion fortunately put more of these on the market and at a pretty significantly lower price point, although, still more than the cigar is worth for me. For me, the Casa Fuente Lancero is the better cigar, by a lot, and that's why I'll spend the extra $11 or so dollars each and every time; if only I had more opportunities.