Rain was the theme of day five of the 2015 ProCigar Festival in Santiago, Dominican Republic. It started late Thursday night and continued into most of Friday, making for a bit damper and muddier of a day than most of the attendees planned on, but it certainly didn’t seem to put a damper on anyone’s spirits. Charlie Minato and I spent the day at La Flor Dominicana, starting off at the company’s farm in La Canela before heading to the factory in Tamboril. The rain made for some interesting challenges, starting with the tour bus getting stuck in the mud on the way into the farm, which brought more than a dozen of the farm workers out to lend a hand getting it unstuck. Fortunately it was a quick process to get it back out to drier ground. While walking around the fields and ranchos, there were a few sandals that came off in the mud, some people resorted to tying plastic bags around their feet, and the rest of us just toughed it out. After Litto and Tony Gomez greeted the group, we were quickly introduced to another new friend, an adorable little pup that belonged to one of the farmers who quickly got dubbed Brugy, as in Brugal, the Dominican rum. He quickly took to Arielle Ditkowich of La Sirena and Mike Baka, aka 2ESAE, of UR New York, the artist collective that has done projects for Zino, following them both around with tons of youthful exuberance. The farm is immaculate, with both shade and sun grown sections, as well as areas being used to test out new varietals. There wasn’t much action on the farm as most of the tobacco had either been picked or was in need of more time on the stalk, while some sections were being rested and had nothing to show other than neat rows of dirt.

With mud caked shoes the group headed back on the bus to the factory for an incredible lunch highlighted by a pair of roasted pigs. We made a quick stop in the office, where the first thing that I noticed was a laser engraving device, which the company has used for several of its releases, including the recent edition of the La Flor Dominicana A. As Tony Gomez told me at the 2013 IPCPR Convention & Trade Show, it takes 30 minutes to make the lid for each box of the Double Ligero A Oscuro Natural August 2013, adding somewhat jokingly that LFD will keep making the cigars until the machine breaks. The factory tour that followed took us through the normal stops, sorting, fermenting, and so on, with one of the final stops in the rolling room, which is not only home to the escaparate and packaging areas, but is a former nightclub that Litto and his team converted. It has a circular stage in the middle of the room with several comfortable wood chairs, with bunchers and rollers along the long sides of the building. I was intrigued to see the molds used to make the company’s Chisels, and a bit surprised to see small scales on many of the bunchers’ desks to measure each cigar for proper weight prior to going in the mold.

Rolling crates of tobacco are used to store the leaves before they head to the tables, and getting to smell some of the component tobaccos were a real treat, especially some of the company’s signature ligero. If you follow LFD on Twitter, you’ve undoubtedly seen photos of the aging room with its light colored cedar cabinets, and photos can only do so much justice to what a great space it is. 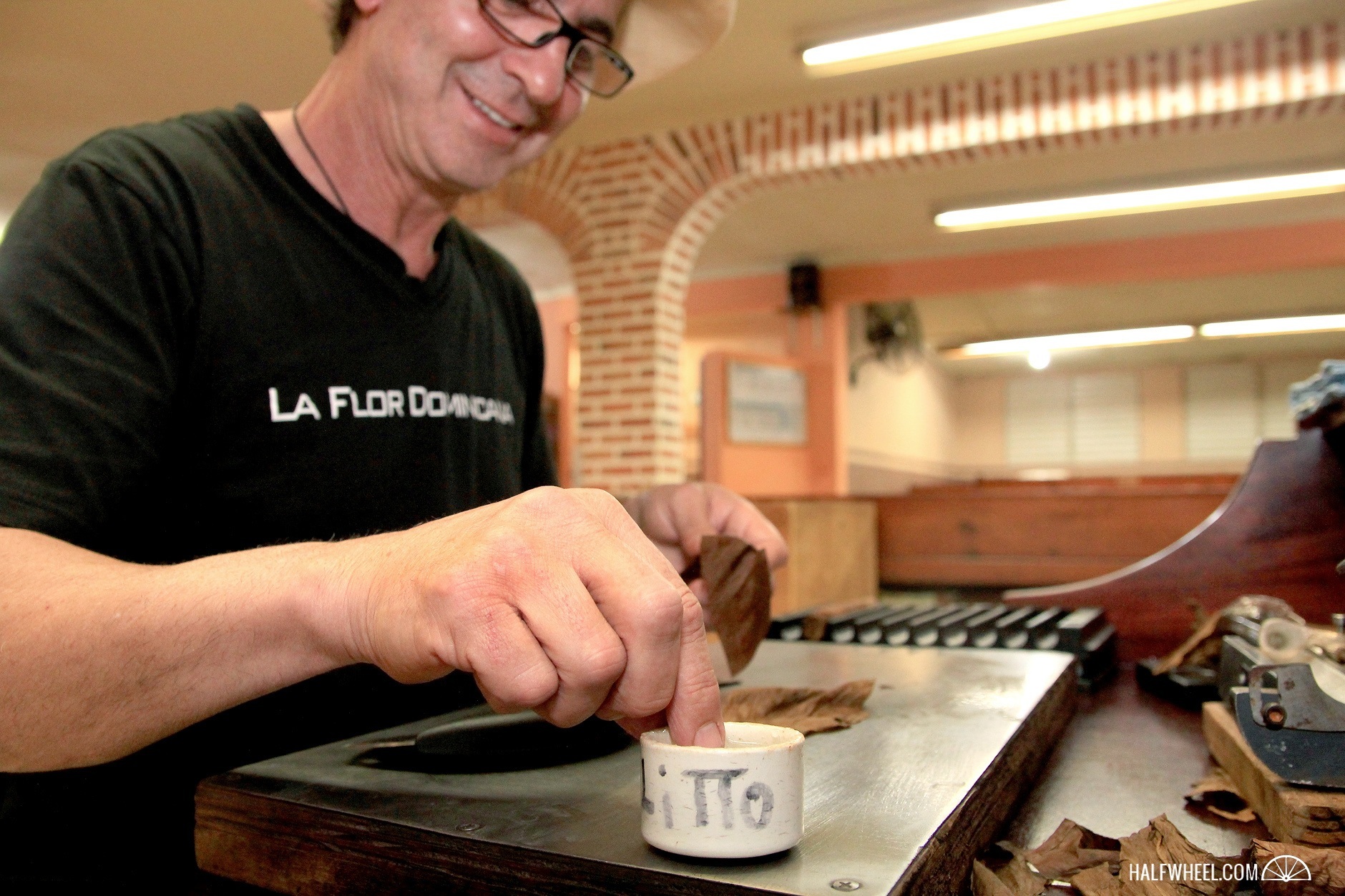 To wrap up the tour, Litto and Tony presented each of the attendees with a personalized, laser engraved cigar coffin before taking a group photo back in the rolling room. They then invited Charlie and I to stay behind for to talk about a number of things, as well as to see Litto roll a couple of cigars at the desk known as Table One. After getting back to the hotel with still more rain falling, we quickly got ready for the week’s gala conclusion dinner that had somewhere in the neighborhood of 700 attendees and raised $100,000 for a pair of local charities, thanks in large part to the auctioneering work of Manuel “Manolo” Quesada Jr. and Michael Herklots, who grabbed the mic a few times to encourage the bidding to continue as well as broker a few deals between buyers and auction item providers. Many of the items can be seen here, though the picture of the Tabacalera Palma 79th Anniversary humidor doesn’t do it justice, and there were a few additional items added, including a custom domino table signed by the members of ProCigar, artwork from UR New york created during the event, and a humidor signed by the members of ProCigar containing an assortment of their cigars.

Henke Kelner was honored during the event by the ProCigar members for his contributions to the Dominican cigar industry, a touching tribute that brought together his family as well as many of the biggest names in the country’s cigar business. The night concluded with a video Tony Gomez made about what the members of ProCigar might be doing had they not gotten into the cigar world and dancing to a DJ and electric violinist.

Violin on the dance floor?