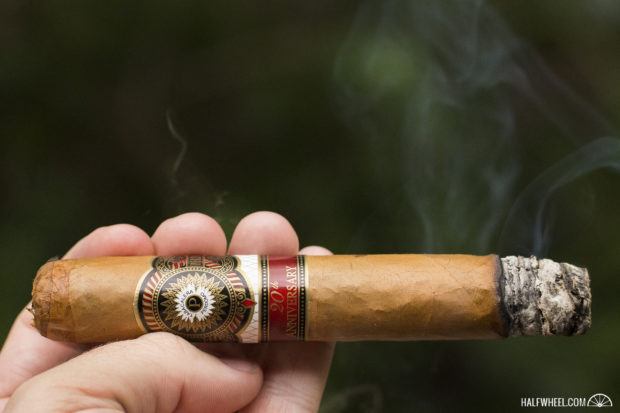 In 2012, Perdomo Cigars celebrated its 20th anniversary, and as cigar companies tend to do for such events, it released a cigar line, the aptly named Perdomo 20th Anniversary.

But as many fans of Perdomo likely noticed, there was one version missing, a Connecticut. The company has frequently released its new lines in variations that make use of all three wrappers, though not in this case. But after four years and a few additions to the other two lines, that would change.

To round out the line of cigars commemorating the company’s 20th anniversary, Perdomo unveiled a Connecticut-wrapped version at the 2016 IPCPR Convention & Trade Show. Unlike its Sungrown and Maduro counterparts, the Connecticut doesn’t get a box-press, as the leaf is too delicate to undergo the process. 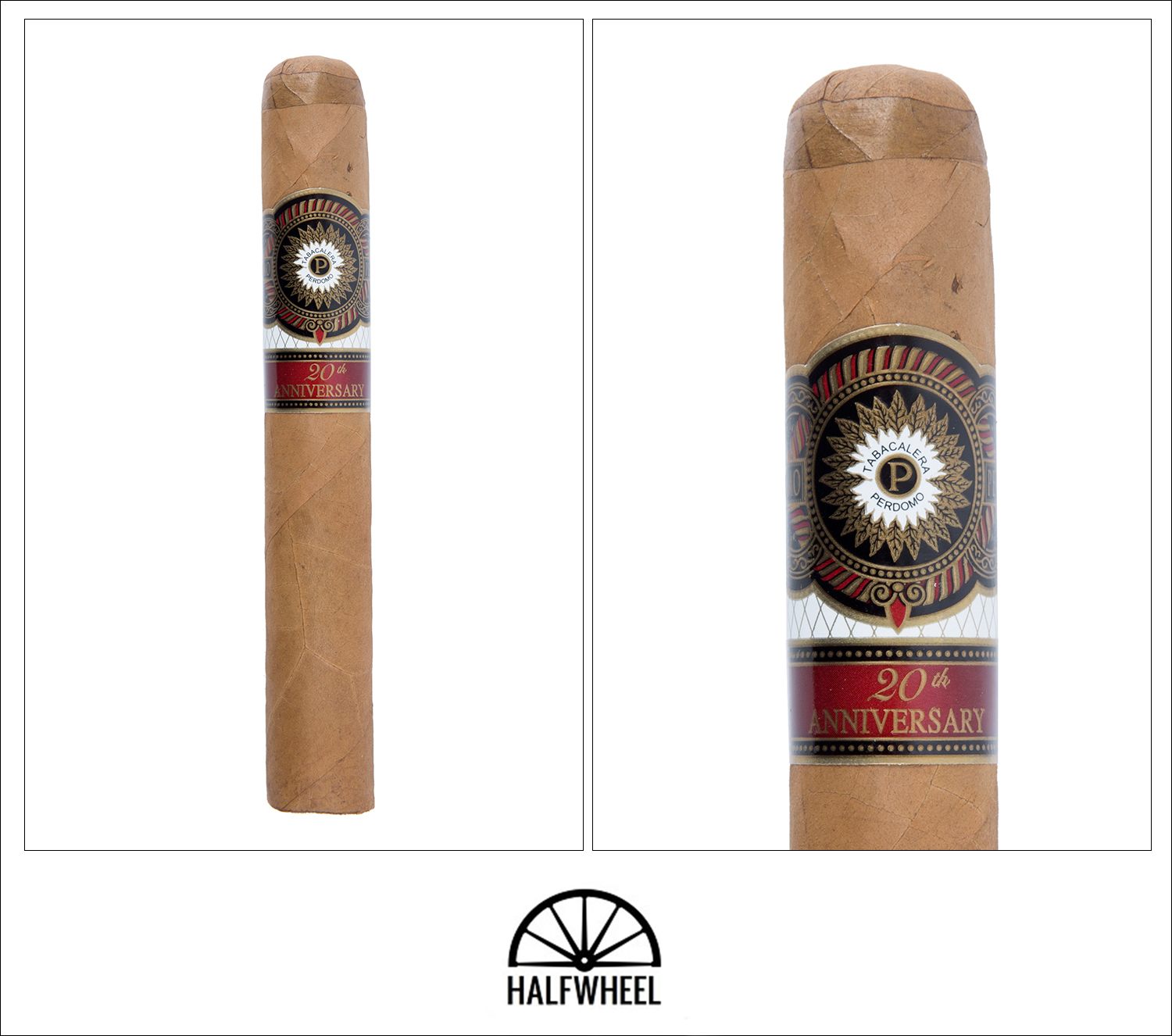 The wrapper of the Perdomo 20th Anniversary Connecticut is a butterscotch hue that has a golden aspect to it to help give it some visual pop. It’s smooth to the touch with just a bit of texture and a few darker spots. One of the things I’ve found interesting by this wrapper as well as some other Connecticuts used by Perdomo is the vein structure; for some reason it seems particularly distinct here, as there seems to be an abundance of small veins branching out from the larger ones and they are a bit more visible than on other cigars that use Ecuadorian Connecticut wrappers. It’s similar if not identical to the vein structure you see on some Cuban cigars, though I’ve been seeing it on more and more Connecticut leaves from several countries. While generally well-rolled, I find the occasional soft spot near the head, but the consistency of these appearances is impressive. An aroma of buttered white bread is the first thing I get from the foot, from there it branches off into sweet cream and crackers. The cold draw advances the aroma into a heartier biscuit or toast note, depending on the sample. It’s chewier with a bit more of a flour base to it, shedding most of the sweetness from the butter, while air flow ranges from good to a bit loose.

Given the Nicaraguan binder and filler, I’m not surprised that by the pepper and earth that’s present in the first puffs, and while I hate the line this isn’t your typical Connecticut, it’s certainly applicable here. There’s a good mouthfeel from the smoke thanks to some underlying pepper and multi-dimensional body, a solid medium that will feel less so if you smoke full bodied cigars regularly or feel a bit more than medium if you stick to the milder side of things. Retrohales match up near perfectly in terms of intensity and provide a complementary balance to what the palate gets, an upfront profile of pepper and toasted white bread. A retrohale detects a slight shift in the pepper heading into the second third as it gets a bit crisper and brighter, adding a slightly floral take on it. Smoke production is solid, the draw has been excellent and the burn line razor sharp. 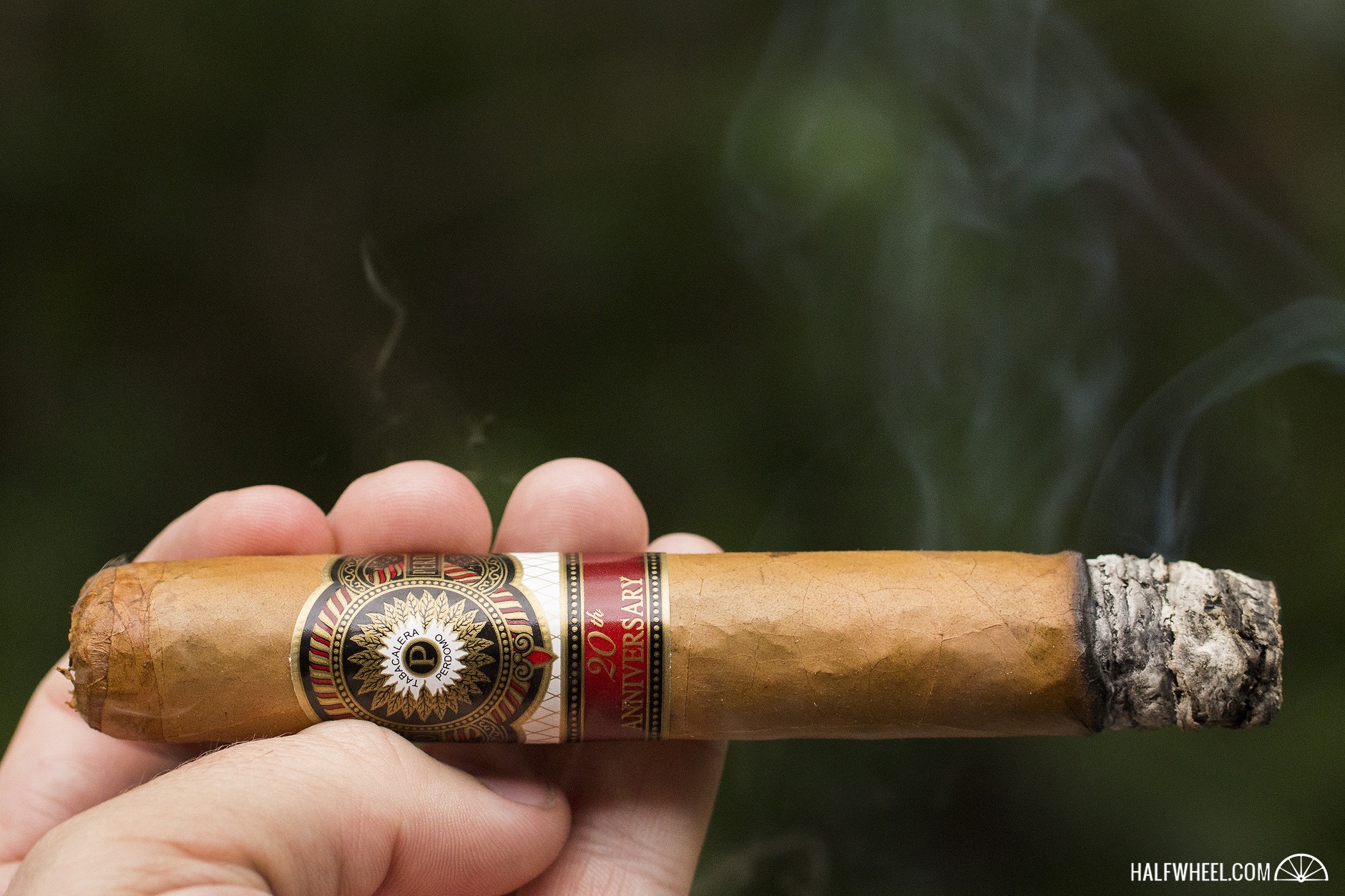 Floral pepper isn’t a term I use much in cigar reviews, but the Perdomo 20th Anniversary Connecticut has me thinking of it as it enters its second third. In some ways, the aroma makes me think of sourdough bread in the way it hits the nostrils, though the flavor doesn’t quite hit the palate for a few more puffs. The sourdough bread note continues to build, thickening up a bit as pepper moves into a supporting role. The ash gets a bit flakier here as well, and just past the midpoint the cigar picks up an interesting sharpness that isn’t particular sour or metallic, yet is begins to be off-putting fairly quickly. There are a few lulls in the pepper, though they are infrequent, but when they come along they reveal the earthy undertone of the Nicaraguan fillers. 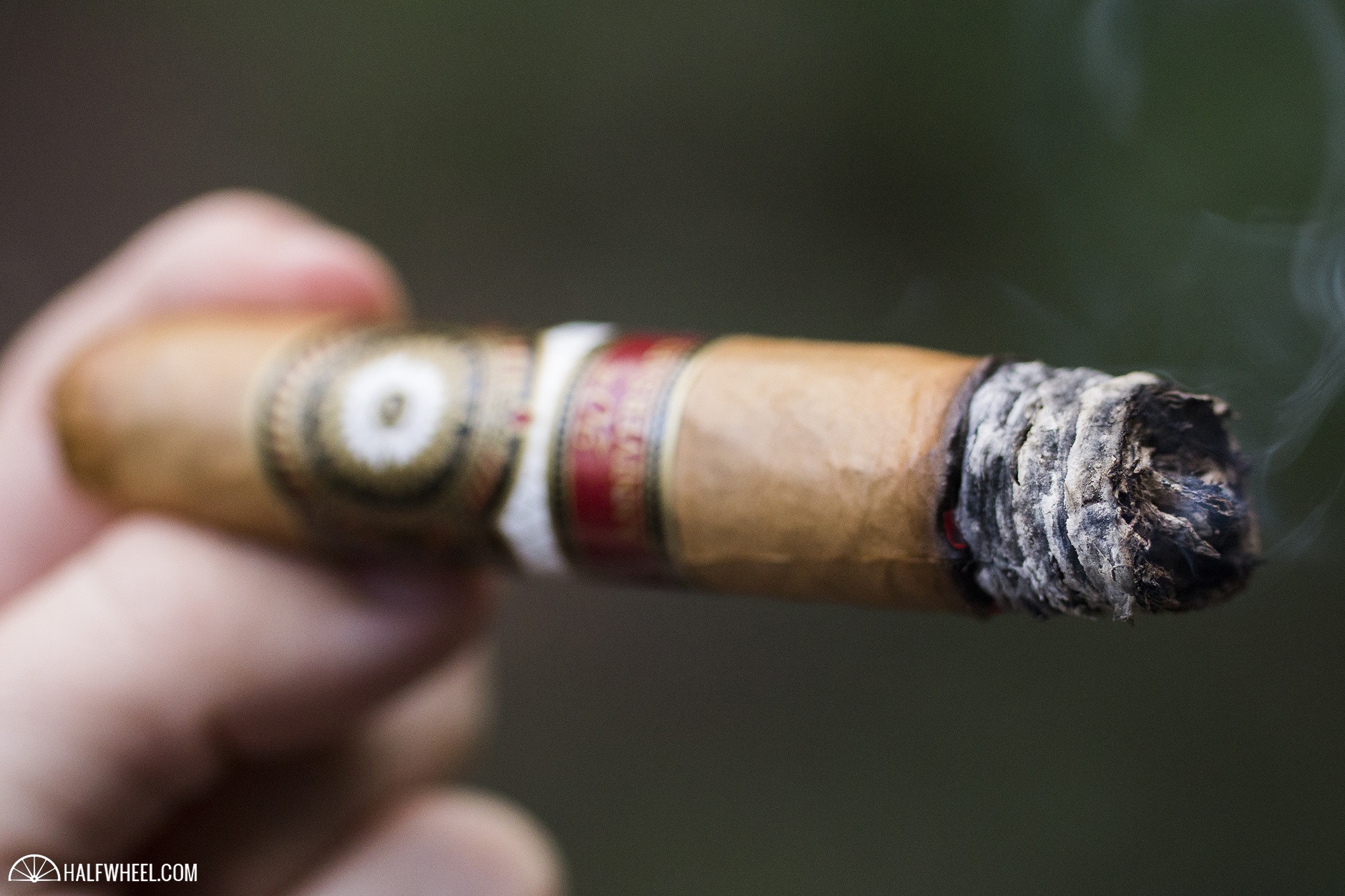 Pepper has settled down at the start of the final third, leaving an interesting flavor profile that continues to show sourdough bread quite prominently yet has a characteristic that I just can’t place but continue to enjoy. At its cleanest, the cigar offers a flavor that is a mix of pepper and corn flakes with just a bit of sugary glaze, at its more gruff points the Nicaraguan terroir is more prominent and provides a bit of gruffness. The sourdough vanishes quite rapidly in the final two inches, and in its absence a peppery if hard to place flavor comes in that is a bit rough cereal grain, biting wood and varying amounts of earth. The one thing that is saved is the aroma, driven by a rich firewood smell that is comforting on a cool winter evening. 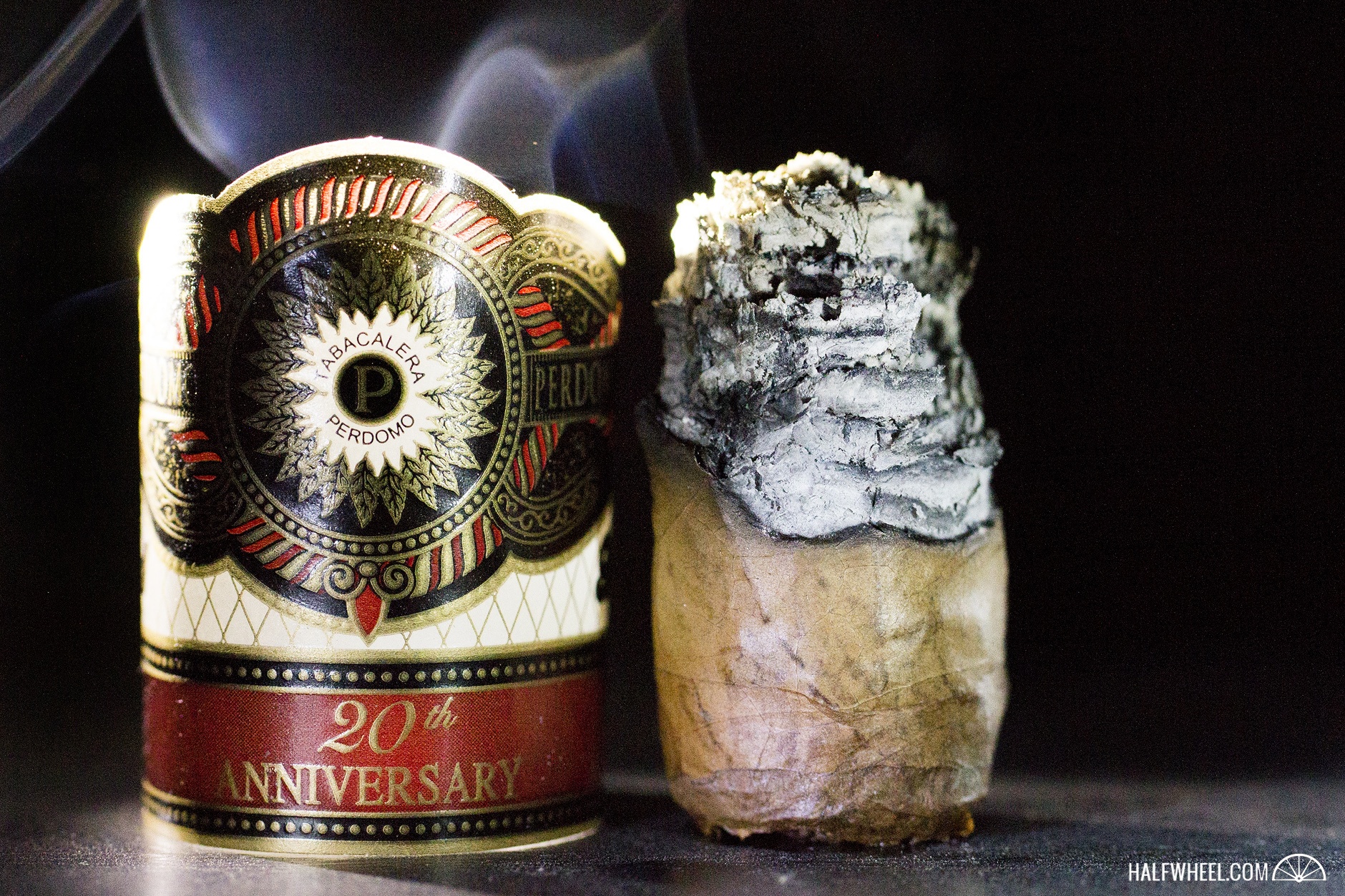 Releasing a cigar four years after the event it celebrates seems a bit odd, but in the case of the Perdomo 20th Anniversary Connecticut, I'm inclined to say that better late than never is certainly applicable. Each of the three cigars was remarkably consistent, showing the same general strength, progression of flavor and high level of construction. I certainly don't think this 60 ring gauge vitola affords the blend the best format by which to shine, but allows it plenty of room to show what it has to offer.