With the U.S. Food and Drug Administration (FDA) choosing to regulate the premium cigar industry, manufacturers responded to the new rules in a number of ways. Almost every company hurried new cigars to the market in limited quantities ahead of the Aug. 8 deadline and many who have a good bit of history reached into their archives to resuscitate old brands. In the case of Rafael Nodal and Boutique Blends, he went into the company’s vaults to bring back the Oliveros brand, reintroducing it to consumers via several lines.

While the core line is the Oliveros Gran Retorno, a regular production line with three different wrapper options, Nodal also released a limited production series called Oliveros All Stars, or as Nodal more affectionally refers to them, duets with other brand owners. For the debut release, Nodal worked with Ernesto Perez-Carrillo, Jr., an interesting combination since both are musicians as well: Nodal, a pianist; Perez-Carrillo, a drummer.

The two Dominican-based cigar men picked Dominican habano leaves for the filler and binder of their collaborative cigar, while heading north to the U.S. for a Connecticut broadleaf maduro wrapper, a leaf that is not currently used in Nodal’s portfolio. Production was handled by Perez-Carrillo at Tabacalera La Alianza S.A. The line is being released in four sizes, all named for musical terms and all coming in 20-count boxes. 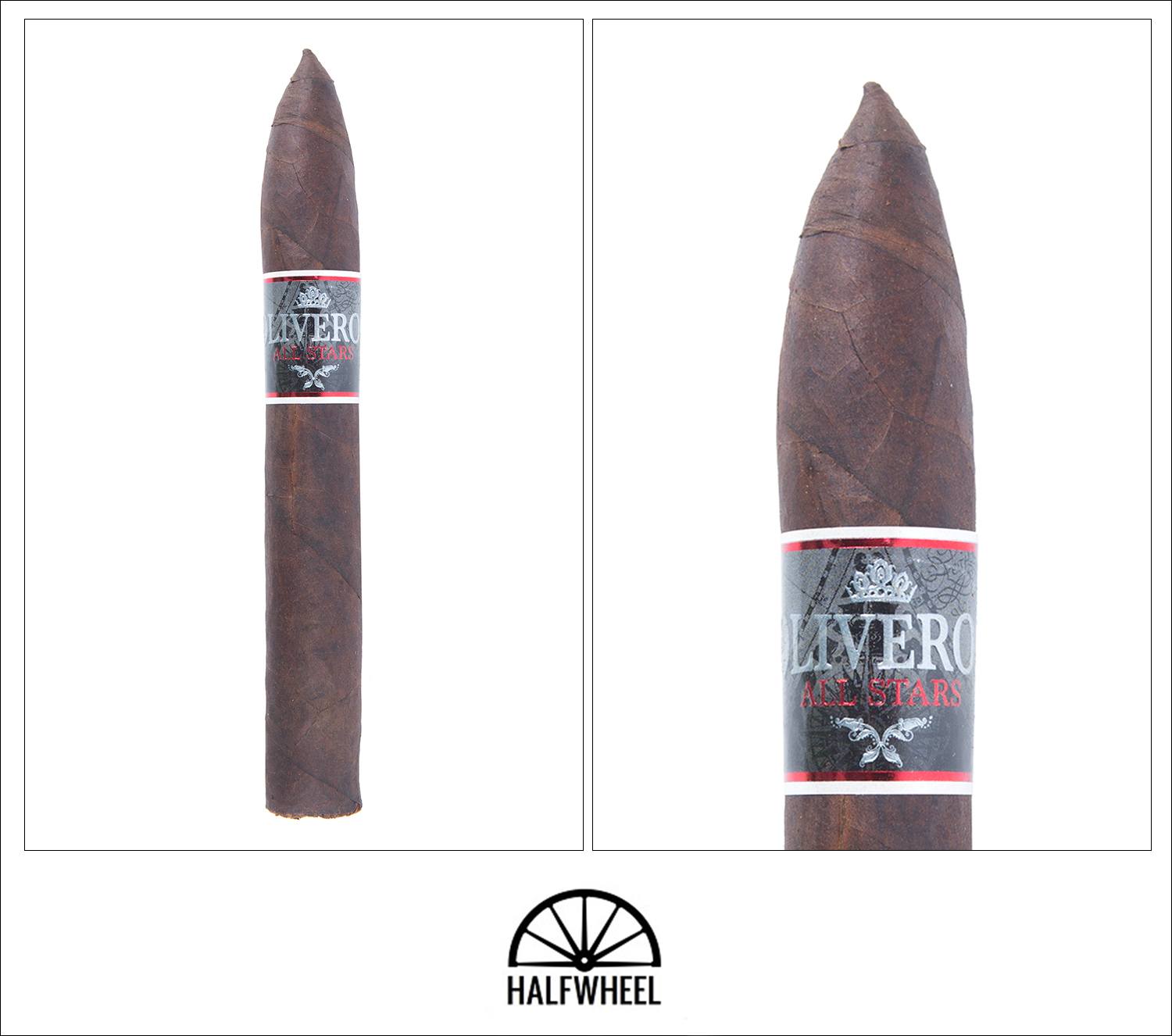 Even for a torpedo, the Oliveros All Stars appears longer than its stated 6 1/2 inches, as the head is gradually tapered and naturally draws the eye upward. The cigar has an incredibly firm core, yet the wrapper shows a slightly oily suppleness that tries to counteract the density underneath it. The broadleaf wrapper can be quite attractive despite some variation in color, rich with tooth, a somewhat gritty texture and the faint glimmer of crystallization. The foot is complex and initially sweet with dried fruits but quickly followed by cool, moist cake or some spin on dough or bread, along with a bit of chocolate and pepper. One sample is much richer than the other two, diving deeper into aromas of beef jerky and coffee as well. The cold draw is almost a mirror image of the smell, and while I use terms dried fruit and moist cake, I by no means imply that this tastes like fruitcake. The flavors are distinct yet work in combination without becoming one.

The first puffs of this Oliveros All Stars release are thick and hearty but not particularly peppery or distinctive in terms of flavor other than a quick hit of dark berry sweetness and maybe a hint of soil depending on the sample and how it hits your taste buds. Specific flavors begin to reveal themselves in the first inch, with a warm chocolate brownie in the nose that quickly picks up pepper and more hints of earth, while the palate is treated to a more subdued version that doesn’t seem quite ready to come out of its shell until some thick cherry syrup joins the mix. The burn line through the first inch is sharp and even, with a fairly dense and white ash left in its wake that holds on seemingly easily through the first inch. A bit of clean chalk and white pepper come along to brighten up each retrohale, and the two become the drivers of the aroma as the cigar approaches its second third. 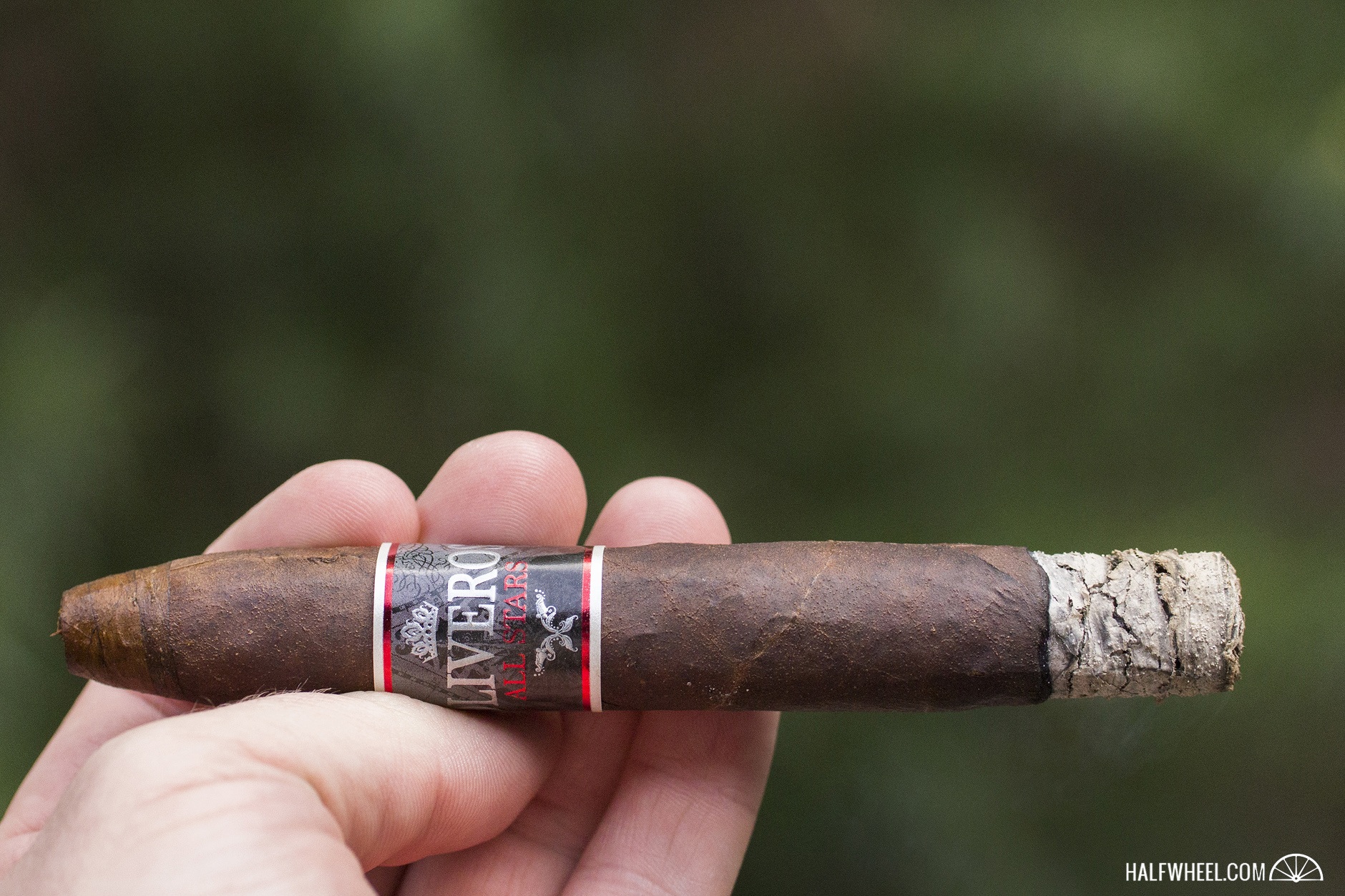 If I had to divide how the Oliveros All Stars hits the senses, it seems to be about 75 percent for the nose and 25 percent for the palate, at least at the start of the second third, though it seems to be changing as a bit of coffee starts to enter the equation before being pushed out by the same chalk and white pepper that the nose has been enjoying. The cherry note returns and really has me thinking of a chocolate covered cherry, though it’s not as overtly sweet, and a bit of mint gets mind taste buds going in other directions. The burn rate has slowed quite a bit since the first third, though it’s not at the expense of combustion or the burn line, but rather the tobacco just progressing at its own pace. By the end of the second third, the flavor has gotten a touch more robust by shedding the white pepper and chalk and embracing a heartier pepper note with a touch of underlying sweetness beginning to emerge. Even without a retrohale, the nose will get a good amount of pepper from the smoke. If there was a leaning towards a fuller flavor at the end of the second third, the Oliveros All Stars takes a decided step towards it shortly after the burn line enters this portion. While the traditional broadleaf flavors haven’t been present for much of the cigar, they leap out of the background and soak the palate in robust earth and rich sweetness; it’s smoky, a bit gruff and quite enjoyable, and the richness of the flavors is the biggest variable through this point. The crescendo of flavor holds for a good inch before beginning to evolve again and losing a bit of its cohesion; the smokiness turns into a char note, the sweetness dissipates and the earthiness turns into rough soil. While each sample gets smoked down pretty far, it’s easy to leave an inch or so and put it down right after its peak feeling completely satisfied, though I must say that the first five inches deserved a better finish than the last one and a half offered. The flavors of the inaugural Oliveros All Stars are bold and vibrant, true to the wrapper but also deep enough to not be monotonous. Despite being a long cigar, it rarely gets boring and stays balanced until its finale, with great construction from start to finish. While collaborative cigars have had a hit-and-miss history and many times fade off into the archives—a fate that may indeed await this cigar—it's easy to say that this is a performance worth making an effort to catch.