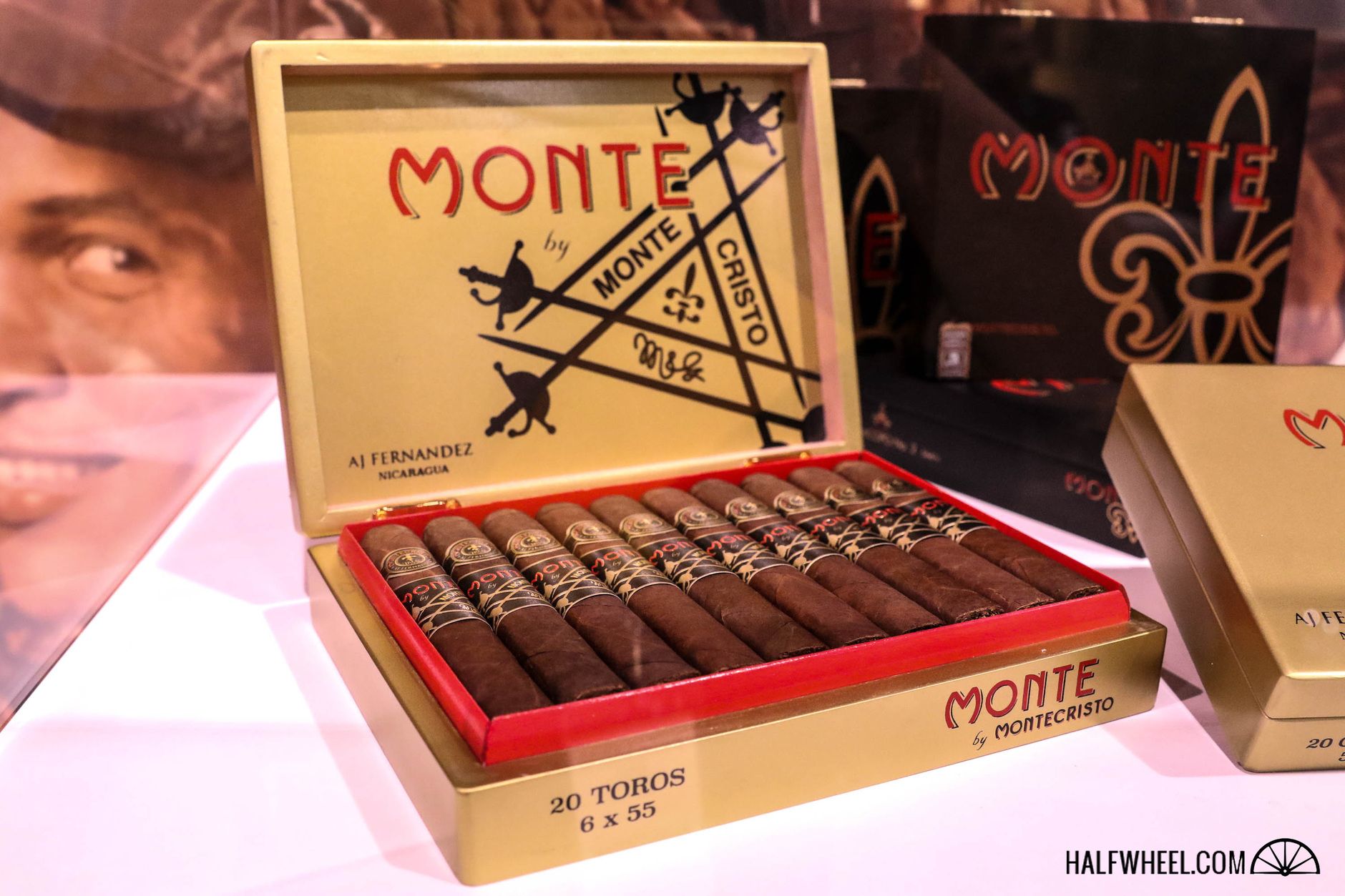 This cigar uses an Ecuadorian habano wrapper, a Nicaraguan corojo 98 binder and Dominican piloto cubano and Nicaraguan criollo 98 fillers, and is offered in four sizes:

During the 2017 IPCPR Convention & Trade Show, Abdel Fernández told halfwheel’s Patrick Lagreid that the Montecristo brand was the one he was looking forward to working with most, given its iconic status both in its Cuban version as well as the one available to U.S. consumers. As has been a growing trend, most of the cigar is covered by bands, notably a large secondary band. There’s a semi-aggressive box-press that creates a rectangular shape for the dark Ecuadorian wrapper. Aroma off the wrapper has leather, roasted nuts, burnt popcorn, acidity and some barnyard—all of which are mixed to the point that nothing dominates. The foot is sweeter, with baker’s chocolate, red pepper and ammonia present on one sample. It’s odd as it’s not that noticeable initially, but appears when the inhale exits the nasal passage and hits the back of the throat. Fortunately, none of that ammonia is present on the cold draw; instead there’s bittersweet chocolate, lamb and raisins on top, with black pepper on the middle of the tongue. It’s sweet and peppery, but also short-lived as the flavors departing the palate rather quickly unless I take a very deep cold draw.

It starts with sweet breads, a generic cereal, fading creaminess, some nutmeg and a touch of pepper, but the latter never really takes hold. The burn of the Monte by Montecristo AJ Fernandez Toro is not great, but I avoid a touch-up on two of the three samples. Flavor-wise, there’s cherry woods, white pepper, sourdough bread crust, some mild dark chocolate and jalapeño pepper through the nose. A bigger intake of smoke provides some banana nut bread. It’s medium-full in body and flavor, medium-plus in strength. Burnt breads, a generic woodiness, creaminess, and minerals dominate the final third. Through the nose there are herbs, a mild white pepper, peppermint candy, and a pineapple sweetness. The pepper is notably long-lasting, beating out all other flavors into the finish in terms of being the last one standing. While the burn remains uneven, I again manage to avoid touching up two of the three samples, though I’m guessing it’s just delaying the inevitable. It remains medium-full in body and flavor, though the strength has now picked up to similar levels and is showing signs of getting much stronger. And stronger it gets. The Monte Montecristo AJ Fernandez Toro gets more intense in the nicotine department as I take each puff, culminating in a cigar that is about as full as anything I’ve smoked by the final inch. Flavor-wise, the burnt breads are now more of a fire place toastiness—layers of charred notes—surrounded by earthiness. There are faint hints of flavors trying to cut through: orange peel, grapefruit, creaminess and white pepper, but it’s toast before anything else. Some sharper pepper picks up on the back of the throat, a relatively new sensation despite the various peppers throughout the cigar. The touch-up finally happens, though by the inch-mark it’s equally as relevant for the burn line as it is to keep the cigar burning. The problematic sample not withstanding, this is an okay cigar. It is strong, progressing to very strong at the end, but the flavor just never came together for me. Yes, there were complexities, but they were drowned out by a woody and toasty mixture, save for the final third. A.J. Fernández has become known for making good cigars with equally good, if not better, price points. This simply is not that.