At the 2017 IPCPR Convention & Trade Show, The Lotus Group/Integral Logistics, rolled out a total of 28 new accessories for its Lotus and Vertigo lines, and at the higher end of the spectrum was a quartet of new lighters for its flagship Lotus brand, with the headlining new product being the Citadel Flat Flame 3 ($120).

It’s a lighter that comes with a feature that I’ve generally considered to be closely associated with the Lotus brand, the flat flame. In particular, it’s a feature that has been used before on the Black Label by Lotus line, specifically on The Dictator and El Presidente models. However, as announced during that trade show, the Black Label by Lotus line is going away and will be absorbed into the regular Lotus portfolio as existing stock gets depleted.

First, it’s important to understand how the company achieves this distinctive flame shape. The lighter uses a single jet torch underneath a piece of metal with a slit in it, about a centimeter long and 2mm wide. When the flame passes through the opening, it is fanned out into a flat, fairly wide flame. It’s a fairly simple idea, though one of those things that has gotten only limited acceptance in the wider cigar accessories market.

In addition to the distinctive and wind-resistant flat flame that the company guarantees will work at elevations up to 8,000 feet, the Lotus Citadel Flat Flame 3 offers a lightweight metal housing that features a visible fuel window, push-button ignition, and a fold out cigar punch on the base. It measures 3 1/8″ x 1 3/8″ x 3/4″, a size that makes it both pocket-friendly and easy to store in most travel humidors, while its hefty weight of 4.1-ounces (114g) gives it a real presence in the hand. 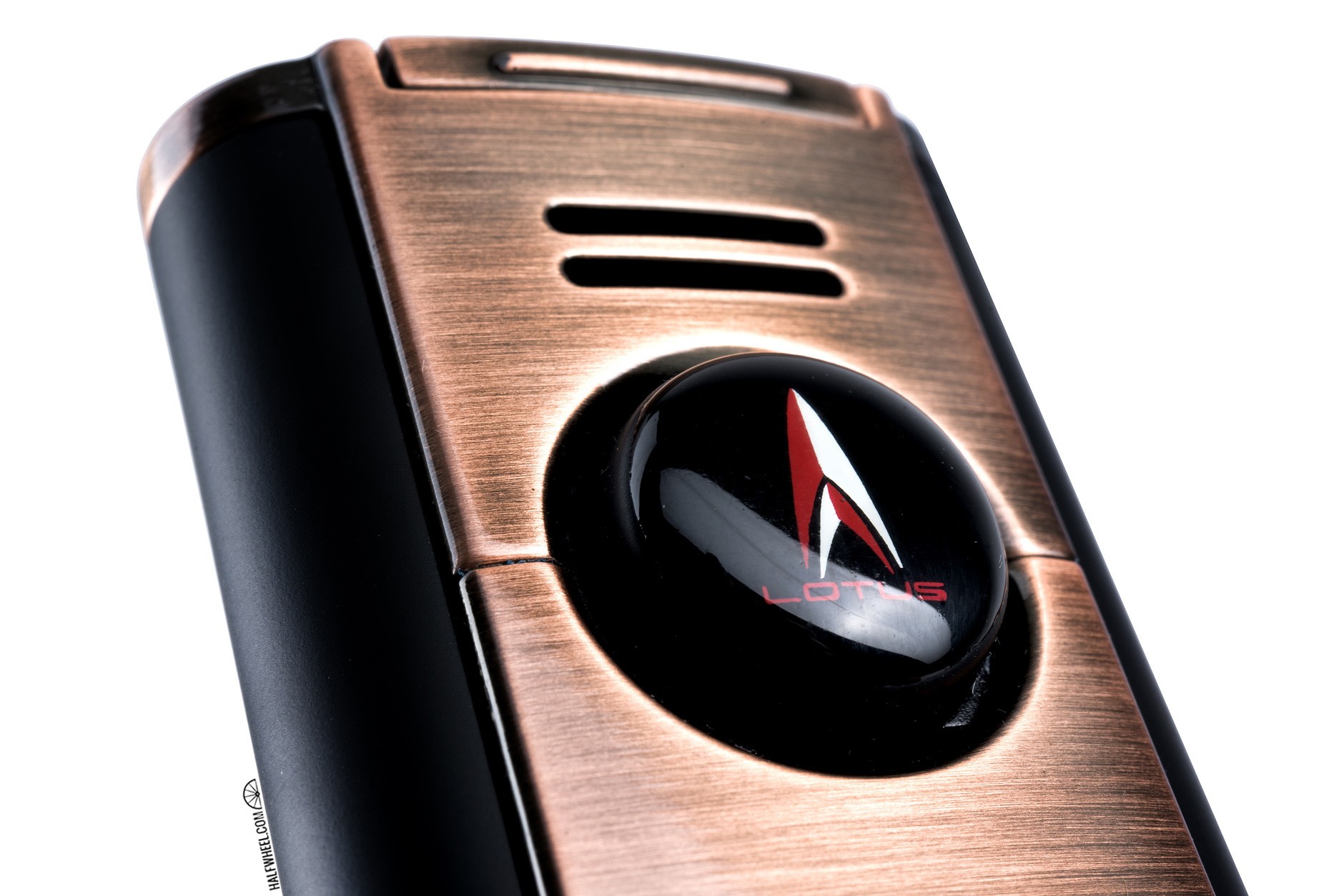 In terms of usage, the Lotus Citadel Flat Flame 3 is fairly straightforward; if anything, the fact that it’s not a single action ignition and requires the lid to be opened manually is the common stumbling point I saw when inviting friends to try it out. I’ve come to appreciate the manual lid aspect of lighters, as I’ve seen a few single-actions wear down the bit that holds the lid in place, rendering the benefit effectively useless.

Flipping open the lid provides a distinctive sound, as there seems to be a tightly pulled spring waiting to pull the metal flap back. While it’s not the signature ping of S.T.Dupont, it is impressive in its own right. The lid flips back to just shy of being perpendicular to the flame and well out of the way, meaning there should be no impedance to lighting a cigar. 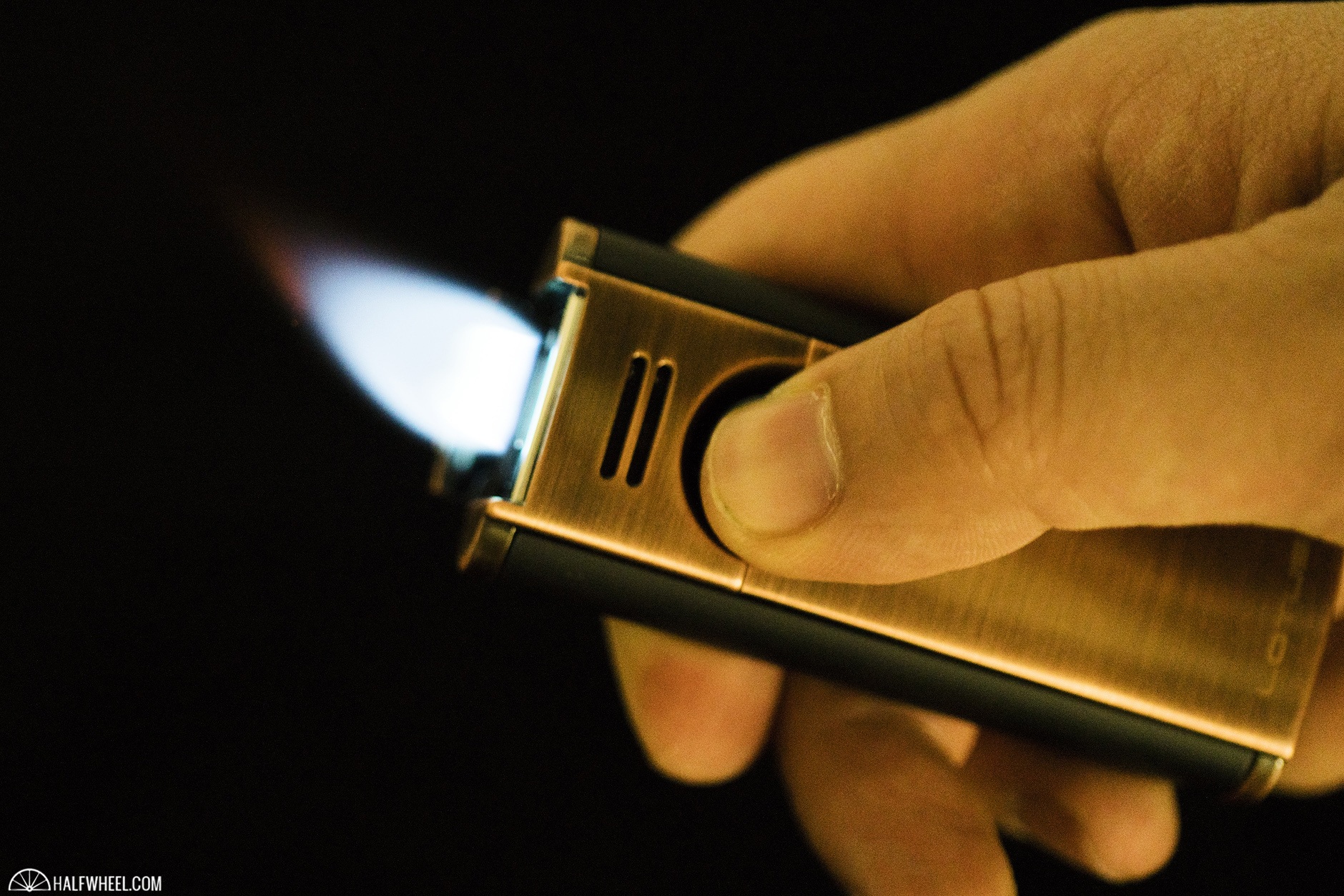 Once the lid is opened, a simple push of the sizable black button with the Lotus logo on it gets the fuel flowing and ignited, though even though with a pair of decent sized air intake vents helping things, it may not always appear to be the case. While I don’t recall having a single failed ignition, there were numerous times where both I and friends who used the lighter weren’t sure if it was actually lit. The reason is seemingly two-fold: first the lighter seems fairly quiet; second, fanning the flame out makes it harder to see except at its base. At the setting I had flame at, I found that other than about three or four millimeters above the slot, the Lotus Citadel Flat Flame 3’s flame is near invisible unless you are in a completely dark room, and the brighter the area you’re in, the harder it is to see.

That is, until you start lighting a cigar. 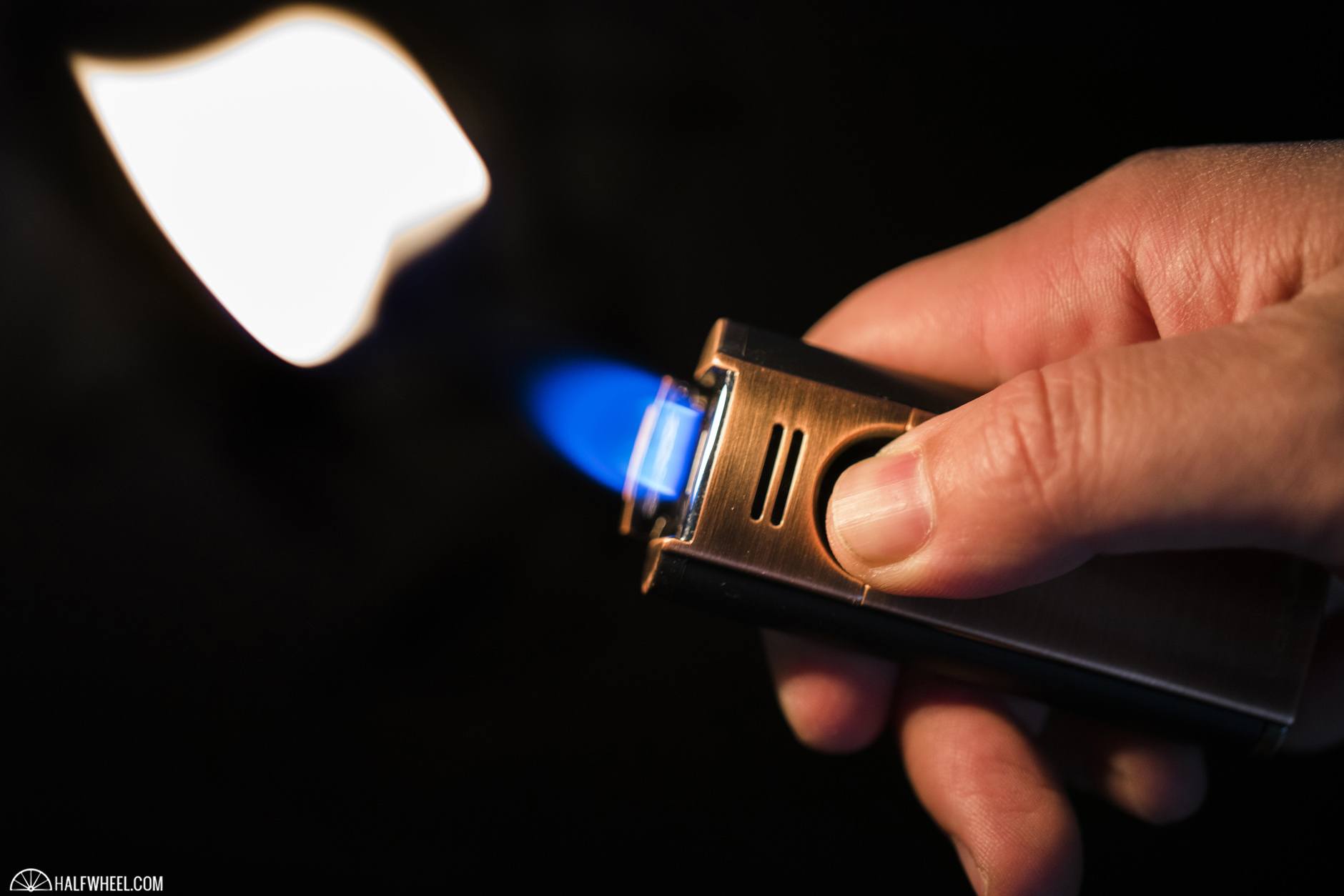 While I like a lot about the Lotus Citadel Flat Flame 3, one thing I found myself constantly getting fascinated by was how well it handled large ring gauge cigars. The process of lighting a cigar with at least a 50 ring gauge is where this lighter shines, as you see the foot of a cigar turn from brown to orange in wide, even strips, as opposed to the quick change to a glowing, bright orange that generally happens with traditional torches, regardless of how many jets are present.

This leads to one of the issues I found with the Lotus Citadel Flat Flame 3, and that is that even though it is a single flame lighter, it seems to produce a bit too much flame for cigars under 50 ring gauge. It’s not to say it can’t be used on lanceros and lonsdales, but when fanned out the flame is wider than most slender cigars, which if the user isn’t careful can result in the sides of the cigar being scorched.

The flame can be tamed by way of a typical flame adjustment mechanism on the lighter’s underside, though unlike some of the newer lighters on the market that offer tool-free adjustment, you will need a screwdriver or other flat surface to do so. As noted above, I found the flame to be most effective when the adjuster is about halfway open or even a tick under, as the more open it is, the more unwieldy the flame becomes. It does become more visible however, taking on a W-shape as it grows taller and louder. Crank the adjuster to its most open point and the Citadel won’t ignite, though you will see a small geyser of butane spewing out.

That interesting feature is among the few issues I had with the Lotus Citadel Flat Flame 3, the other only notable one being a bit of play—call it wobbliness if you want—from the ignition button, though that has not impacted the lighter’s day-to-day performance. 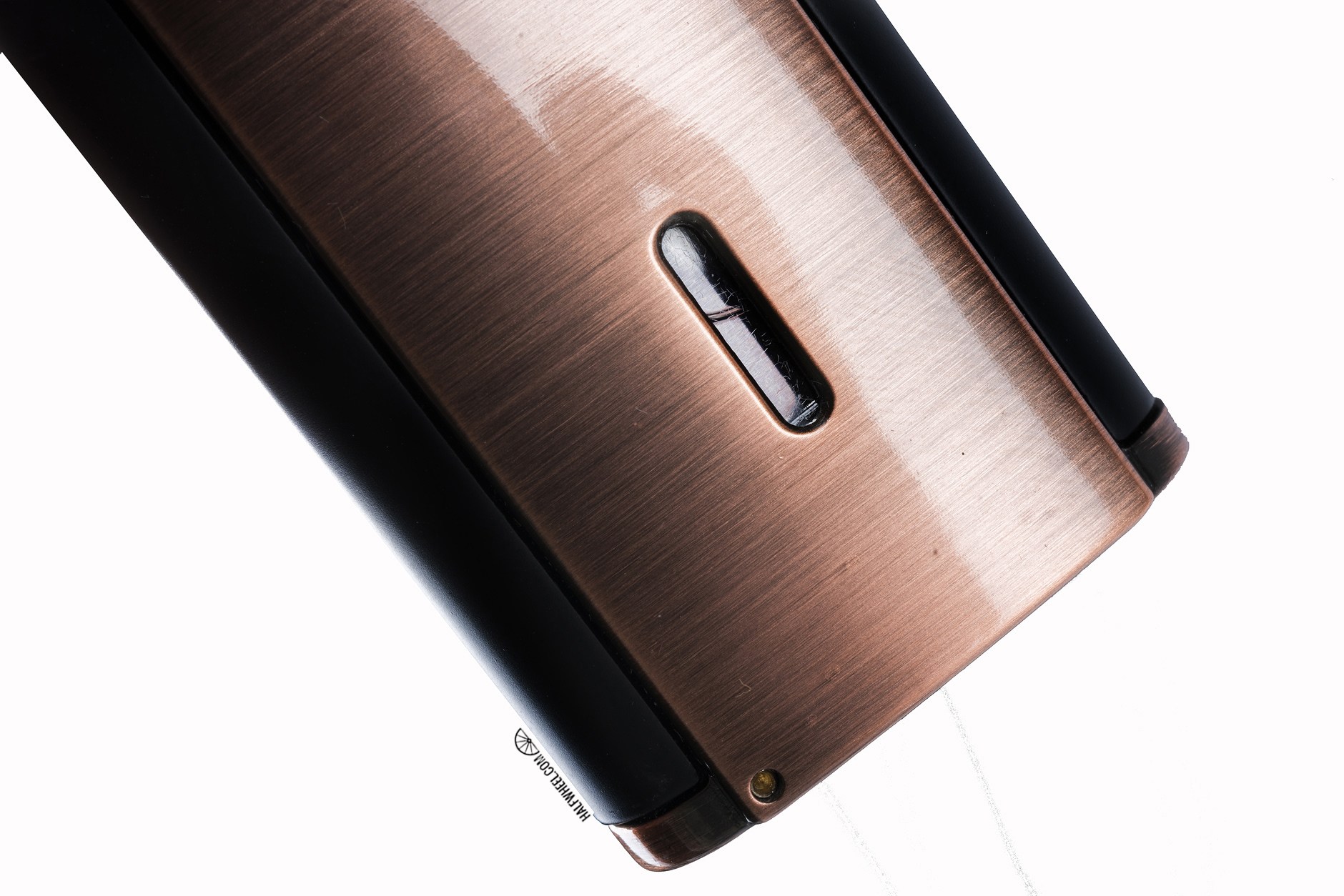 Speaking of butane, the Lotus Citadel Flat Flame 3 isn’t marketed as having a sizable fuel tank, though I found it to be more than capable of handling several cigars, with refilling done by flipping open the punch cutter to reveal a standard valve. What I am intrigued by is whether there is a dual chambered tank in the lighter, as I had several instances where I’d flip the lighter upside down and it would come back with different fuel levels visible. The way it behaved reminded me of what you’d see on a clear Bic lighter as opposed to most of the other lighters I have used. 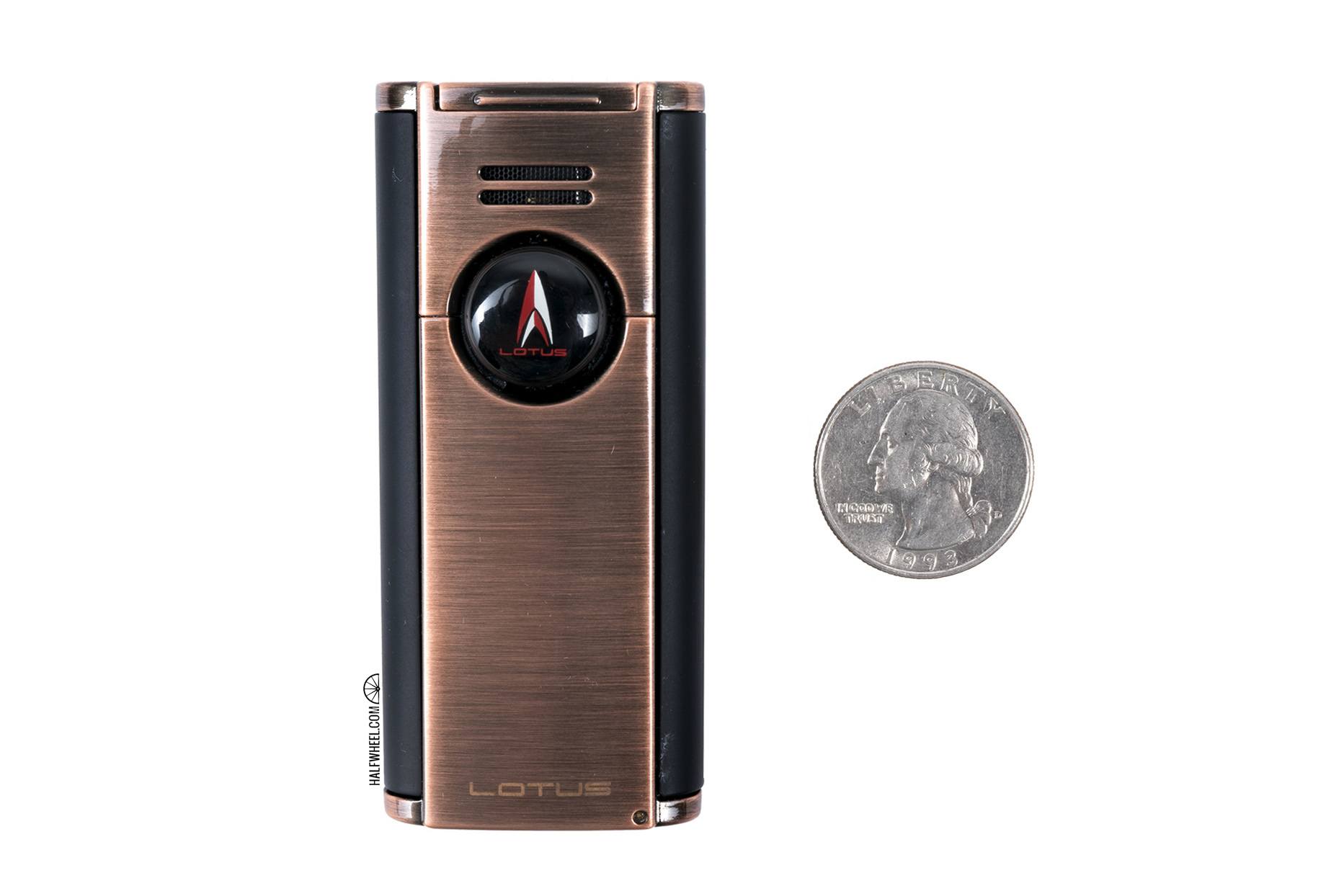 The Lotus Citadel Flat Flame 3 comes in five finishes: black matte, black matte and red, black matte and blue, brushed chrome and black matte, and brushed copper and black matte. The lighter that was used for this review had the brushed copper finish, and while the front of it looks fine, the backside has picked up a few scratches and wear marks, enough that it looks markedly more worn than the front, top or sides of the lighter, while the base shows a bit less wear in terms of quantity, but the marks it has are much the same. The ignition button has also begun to show some slight scratches and wear.

It wouldn’t be a complete review without talking about the price of the Lotus Citadel Flat Flame 3: a potentially eye-popping $120. Even though this sits in the higher-end Lotus portfolio and comes with a two-year limited warranty, it still feels a bit high in comparison to the rest of the brand’s offerings and what other companies on the market, and it certainly generated some pause when I told others the MSRP.

That said, there was at least some willingness to consider it, which is how I feel about it. Yes, it’s a decent amount of money, but the Lotus Citadel Flat Flame 3 pleads a solid case at nearly every turn. It’s easy to use, dependable and distinctive, both for its flat flame and a push-button ignition that is something not found on most lighters in this format. Yet with the finish starting to wear down just a bit, I’m concerned that it won’t be long before the lighter looks less like something with a three-digit price tag and more like something that got pulled out of a box of other lighters.