At the 2013 IPCPR trade show, L’Atelier Imports offered retailers a reward for showing up–the L’Atelier Extension de la Racine ER13. The Racine, which is said to be an annual item for those in attendance, debuted in a form based off the Cohiba Siglo VI, measuring 5 7/8 x 52. Product was limited based on the orders, very similar to how Pete Johnson, one of the company’s co-foudners, had handled Tatuaje TAA releases.

The company has still declined to disclose production numbers, but it is over 150 boxes of 20. L’Atelier began shipping the cigars in September and they have slowly been emerging in more and more markets as the months have gone on. The cigar uses a Nicaraguan sun grown criollo wrapper with Nicaraguan fillers, including the Sancti Spiritus tobacco.

Brooks Whittington photographed the cigar while at the trade show: 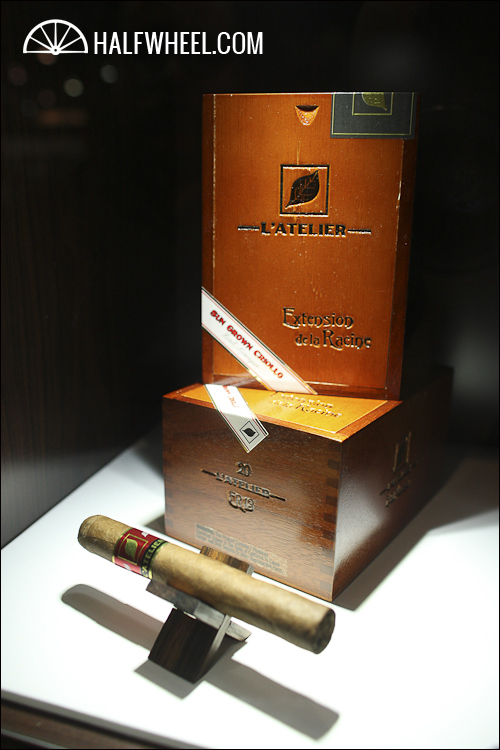 I really like the way the wrapper and band work together; there’s only a few veins on the sun grown tobacco and the band really seems to pop with the red background. Once the cigar is out of the cellophane I get very pronounced cedar, leather and some creaminess and orange notes from the foot. The cold draw of the ER13 presents a familiar cedar, some spices and rotting orange with a velvet texture that registers as full.

The first third of the Racine starts full with some toastiness, sweet grass and cedar. It’s crisp, refined and is complimented well by the finish. While the cigar is most certainly full, it avoids being in your face. Progressing through, the draw opens up featuring some burnt floral notes, coffee and a similar flavor to that from the start. Through the nose I get some spice, but it’s the only place the sensation can be found on what is otherwise a pretty sweet cigar. Strength-wise, the Racine sits somewhere around medium-full to full, definitely not masked, but restrained.

There’s an uptick in refinement for the second third of the Extension de la Racine. It’s not to say that the first third was bad, simply that things get better with toasty notes, charred wood, cocoa and touches of cotton candy. I can still pick up both floral and creamy notes, but they are definitely losing weight within the profile. On the outside of the mouth, I’m beginning to notice a lingering harshness, which is odd. As for construction, the draw continues a slight pace of loosening, which is welcome. Elsewhere, my lighter hasn’t been touched since the cigar was lit.

As the Racine comes to an end I get burnt cherry on the retrohale, the second time I’m able to completely separate one of the flavors in the mouth. There’s also a generic meatiness that emerges, but it’s only when the rest of the flavors begin to recede to more of a medium-full mark. Towards the last inch, some hay emerges, definitely not one of the core flavors of the majority of the cigar, but an interesting way to end nonetheless.

The first edition of the Extension de la Racine is a good cigar. I’m really intrigued as to where the cigar will be in a year, because it would not shock me to see it only get better or for things to fall apart as the fullness disappears. Whether or not that happens is a question for a redux, as for where the cigars are right now, there’s little to complain about. I try at all cost to avoid making presumptions about cigars, but I will be honest, I had hoped for more complexity given how the cigar has been billed. Still, it’s a solid release anyway you try to describe it and I’ll definitely being enjoy more in the future.