The cigar was released to rave reviews and high ratings, and follow it up, this year Gomez has extended the line by releasing the Salomon with an Ecuadorian habano maduro wrapper. It’s still everything Salomon but with a dark, intimidating maduro wrapper that people have come to love in many of Gomez’s cigars.

Here is a comparison photo of the two LFD Salomon releases, Maduro on the left, Natural on the right: 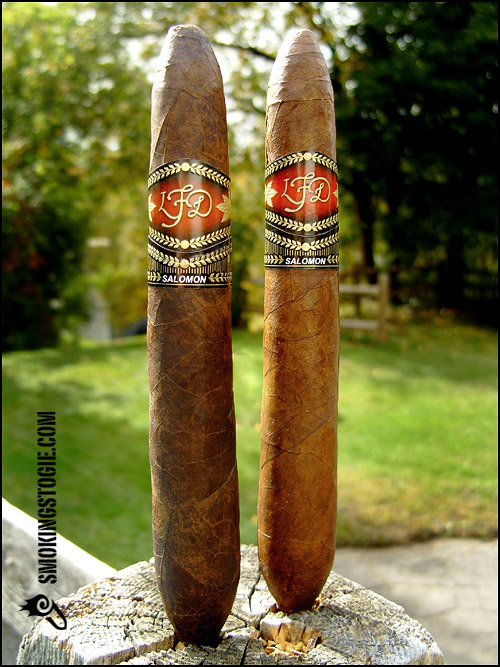 This cigar is massive, if you have seen the natural version you know what I am talking about. Somehow, the maduro version seems to be even larger looking. The wrapper is noticeably darker and just overall beefy looking. It has a splotchy maduro wrapper with minimal veins and a seamless appearance. It smells of leather, chocolate and coffee. Cold draw is chocolate, wood and cinnamon. A very hearty start to say the least.

Starting off in the first third the cigar takes awhile to get going I am forced to puff rapidly to get it lit. After about five minutes the cigar gets going and I am able to detect some flavors. It’s a very strong opening right away I am getting a ton of leather, coffee, a touch of roasted nuts and some black cherry through the nose. It isn’t a very spicy smoke right now but I am getting a nice pepper kick on the tongue with a long finish. The second third is dominated by a in your face coffee flavor, specifically just roasted coffee beans. There is also a sweet leather undertone floating in and out as I puff as well as that nice black cherry note through the nose. The nut flavor has disappeared but the pepper has ramped up a ton. I can feel it wash all over my tongue and trickle down my throat through the finish.

Finishing up in the final third the cigar is still going strong. Loads of coffee, leather, black cherry and the pepper is still in full force. There is now a wonderful chocolate sweetness underneath it all that is balancing out everything. The finish is long and cool and the flavors are crisp and clean. The strength of this cigar is really hitting me at the end. I am getting all kinds of sweaty and shaky. This is definitely a stick you want to smoke on a full stomach. I enjoyed this cigar. I am always going to be a bit biased when it comes to anything Litto Gomez makes because I have been a fan of his for years. This cigar had a solid profile with large, meaty flavors and a finish that went on for days. It switched up just enough each third to keep things interesting. The only negative was the performance, but I am hoping this was just a fluke, and although I have heard this is a common problem with the natural version as well, I haven’t experienced it. I will definitely be grabbing a few of these to age and see how they progress, as La Flor Dominicana sticks always seem to do better with some age anyway.