Just over a decade ago, Litto Gomez introduced a new cigar to the world, but it didn’t come bearing the name La Flor Dominicana, at least not exactly.

In the summer of 2006, Gomez released Coronado by La Flor Dominicana, choosing to promote the Coronado name more than that it was a La Flor Dominicana release. It was a full and powerful blend, offering complexity and flavor with a reasonable price that seemed destined to find a fan base. While it did, the lack of the familiar LFD word mark on the band proved to be a significant downfall, and even though the cigar often sat right next to other LFD creations, the connection never seemed to solidify itself. In November 2013, La Flor Dominicana discontinued Coronado along with 28 other products.

While it appeared that Coronado might be relegated to history books and personal humidors, La Flor Dominicana decided to bring it back, making the announcement of its return in July 2015 and showing it off later that month at the 2015 IPCPR Convention & Trade Show with its new name, the La Flor Dominicana Coronado.

The blend stayed the same as the original, at least as much as one blend can stay the same, using a Nicaraguan sun grown habano wrapper with the binder and filler coming completely from the Estancia La Flor de Palma in La Canela, Dominican Republic.

Here’s what I said about the La Flor Dominicana Coronado Toro when I reviewed it in November 2015:

Is it fair to say that Coronado is back? Absolutely. While it’s almost impossible to compare it head-to-head to the previous version that has been unavailable for nearly two years, this rebranded version certainly reminds me quite a bit of its predecessor: tons of pepper but with a lighter profile than what I think of the Ligero and Double Ligero lines offering. The construction was flawless and while there’s a bit of harshness in the final third, balance is rarely an issue. Can a band and some new packaging keep the La Flor Dominicana Coronado around this time? Hopefully, because underneath it there is little lacking for lovers of full-bodied cigars.

The first thing that strikes me about the Coronado is that the wrapper appears much more red than I remember it, though I will admit that memory isn’t particularly strong. For whatever reason my eyes don’t seem to pick out reds terribly well in wrappers, but this one is unmistakable as the color is almost clay like and reminds me of a stack of red bricks. The roll is firm and even, a near perfect cylinder of tobacco that has a slightly velvety feel to the fingers, no prominent veins or tooth and is capped well at the head. The foot is fragrant with green grapes, peaches and apricots, almost a fruit cup but without the overt sweetness from the syrup. There’s just a faint touch of pepper in the nose, and what is there doesn’t manifest until a few seconds after the initial whiff. Air flows well in the cold draw while the flavors are fairly subdued; I find some teriyaki beef jerky, dry but still sweet, and again only a faint hint of pepper that is reluctant at best.

The first puffs are quite complex and sophisticated, eschewing outright strength for vey subtle pepper that gets wrapped in a clay-saturated earth note that is quite enjoyable through the nose as well. The first clump of ash drops off disappointingly early; not too long after the picture was taken, in fact. The pepper becomes more forward on the tongue and starts to challenge the earth for dominance, while the teriyaki beef jerky note I found on the cold draw begins to make its way into the profile as well. While the cigar doesn’t have an overall burn issue, it does run into a spot on the wrapper that just doesn’t want to combust and as such the burn line has to find a way around it, which it does on its quest to stay straight and even. While it’s not an outright flavor or aroma, I also begin to pick up some cured salami as well, a flavor that I absolutely love despite not having had it for some time. The second clump of ash departs as unceremoniously as the first, making it an 0-for-2 first half of ash in the ashtray. 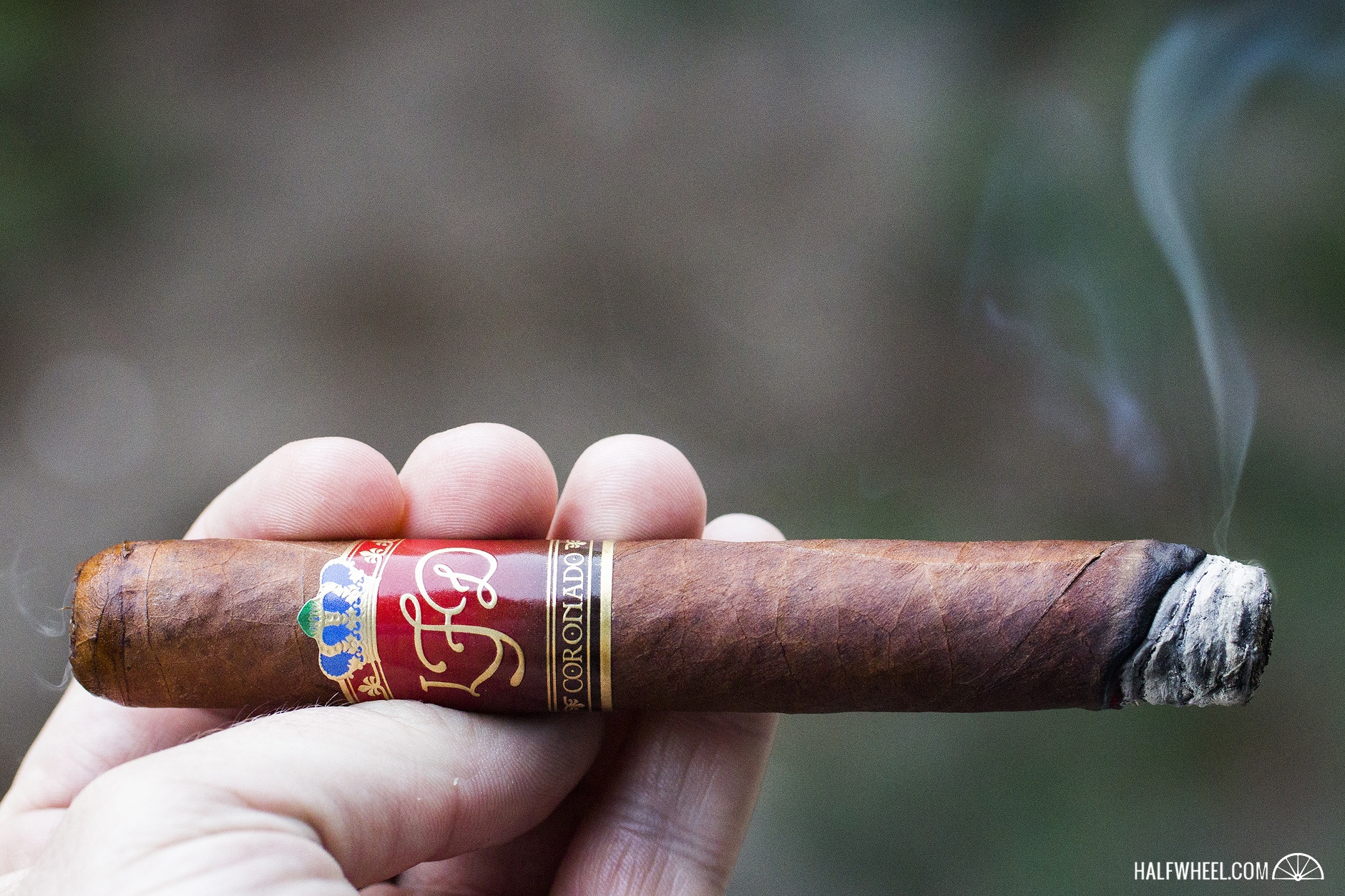 The start of the second half sees the pepper become much more outgoing, greeting the palate as opposed to being introduced by the other flavors as it was throughout much of the first half. Chocolate comes into the aroma shortly after, first as a bit of baking chocolate before evolving into a bit of Mexican hot chocolate, complete with a sweet and spicy aroma. The pepper shines brightly through the nose, packing characteristics of both the white and black varieties. The burn rate slows to a near crawl ahead of the band needing to come off, a pace that will be familiar to regular LFD smokers, with the flavor creeping closer to full-bodied territory thanks to more pepper and nicotine. Another incombustible spot appears in the wrapper with two inches to go, though the burn line continues to soldier on evenly otherwise. The draw also appears to be a touch firmer in the final inches, and another clump of ash misses the ashtray, giving the cigar a 1-for-4 performance in that department. Some cool peppermint comes in to close things out after just over two hours of very enjoyable smoking time.

Almost exactly one year since I first smoked the re-released La Flor Dominicana Coronado Toro and declared that the blend was indeed back, I stand by that declaration with even more appreciation for the cigar. Time has made it a bit more graceful now than it was originally, but it has not allowed the blend to lighten up on its stronger parts, notably the constant pepper that accents the first half and defines the bulk of the second half. The burn issues with the wrapper seem to be an anomaly but something to be mindful of, thankfully it doesn't detract from the cigar's overall offering. A year later and I'm still glad that the Coronado blend has been salvaged from the annals of history.