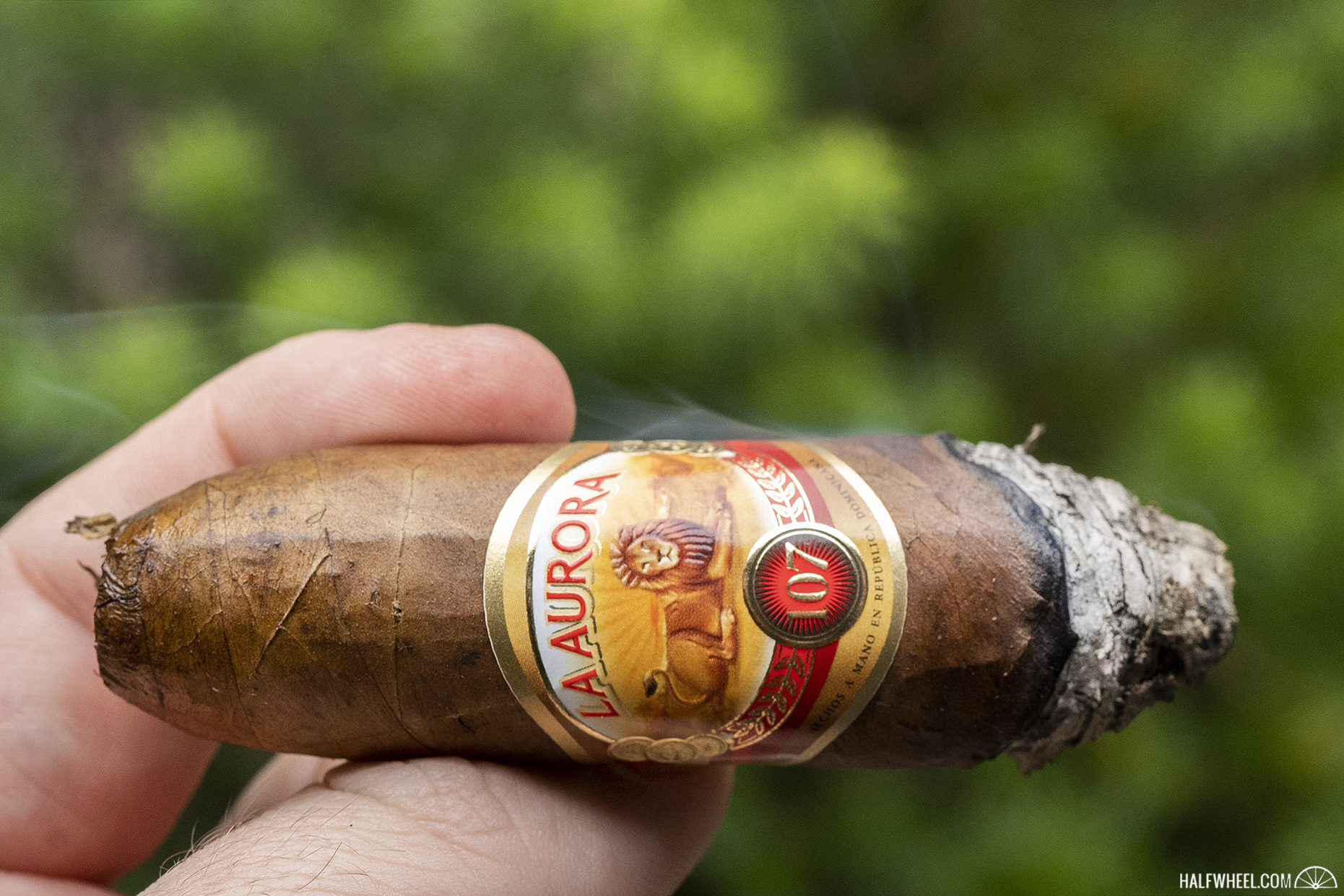 If you’re just looking at the pictures of this review, it’s pretty inevitable to see where the conversation about this cigar will start. But let’s save that for a moment.

The La Aurora 107 Zeppelin is a size that has been available since 2018, debuting in China before heading to Spain in 2019, shortly before the start of the IPCPR Convention & Trade Show, where it made its stateside debut. Like the rest of the line—which now numbers 10 vitolas—the blend is highlighted by an Ecuadorian Sumatra wrapper over a Dominican binder and fillers from Brazil, the Dominican Republic, Nicaragua and Peru.

The cigar’s name, Zeppelin, is fitting given its shape, as a zeppelin is a type of rigid airship named after Ferdinand von Zeppelin, a German Count who was one of the innovators of these type of flying grafts in the early 20th century, though his first work on the project dates back to 1874. They were quite popular in the first decades of the 1900s, until the Hindenburg disaster in 1937, which along with other issues, brought an untimely end to their development and use, however there has been a bit of a renaissance thanks to Zeppelin Luftschifftechnik and its Zeppelin NT (new technology) airships. Goodyear, which is well known for its signature blimps, announced that it would be replacing its fleet with Zeppelin NTs.

Now we can all collectively say it, this looks a lot like the Flying Pig, a vitola made popular over the past decade or so by Drew Estate. However, the size has much longer historical roots. In fact, it goes back to the last 1800s, at least as Steve Saka shared when the Flying Pig began arriving on the market by way of a Liga Privada guide he created:

It was a cigar shape (vitola) I saw in an 1895 clear-havana Tampa-based factory’s cigar sample catalog that was printed to facilitate their salesmen in taking production orders from tobacconists, drugstores, restaurants, etc. Back then there weren’t brands so much as there were factories from which a retailer would order a thousand of this cigar and a thousand of that cigar to which would be affixed a privately banded ring.

Fwiw, I believe under the Dunhill marquee a very similar shape with the same name was made in Havana in the 1940’s, but they were not the first to make it. Given its amazing success, I expect others will copy it soon. 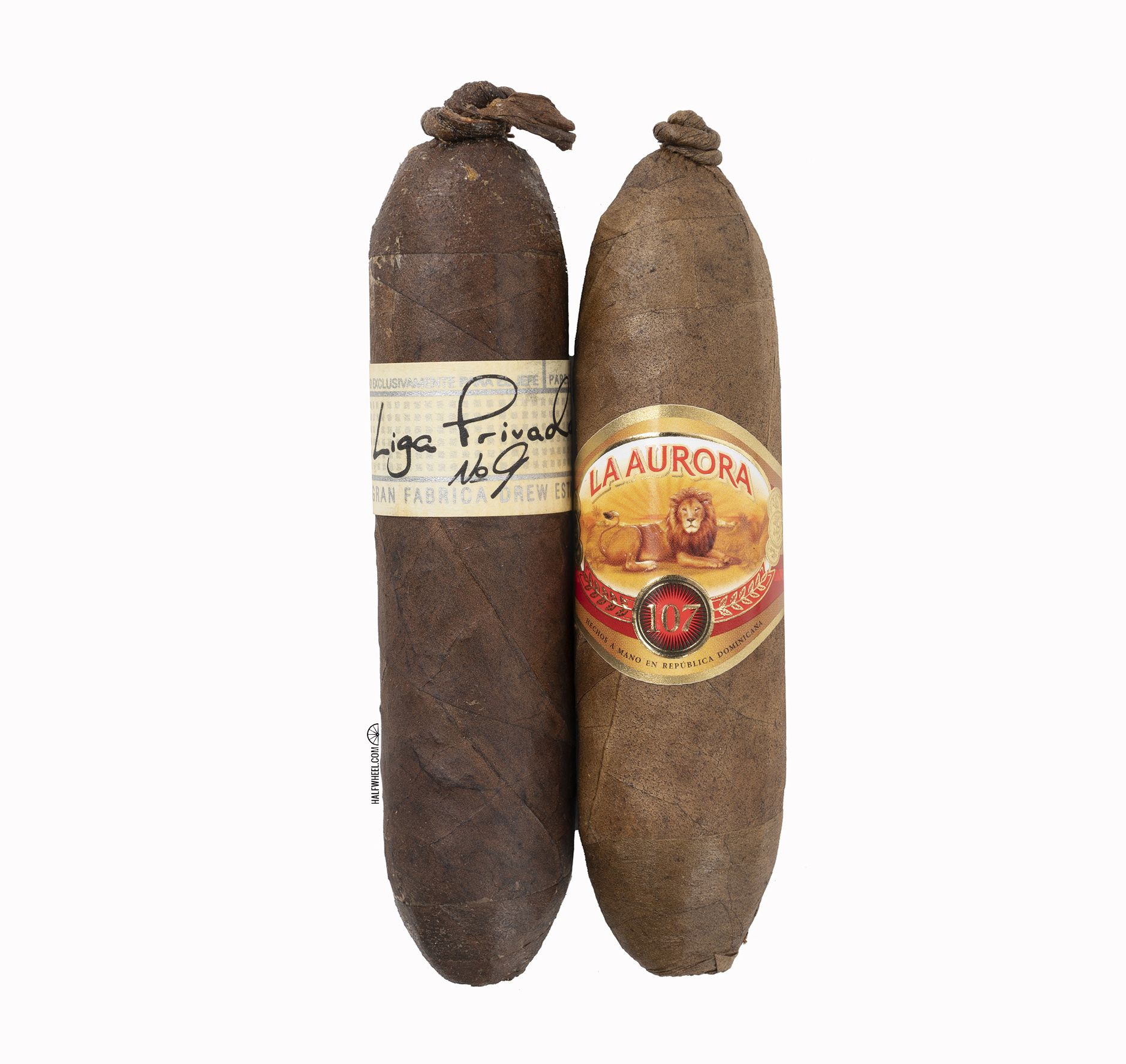 The Zeppelin isn’t quite the same size as the Flying Pig, as the former measures 4 x 58 and the latter measures 4 1/2 x 60, but there is an undeniable resemblance between the two, even with the Zeppelin’s more tapered head and foot.

Coinciding with the launch of the La Aurora 107 Zeppelin, the entire La Aurora 107 line received a packaging update, complete with new bands that focus on the full body of the company’s lion logo instead of just the head, which had been used on the previous designs. 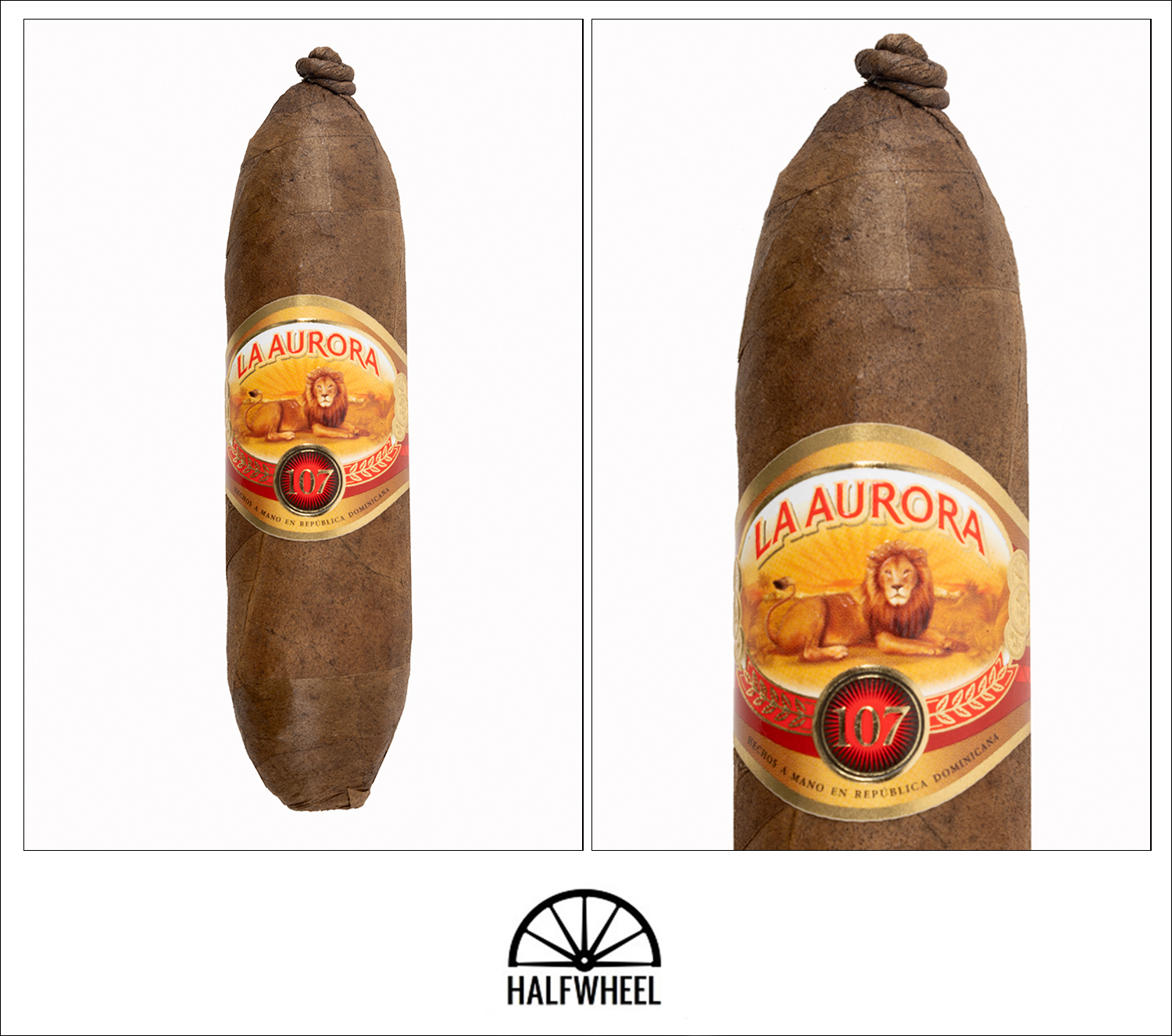 Say it with me, this looks a lot like a Flying Pig. Now that we’ve gotten out of the way, the cigar is still a distinctive vitola, short, thick and tapered at both ends with the head a tightly twisted and coiled strip of tobacco as a finishing flourish. The wrapper shows the coloration I would expect from an Ecuadorian Sumatra leaf, mottled in places with a medium, nutty shade of brown and a few dark patches in spots. The veins are small and while the leaf has a matte finish, I can still feel some of its oils on my fingers. If anything, it looks like the wrapper leaf was tugged and stretched near the foot to make the leaf look like it isn’t lying perfectly flat on the binder. It’s understandable near the head of the cigar, but at the foot it looks a bit odd. It’s a firmly rolled cigar with little give, nearly rock hard at times, and other than my notes about how the leaf sits near the ends, is very well-rolled with flat seams and well constructed heads. The fairly small opening at the foot of the cigar has a light and sweet aroma, initially reminding me of a freshly opened jar of peanut butter before picking up a bit more of a fruit cup note with touches of light honey and just a sprinkling of light pepper. The cold draw can be a bit more open than I would prefer, air moves with varying amounts of restriction, offering flavors of Ritz crackers and various bread crusts with little pepper or sweetness present consistently, but more of the honey note when it does show up.

Out of the gate, the La Aurora 107 Zeppelin starts with a combination of mixed nuts, dry woods and black pepper, with a bit of dry earth bringing up the rear and leaving the majority of the finish on my tongue. A lighter white pepper also makes an appearance, as does the occasional bit of chalk, which doesn’t add much to the finish.There is a very enjoyable black pepper sensation through the nose, softened a bit by the texture of the smoke more than any complementary aromas, which in turns for full retrohales without adverse effects. The second sample is slow to shed the sourness with which it started, and the difference between it and the first sample is stark at times. My attempt to get a photo of a long stack of ash appears to have slowed the burn rate to an absolute crawl, as I find myself having to slowly puff on the cigar to get smoke production ramped back up, but when it does, still manages to put off a fairly good amount. It’s a problem not experienced when I’m more liberal with the ash taps. The draw is good and while the burn line isn’t perfectly even, it’s not of much concern yet.

As the burn line somewhat begrudgingly moves into the second third, the La Aurora 107 Zeppelin stays toasty with a bit of pepper accenting the flavor, the result of which can get suggest a bit of char at times but never fully moves into that term. The second sample still can’t shake the sourness it holds, and each puffs deposits a less than enjoyable flavor at the curve of my throat. After knocking off the ash on the first sample, the cigar’s combustion ramps right back up to normal, and there’s no problem advancing the burn line and getting smoke to almost pour out of the end. By the midpoint, the profile shows good complexity and balance—more the former the latter across the three samples—mixing roasted nuts, earth, pepper, and some tangy woods to really give the taste buds something to process. Retrohales are still clean if a tick or two punchier thanks to more black pepper in the mix, but there is nothing stopping them from being thoroughly enjoyed. There is definitely more of a charred flavor coming from the La Aurora 107 Zeppelin as it enters its final third; the pepper becomes the leading driver of the change, turning sharper and more pointed than how it hit the palate earlier. What catches me off-guard is some new found sweetness; the cigar hasn’t exhibited much of it yet now I get subtle amounts of honey and sweet cedar beginning to emerge, almost a light glaze on what has remained an otherwise consistent profile since the midway point. While the vitola has not felt too awkward up to this point, as the end of the cigar appears on the horizon, getting a comfortable hold on it becomes a bit more of a challenge, and I’d be inclined to say that having a draw poker or such tool would come in handy in order to smoke this farther down than simply by holding it with your fingers. More flavors of roasted nuts, pepper, dry earth and a general toastiness bring the cigar to its conclusion, with a decent amount of that flavor sticking around on the tongue after the cigar has been put down. The draw, burn and smoke production all continue to be very good, and if care is taken to light the cigar evenly, the lighter shouldn’t be needed again. Since its debut back in 2010, I've always had a bit of a soft spot for the La Aurora 107, both for being a really good blend and for the lancero that came out just as I was really starting to get into the cigar industry on a professional basis. Almost a decade later, it's exciting to see that the line is still around and not only being enjoyed, but adding new sizes in an era where it seems like brands come and go. As for the Zeppelin vitola, it is almost the antithesis of the lancero that I remember so fondly, yet also comes in a vitola of which I also have fond memories. Yet when those two things met, the result wasn't quite as favorable as I had hoped; the ratios seemed to put the wrapper into the background and focused more on the filler blend, which while good, does become a bit much for my palate at times. There is complexity and balance, though the latter is the more questionable of the two adjectives in this instance. After three, I'm left more reminiscing about the blend when it was new than truly enjoying this latest addition, which while good, doesn't seem like what a cigar should ultimately deliver. For something new and novel, the La Aurora 107 Zeppelin is an enjoyable experience, but I'd still reach for those more slender vitolas with which to enjoy these tobaccos.