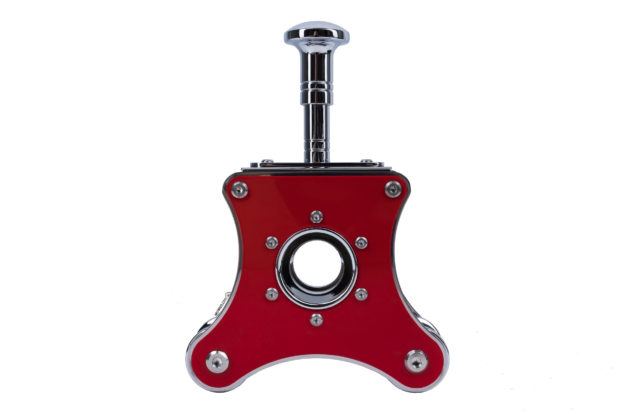 During the 2016 IPCPR Convention & Trade Show, JetLine showed off a brand new table-top cutter that featured a two-point base, a guillotine blade made of surgical steel and all-metal construction.

Named Baron, the cutter comes in two different finishes, both of which carry the same $279.99 MSRP: red with silver accents and black with silver accents. Regardless of color, each of the cutters come packaged in a large box with a foam interior, meaning that it does not shift around at all during shipping. According to the company, the Baron can cut cigars up to 60 ring gauge, a claim that I tested and found to be correct. 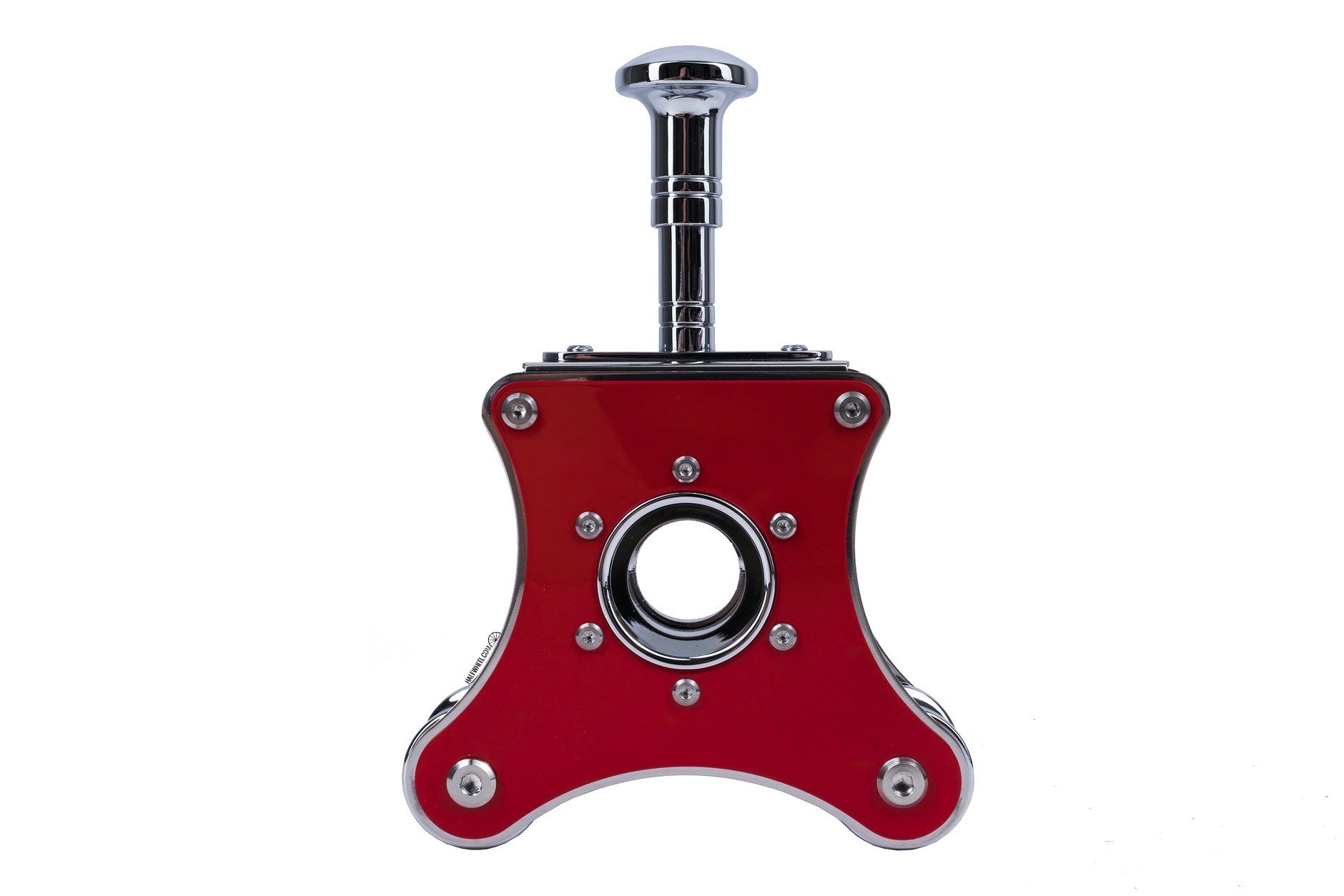 Visually, this is easily one of the most attractive looking tabletop cutters I have ever seen: the curved design is quite unique and instantly catches your eye, while the glossy candy apple red plates on the front and back along with silver accents on the sides, bottom and plunger make for a great color combination. The cutter is quite heavy—in fact, when we weighed it came in at exactly 1000 grams, or just over 2.2 pounds—but seems to be balanced nicely, and there was never a time while cutting a cigar that I thought it would tip over one way or the other.

Being a guillotine cutter, the operation is fairly straightforward: put the end of the cigar you are trying to cut into the opening of the cutter, then push down firmly on the plunger, which causes the blade to descend and cut through the cap. The blade halts when it comes to the end of the track—the plunger is all the way down at this point—so when you let it go, the plunger ascends again until the opening is clear and the blade is back inside the housing of the cutter.

The problems start as I put the end of the cigar I am trying to cut into the opening. It is then you will realize that no matter how hard you try, there is no way for you to visually judge how much of the cap is going to be cut off, as the sides of the cutter block any effort to view it. This not only means that I am unable to have any control over the depth of the cut, but also the angle the cap is being cut at. I was able to get around this issue—somewhat—by basically putting the blade slowly against the cap at certain points until I could estimate amount I wanted cut off, but the closest I ever got was an estimation. Unfortunately, after you jump that significant hurdle, you are not even close to finished with the issues. That is because the front and the back of the cutter look virtually identical, leading to confusion on which end is the one to actually put the cigar in. While that might not be a significant problem for some cutters, it is a major flaw in this cutter, as you get very different results depending on what which side you use. Immediately, I ran into issues. In fact, the cap of every single cigar that I cut on this side of the cutter was basically crushed, with the blade obviously not cutting all the way through the cap as expected. After inspecting the blade itself, I realized that it was not stationary in its track; in fact, it had quite a bit of movement back and forth. However, not even that should cause the destruction I was seeing, so I soldiered on, testing out holding the cigar in different ways, pushing the plunger softer or harder and cutting the caps further down on the cigar, none of which had any appreciable impact on the results.

After talking with Charlie about the issues I was having, he suggested cutting a cigar with the other side, something I had not really thought about doing due to the obvious physical feature that I assumed showed which side was the correct side to cut with. Here’s him trying to explain his theory:

My idea was to move the cigar to the opposite side so the fulcrum could be as close to the blade as possible, i.e. the cigar rests on cutter as close to where the blade is.

I suspect this does a variety of things, the largest of which is increases the stability in the cutting motion. The process of holding the cigar in place while also slamming a blade into it isn’t particularly great as your hands are not as stable as a permanent holder like vice grips. Furthermore, the fact that the blade itself has play makes the whole process worse.

Cutting with the other side of the cutter had an instant effect: while the cuts were not perfect by any means and the blade was still damaging the caps, the difference in the resulting cut was like night and day. Suddenly, I was getting usable cuts—albeit still not exactly where I wanted them, see above—as opposed to destroying the cigars.

However, that is not where the problems end, as the cutter has another flaw that has to be mentioned, namely that since there is no reservoir on the bottle of the cutter, the tobacco remnants have nowhere to go after you cut the caps of your cigars other than all over the surface the cutter is sitting on. In addition, there are a number of crevasses inside the cutter where small pieces of tobacco tend to collect, meaning that whenever you move the cutter, those small pieces fall out over and over again. While there are no cutters that come close to the combination of looks and build—other than the same cutter that is covered in different branding—the idea of a single-bladed tabletop guillotine cutter with a plunger is not exactly new. In fact, JetLine offers another cutter that features the same plunger mechanism, albeit in a different exterior, named the Ganon that is priced at $179.99. In addition, there is the Colibri Quasar, although it features both a straight blade and a v-cut blade and carries a price tag that is $155 less.

After using the Baron for over a month, I can tell you that while the JetLine Baron Table Top Cutter is visually impressive, unfortunately, that is essentially the best thing about it. It fails at its stated primary function. Not only are you literally unable to accurately judge how much of the cap you are cutting off, but if you do happen to get it where you want it by some miracle, you have a very good chance of busting the cap of the cigar. If you are looking for a pretty decoration to put on your desk or store counter that will get a multitude of comments, you have found it. If, however, you are looking for a tabletop cutter that actually performs its job, I would suggest you keep looking.