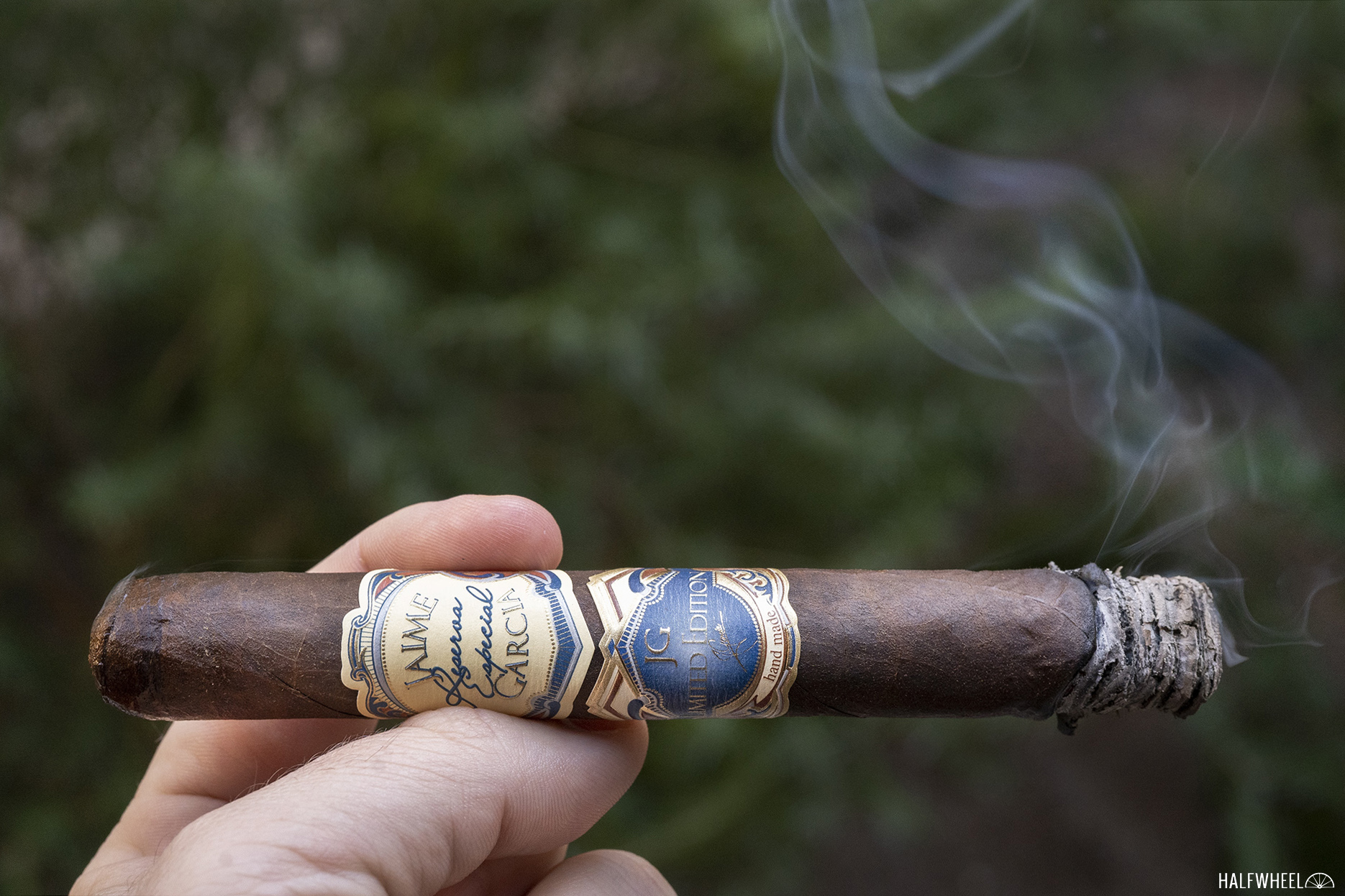 There’s a certain point where hearing about birthdays and anniversaries makes you realize that you’ve been around for a while.

In this case, it’s the 10th anniversary of the Jaime Garcia Reserva Especial, which is being commemorated with a limited edition cigar that was released in November 2019. While My Father hasn’t discussed the cigar much, the company did tell Cigar Aficionado that the cigar uses a tobacco not found in the original blend—pelo d’oro. 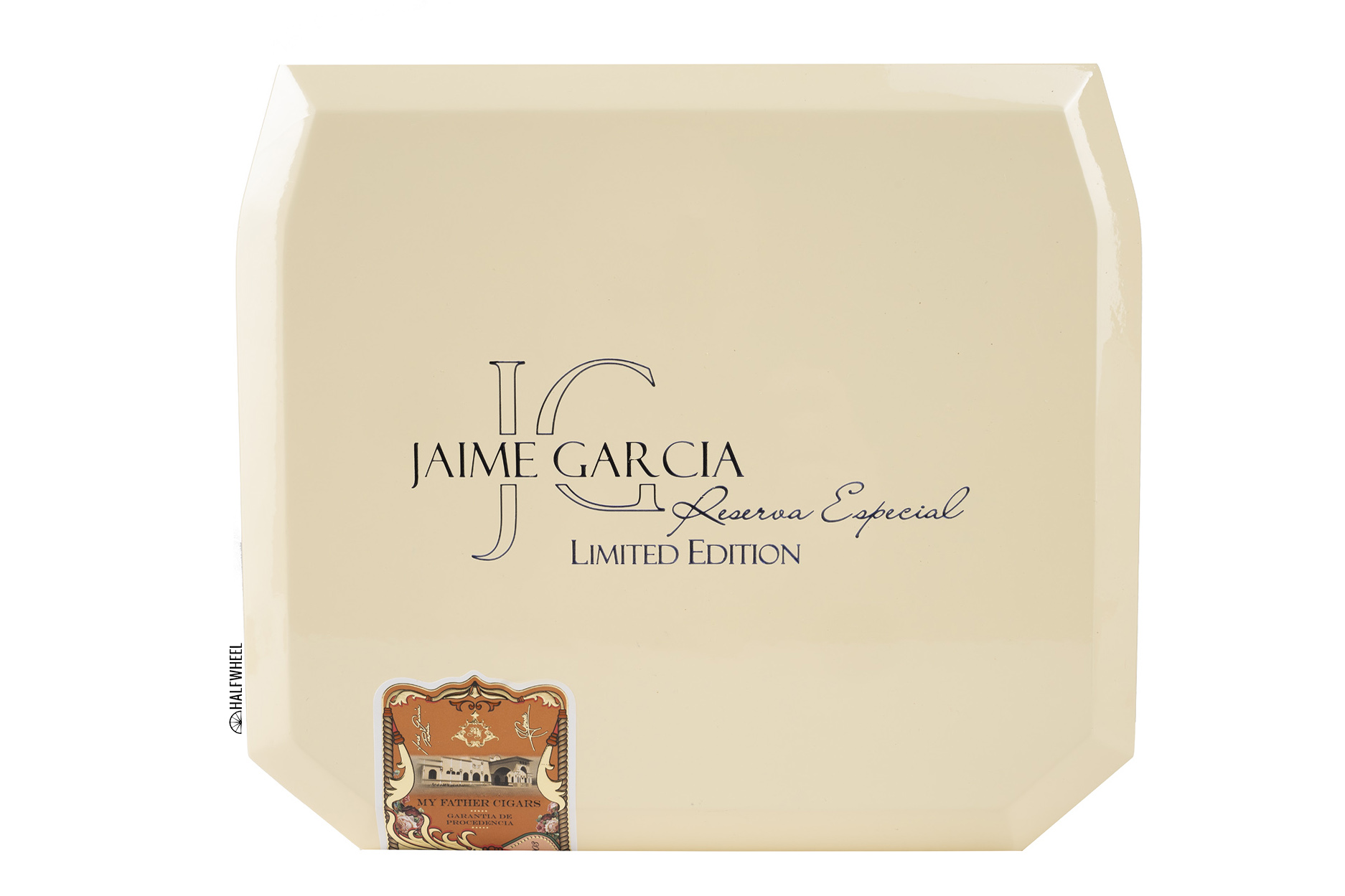 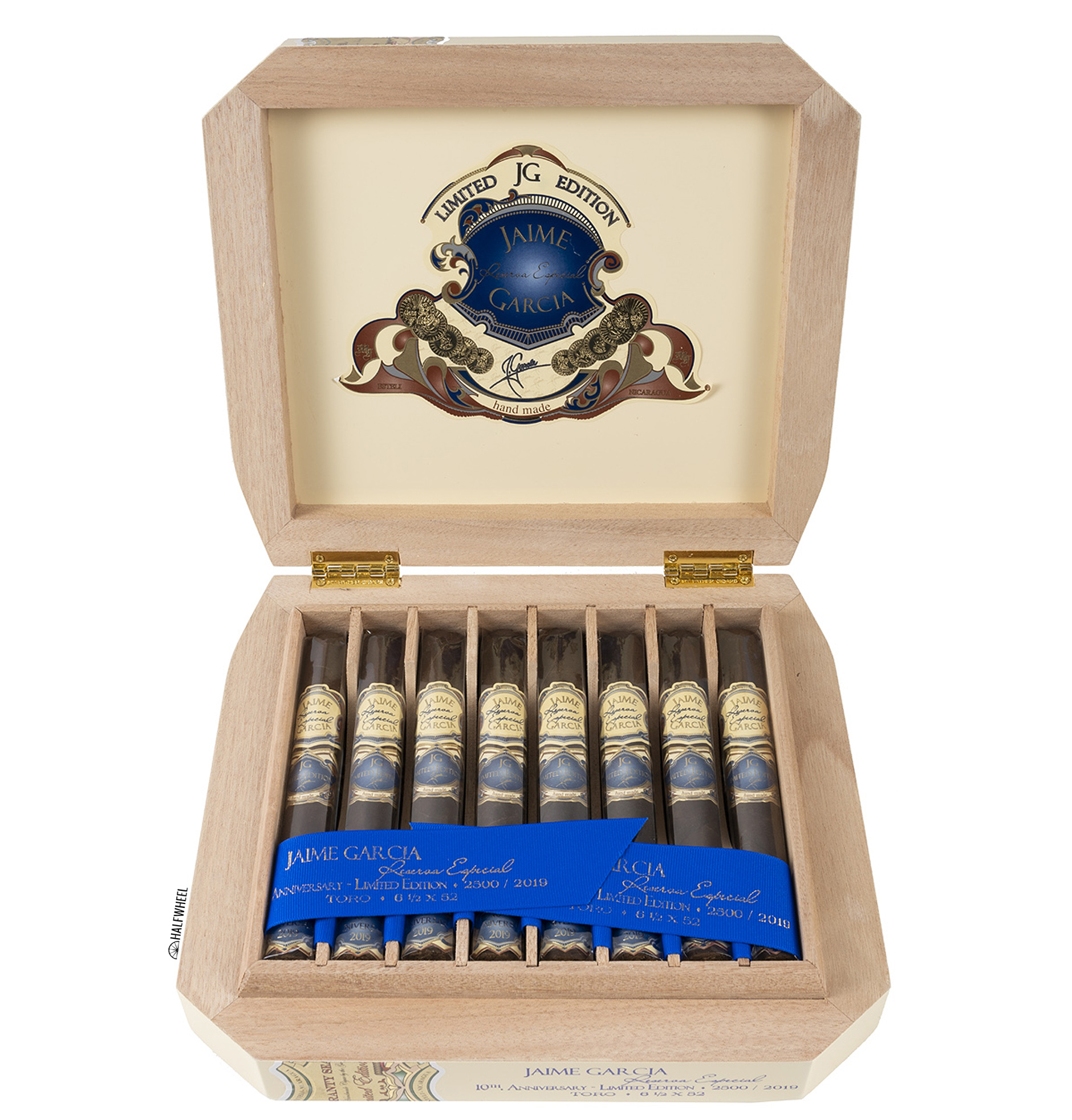 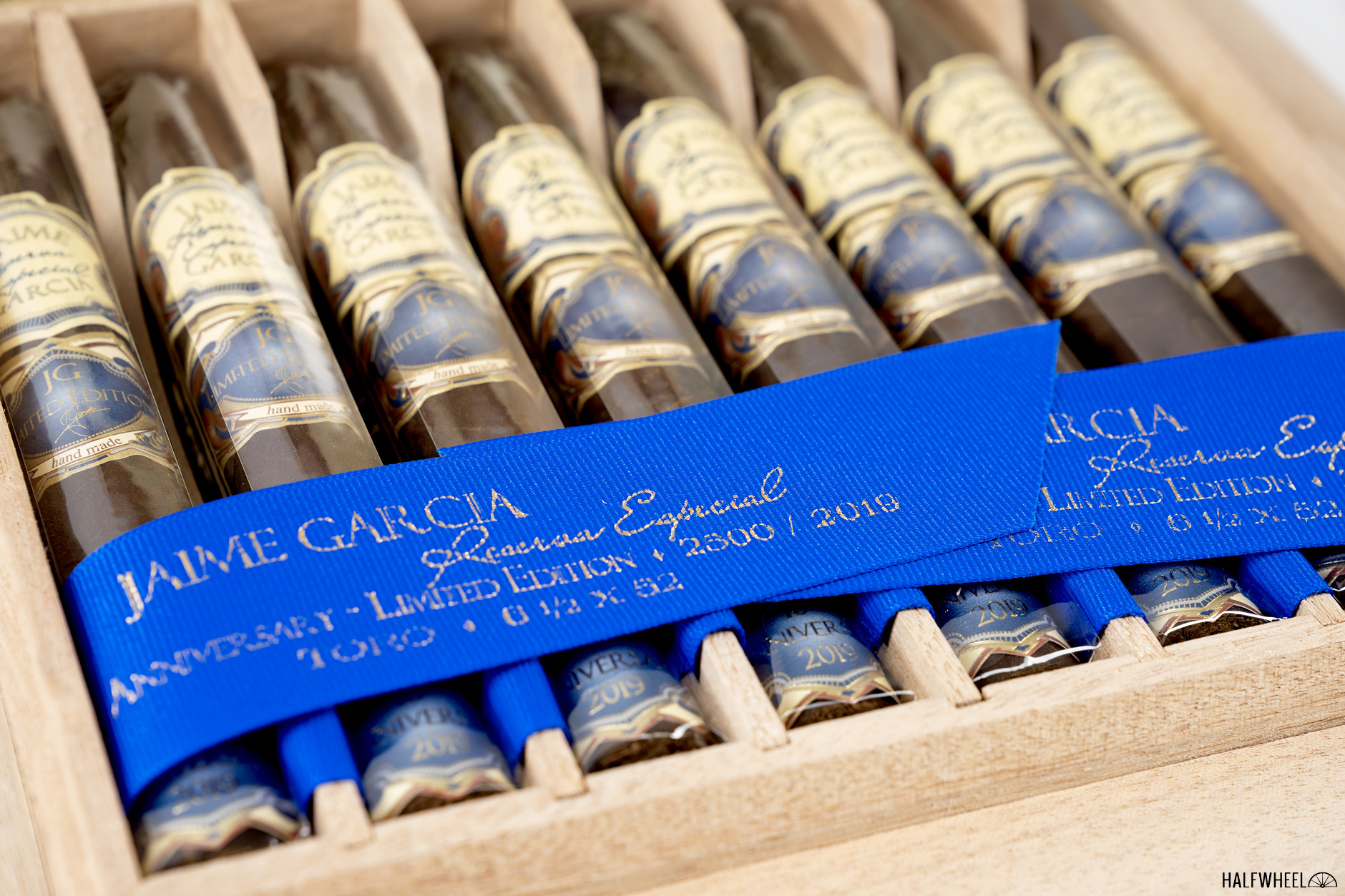 Beyond that, it is a 6 1/2 x 52 toro—a size very common to limited editions from the company—that uses a Connecticut broadleaf wrapper, while the binder and fillers come from Nicaragua, specifically from farms owned by the García family. 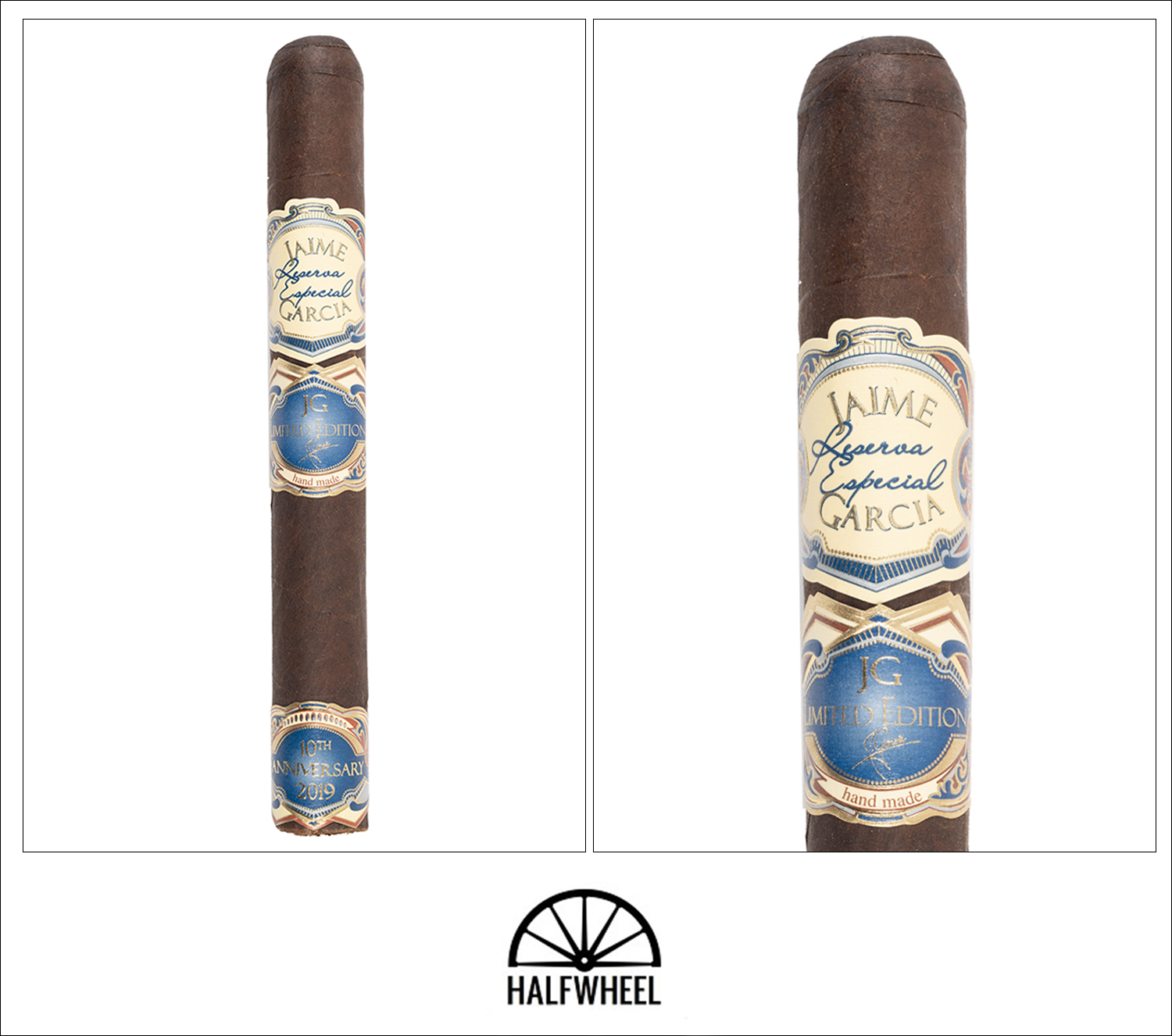 This Jaime Garcia release comes well-dressed for the celebration, wearing three bands that cover a good bit of the cigar but not enough to completely hide the dark brown wrapper underneath. The foot band needs to come off first and when it does it shows that the cigar has a network of small veins that fade into the leaf, while a bit of tooth is available upon a closer inspection. it’s a firmly rolled cigar that doesn’t offer much give but feels in line with other cigars, so I’m not concerned. Visually it looks well-rolled, and while the seams of the cap are visible, it’s applied well. The foot of the cigar offers a sweet raisin note at first that quickly finds itself competing with other aromas, namely a bit of barnyard and some steak sauce that give it a tanginess without completely shedding sweetness. One sample also makes the case for a bit of chocolate syrup, giving it more complexity and depth, while another is the lone to offer any appreciable pepper, which gets paired with an earthier base. The cold draw is almost completely different, with a dry, almost smoky note at first that picks up a bit of earth, before the intensity of the flavors drops rather suddenly.

It takes a few puffs of the Jaime Garcia Reserva Especial 10th Anniversary Limited Edition to get the flavor fired up, but when it does there is a familiar combination of sweetness and earthiness, which given the Connecticut broadleaf wrapper seems quite fitting. If it’s a medium start on the palate, it’s medium-plus on the first retrohale, where the earth and pepper are much clearer and firmer on the senses, as well as hitting a stride that I would call in line with a classic blend from My Father, not just this specific line. Smoke production is pretty plentiful in the first inch and its bluish-gray color contrasts with the color of the wrapper while seemingly complementing some colors in the band. There’s variance in just how thick and heavy the smoke and flavor are in the first inch; while I didn’t think the first sample had a noticeably heavy body or profile, the second cigar feels like it had the density of a thick brownie, sitting heavier on my tongue and warranting a mention. That brownie thickness translates into a bit of brownie flavor as well, thick and chocolatey before evolving into a mocha flavor by the addition of a touch of coffee, then quickly moving towards more earth while the last bits of chocolate drip away. There’s an interesting mellowing of the flavors at the burn line gets to the end of the first third, though they don’t disappear. Rather, while the cigar still has plenty of body, the flavors have simply dialed back the intensity a few ticks, similar to a musician or group playing a softer section of a song. Technical performance has been good though combustion in the first sample needs a bit more maintenance as I learn its rhythm.

The start of the Jaime Garcia’s second third shows that the cigar still has a good bit of earth and pepper, and if I happen to over smoke the cigar a bit, it certainly reprimands me for doing so. While it has dialed back a bit, the pepper is now a bit more pointed and gruffer and I find myself spacing out my puffs to ease this new physical sensation that the cigar delivers. By the midway point, the cigar has gotten fairly robust, especially when taking a retrohale. The sweetness that the cigar exhibited in the first third is largely gone, replaced by dry earth and a blunt pepper that doesn’t so much tingle the senses as it does punch and scrape them. The cigar still has occasional struggles with combustion, which is odd given that it doesn’t seem over humidified at all, leading me to wonder if it might just be some heavier tobacco in the filler that needs a bit quicker puffing rate. It hasn’t changed much of the flavor intensity or overall strength, both of which sit at medium-plus, though so far I haven’t felt much of a nicotine hit. One sample picks up a very harsh note as the final third approaches, as chalk in the earth goes wildly rogue and creates a significant amount of irritation. 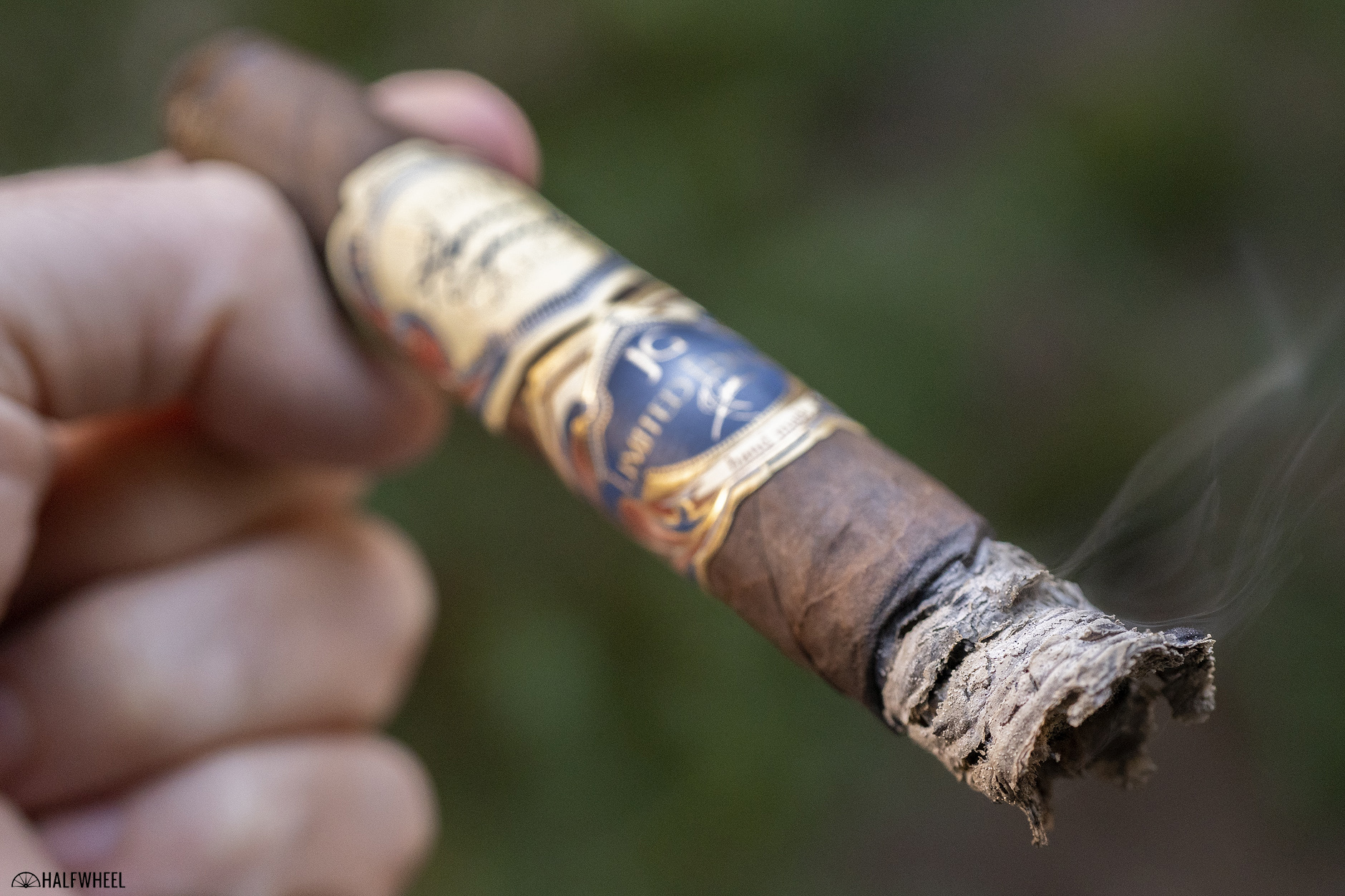 The start of the final third sees the Jaime Garcia Reserva Especial 10th Anniversary Limited Edition continue to deliver a dry, earthy flavor, with pepper getting brighter at times before finally breaking through a bit farther into this portion. It feels like the cigar has lost most of the complexity it exhibited in the first third, which is a shame as it seemed to be headed down a good path at the onset. While the cigar had just flirted with some chalk in the earthiness, it is now prominent enough to mention, and there are a few puffs where I get a touch of mineral flavors, both of which contribute to an increased drying of my mouth, particularly the tip of my tongue, making for a dual sensation with the tingling from the white pepper. The sample that picked up the harsh chalk note continues with that into the final third, cutting short the smoking time as it didn’t appear relief was forthcoming. Combustion has become more consistent and I haven’t had to relight the cigar. The draw, burn line and smoke production are still quite good, though it can take a bit of work to get the latter up to full capacity. The cigar finishes medium-plus to just shy of full in terms of flavor intensity, while strength hasn’t moved past medium-full and finishes more towards the medium mark. 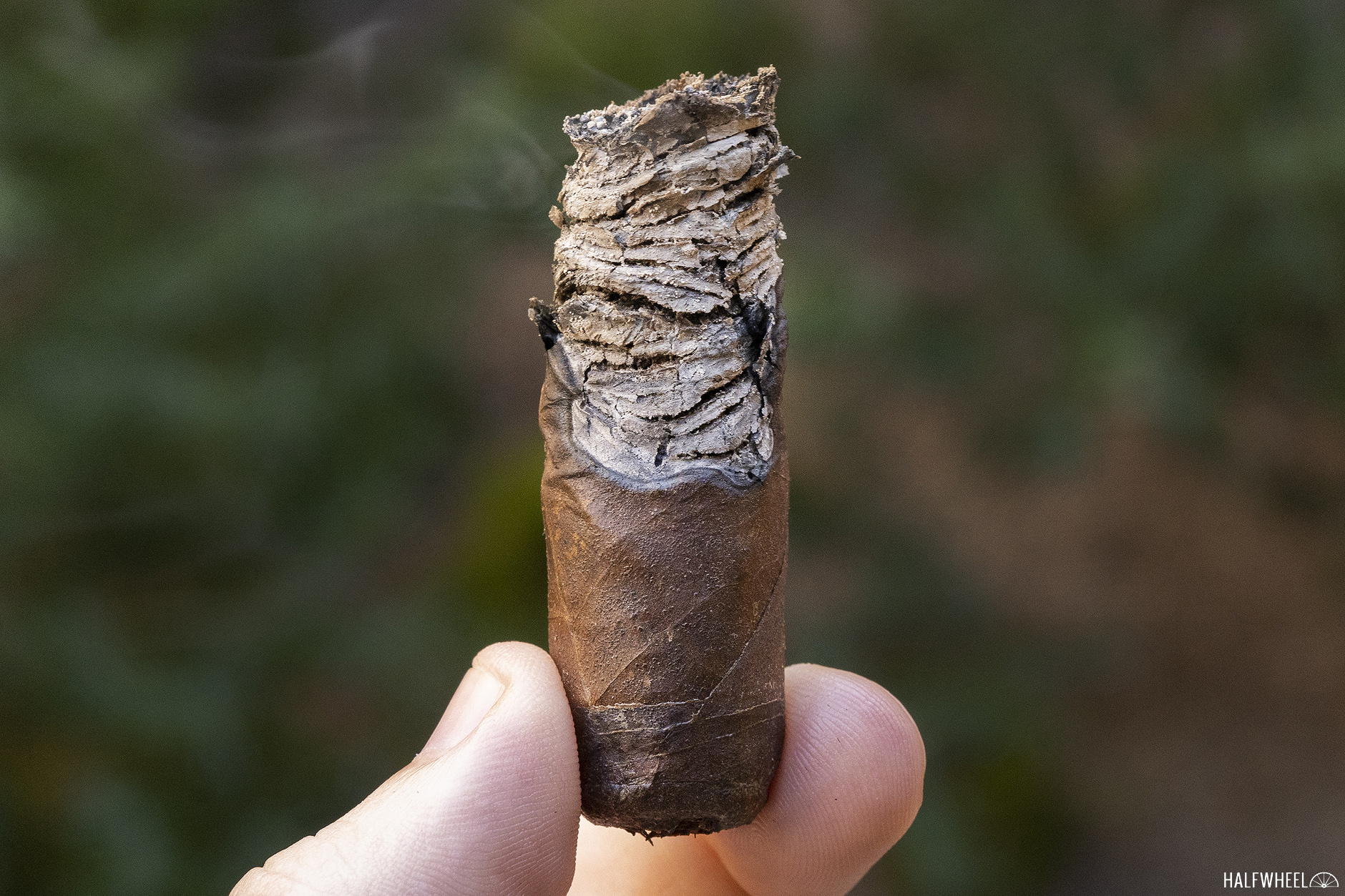 The Jaime Garcia Reserva Especial 10th Anniversary Limited Edition shows some fairly amazing flavor, depth and complexity, unfortunately, it is almost completely limited to the first third of the cigar. From there, the vibrancy of the flavor steadily diminishes with the final third left to put the pieces back together, while in the worst example things go really sideways with by way of a wild chalk note. If this cigar could hold onto the profile of the first third better, and in a perfect world carry it through to the final puff, this would easily score much higher and would earn a glowing recommendation. As it stands now, it's a strong start that simply doesn't sustain.