It’s an anniversary year for S.T.Dupont. This year marks 75 years since the company was commissioned to create 100 lighters (more on that below) and started a new chapter in the company’s history as a maker of lighters. Perhaps more notably at the 2016 IPCPR Convention & Trade Show, this year is the first year in the company’s new distribution agreement with Davidoff of Geneva USA and as such S.T.Dupont was located in the Davidoff booth.

For S.T.Dupont’s 75th anniversary of making lighters, the company has created five unique collections in varying levels of both ornateness and price. Four of these collections will begin shipping in September, while Blue Flame Lacquer ships this month. Because of the detail for each piece, a three-month waiting window is required from the time piece is ordered before it will be delivered. 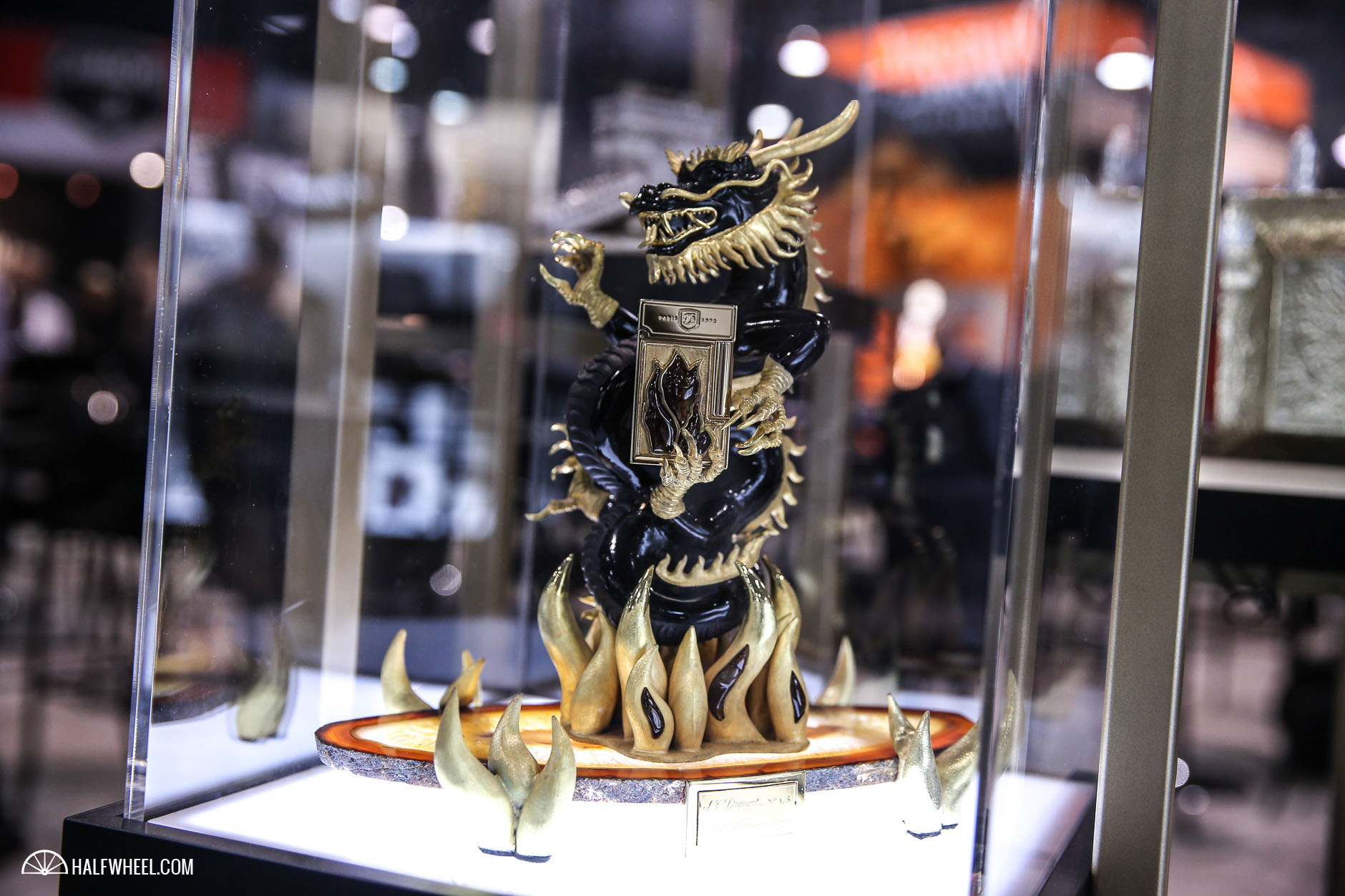 The company says it took four people—two carvers, a polisher and a metalsmith—over 550 hours to create this piece. It is based on the Chinese symbol of the dragon and is a collaboration between the French company and Luis Alberto Quispe Aparicio.

For this, he used obsidian for most of the dragon body and fire agate inside the lighter and Brazilian agate on the base of the stone. 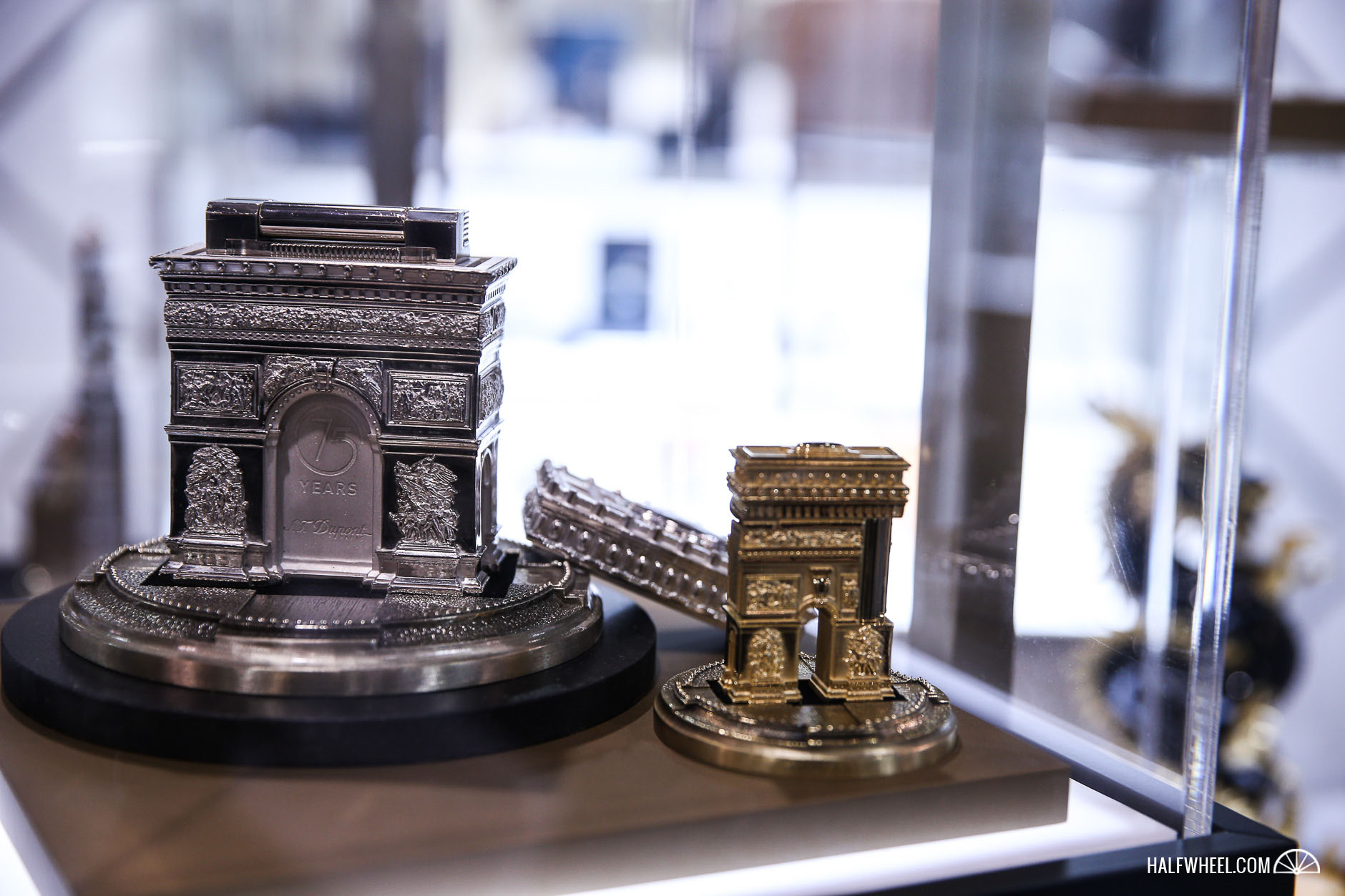 S.T.Dupont is very much a French company and what better way to celebrate an anniversary than with a creation based on one of the most famous French monuments. Philippe Tournaire, the French jeweler, was called in for work on three separate pieces. 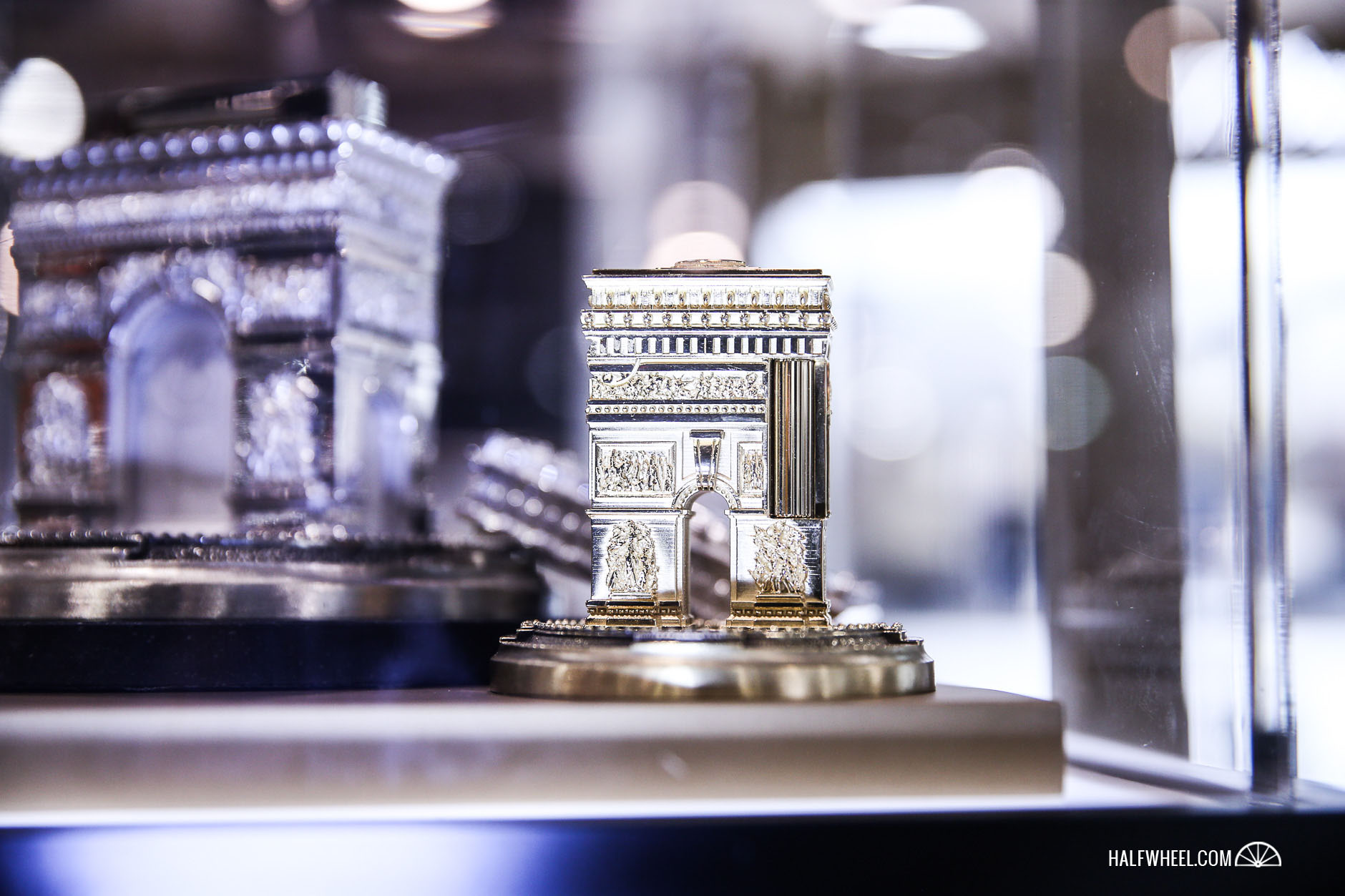 The lighter is available in either rhodium or yellow gold finishes, both priced at $11,000 and limited to 288 pieces. In addition, 88 more lighters in each finish will be produced with a base priced at $12,000. 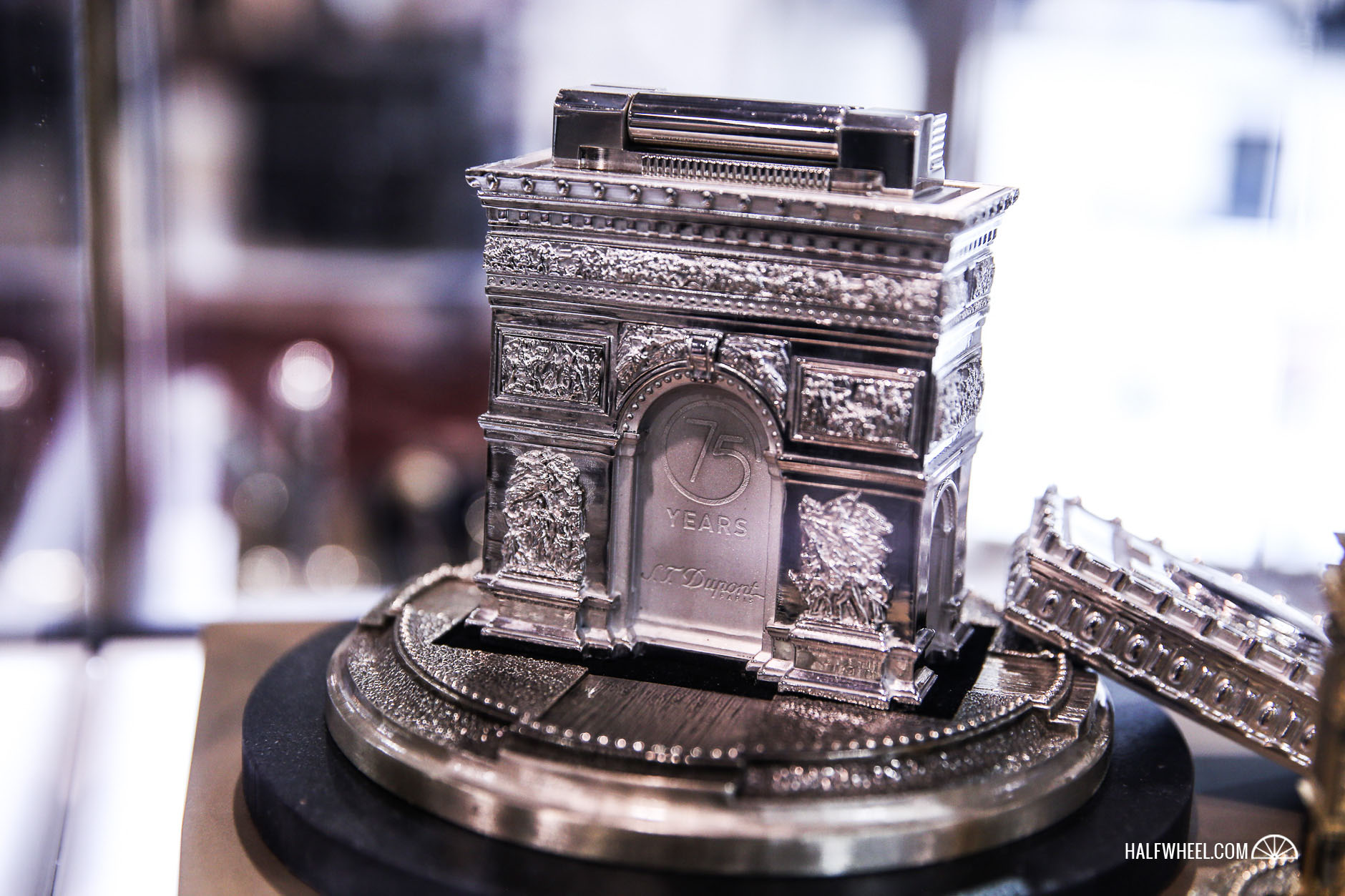 Finally, a larger Jeroboam Lighter, made of white bronze with a silver patina is being offered for $27,650 and limited to eight pieces. 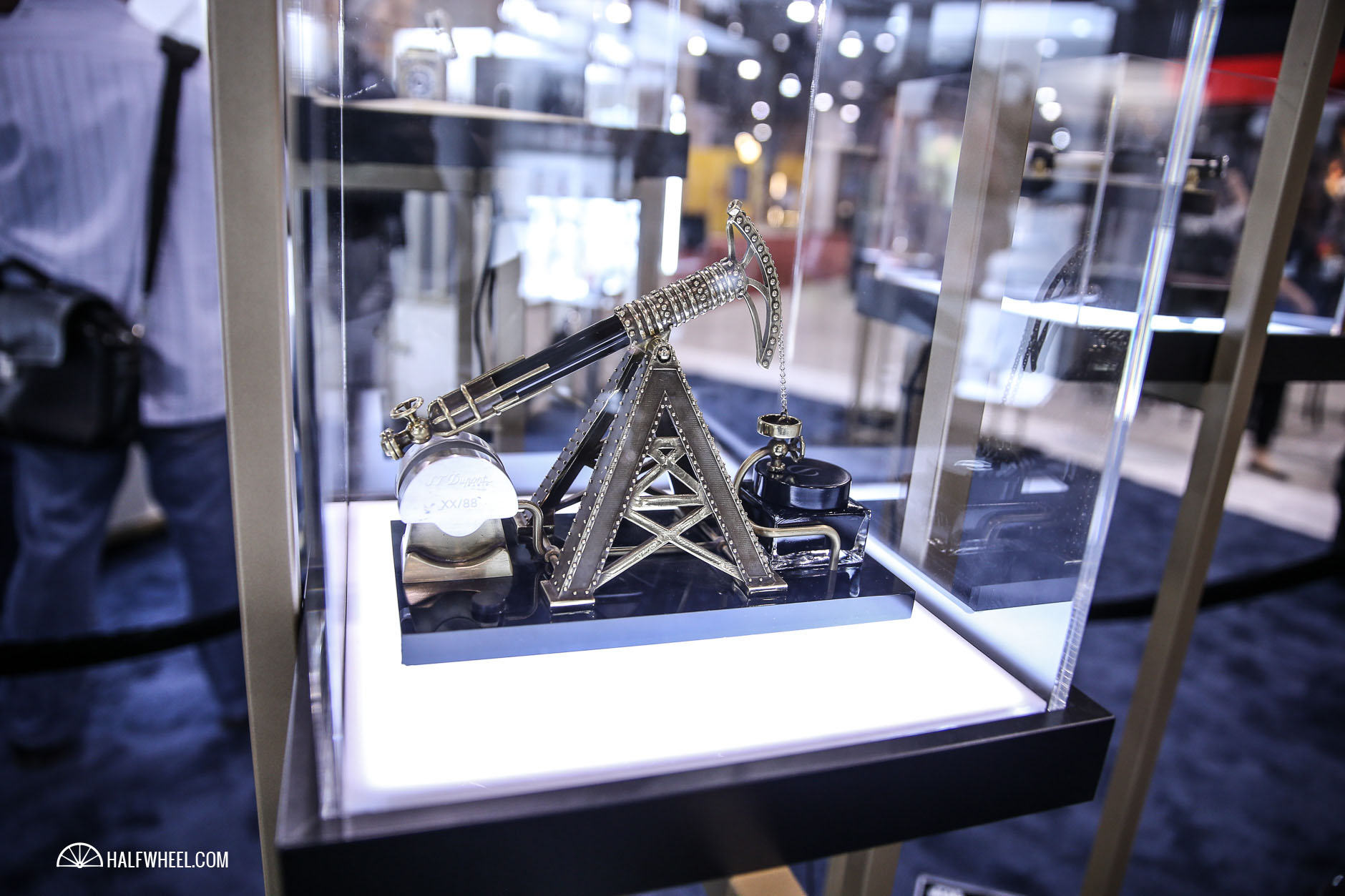 Also a collaboration with Tournaire, this pen is made to pay tribute to the oil derricks of a previous time. It uses Chinese black lacquer and bronze with both patina and nickel finishes. Interestingly, it also features an ink bottle on the right side of the pen’s base. 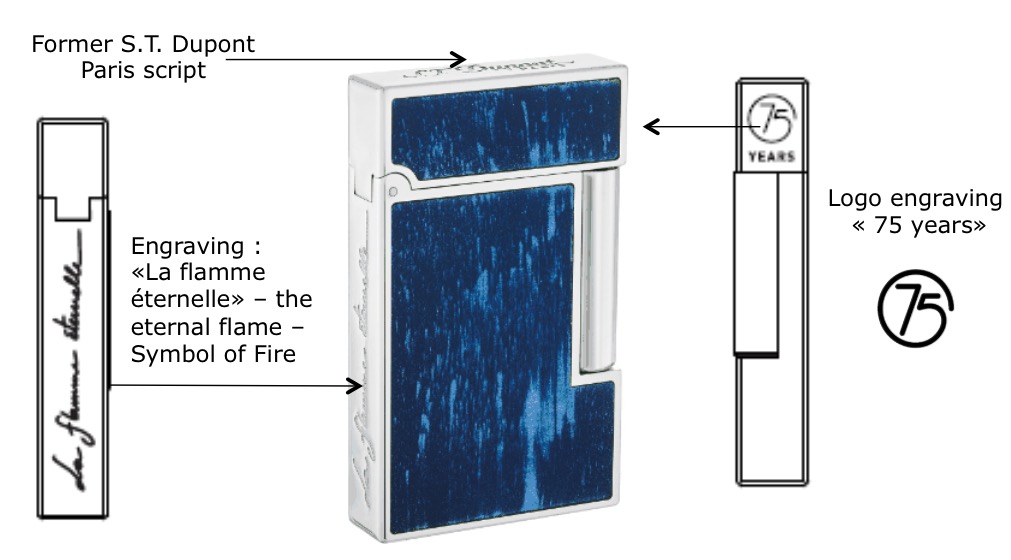 A special lacquer process is used that involves spreading mother of pearl powder over the lighter while the lacquer is applied. It creates a unique pattern for each lighter. 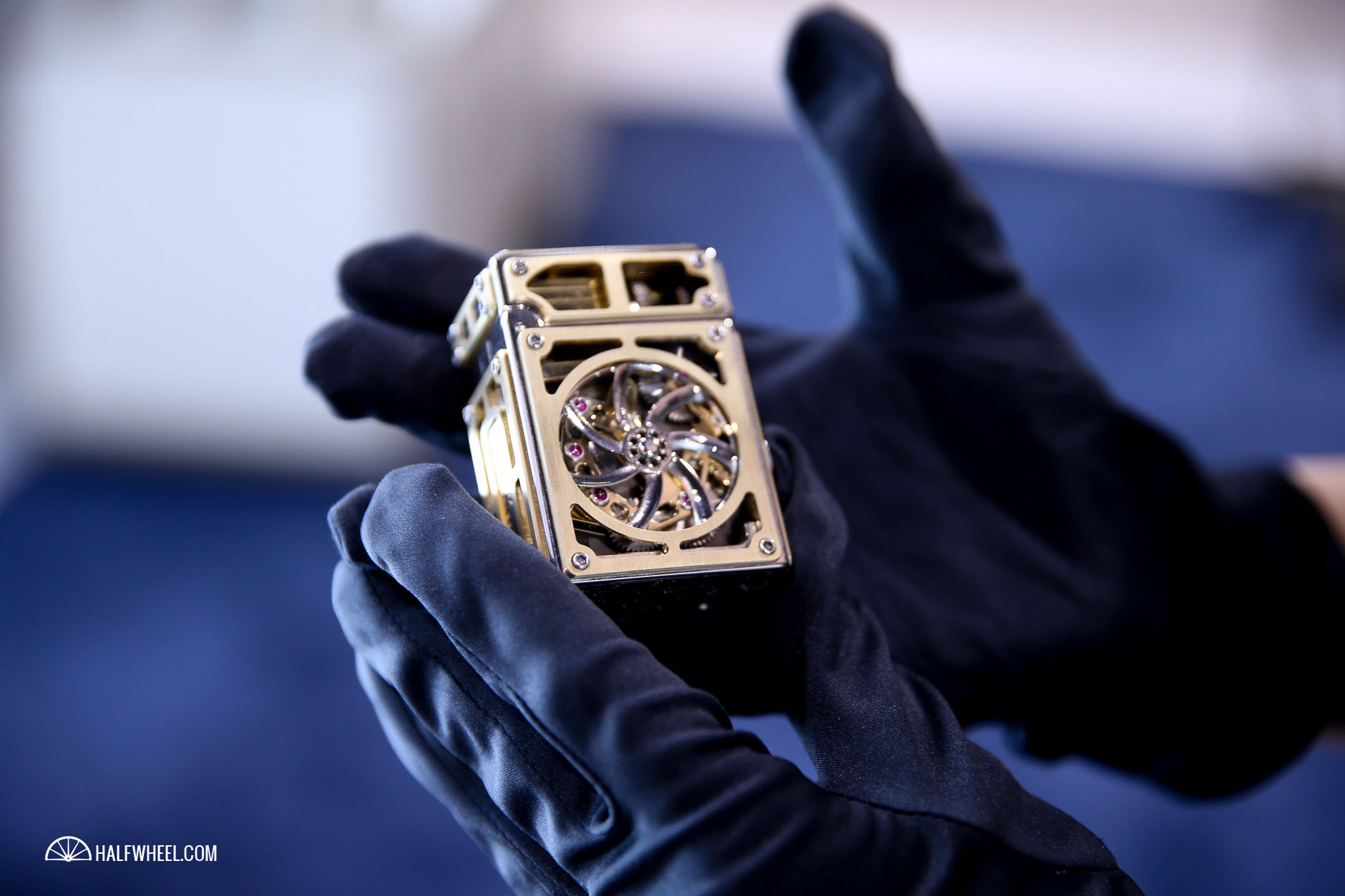 Easily my favorite new product of the trade show.

On one side of the lighter is a propeller blade that moves when the lid is opened or closed. It, along with the rest of the mechanical pieces on that side of the lighter, is made to pay homage to a watch movement. On the other side is a dial made to mimic a vault, only it works, meaning you can set a combination that prevents anyone else from using your lighter.

As if that wasn’t enough, the lighter is dual flame. As seen above, you light it like a soft flame and then you can raise a button on the side to activate a torch flame.

It is available in either palladium or yellow gold/palladium. 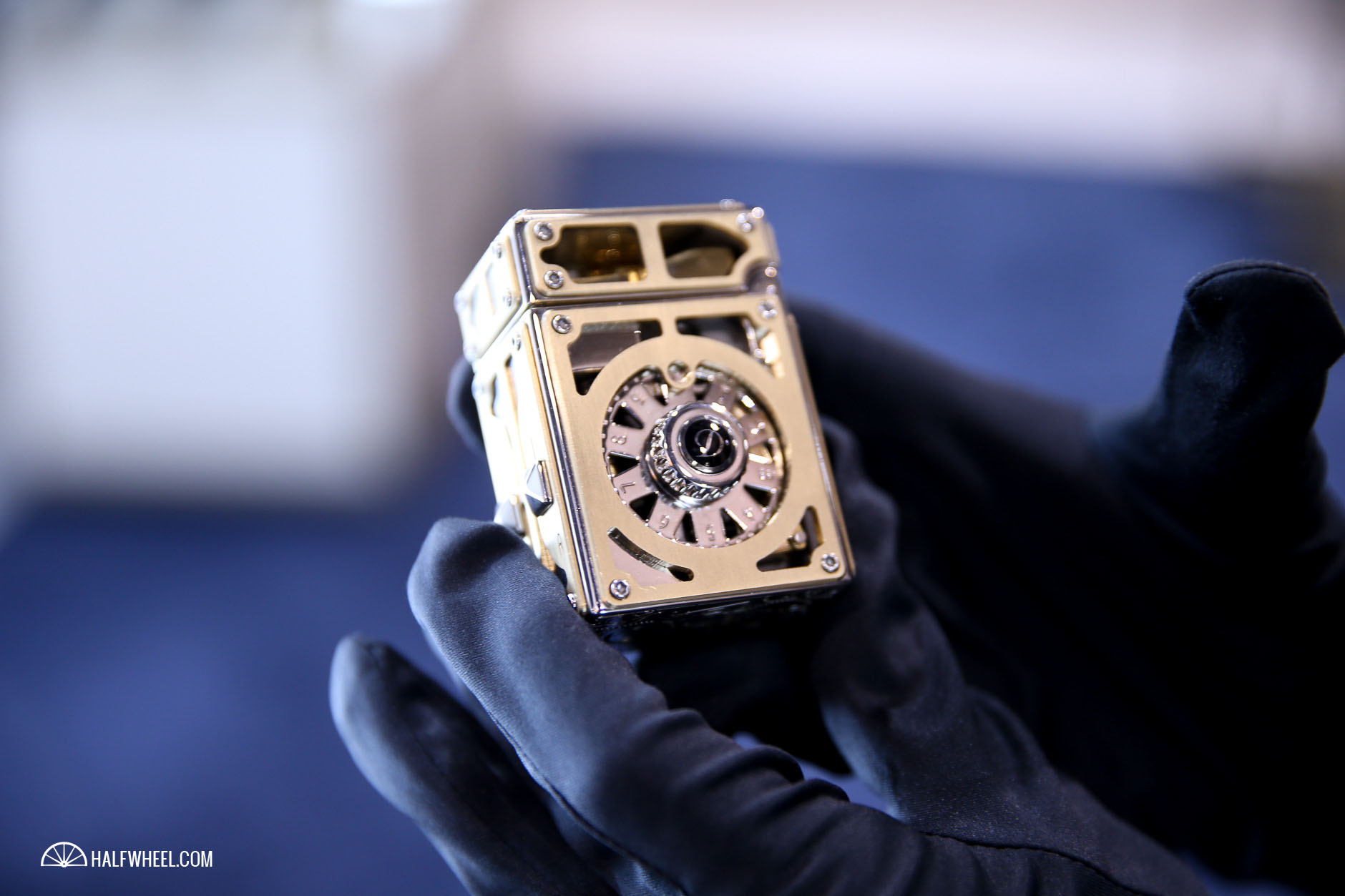 My understanding is both are limited to eight pieces, priced at $41,000. And yes, they have sold some. No, not to me, yet. 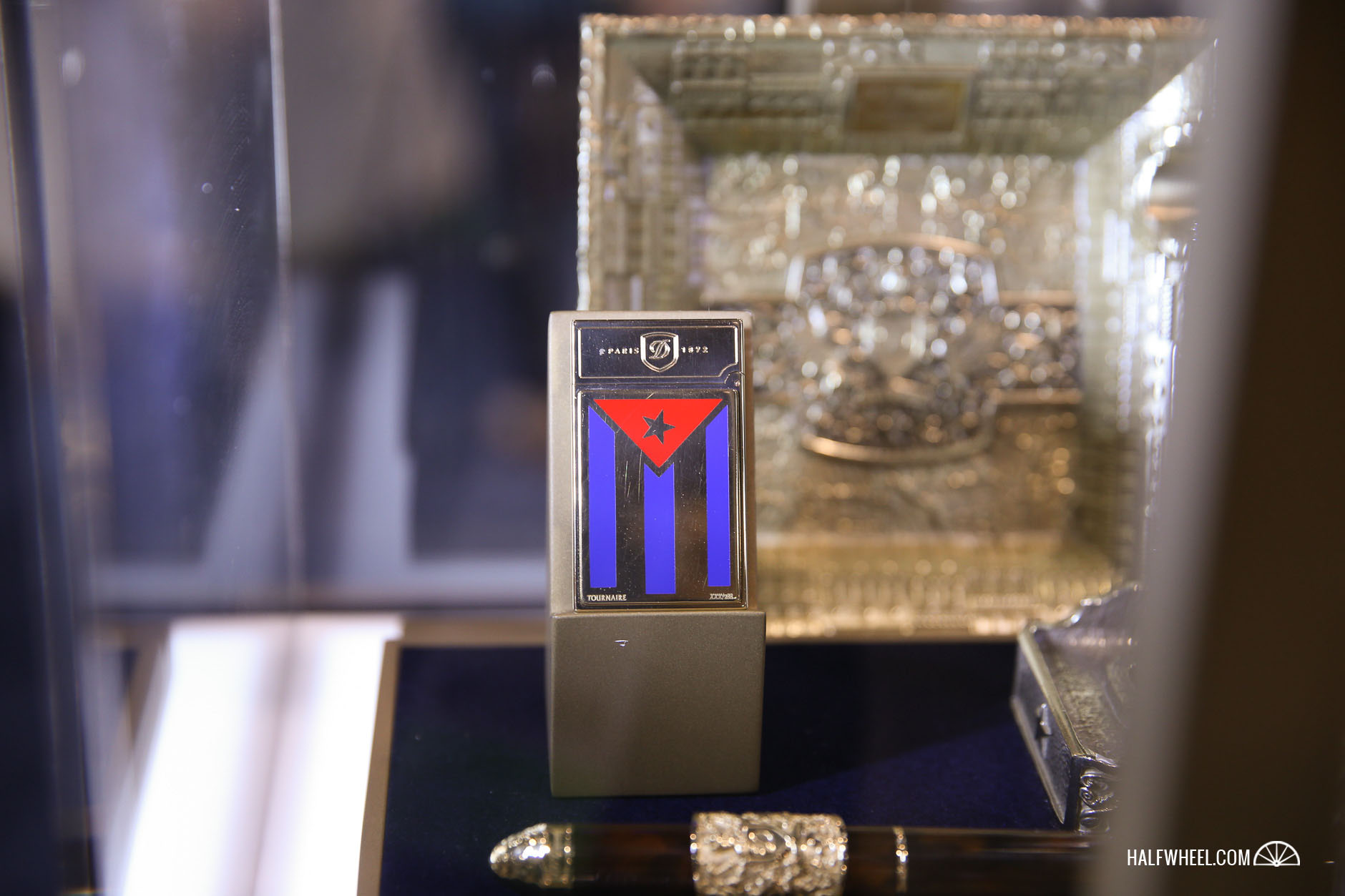 Another collaboration with Tournaire, paying tribute to Cuba’s architecture. The collection launched earlier this year, but it was a large part of the booth. 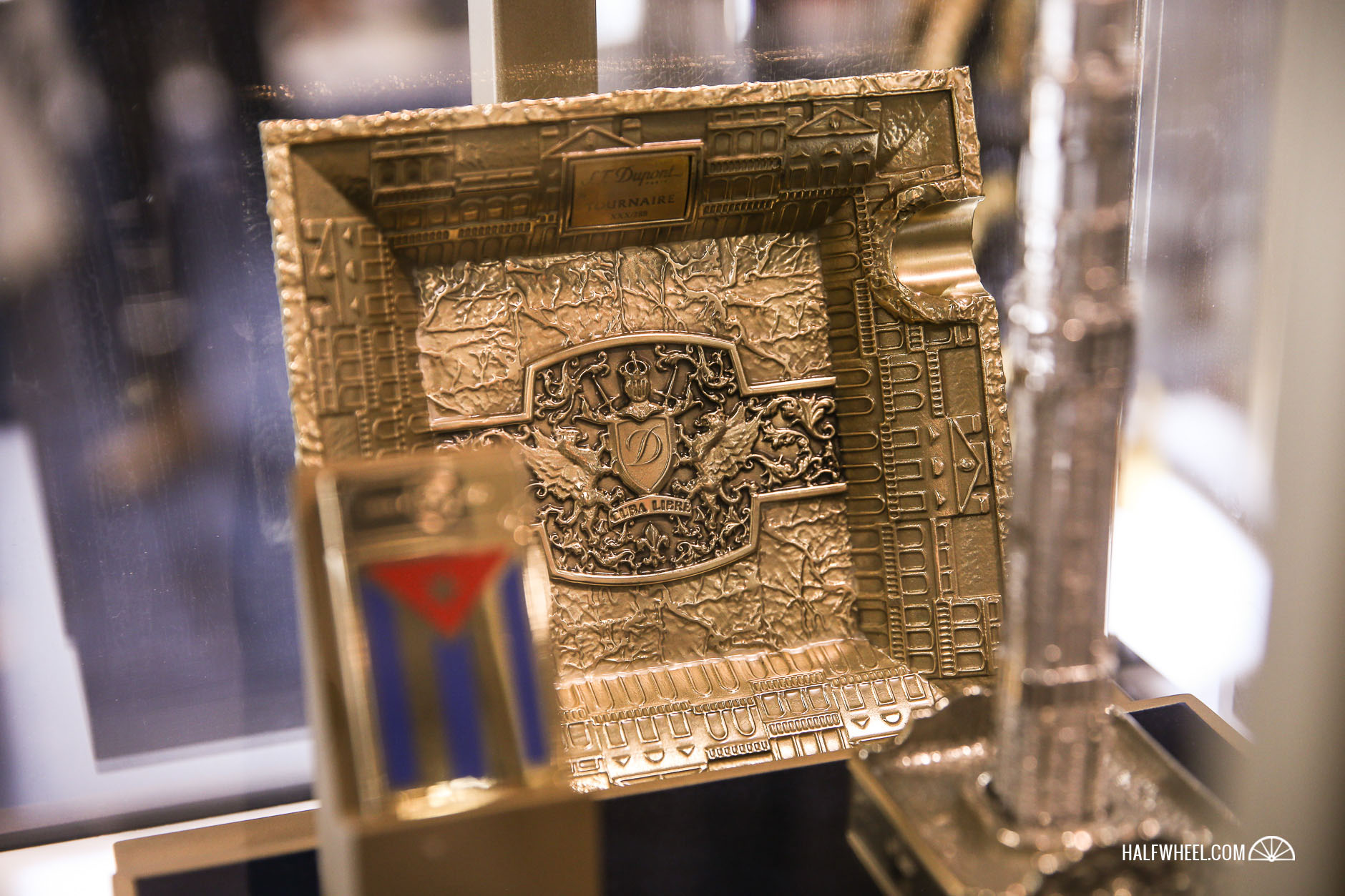 The collection starts with a Ligne 2 lighter that features the Cuban flag on one side and architecture on the other side. It’s limited to 288 pieces priced at $6,500. There’s also a bronze ashtray priced at $4,500 and a bronze cutter with rhodium plating priced at $4,250.

Two different pens, a fountain and a roller, are made using Chinese lacquer, both priced at $6,250. All items are limited to 288 numbered pieces. 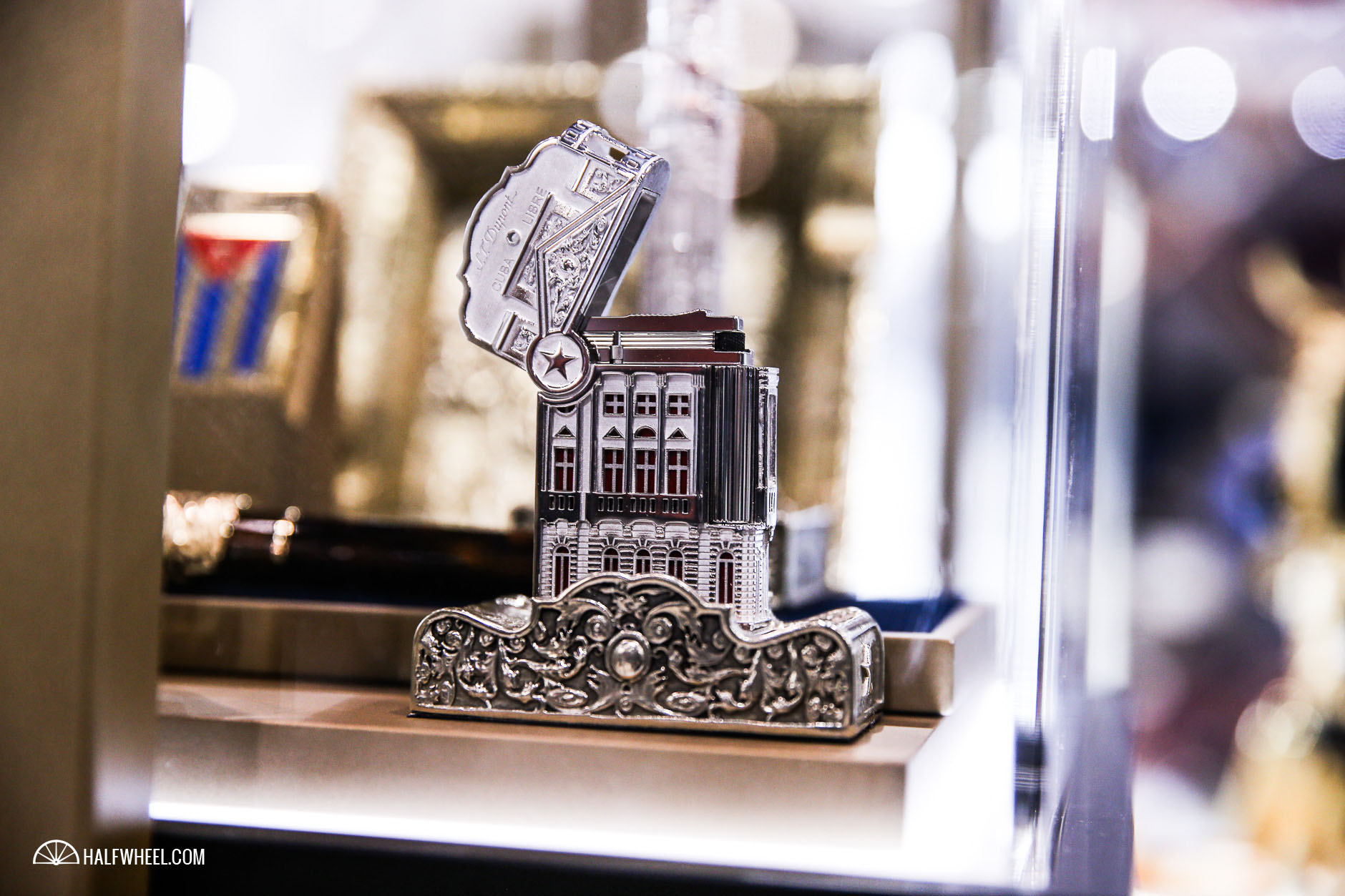 The company has also made two exclusive collection designs out of bronze and with rhodium plating. A Ligne 2 lighter designed to look like a building is priced at $13,500. While it’s not obvious at first, the windows of the building actually feature blue lacquer peaking through.

In addition, there are two more pens, err writing instruments. All three items are priced at $13,500 and limited to 88 pieces. 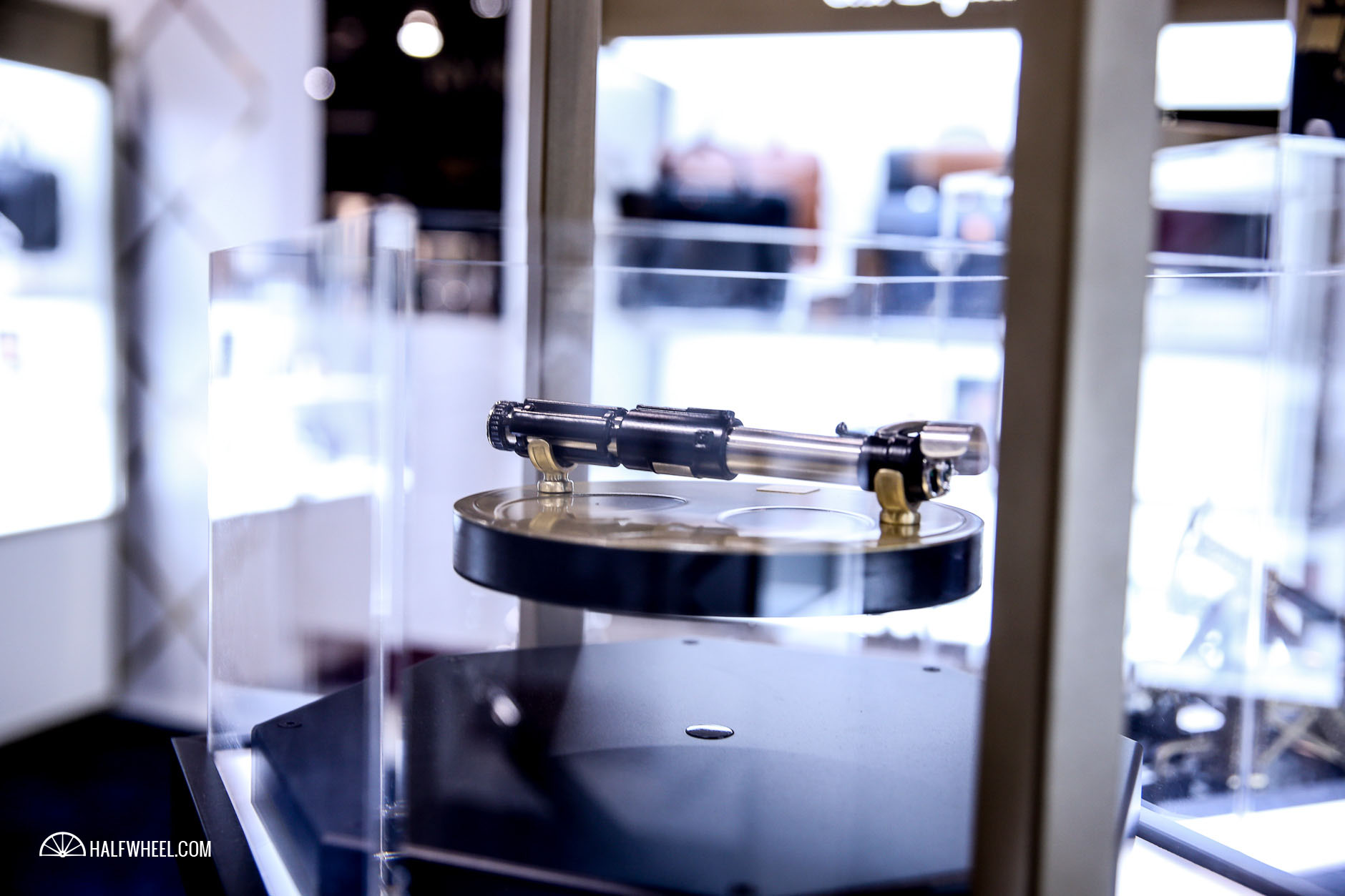 The $25,000 levitating pen the company released late last year in collaboration with Star Wars was back. To be clear, the holder of the pen—not the pen itself—levitates from the base. 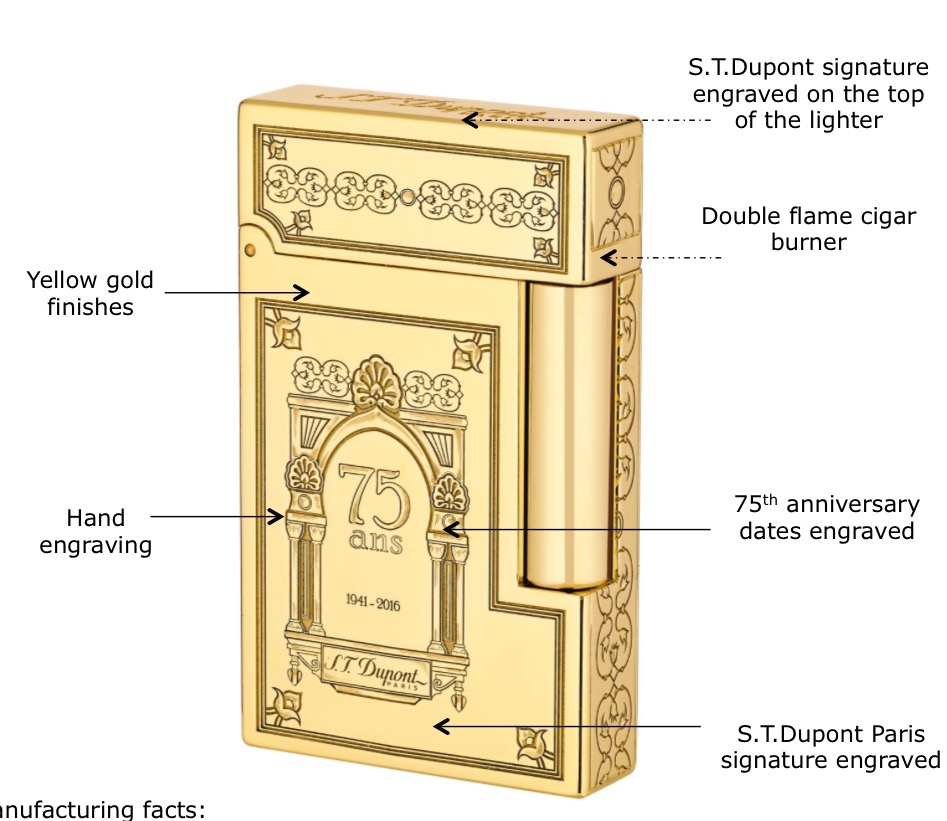 A collaboration with Frederic Krill, another prior Dupont collaborator, the nigher pays homage to 100 lighters sold in 1941. Seventy-five years ago, Maharaja of Patiala commissioned 100 gold lighters, an order that led to the company becoming a lighter manufacturer.

This lighter pays tribute to both S.T.Dupont and the palace of the Maharaja of Patiala with Krill handling the detailed engraving. 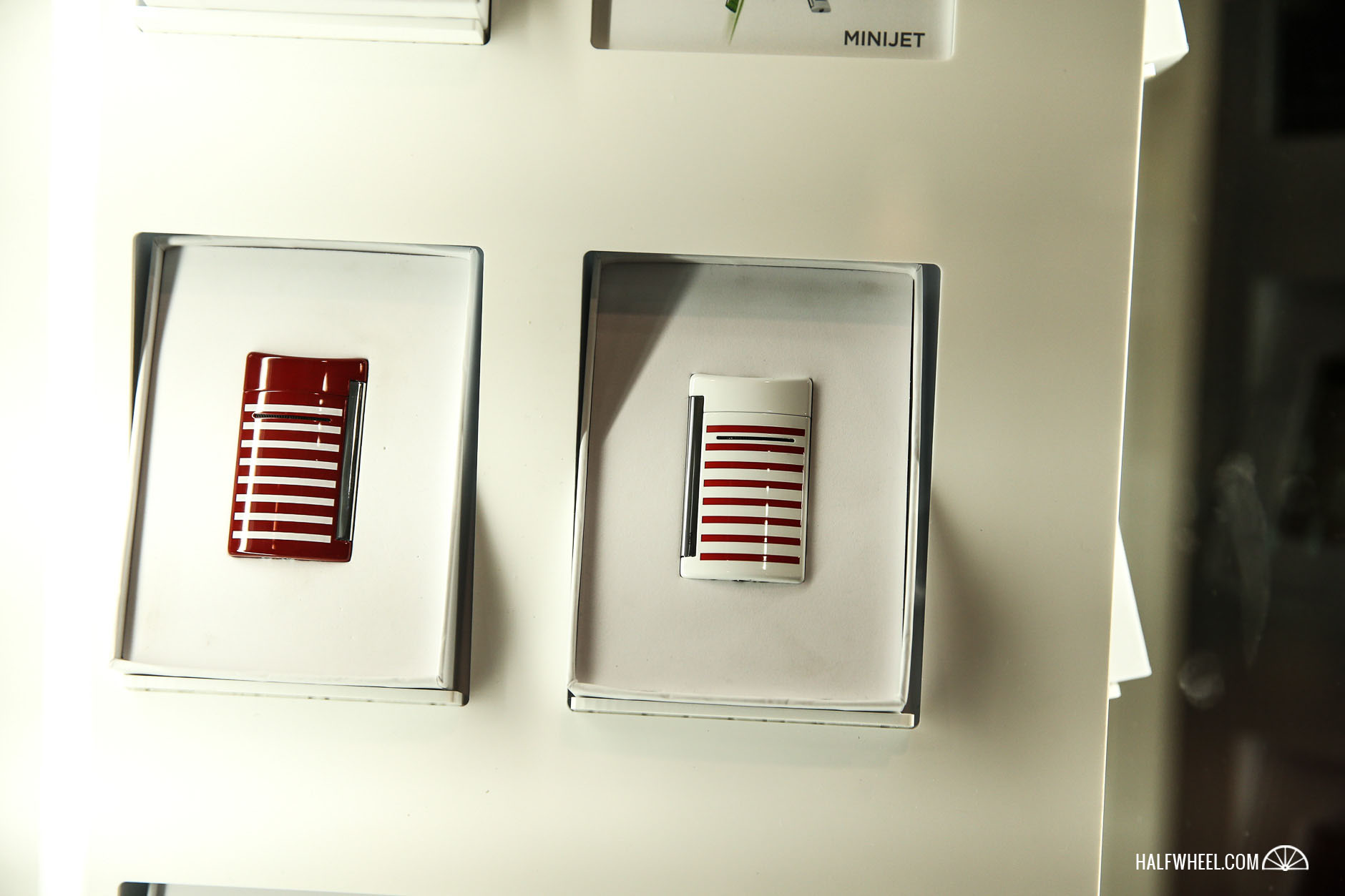 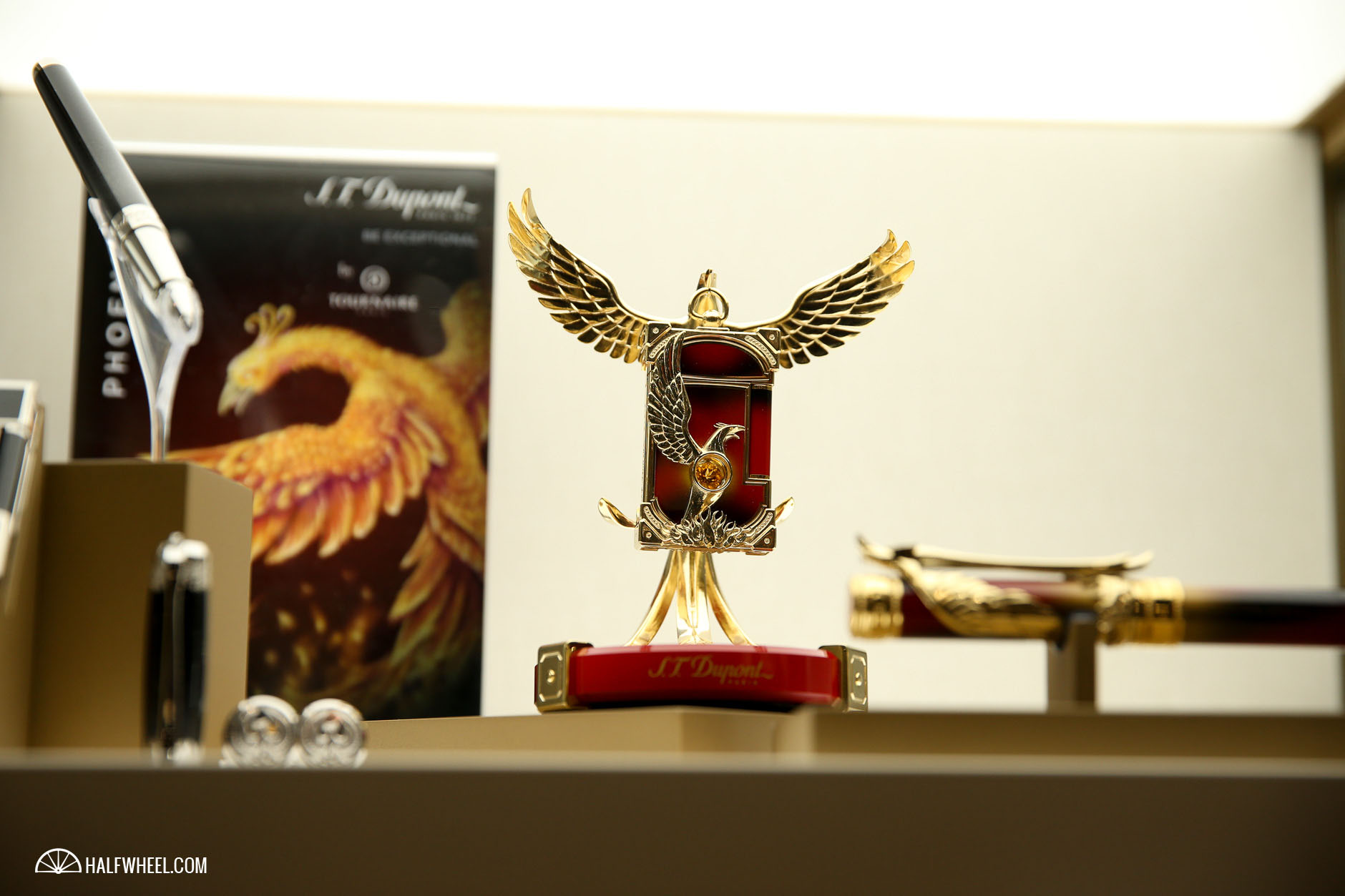 There’s little chance of me explaining this better than S.T.Dupont, so here’s how the company describes the collection:

The “Phoenix Renaissance” Limited Edition is inspired by the legendary journey of the firebird that returns to the temple of Heliopolis, after being reborn. This collection, on the theme of revival, superbly illustrates the endlessly renewed inspiration of the House craftsmen, who express themselves by combining ancient techniques in the creation of a unique red flamed natural lacquer adorned with smoky and fiery nuances. 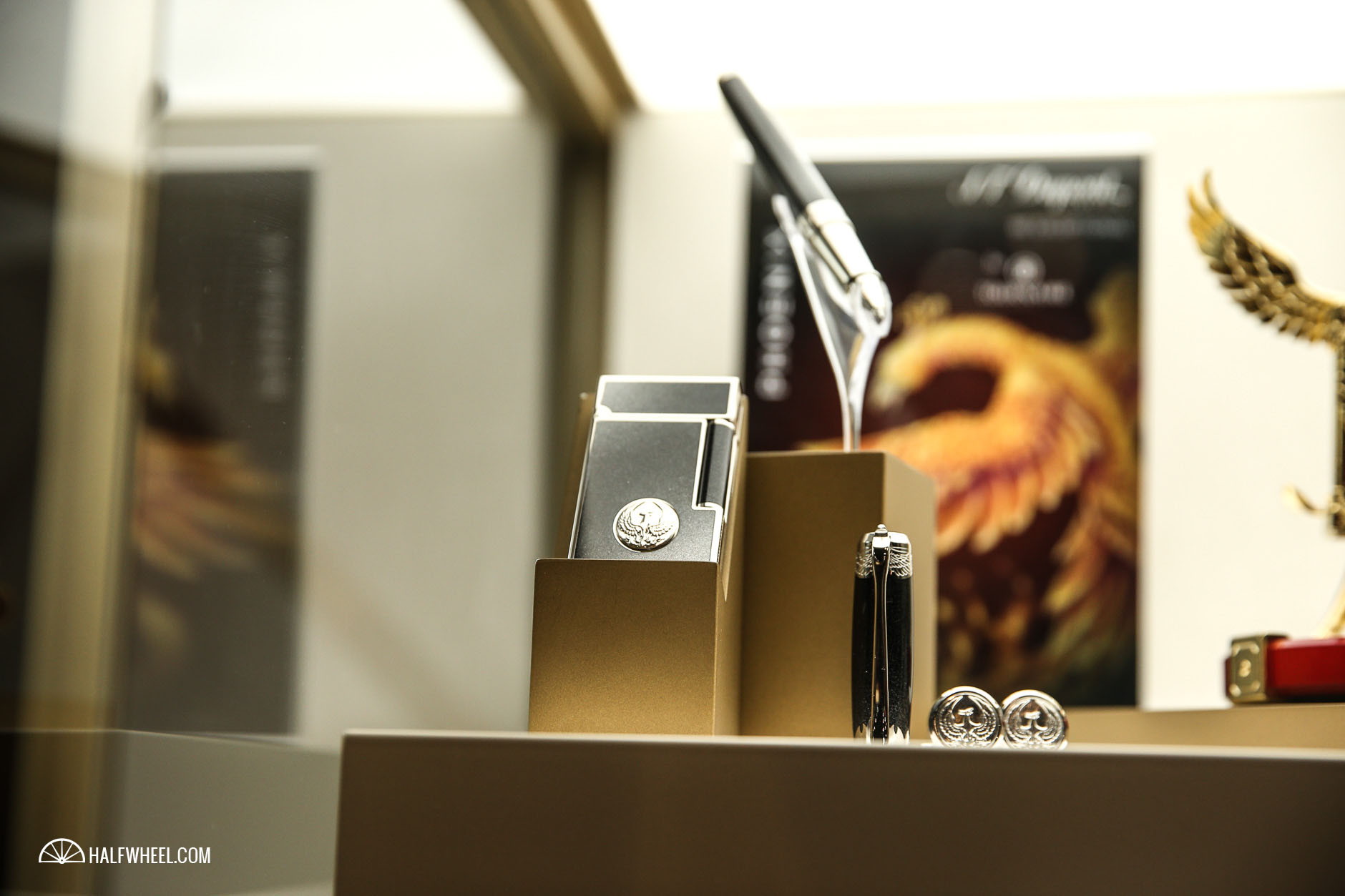 On the low end is the Premium Collection. It features lighters and pens, each in a unique smoke gray finish, limited to 2,016 pieces. Both the Ligne 2 lighters and Line D pens are $1,120. 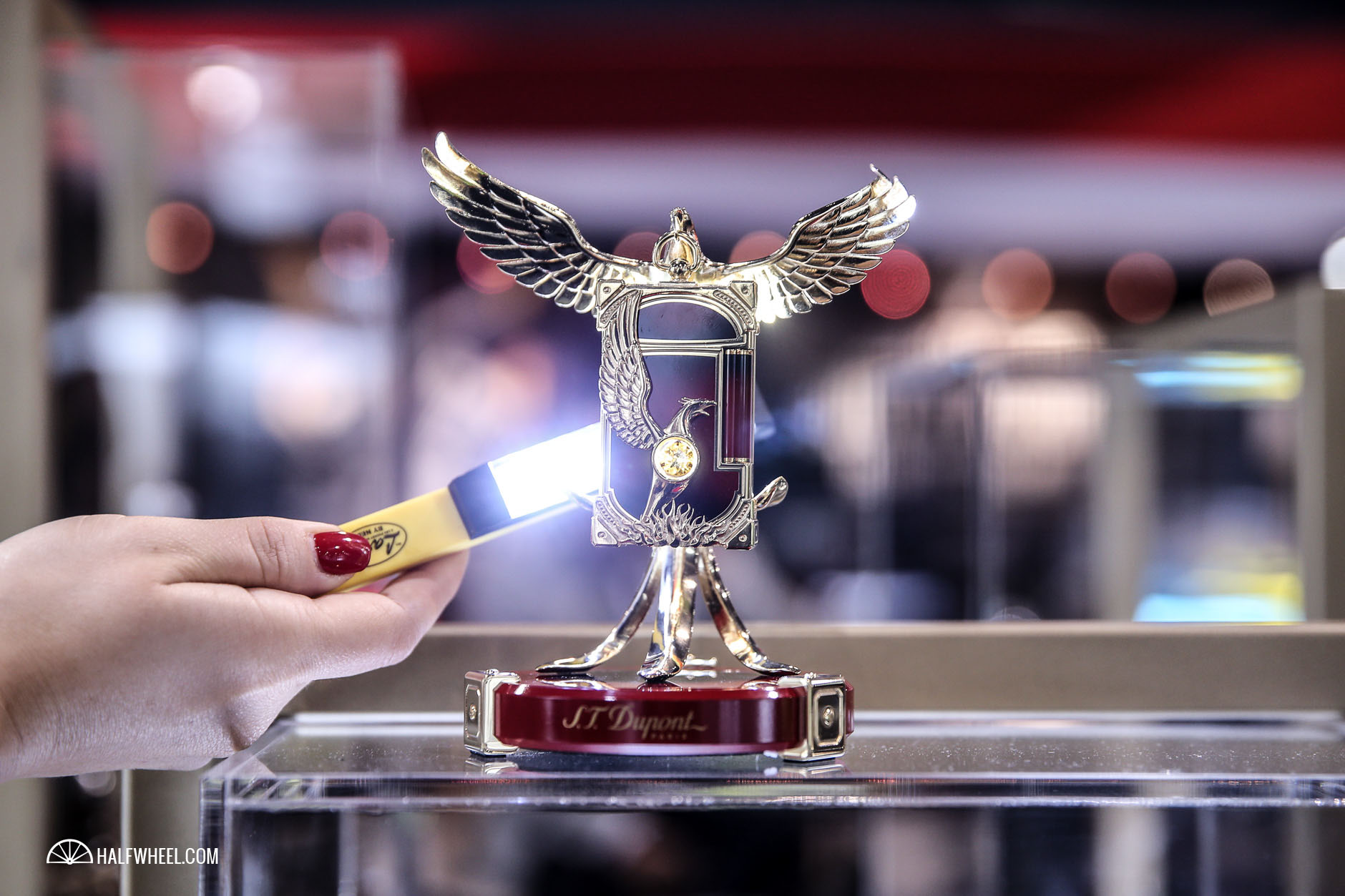 Next up is the Prestige Collection, which is also limited to 2,016 pieces in both writing and lighting pieces. Citrines are added to both the lighter and pen, making for a particularly interesting effect on the lighter. It should be noticed, this also features a key ring at the top if you wanted to wear your lighter like a necklace or have a $3,660 lighter attached to your car keys. 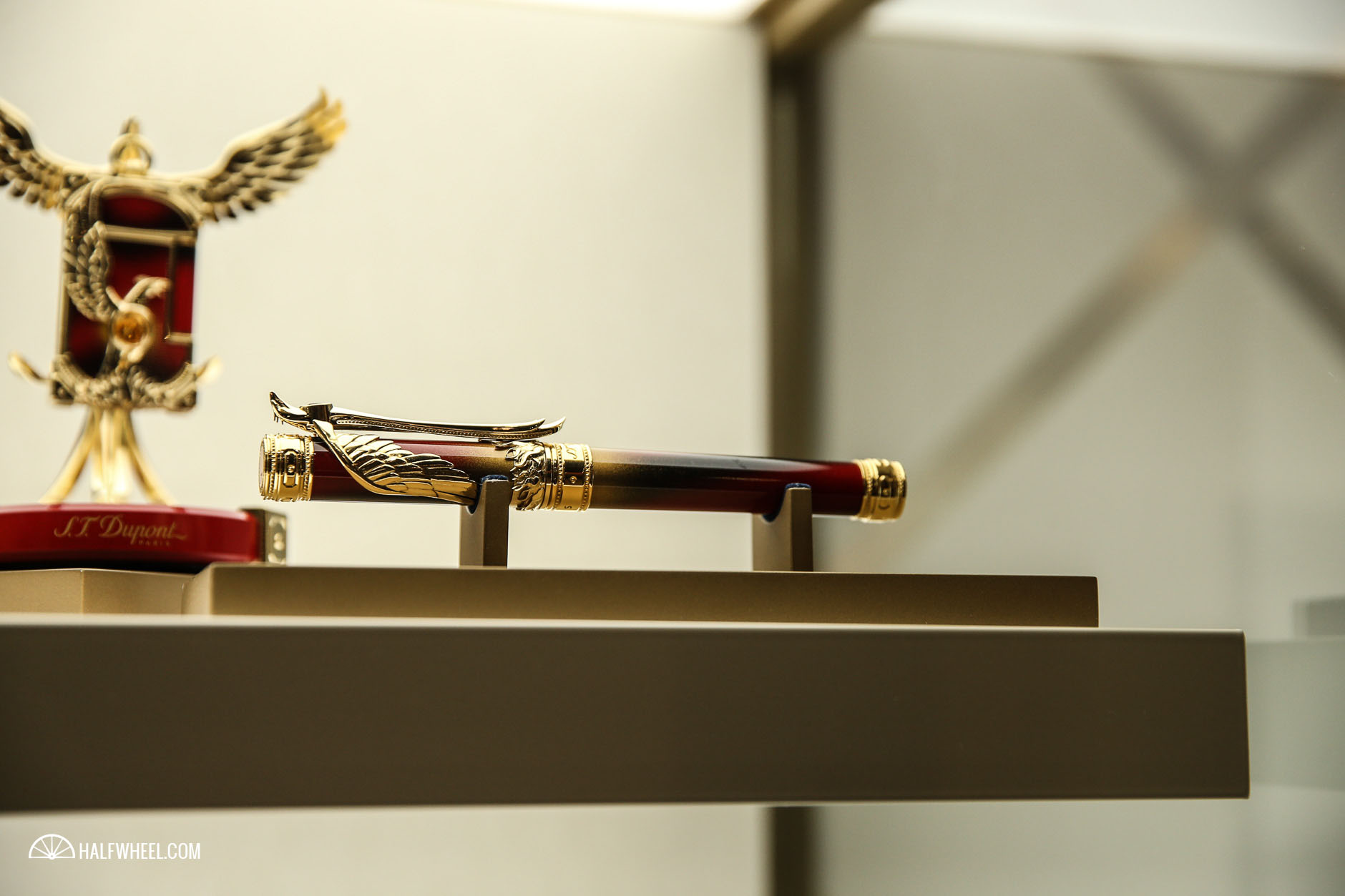 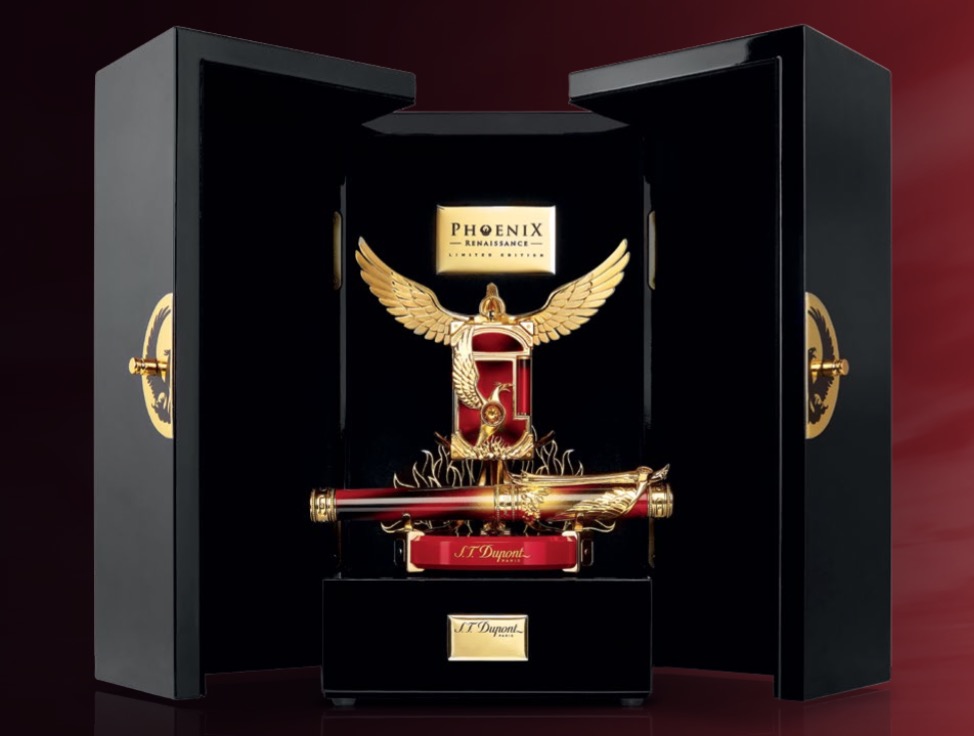 S.T.Dupont will also release 30 Collector’s Edition Boxes which feature both the pen and lighter, priced at $10,622. 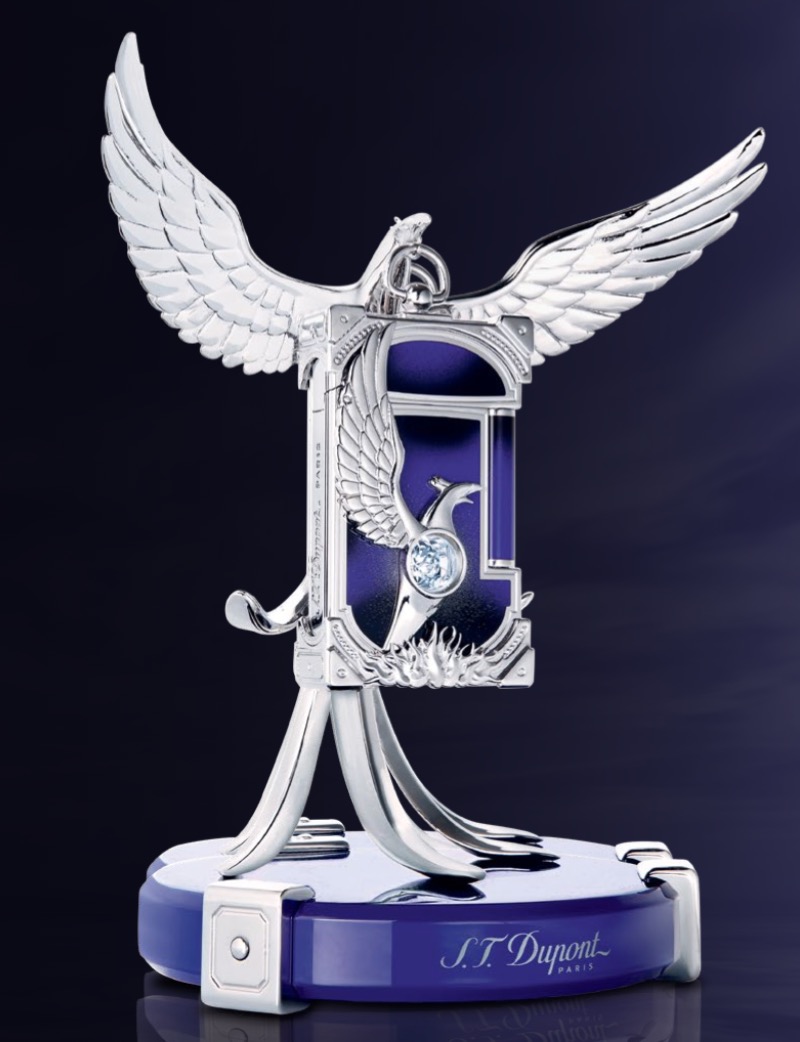 Finally is the Diamond Collection, 10 pens and lighters each priced at $25,500. As expected, both contain a .45 carat diamond. 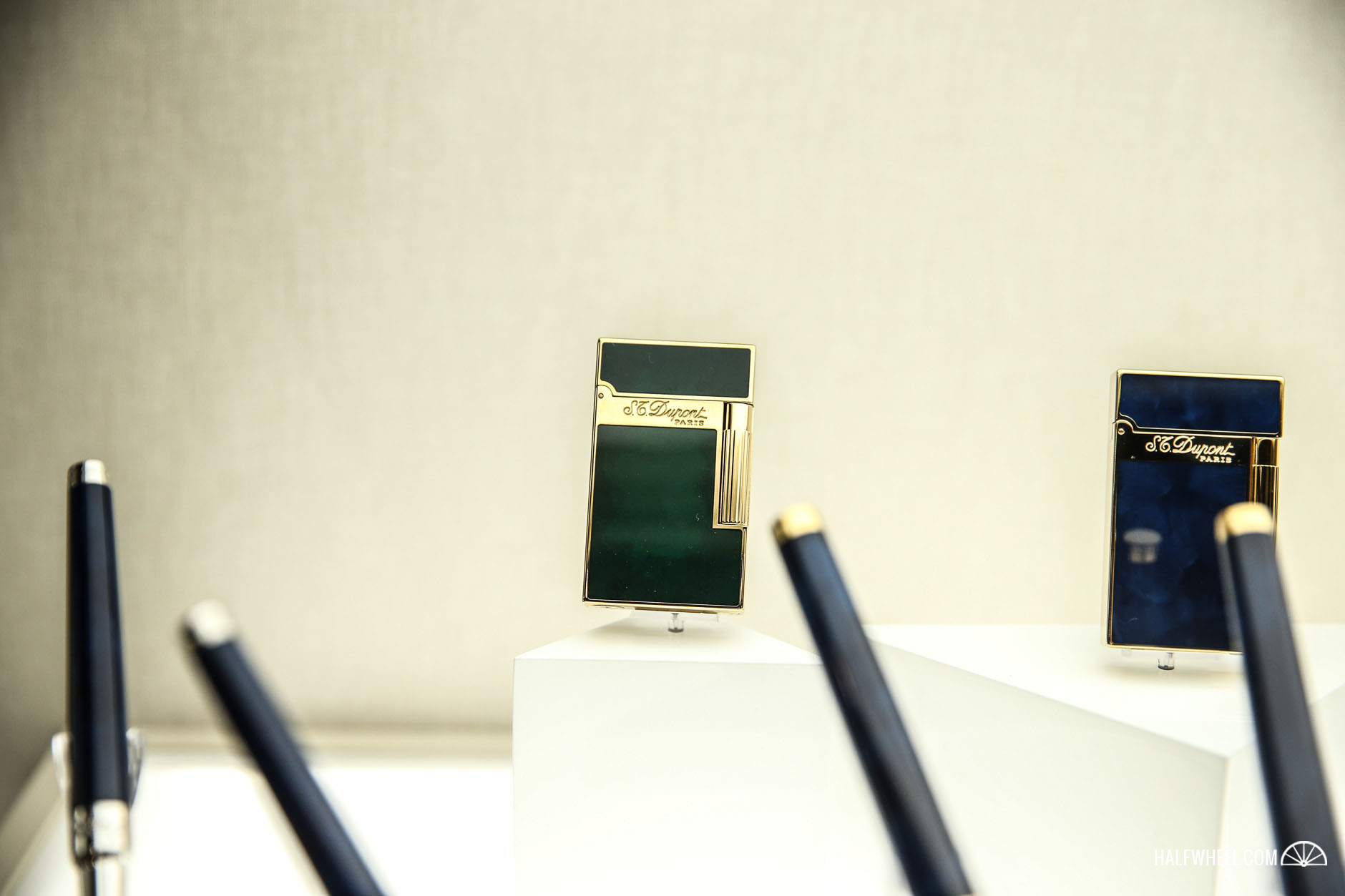 Now available in purple and green. Both priced at $1,452. 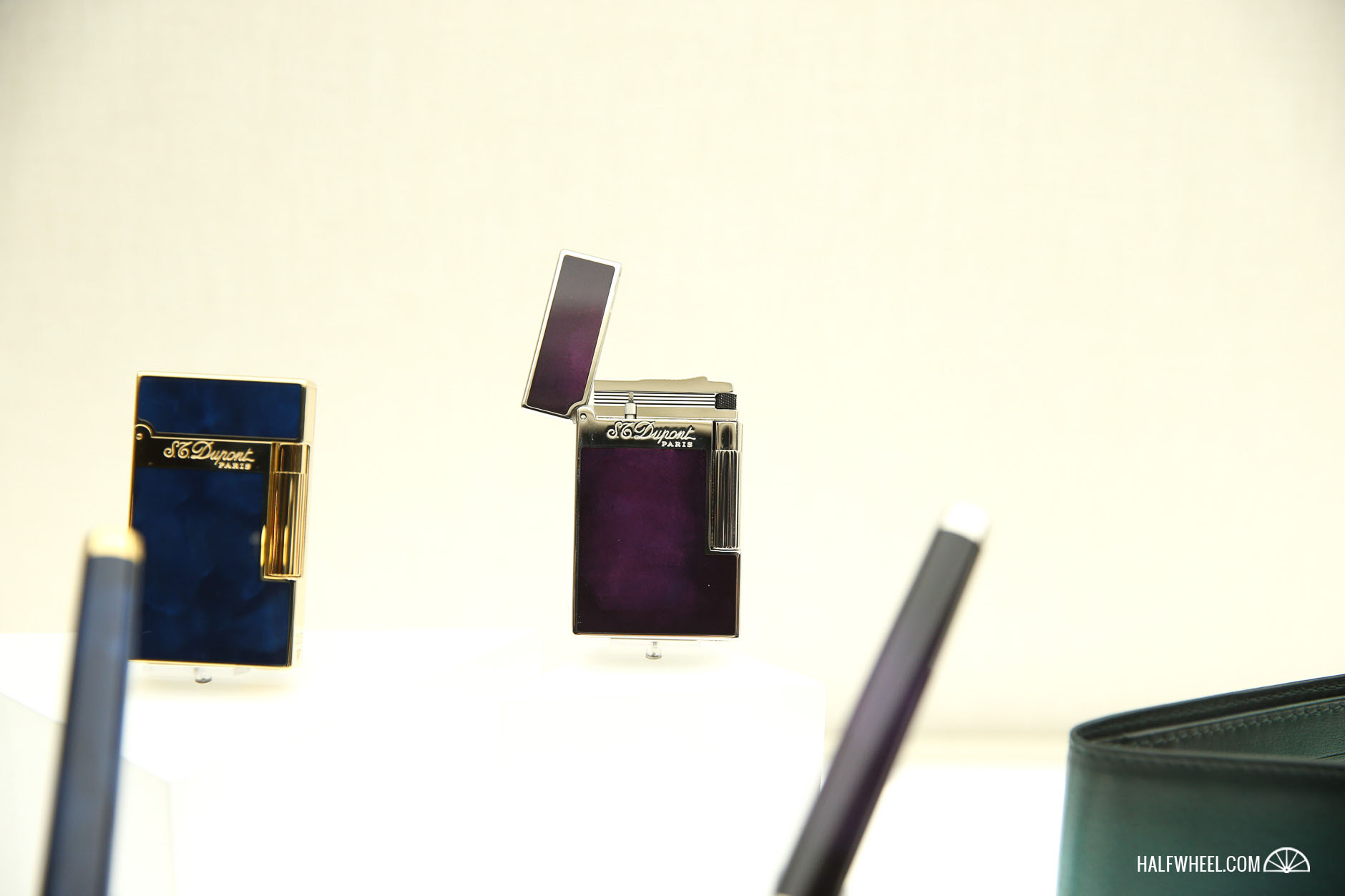