Prometheus’ booth was in a good traffic area, right next to a main aisle, and as usual the company’s products caused many people to stop and check them out. Prometheus does things nice–really nice--and there were some pretty spectacular things on display this year. Of course, they came with signs that read Please do not touch the humidor, ask for assistance, which people promptly ignored and started touching and opening. 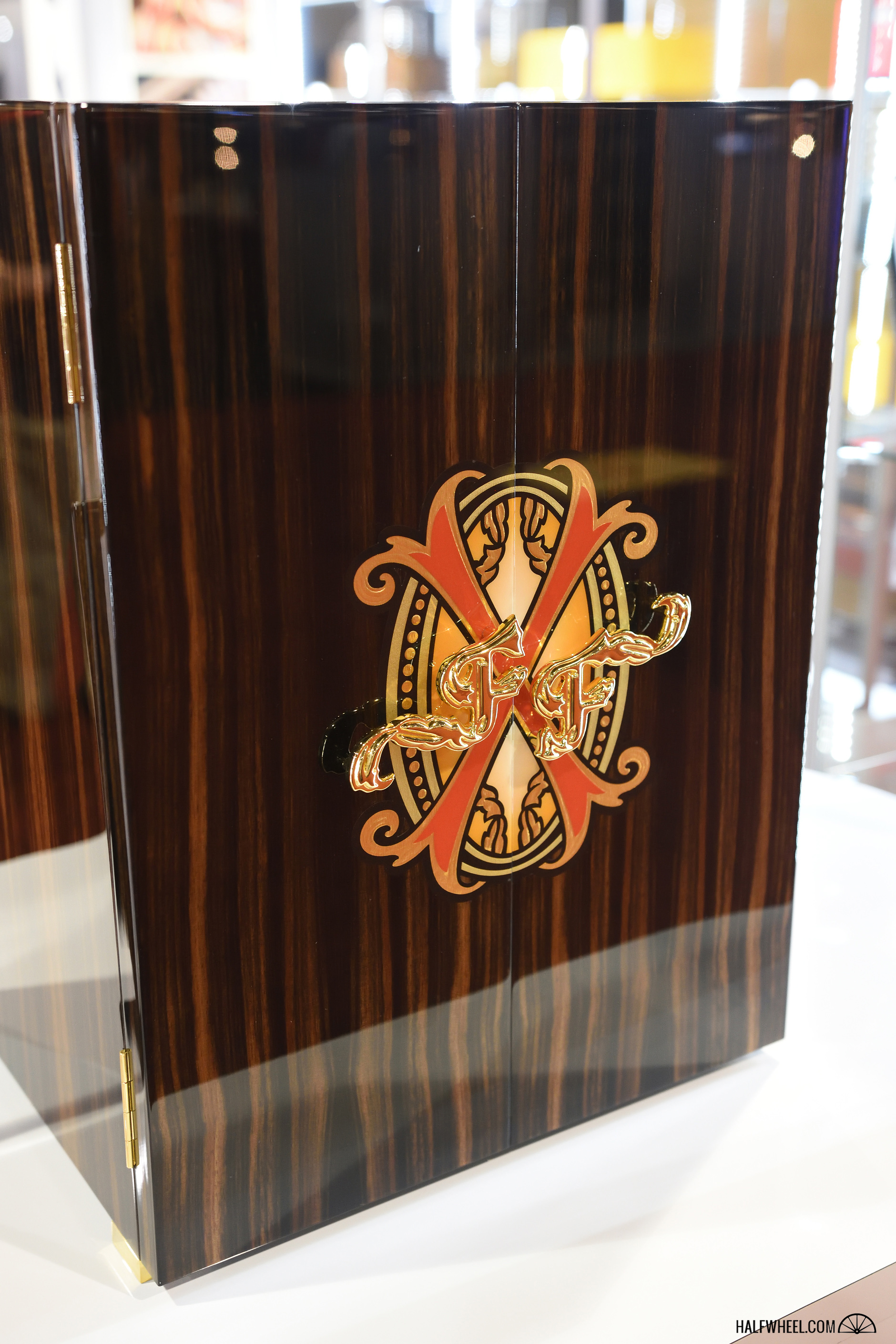 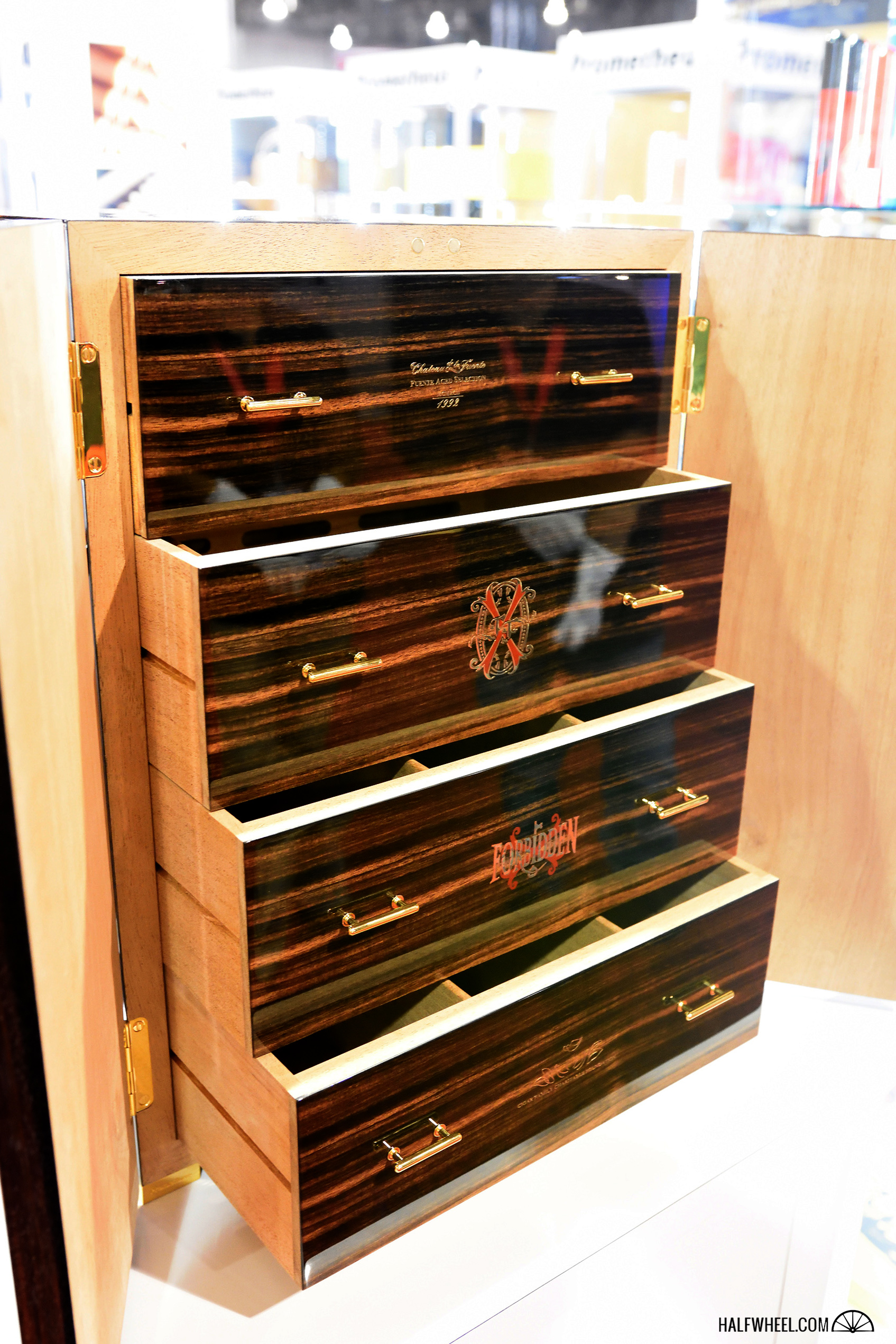 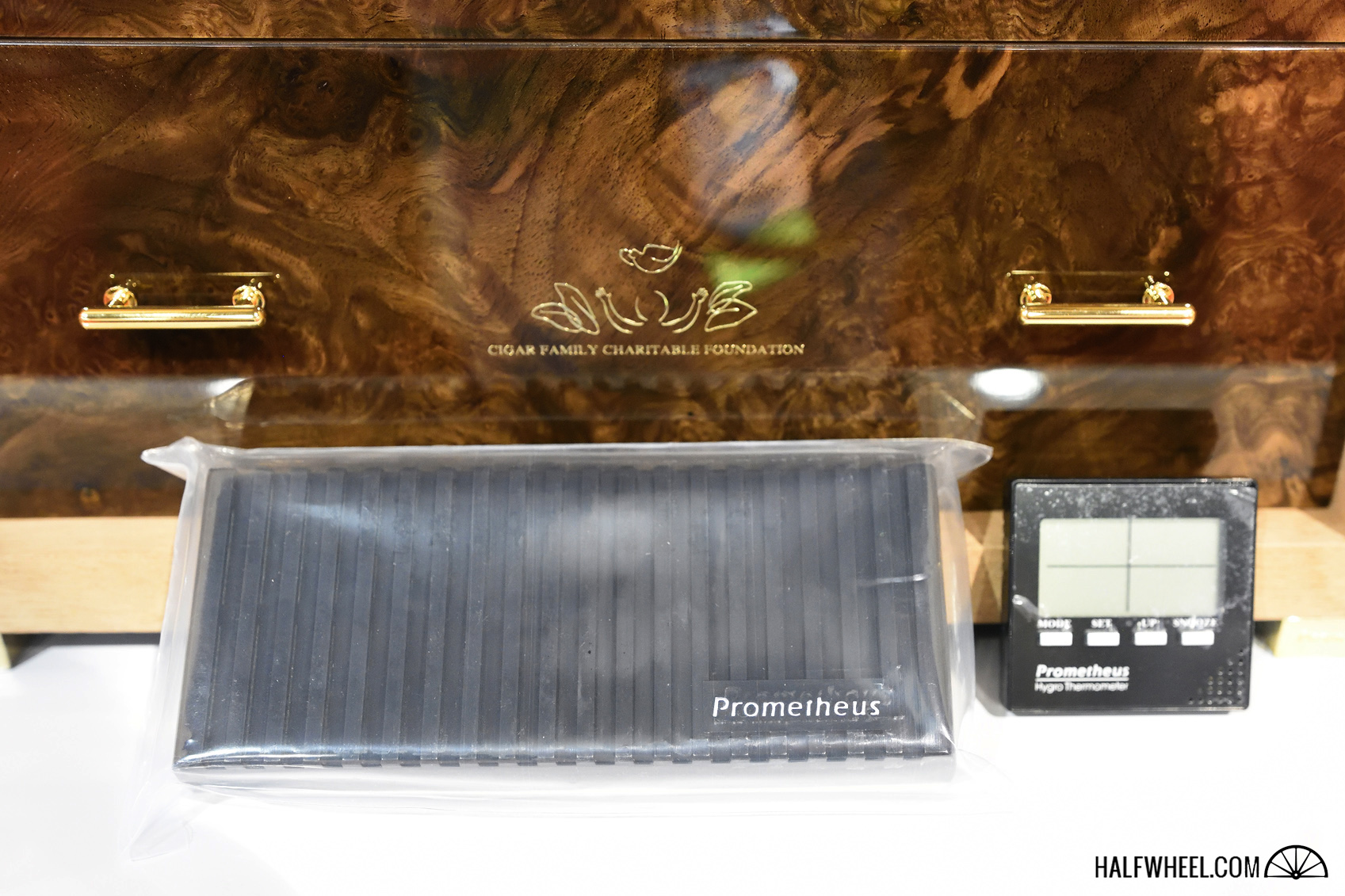 The big item this year–literally, as it weighs in at right around 42 pounds–was the 2016 Limited Edition Fuente Fuente Opus X Story Humidor. They come in three different finishes, Macassar Ebony, Red Sycamore and Walnut Burl, and will be limited to 25 pieces per finish. It holds 360 cigars and comes with 100 rare vintage Fuentes and has slots in each of the four drawers for Prometheus’ humidification system. It will retail for $10,000 and will be shipping in November. 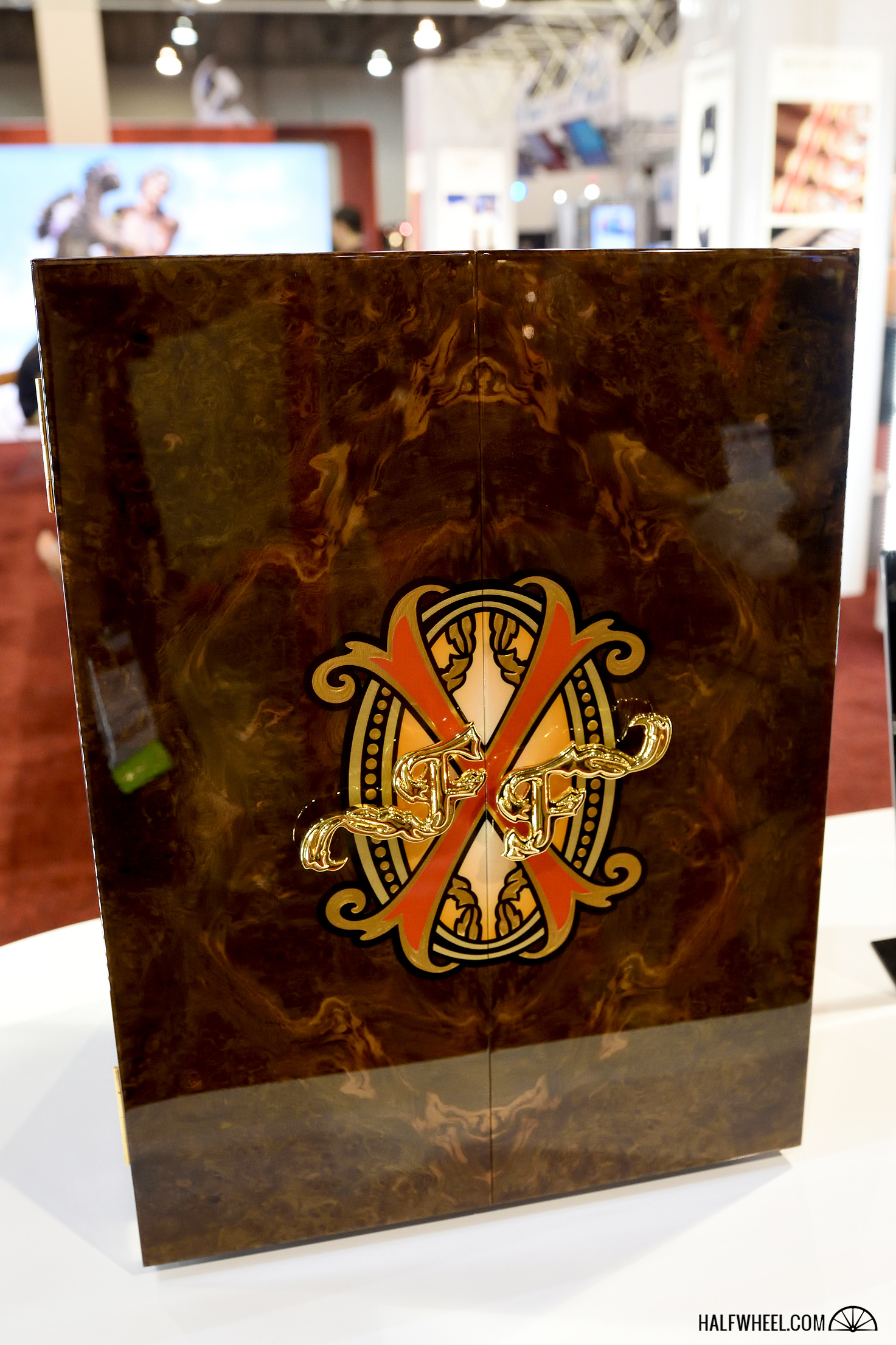 They were particularly proud of the this version of the Walnut Burl, which featured a gorgeous diamond pattern that was replicated on the front, side and top. This was possible as the wood veneer used were all corresponding pieces, tying each side together for a matching pattern. 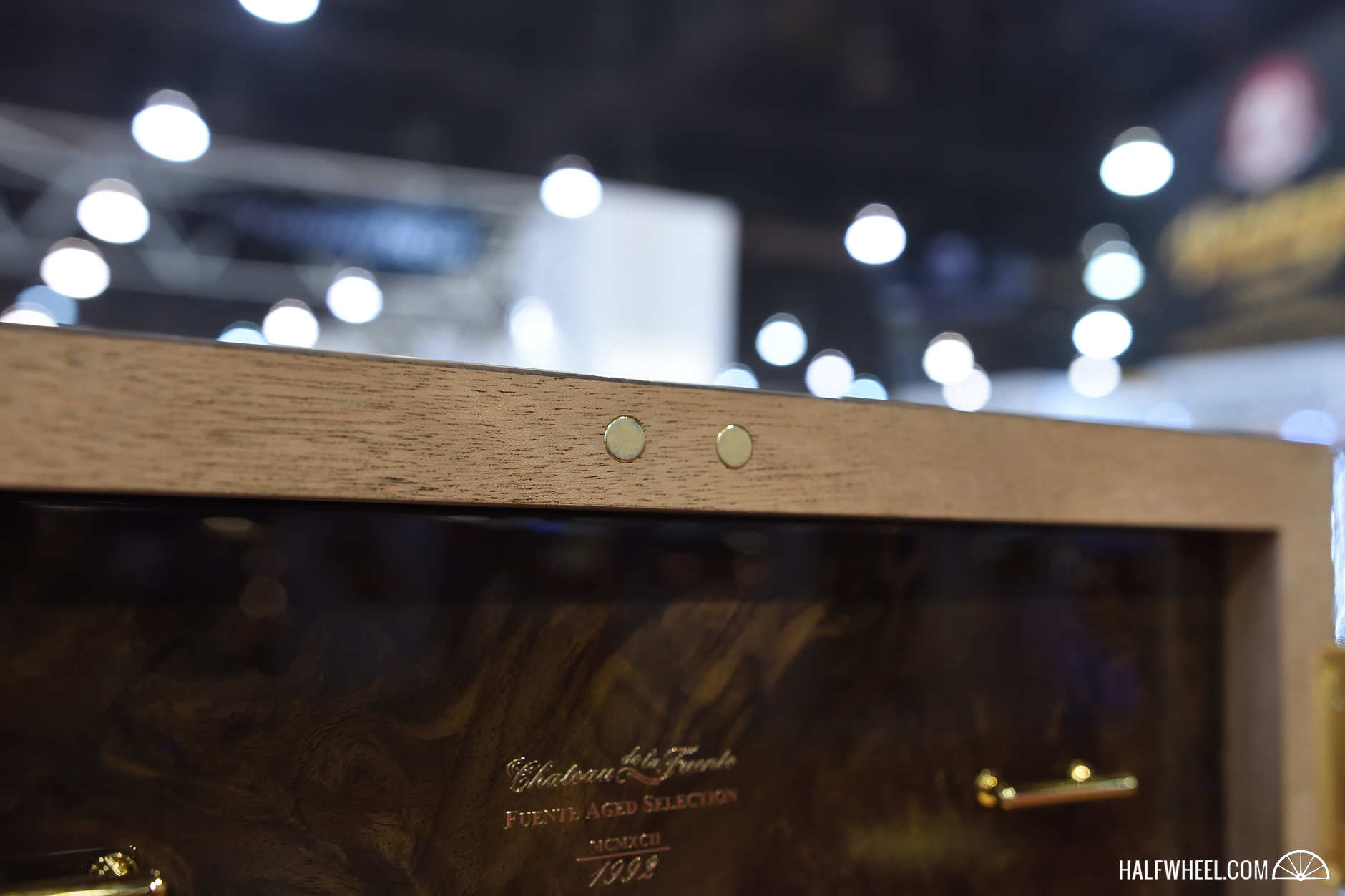 Even the little details were well done, with magnets to keep the doors closed securely and the company’s logo stamped on the feet of the humidor. The 2016 version of the FFOX 6 Travel Humidor will come in four finishes: Macassar Ebony, blue, yellow and red. All four versions will have three of the same cigars: the FFOX King Power, FFOX Taurus the Bull and Don Arturo Gran AniverXario Toro, but each color option gets its own selections as well. The Macassar version will also include a FFOX Tiger Shark, FFOX Lancero and FFOX Love Affair, while the blue, yellow and red versions will have a FFOX 13 Belicoso, FFOX Oro Oscuro Churchill and an Angel’s Share Churchill. They will all retail for $260, with 500 of the Macassar produced, 350 of the blue and yellow produced, and 300 red versions produced. The last of the new Fuente accessories are done in the new black matte finish. The Ultimo X Forbidden X lighter will retail for $89.95 and the Cutter H Fuente Fuente Forbidden X cutter retailing for $79.95. Each of the new black matte finish accessories have a corresponding black leather protective case offered as well, with the Magma T case retailing for $15, the Ultimo X for $12, the Retro for $10 and the Cutter H for $12. New this year are two additional finishes for Prometheus’ leather pocket cases, in tejus leather and carbon fiber. Both cases retail for the same price, the two cigar case for $110 and the three cigar case for $125.