Too much. In a year were many manufacturers made it very clear they were aware of the amount of new releases collectively, Miami Cigar & Co. and La Aurora seemed to have missed the meeting. Jason Wood explained that it was the first time where La Aurora had offered a plethora of new releases, but someone should have drawn the line somewhere. There were new releases from the Dominican Republic, Nicaragua, Honduras and the Miami. Details of all that and more, after the jump. José Blanco
The cigar industry’s librarian returned from vacation for the final rendition of his famous La Aurora blending seminar and stayed for the first few days of the trade show, although left notably early. What’s clear is that at 61, José is far from done with tobacco. A handful of manufacturers inquired about where I thought José would end up (including José himself) and I don’t really have much of an answer. At this point, “if” is no longer a question, it’s about “where” and “when.” Humo Jaguar
Simple black bands with the Honduran Cigar Festival logo on it. Interestingly, I asked a rep from Rocky Patel, who is the normal recipient of Plasencia’s cigars, and they had no clue about this. In case you forgot what I said earlier:

Most interesting is the Humo Jaguar, a partnership between Miami Cigar & Co. and Plasencia. Humo Jaguar is the name of the Honduran cigar festival that took place earlier this year in mid February. All of the participating factories in the Honduran cigar festival (which include Flor de Selva, Rocky Patel, Flor de Copan, Plasencia Cigar, Camacho, Raíces Cubanas, Altadis and General) were given an opportunity to create an entry into an inaugural cigar of the year competition. The blends were judged by a panel over the course of five days and the panel selected a winner. (I should note, it appears that not all of the festival manufactures partook.) Whatever the case, Plasencia won. The cigar will be offered in three formats: Robusto, Belicoso and Gigante (6 x 60). Jason Wood of Miami Cigar had this to say about the cigar, “I was really surprised by this cigar, very full-flavored and strong as (redacted) too.” (The press release can be found here, the translation isn’t great though.)

La Aurora 107 Maduro
The plan is still for these to be out in October, the word from the La Aurora side of things is that these are still not ready. La Aurora (Cameroon) It’s the blend known simply as “La Aurora” and it has been reblended. The slightly stronger version is available only to B&Ms.

La Aurora Corojo
The new packaging looks nice, the real question is whether they changed the blend, as the one from last year was quite good. There were no plans on any sort of blend change, but you know, mind games. La Aurora Puro Vintage 04
The next Puro Vintage, perhaps this gets more traction than the original. La Aurora Preferidos Gran Reserva
These are supposed to be quite good and I believe the allotment sold out, but I could be wrong on this one.

La Sirena “A”
I guess it should be called the “Arielle” because that’s what the box says. (It was supposed to say “A”, but let’s not get anyone fired.) These are limited to 1,000 boxes at 9 1/4 x 48 and have been available at a few (less than five) shops around the country before the show, including Tobacco Plaza, the shop owned by co-brand owner Arielle Ditkowich’s father, Danny Ditkowich. The new La Sirenas are supposed to be getting a second band, which is a smaller and simpler band, as opposed to the intricate monstrosity that many have become familiar with. León Jimenes Prestige
This is perhaps the most important of al of the releases, as it could set the stage for the reintroduction of the León Jimenes blend in the United States. The packaging is at least a step in the right direction. 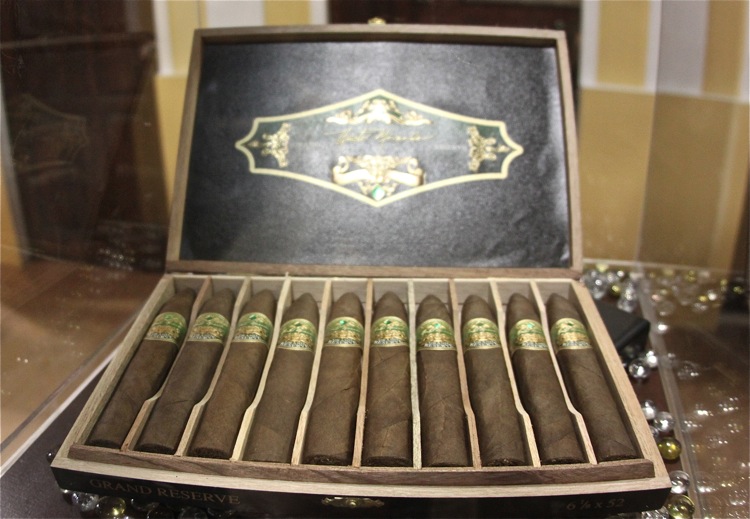 Nestor Miranda Gran Reserva
The limited edition is apparently (according to Nestor Miranda) limited to 1,900 boxes, as opposed to 1,000 boxes that Miami Cigar originally claimed.

In addition, there were two Tatiana releases and at least two extensions that were ready for the show, although it didn’t seem like they were shown off. 2011 has already been a historic year for La Aurora, which saw the departure of José Blanco, one of the most beloved figures within the industry. For Miami Cigar & Co., 2011 has quietly already been a big year as they let go of the Poehler family, who had repped Miami Cigar & Co. for over two decades in Texas, Kansas, Louisiana and numerous other states in the region, replacing them with in-house rep Raphael Delgado. Rene Castaneda returned to New York after three years in Miami in a move that leaves room for speculation, and this could just be the beginning of even bigger changes at Miami Cigar & Co. — el niño diablo.