This year, Illusione celebrated the 10th anniversary of its Epernay brand with a special cigar, but there was also another decade milestone for one of the brand’s lines: Singularé.

Singularé is Illusione’s annual limited release, a collection of different sizes and blends. Dion Giolito, Illusione’s founder, has said that he likes to focus on a specific tobacco or farm for each release, though he’s been increasingly coy on what specifically is the star of the show in any given year.

While this might mark the 10th year of Singularé, it’s only the ninth release as there was no cigar for 2017. 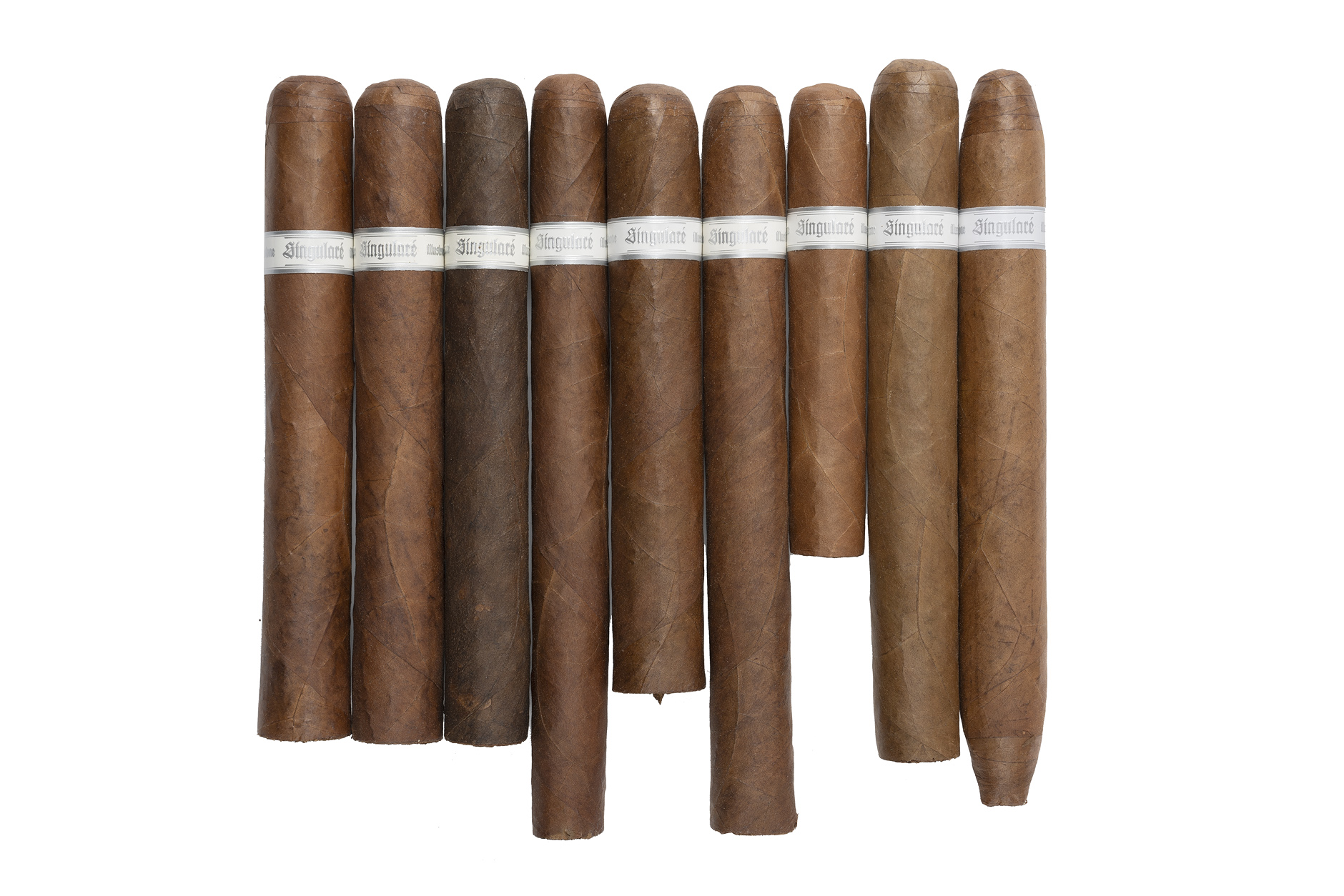 Like many Illusione releases, the name has biblical roots, specifically Revelation 5:6: 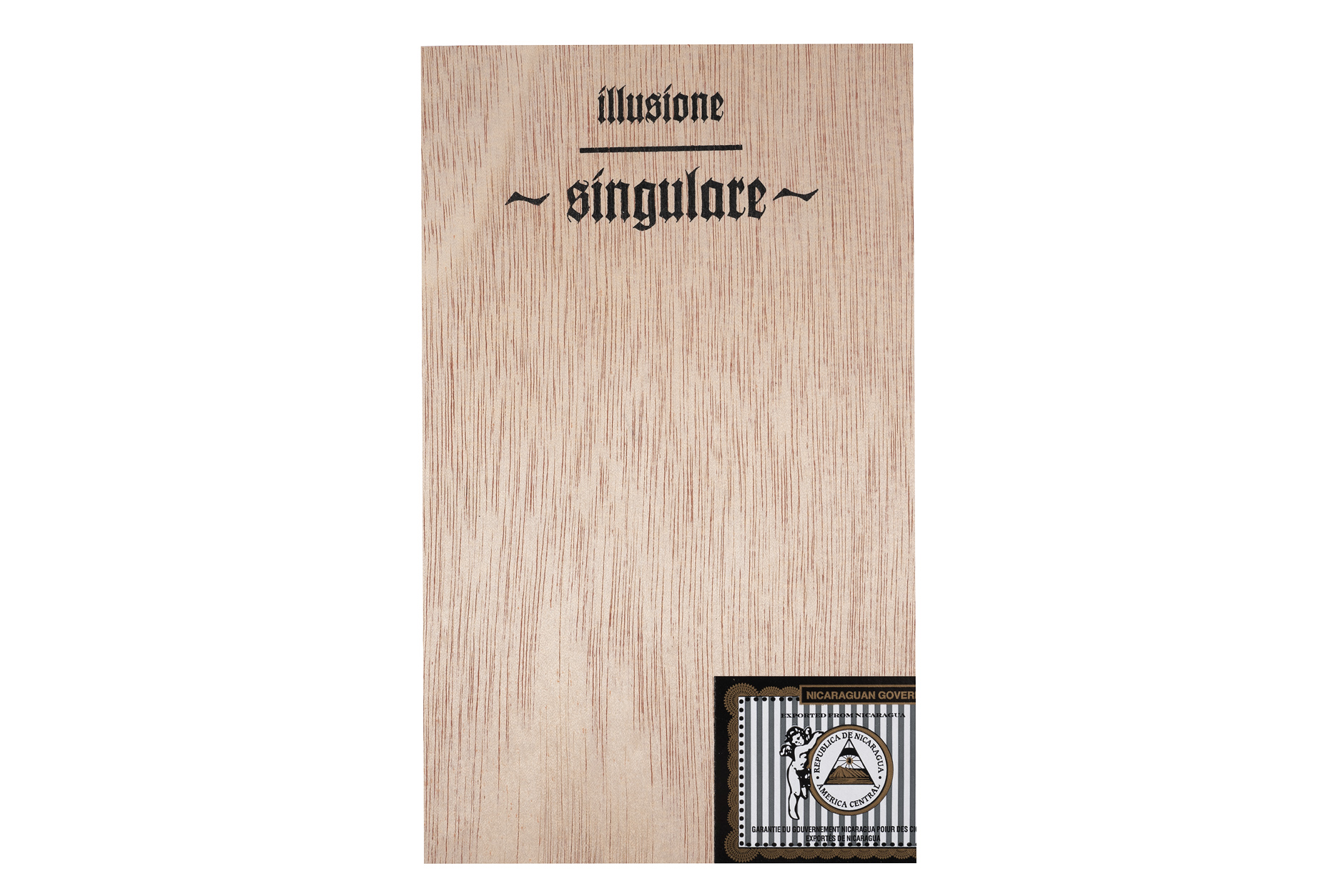 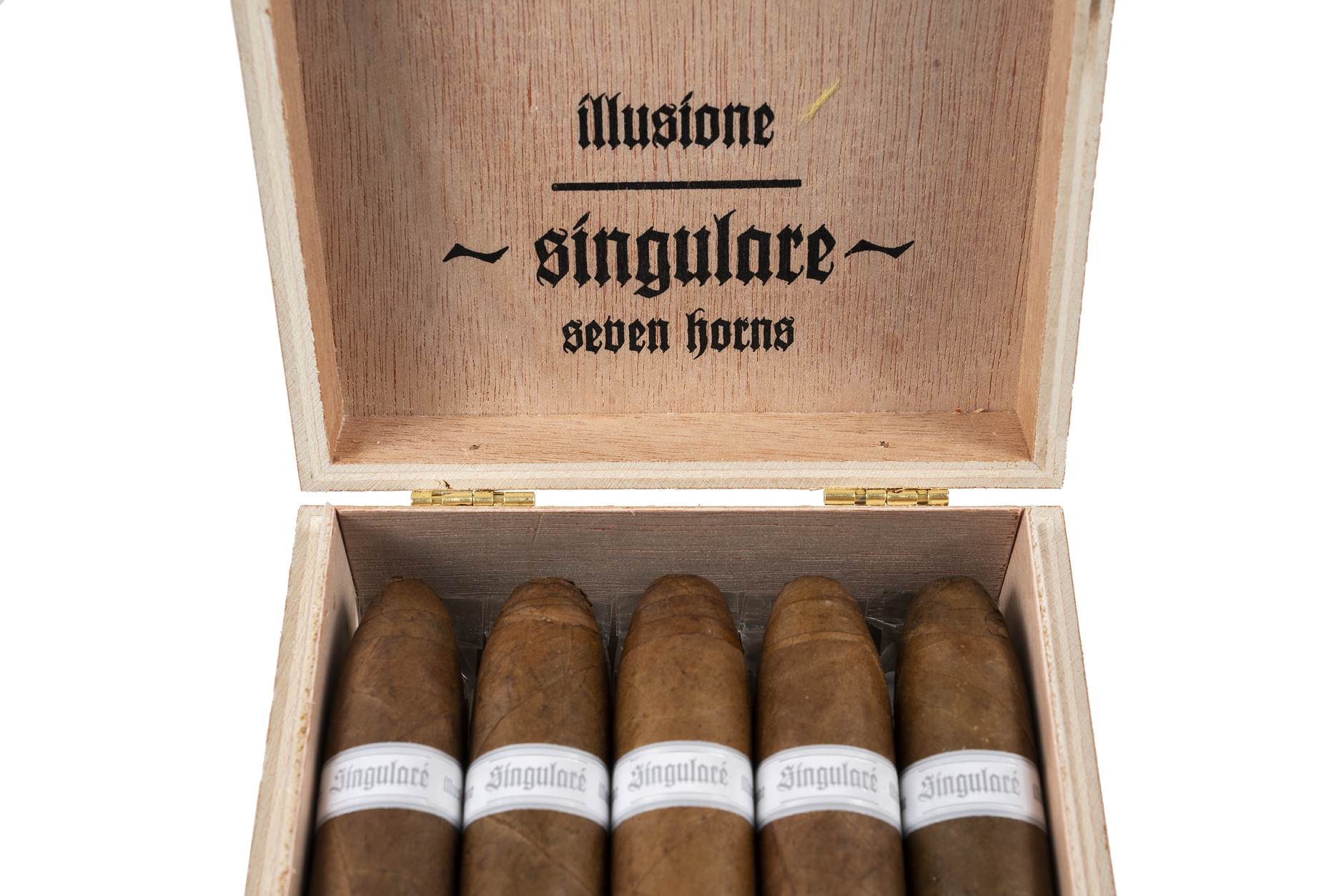 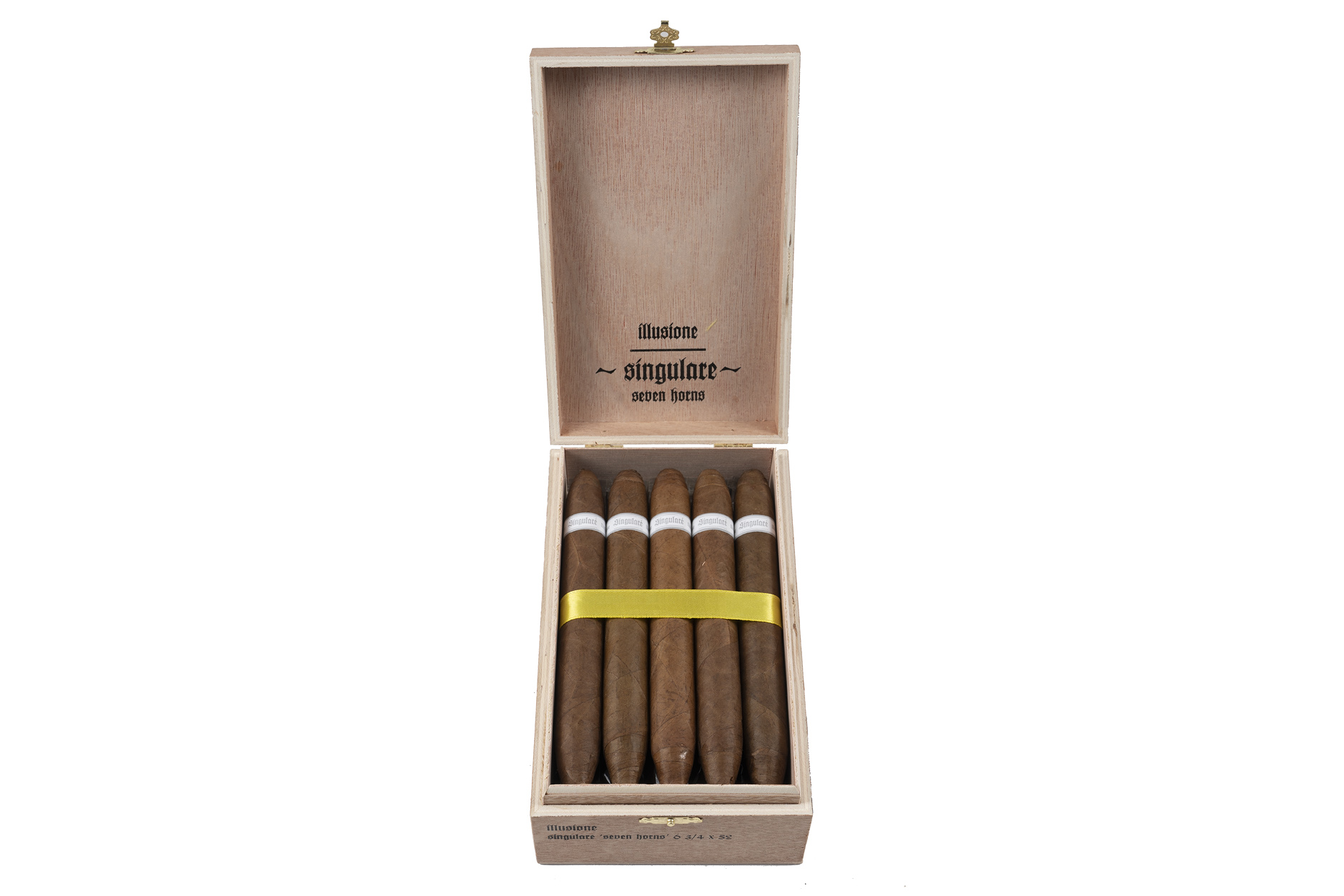 As for the cigar, it’s a Nicaraguan puro made at the Tabacos Valle de Jalapa S.A. (TABSA) factory in Estelí. Giolito says that the production is limited to 500-700 boxes, all depending on the supply of tobacco.

Of note, this is the first time that Singularé has been in a non-parejo size. 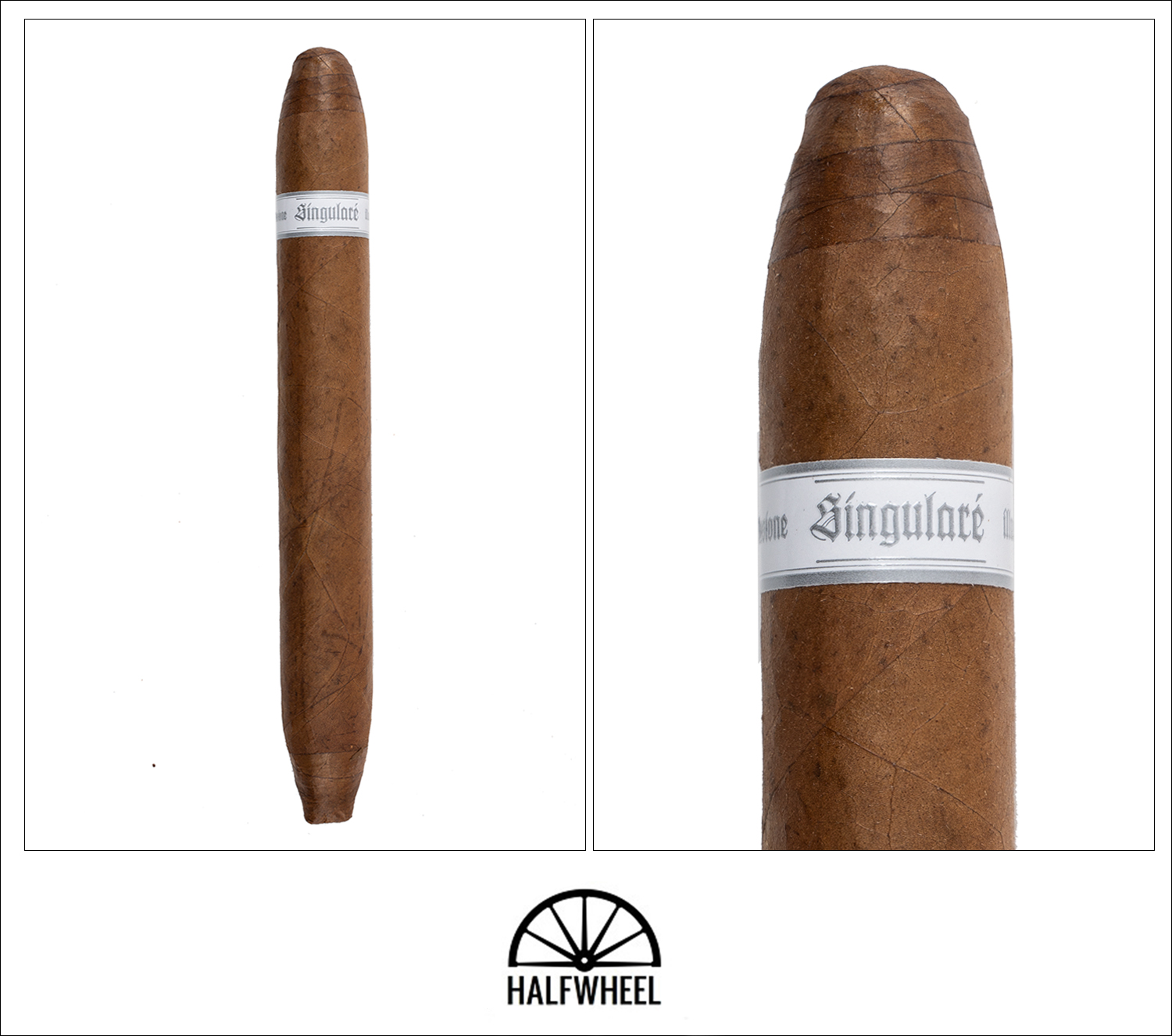 This isn’t the prettiest Illusione wrapper I’ve ever seen. It’s not ugly, but if you are hoping for some of the super red corojo rosado wrappers that AGANORSA uses, this isn’t it. Once out of the cellophane, I pick up some berry fruitiness and a touch of bark, but not much else and only mild to medium. The foot is medium-plus with creaminess, milk chocolate, an almost plain bagel-like bread flavor and some raw pasta smells. The cold draw has white pepper, onion bagel, paprika and Persian limes. It’s super compact—difficult to find anything really standing out—and around medium-full.

Seven Horns begins medium-full with a deep dough flavor, some Sprite sweetness and an earthiness, around medium-full. After the initial puff, my attention turns to keeping the cigar lit through the end of the perfecto tip. It’s pretty clear that the cigar needs a bit quicker puffs until it’s reached the end of that phase, otherwise you will quickly need to relight it. Fortunately, I avoid that on each of the three samples. The initial flavor has a super doughy-bread flavor that reminds me of some butter-filled bagel bites, joined by some salty pretzels, pomegranates and nuttiness. The more I get into this Illusione, the more the saltiness cuts through the other flavors. Retrohales have espresso, apple cider and some duck-like meatiness. Interestingly, after a 10-second or so delay, the finish is rather floral. Flavor is full, body is medium-full and smooth, and strength is medium-plus. Construction is great, though the ash is very fragile around the perfecto tip. The second third of the Illusione sees the saltiness leave the profile entirely. That’s for the better in my opinion as it was starting to drown out everything else. Instead, the profile is a mixture of Ritz crackers, leather and some nuttiness. Retrohales have burnt crackers, a thick creaminess, natural wine flavors and when I smoke slower, some lemon. The finish is a mixture of crackers, creaminess and some herbal flavors, the latter of which isn’t my favorite. Flavor and body are both full, while strength is medium-full. One sample requires a touch-up and all three Singularés need a quicker puffing rate or the smoke production drops significantly.

For a little while, the only flavors I can pick up in my mouth are mineral flavors. Eventually, the Singularé opens up a bit and I get some burnt coffee and a gyro meat flavor. The profile is definitely spicier, though it’s not because of an increase in pepper. Rather, there are some raw spices and then other complementary flavors like peppermint that make the cigar seem hotter than it is. With under an inch left, retrohales show a bit of white pepper, joining the paprika, burnt bread and some corn. The flavor finishes full, the body is just shy of that and strength is medium-full. I still need to smoke quicker to keep the Illusione from going out, particularly the middle of the cigar, but one sample needs touch ups throughout the final third to keep the combustion going. 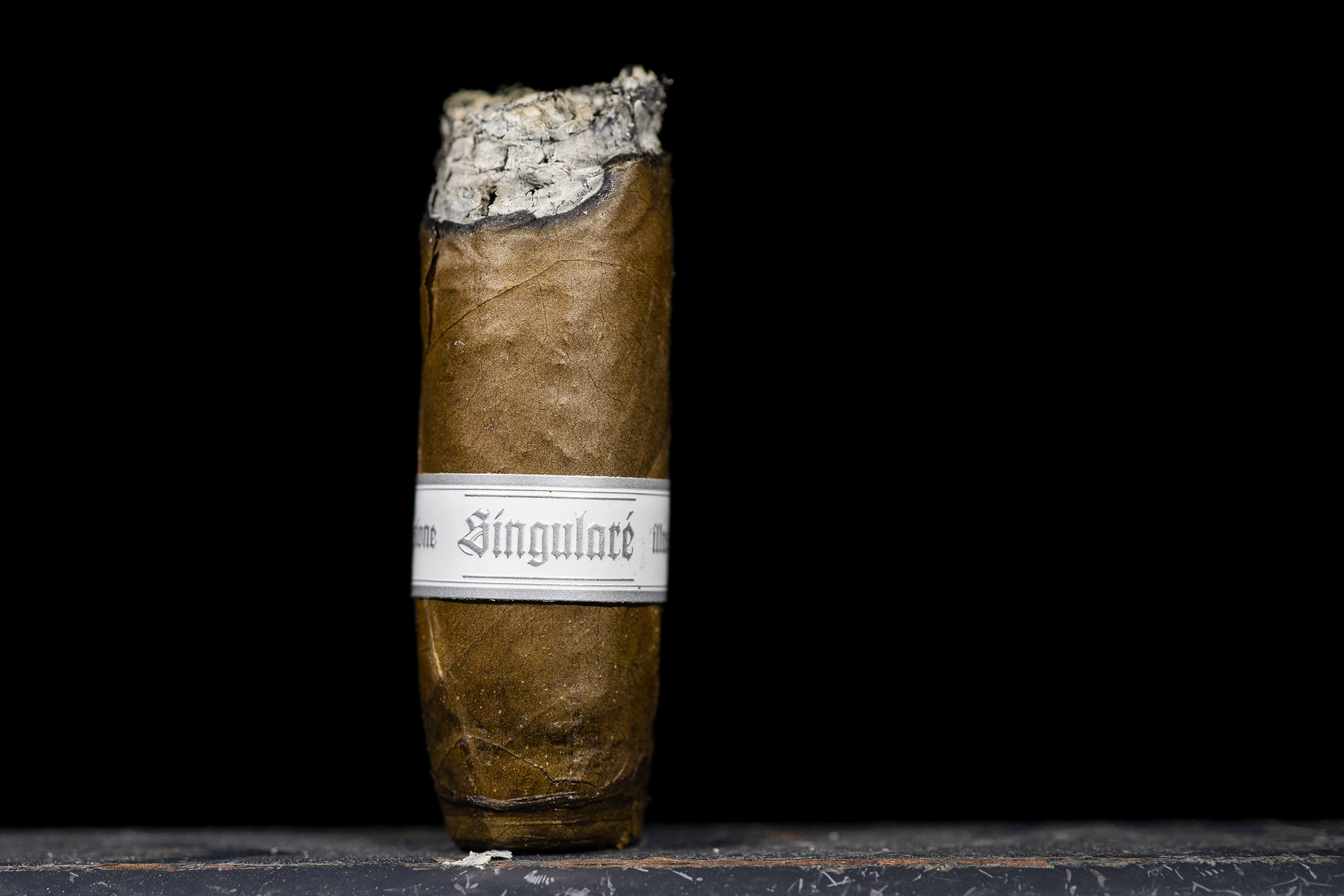 There are times in which the Seven Horns’ blend lives up to the incredible reputation of previous Illusione Singularé releases. Then there are times in which there’s an off-putting flavor, or something that gets too dominant, but one thing is consistent: the construction isn’t great. It’s not overly problematic so long as you have a lighter handy, but I can’t help but think that three cigars I smoked weren’t what Dion Giolito wanted me to smoke. There was the rock hard sample, relights needed on another cigar and all three requiring me to either choose between smoking quickly or not getting much smoke throughout. I try not to put much in the way of expectations for a cigar but the bar for Singularé is so high—and rightfully so—meaning that any imperfections are big ones.