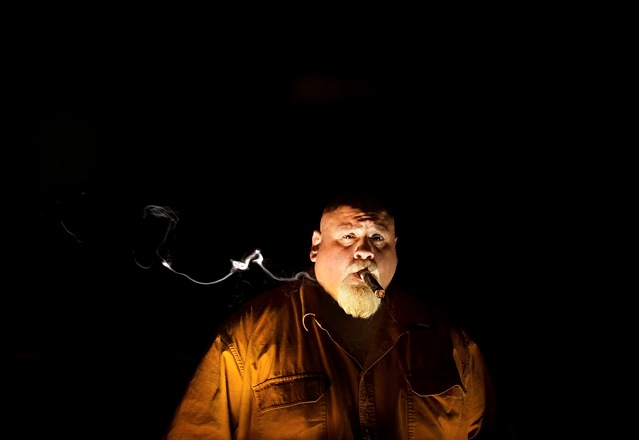 While at the Drew Estate factory for Cigar Safari about three weeks ago, I decided to try and get portraits of all of the major players at Drew Estate for our Icons of Cigars project. They will be running for the next three weeks on Monday.

First up is Steve Saka, President of Drew Estate. Now, I have met Steve multiple times over the years, and have talked to him quite a few times on top of that, but this was the first instance where we had some time to actually get a portrait done. For those of you who have never had the pleasure of meeting him, Steve is the Yin to JD’s Yang — a somewhat serious, matter of fact man who knows his shit forwards and backwards. He is never afraid to tell you his opinion, but also takes any dissenting opinion to heart, which is a rarity among cigar manufactures, I assure you. I knew from the start that Steve really does not like having his portrait taken and I so I wanted to do something a bit different than we have in the past. He had shown us the ring and told us the story about it at some point previous, and I wanted to try and incorporate it into the photograph. While we took multiple portraits and angles and locations, this is the one that I think speaks to me about who Steve Saka is.

Now, some technical details for those of you that care. This photo was taken with a Canon 1D Mark III and 24 f/1.4 lens. Aperture was f/1.4, shutter speed was 1/100 sec and the ISO was 800. The location of the portrait was in the factory after everyone was gone, giving us a totally black background to work with. We realized that light would be an issue, so we borrowed some video lights from Mario from Cigar Explorer. There were actually four different lights used for this photo. Two of them were held by Charlie with one pointed at the ring and one at Steve’s head to give him a little contrast. The other two were sitting on the bottom left on a rolling table, pointed straight up in order to light the smoke coming from Steve’s cigar.