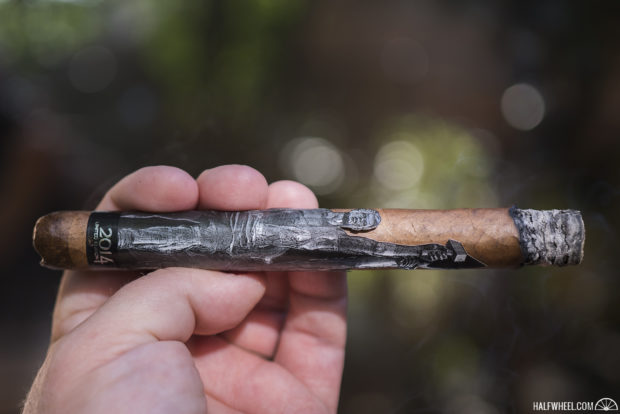 Measuring 6 3/4 x 48, the toro extra vitola featured six different types of tobacco from three different countries, although the exact blend was never disclosed. The cigars were rolled at the Occidental Cigar Factory in the Dominican Republic and was priced at $10 per cigar with a total production consisting of 2,500 cigars packaged in 10-count boxes.

One of the more unique features about the Hammer + Sickle LE14 was the band that covered close to 2/3rds of the cigar running from the foot to the cap. Printed in the form of Rabochiy i Kolkhoznitsa—or Worker and Kolkhoz Woman—the stainless steel statue depicts two figures with a hammer and sickle raised over their heads and was produced to top the Soviet pavilion at the 1937 World’s Fair in Paris. After being shown at the fair, the installation ended up in Moscow where it remains today.

Here is what I said in my original review back in November 2014:

I have not smoked many Hammer + Sickle cigars, but after this one, I will definitely be trying more. The LE14 is a flavor bomb, constantly shifting profiles as it progresses, never giving me a chance to even come close to getting bored with it. After a bit of a problem with the wrapper on one of the samples, construction was wonderful overall, and the smoke production was quite high as well. I wish I know the particulars of the blend, but in the end it did not make much of a difference in how much I enjoyed the cigar, and the price of $10 each is a steal for the combination of complexity and balance this release exhibits. 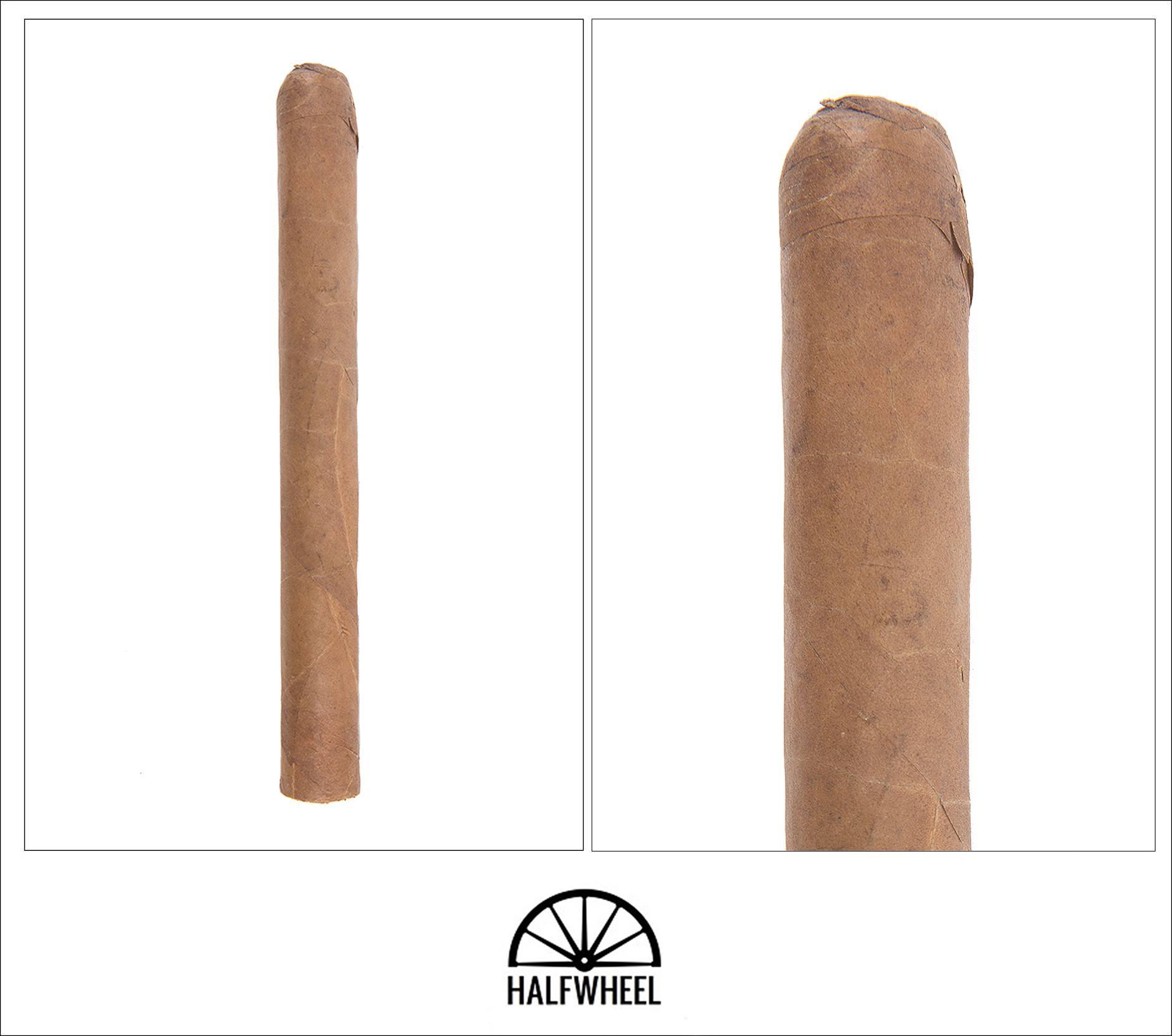 Visually, the Hammer + Sickle LE14  features a golden brown wrapper that is both smooth to the touch and significantly more mottled than I remember the first time around. After removing the band that reaches more than two-thirds up the cigar, there seems to be very little oil present and there is a soft spot about two inches up from the foot. The aroma from the wrapper is a very inviting combination of cinnamon, dark chocolate, cedar, leather and earth, while the cold draw brings distinct flavors of creamy cedar, almonds, leather, hay, baker’s spices, cinnamon and slight sweetness.

The first few puffs of the Hammer + Sickle LE14 inundates me with a distinct, creamy peanut butter flavor, followed by other notes of cinnamon, cedar, sweet floral, roasted coffee beans and hay. There is a bit of white pepper on the retrohale ad some spice on my tongue, but both seem to be receding as the first third burns down. There is an interesting mint note on the retrohale as well that combines nicely with a wonderful maple sweetness that is also present, both of which stick around throughout the entire smoke. The second half features the same creamy peanut butter as the dominant flavor, but adds a distinct cedar note that becomes quite pervasive in the final third, setting off the sweet floral flavor that has also increased in strength. 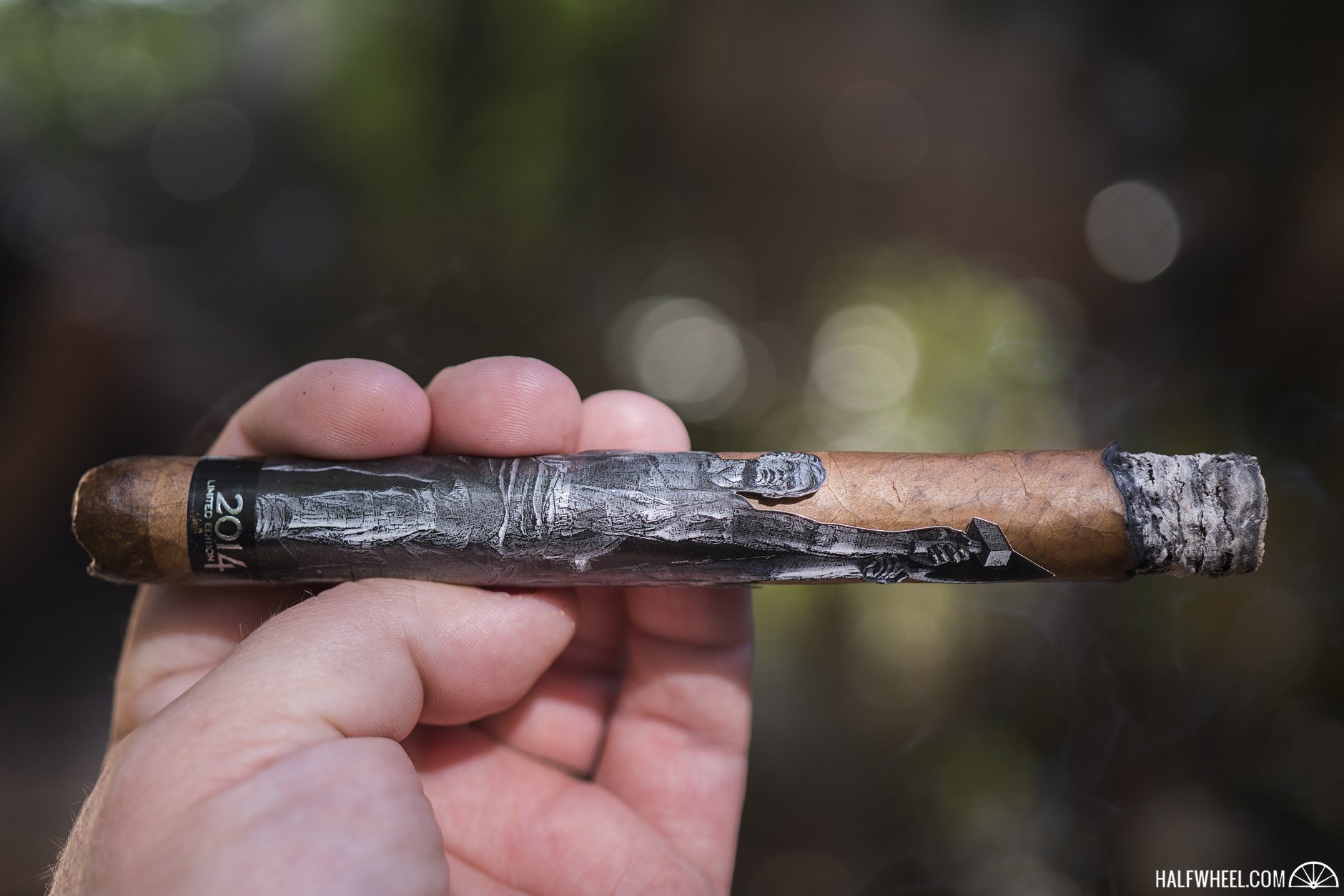 Construction-wise, the draw is excellent throughout the cigar after a simple v-cut and while the burn wavered a bit at various times, it never came close to needing to be touched up. The overall strength increased slowly, hitting the medium mark just past the start of the final third but never threatened to go any further, and I put the nub down after one hour and 48 minutes of smoking time.

Every year there are cigars that skim under the radar for the vast majority of the smoking public, sticks that should have garnered more press and more praise than they received. In my opinion, the Hammer + Sickle LE14 is an almost perfect example: the profile is extremely flavorful, wonderfully constructed and features excellent balance, but that vast majority of people have never heard of it, much less smoked it. There are some significant differences between the profile compared to the first time I smoked it—the citrus note is gone, replaced by a creamy peanut butter flavor that remains dominant through the entire smoke—but this is a blend that still has quite a bit left in the tank after four years of age and will continue to morph as the years pass.