In late 2014, Hirochi Robaina—grandson of the late Alejandro Robaina—debuted his non-Cuban cigar blend to the U.S. market. Named H.R. Habano, the line debuted in four different vitolas that were produced by Omar González-Alemán, another famous Cuban cigar maker who once run the massive La Corona factory in Cuba.

In September 2015, Omar González-Alemán filed a lawsuit against the Mederos family, owners of the Cubanacan brand, which was serving as the distributor for the H.R. line.

While that lawsuit was eventually settled, the H.R. brand eventually landed at White Hat Distribution, a distribution company started by former Cubanacan vp of sales Spence Drake. In addition to two new blends under the H.R. brand—H.R. Claro and H.R. Blue—there were two new vitolas of the original H.R. Habano that were launched at the 2016 IPCPR Convention & Trade Show: the 9 1/4 x 47 H.R. A and the 5 x 42 H.R. Corona. As with the rest of the H.R. Habano line, the new  A features the same Ecuadorian habano 2000 wrapper covering a Nicaraguan binder from Jalapa as well as Nicaraguan tobacco in the filler. The cigars are being rolled at the González’s new La Corona Factory in Estelí, which is housed in part of the former NACSA factory.

The As are packaged in two-packs of wooden coffins that retail for $70, or $35 for each cigar.

There are now six different vitolas in the H.R. Habano line. Being an A, more formally a gran corona vitola, the newest H.R. Habano is obviously quite imposing, with a dark mocha brown wrapper that is silky smooth to the touch. The cigar exhibits very little oil and is quite spongy when squeezed, and the covered foot is a nice visual touch. Aroma from the wrapper is a combination of dank oak, earth, anise, tobacco, leather, manure and peanuts while the cold draw brings flavors of anise, dark chocolate, leather, creamy cedar, black pepper and a touch of vanilla sweetness.

Even with the covered foot the cigar lights easily, starting off with a very distinct creamy leather as the dominant flavor, followed closely by lesser notes of tobacco, herbs, earth, citrus, roasted nuts and dark chocolate. There is a substantial amount of black pepper on the retrohale as well as some very obvious spice on my tongue, and while I am tasting some indeterminate sweetness, so far it is overwhelmed by the aforementioned black pepper. The draw is excellent from the start, even with the covered foot, and while the burn is a bit wavy, it is far from needing to be touched up. Smoke production is massive and dense off of the foot, and the overall strength takes off like a rocket, ending the first third firmly in the medium range. Thankfully, the black pepper on the retrohale calms down quite a bit in the second third of the H.R. Habano A, allowing more sweetness to enter the profile, strongly reminding me of vanilla beans. The dominant flavor has shifted to more of a roasted nut note, followed closely by other flavors of hay, bitter espresso, oak, cocoa nibs and slight orange citrus. While the draw continues to impress, the burn has gotten a bit out of hand, forcing me to touch it up, albeit only once. The smoke production is still through the roof. Strength does not increase nearly as much as it did in the first third, it ends the second third just north of the medium mark. 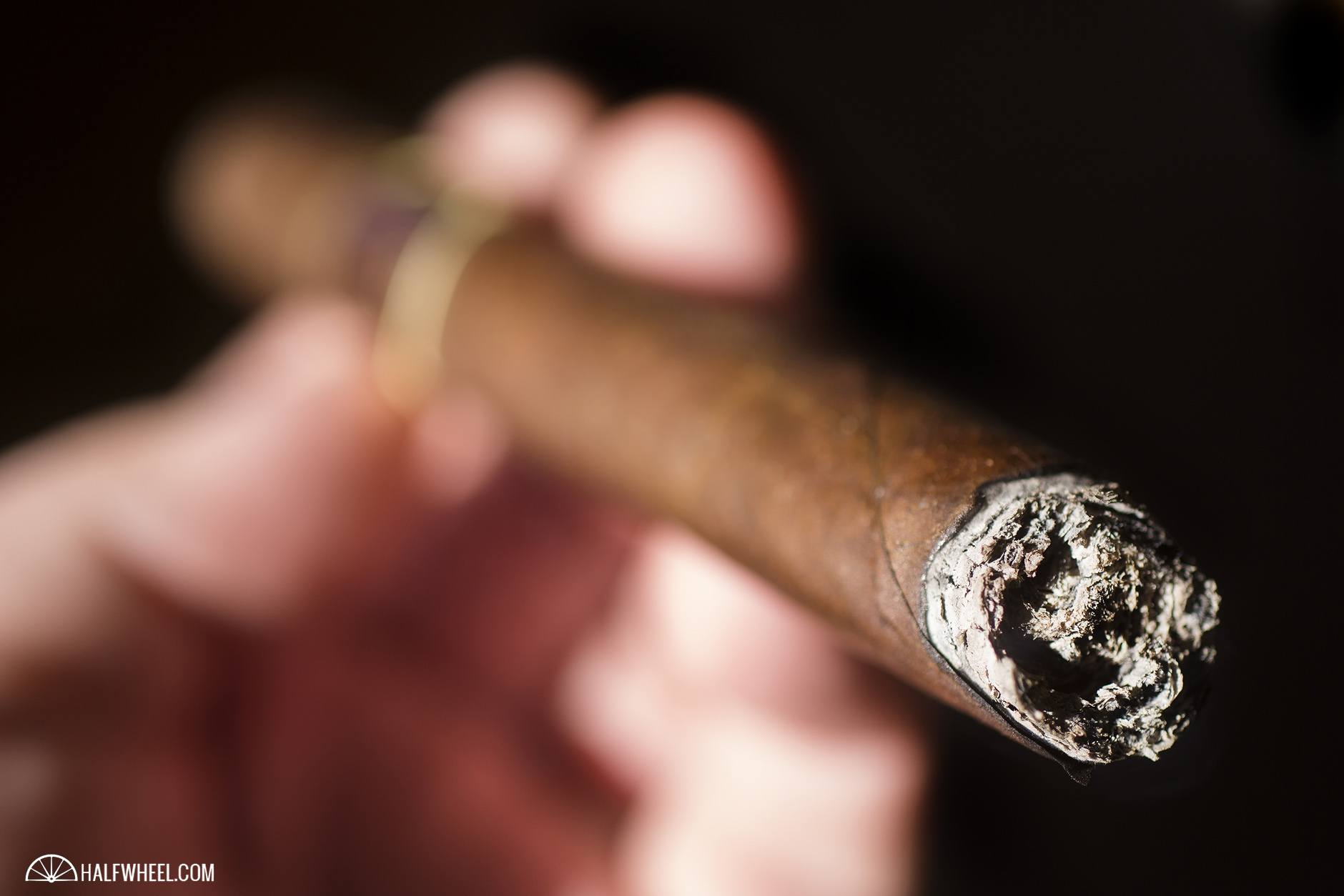 The final third of the H.R. Habano becomes a bit muddy flavor-wise, with a return to a dominant leather note and less distinct flavors of earth, oak, dark chocolate, grass and a touch of floral. The vanilla sweetness that was so prevalent in the second third has all but disappeared, taking much of the complexity in the profile with it. Construction-wise, the burn has evened up nicely and continues to impress until the end of the cigar, while the draw is as good as ever and the smoke production remains quite high. The overall strength does increase slightly, but seems content to remain where it is more or less, and ends up just north of the medium mark by the time I put the nub down with a little less than an inch to go. The gran corona vitola has never been a favorite of mine, as I find that that they tend to become fairly monotonous by the time the cigar finally comes to an end, and that was the case with the H.R. Habano A While the profile of the cigar is quite enjoyable during the first half, the overall experience is brought down a bit by the final third, which becomes dull early on and remains that way until the end of the cigar. Having said that, the construction was excellent overall, and the flavors and strength are balanced nicely throughout. A good cigar to try if you are looking for this specific size and don’t mind paying a premium for the name, but don’t expect mind-blowing complexity.